A Series of Unfortunate Events was never going to give us a fairy tale ending. The narrator, Lemony Snicket (Patrick Warburton), has told us that repeatedly, as did the theme song, which changed depending on the pair of episodes but always kept its core message: ‘Look away because this show is going to wreck your day’.

It’s intriguing, then, to dissect why we kept watching. Are we experiencing schadenfreude? Considering this show focuses on the plight of children, feeling joy at their misfortune seems unkind (and unlikely). When we compare it against other films that explicitly advertise drama and sadness, it seems inadequate and odd.

That’s what differentiates this drama from others; the premise is so absurd that we, against all hope, have become optimists while watching it. Unlike other movies or shows, where you walk in knowing it’s going to be depressing and expect it to end that way, A Series of Unfortunate Events is constructed and presented in such a way that it becomes impossible not to smile at the ludicrous situations the Baudelaire children become trapped in. They’re still terrible situations, but the whole thing seems like such a farce we were never sure if it would stick to its guns or reveal everything to be a huge prank. 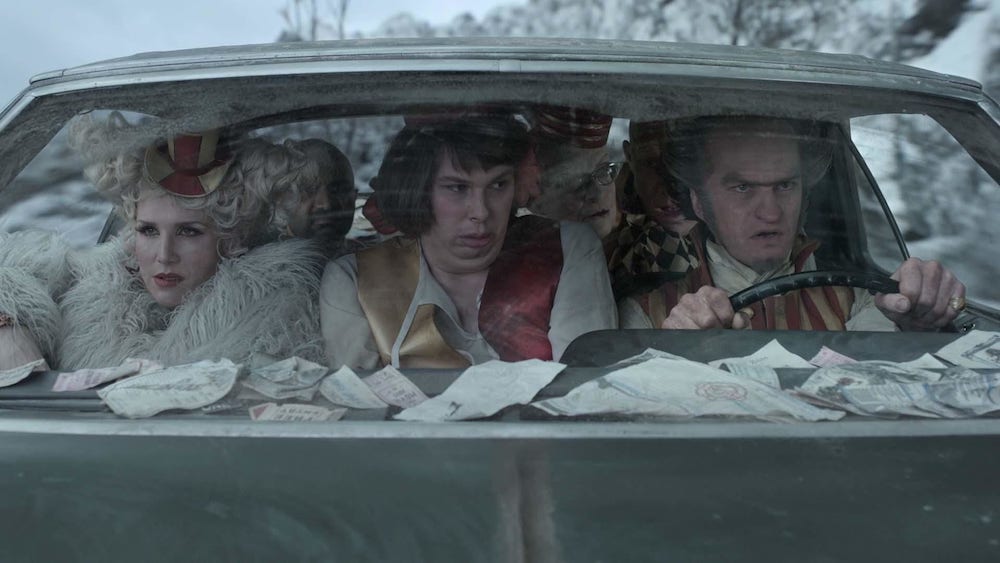 Those who’ve read the books know that the written ending is deliberately ambiguous. We don’t actually know what happens in the end. In this TV adaptation, however, showrunner Barry Sonnenfeld and author Daniel Handler have accomplished that rare feat: they’ve given us an unambiguous ending without compromising the core themes of the show.

But let’s go back to the plot. The last we saw Violet (Malina Weissman), Klaus (Louis Hynes), and baby Sunny (Presley Smith), they’d become separated, with the latter kidnapped by Count Olaf (Neil Patrick Harris) and his motley crew. These last seven episodes adapt the last four books in the series, splitting them into a trio of two tales with a final episode entitled ‘The End’.

I’d be remiss if I didn’t mention the spectacular cast again. This is still one of the best groups of actors I’ve ever seen in a TV series. So much of the recurring cast reunite with the orphans this season, and it’s a credit to them that we’re excited to see them again, but sad others weren’t included. They’re helped by the cinematography and direction, which gives each of them their moment to shine even when sharing the screen with another actor (which is often, given there are at least 15 characters now). There’s no need to chew scenery when everyone stands out. 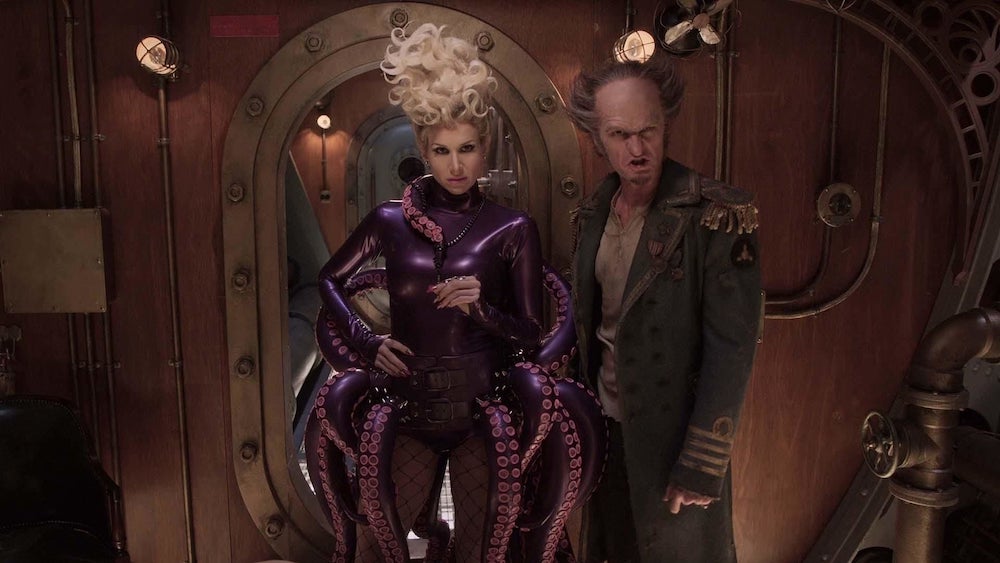 In terms of the plot, I mentioned it would be tough for Unfortunate Events to tie up every loose end in seven hours. After all, we knew next to nothing about secret organisation VFD and the many volunteers the Baudelaire orphans have met. We didn’t know why Lemony Snicket was even in this story and, most importantly, we didn’t know why everyone was looking for a single sugar bowl.

It’s to the credit of the writers that the pacing of season 3 never seem frantic or rushed. The season starts slow, introducing new characters one by one without forgetting about the returning characters. As the series hit its final leg, especially in the “Penultimate Peril” couplet, the action was ramped up dramatically and delivered many jaw-dropping reveals. Every frame was used to perfection and only served to hammer home the premise these children could never depend on the adults in the room.

When Count Olaf does his big speech in the courtroom and tears down all the arguments we’ve been believing for the past two seasons, it’s a mind-blowing yet completely logical conclusion fit for our world. At that moment, it’s impossible not to transpose his arguments to the unstable world we live in: one where justice and nobility are under attack and where being ‘innocent enough’ is not, in fact, enough. This is a triumph for a series that has only 45-minutes per episode to go through a large amount of plot; even while set in an undetermined time period, A Series of Unfortunate Events still manages to continue its social commentary on the absurdities of our world. 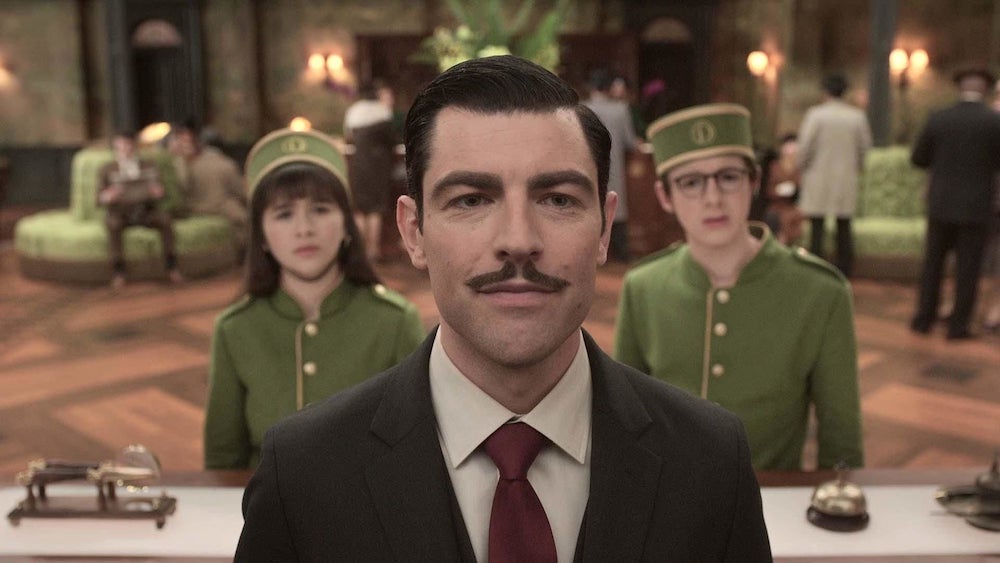 After two seasons of the three kids being our heroes, we spend the last two episodes with the world turned upside down. The show asks ‘is it possible to do an evil thing for a noble reason and feel justified doing it?’ The world is messy and human relationships and motivations are even messier, the series tells us. Nobody is perfect, not even those who have gone through great trauma or made brave, selfless decisions. How do our past decisions then haunt our futures?

Those are big questions, brought up by the series as it muddles its own waters: the event that triggered the schism isn’t as black-and-white as we might have assumed. Bad guys became good guys and vice versa. And even if the events of the schism seem ridiculous to outsiders, the series makes it clear that it has real, measurable, and mostly negative effects on those involved. You can’t help but be upset and afraid at how fragile the entire situation is, and the show keeps telling us that it’s okay to choose the safer option instead, but, as the orphans say, “if we wait until we’re ready, we’ll be waiting for the rest of our lives.” 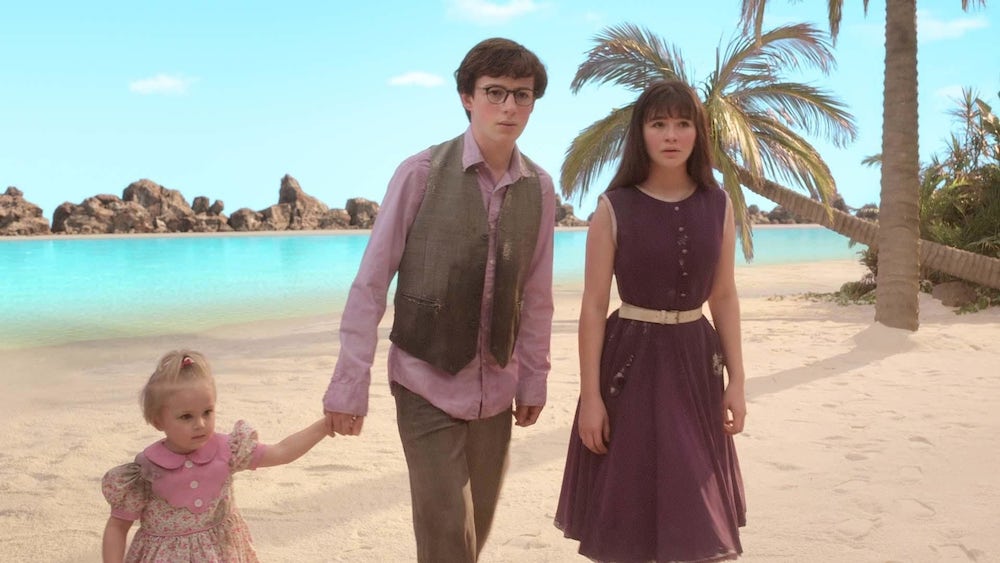 As you can see, this small black comedy-drama, adapted from a children’s novel series, has some big themes. Accurate to its premise, it doesn’t treat children like they’re supposed to be silent and stupid; instead, it gives both children and adults something larger to discuss afterwards. It also still gives us a little bit of mystery by the end, allowing for adults and children to continue the stories their own way. It’s a fitting end that the last scene of the series is of an adult, intently listening to (and believing) a child’s story.

In the end, the writing, production, and acting all combined to produce a fine piece of television. A Series of Unfortunate Events ends on a high note, giving us optimism while ensuring we’re fully aware of the ills in the world. It makes you feel like you can do, maybe not all things, but many things, as long as you’re determined and willing to risk of failure. And the show itself does this remarkably, using a unique premise, remarkably executed.