Max Ophüls is recognised as the father of French New Wave cinema, cited as a major influence by Éric Rohmer and Jean-Luc Goddard. He’s the director’s director; a favourite of Todd Haynes, Martin Scorsese, and Stanley Kubrick. Le Plaisir was the penultimate film of a career that spanned two decades, and is probably the best example of his characteristic kinetic camera work.

When Marcel Duchamp unveiled Nude Descending a Staircase, the viewers of 1912 could not make out the subject of the stunningly original painting. One US newspaper even offered a cash prize to anyone who could point out the figure. Duchamp’s early cubist approach had split the figure into fractured movements, in the same way as a multiple-exposure photograph does. To the modern eye, the figure is quite obvious, but when first unveiled, its audience hadn’t yet developed the visual literacy to discern the forms. 40 later, Le Plaisir met with similar derision from critics of the time, who found the continual movement of stage, set, and actors, very disconcerting. And the ever-restless point of view seemed nauseating. 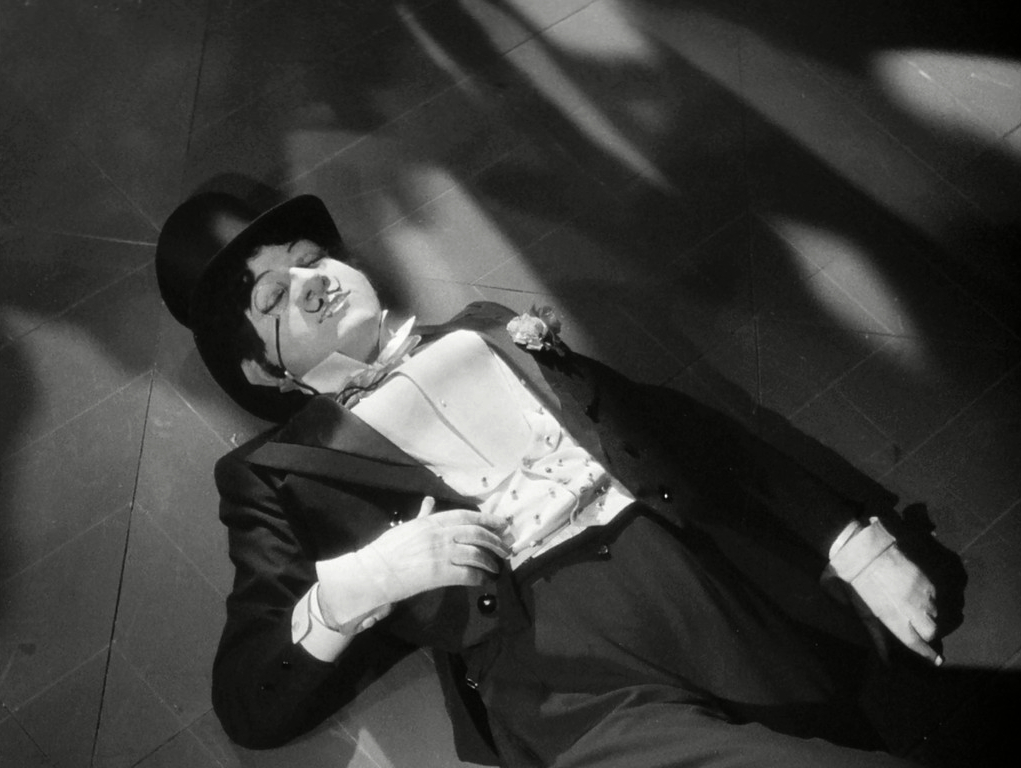 The constant movement of the camera throughout this film is an audacious visual conceit. In some scenes, the camera seems to be suspended impossibly, or to pass through walls. Today, we would use Steadicam and a drone to achieve the same effect, but given the unwieldy bulk of the equipment available to Ophüls, the sheer technical effort boggles the mind. How many dollies, tracks, cranes, and gantries did he have constructed? The planning of each shot must have been meticulous to keep all the gear and lighting out of shot. The seemingly chaotic milling about of the actors must have been choreographed with all the precision of a Busby Berkley musical. Camera operator Alain Douarinou deserves a mention of note here.

Le Plaisir is a portmanteau of three short stories by Guy de Maupassant, the 19th-century French author considered a master of the form. He was both a Romantic and a cynic. Think of him as French literature’s answer to Oscar Wilde. Like Wilde, Maupassant’s stories often have the feel of the fairy tale, though turned on its head: fairy tales are dreamy metaphors of real-life problems, but his dream-like tales have real-life consequences and conclusions. Most Maupassant stories are thinly veiled discourses on the meaning of life and the defining of self. He provided the spark of inspiration for some of those French philosophers, including Albert Camus and Jean-Paul Sartre. 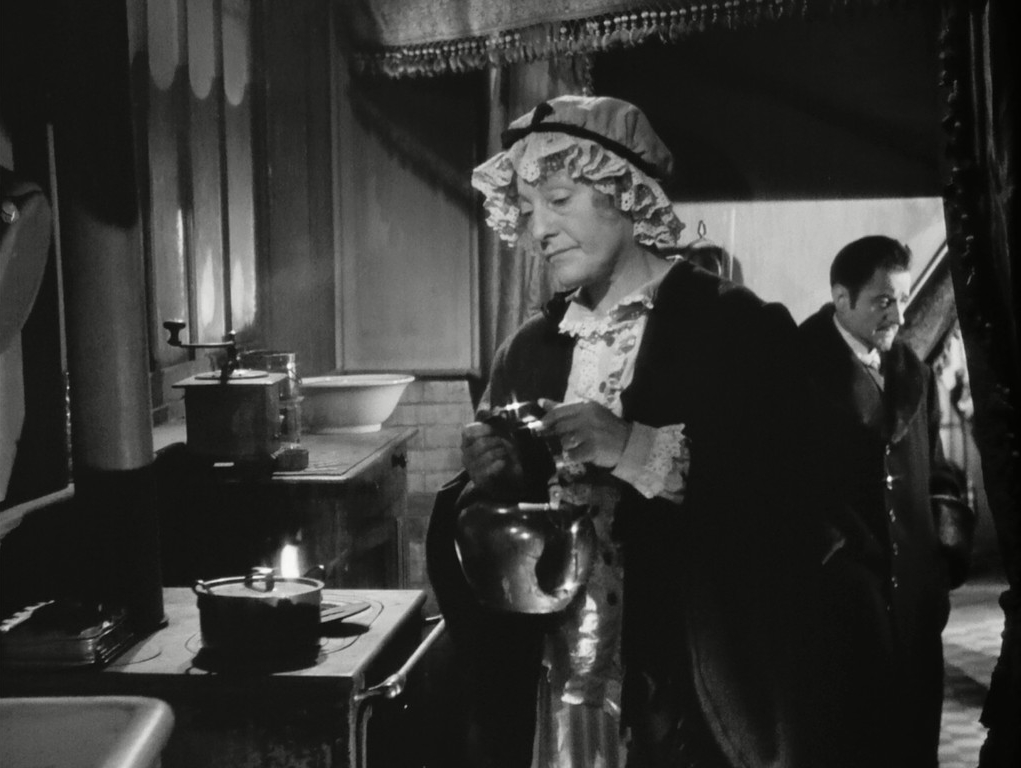 The film is structured like an altar-piece, a triptych with a substantial central section flanked by two shorter and smaller stories. In the same way as an old triptych, faded and worn around the edges, can still draw us in with its passion and emotion, so this restored print has become all the more hypnotic in its faded splendour.

Our narrator is the ghost of Guy de Maupassant, or at least his revenant voice speaking to us from the dark of an unlit screen. Perhaps he’s speaking on behalf of death, the absence of light, the absences of pleasure. He’s worried because his stories are old, and he knows we are modern…

“Le Masque” is the first segment, and unashamedly borrows its central metaphor from Oscar Wilde: to be accepted in different life roles, we’re forced to wear masks, and as we change our masks so often, we forget who we really are. In this simple story, an old man wears the mask of a young bon vivant in a futile attempt to recapture the joys of his youth. He looks to the past because the present scares him. The present is only one moment away from the future, and in his mind the future is death. 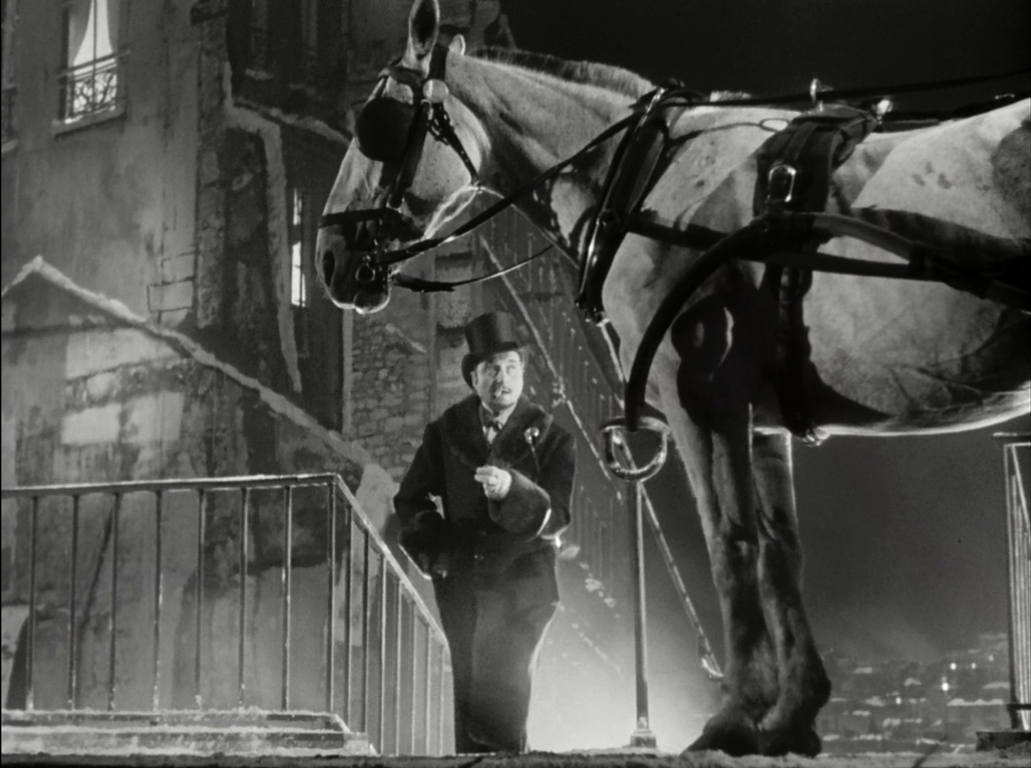 The longest segment, “La Maison Tellier”, is by far the most interesting and satisfying of the trilogy. It’s also structured like an alter triptych, giving the film a fractal, kaleidoscopic depth. In the first third, the narrator introduces us to the ladies of the ‘house’—yes, one of those houses—in an extended sequence. After the door’s closed in our faces, we’re forced to witness the secret life of the interior through the voyeuristic camera and its perfectly choreographed motion as it prowls up and across the façade of the building, lingering at open windows and peeking in through gaps in the shutters. This fabulous sequence was ground-breaking and can be seen quoted by the later disciples of Ophüls. Most notably, Dario Argento re-worked this idea, beautifully, with the stunning Louma crane shot in Tenebrae (1982).

There are too many characters to get to grips with, and by half-way I was having difficulty engaging with any of them. However, by then, I’d already been hypnotised by its aesthetic bravado. Then we’re taken away from the frenetic city and follow the group of ladies as they travel to the countryside to attend the first Communion of one of the Madame’s relatives… This is like the eye of the storm, what David Lynch calls the ‘eye of the duck’. One shot pinions the entire film and gives it form as we share the simple, sublime beauty of a vast night sky. A moment of perfect, profound beauty. It’s a moment that evokes the euphoria behind Vincent Van Gogh’s famous painting of a starry night. Then, right in the middle part of the middle section of this, the middle story… something really unexpected happens. 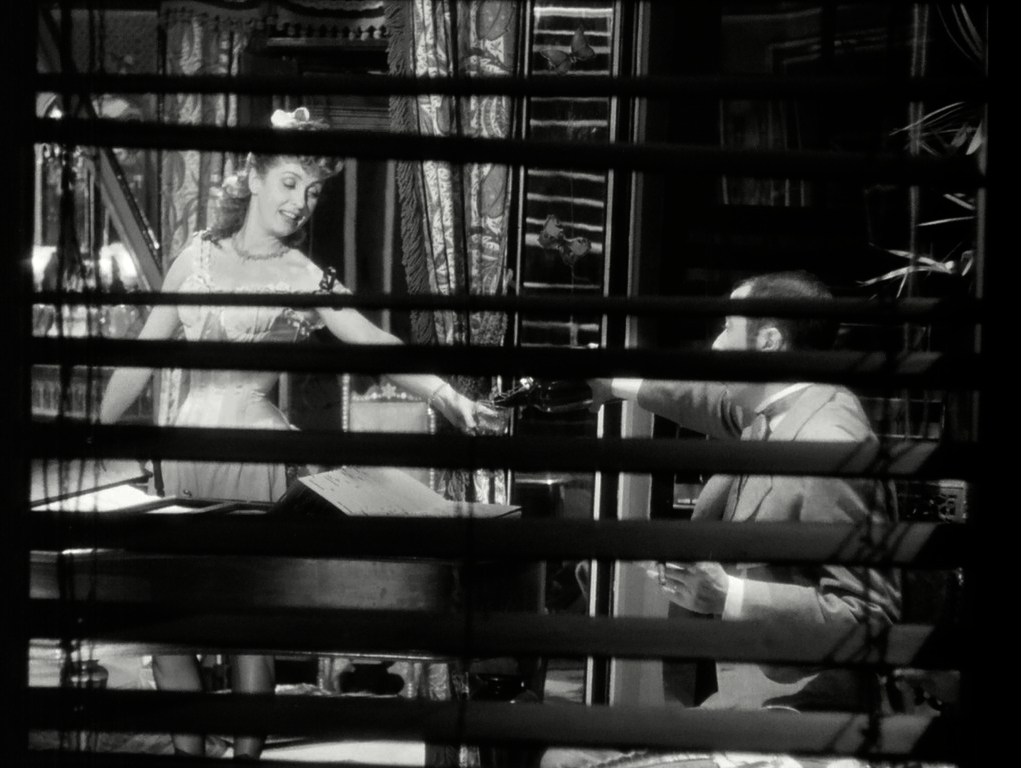 The scene takes place in a church, emphasising the altar-piece motif and, without giving too much away, I was surprised to find myself emotionally invested in the characters and suddenly moved on a deep level. This is particularly astonishing, because the moment is concerned with unspoken empathy between strangers… Now, if this little trick doesn’t work on the viewer, then the whole film will probably remain a shallow and rather disappointing experience, just like a life devoid of emotional connection.

From this mid-point in the over-arching narrative, the film opens up like a butterfly, the second half mirroring the structure of the first—like past and future to either side of the moment.

The third instalment, “Le Modèle”, is about an artist’s model falling in love with the artist, a sort of Pygmalion in reverse. Though nothing is clearly resolved, it acts as a conclusion for several themes raised throughout the film: the tendency to objectify beauty in order to own it, falling into the trap of nostalgia to avoid the dread unknown of the future, and confusing pleasure with happiness… 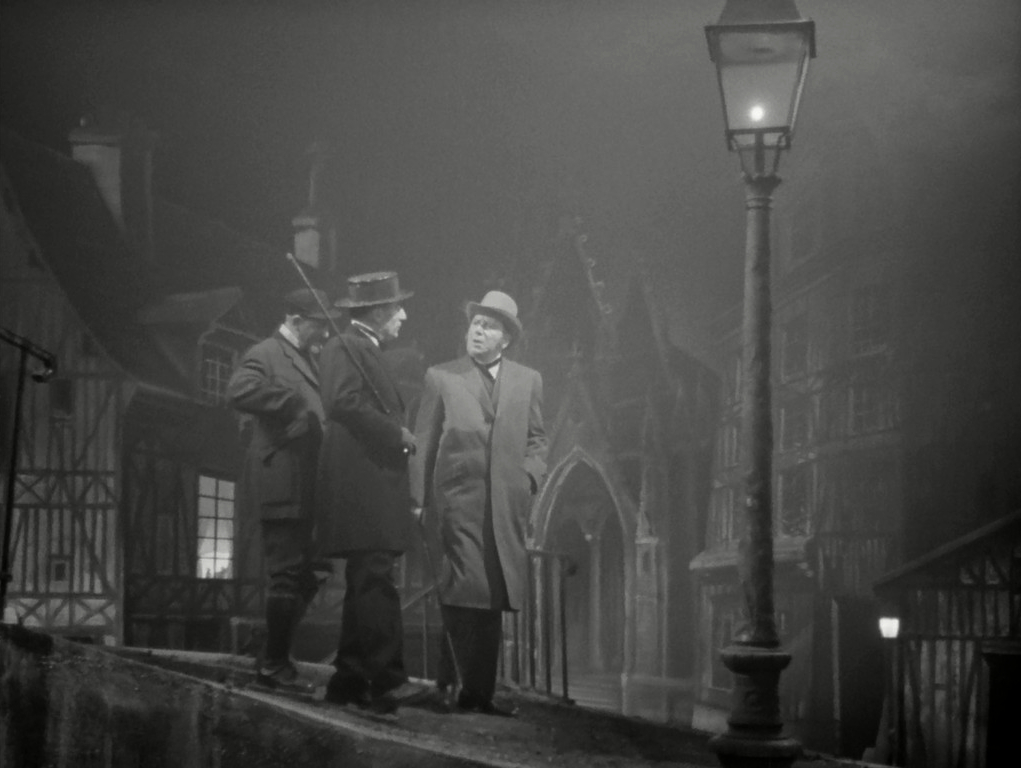 Throughout the film, songs of Jaques Brel and Scott Walker kept creeping into my mind, providing a personal soundtrack that helped as a salve for the brash music of the actual soundtrack and the incessant barrage of dialogue. Clearly, Maupassant, by way of Ophüls, was a huge inspiration for them both!

Guy de Maupassant, seems to reiterate that only a life spent in pursuit of happiness, for ourselves or others, has validity—even though that pursuit will ultimately be frustrated. Pleasures are distractions from death, and even the most pleasurable life will meet the frustration of death. Maupassant implies that it’s a fear of frustration that scares us into abandoning the pursuit of what truly pleases us. Although emotion is the only thing that can make pleasure meaningful, we surrender to ennui rather than risk real emotion. We chose inertia over action. He wrote, “I know nothing more pleasurable than the carefree wandering life, in which you are perfectly free; without shackles of any kind, without thought even of tomorrow. You go in any direction you please, without any guide save your fancy.” 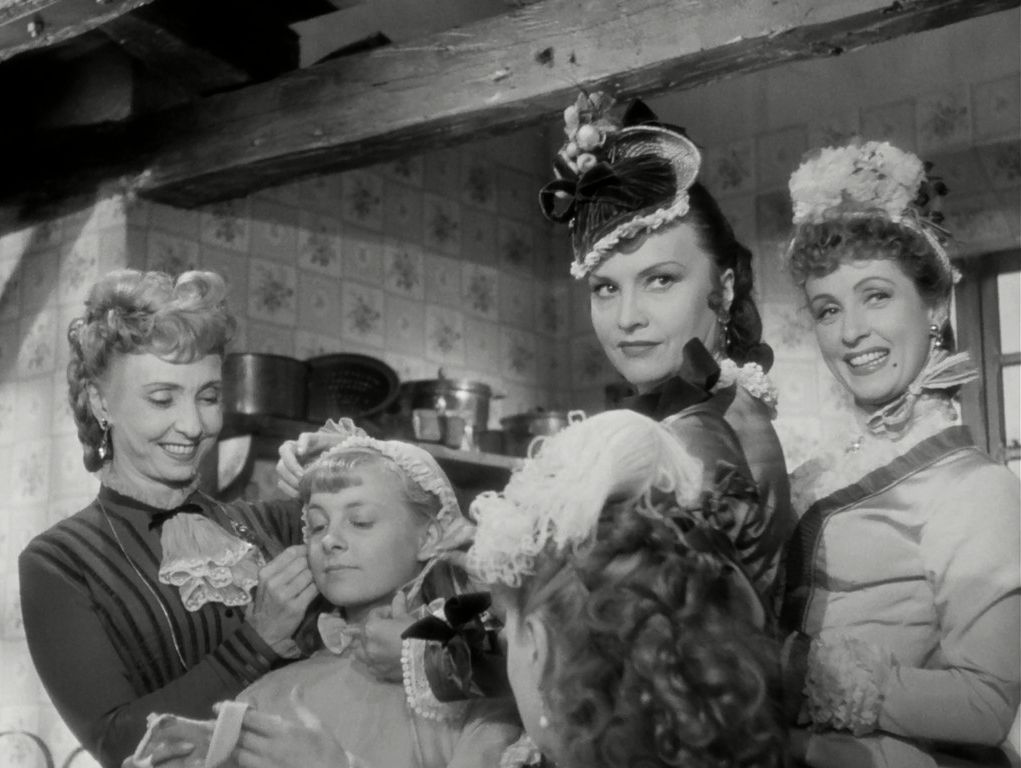 In Le Plaisir, the momentum of the camera is a clear rebuttal of inertia. Ophüls is combatting the ennui he saw entrenched in French literature, pushing it back from the frontiers of cinema. Ultimately, though, our pleasure is frustrated: we are excluded from the frame and the film ends. The light of the screen succumbs to the darkness of the auditorium, and we, the audience having sat inertly throughout will shuffle off, en masse, towards our separate lives.

Well, maybe that was true back then, but now, thanks to this restored Blu-ray release from Arrow Academy, we can watch, pause, and replay to our hearts content! We can revisit and revel in the visual joy Le Plaisir brings us, lending our lives a brief validity of pleasure.

The new Blu-ray also contains A Journey Through Le Plaisir, an excellent 54-minute documentary revisiting the locations and talking to people involved with the production. It really provides a context for a modern audience to understand the film-making, and gives an insight into the intended meaning behind some of the more subtle scenes, just in case you don’t get it on first viewing. There is also an interview with Marcel Ophüls, the director’s son and fellow film-maker, and there’s a short appreciation of the careful restoration process, working with archival material supplied by Gaumont Film Company, the original producers.

An essential release for film-buffs and Max Ophüls aficionados. 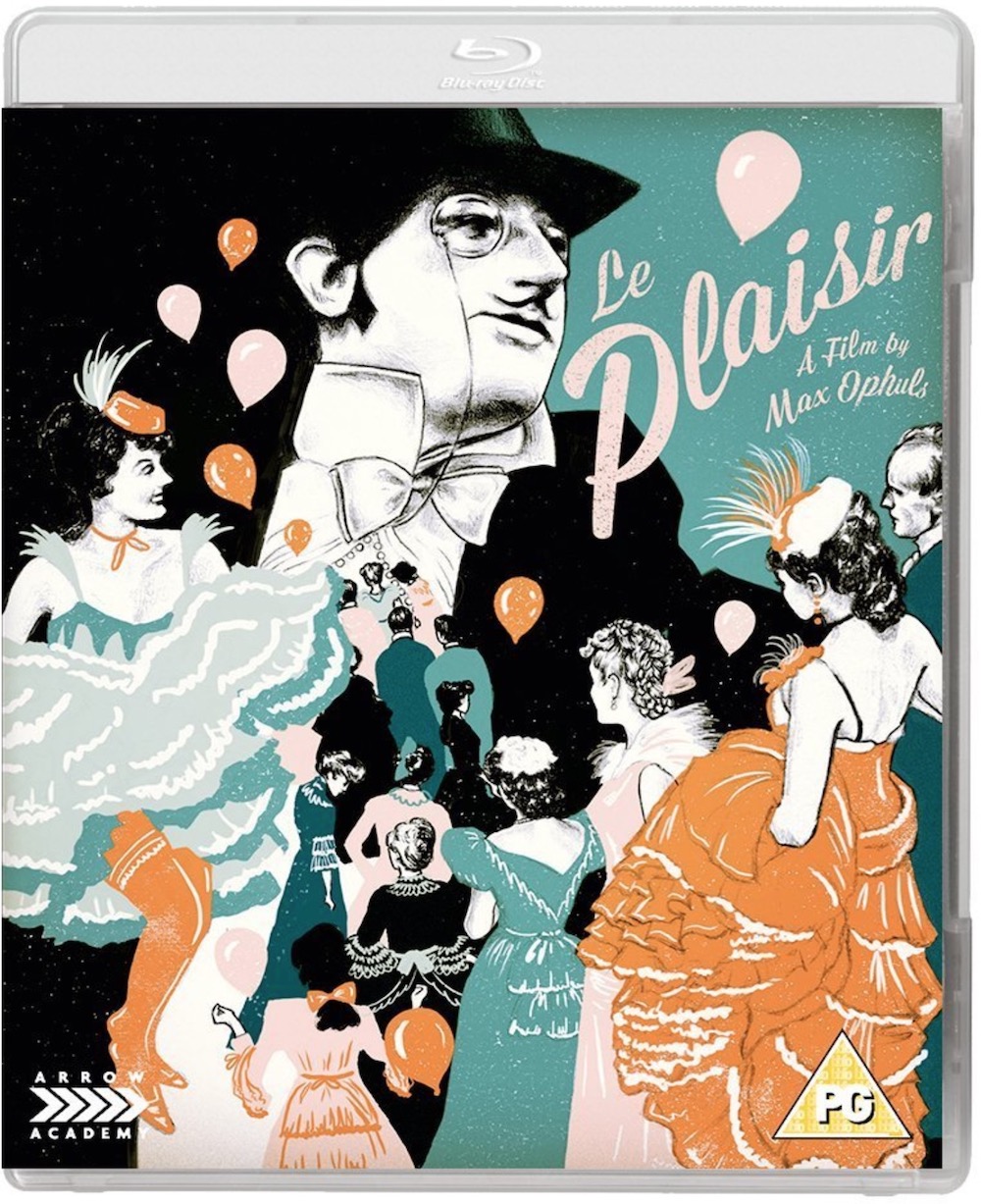