Shared universes are all the rage. Since Marvel started seeding The Avengers in their early standalone films, beginning with Iron Man (2008), replicating their style of ‘cinematic universe’ has become the goal of many studios with their own blockbuster franchises. Legendary Pictures kicked off their attempt with Gareth Edwards’ Godzilla (2014), and now follow it up with another titan of cinema: King Kong. Unfortunately, as both standalone movie and the second brick in a wider franchise, Kong: Skull Island drops the ball.

Set in the 1970s, decades before the new Godzilla rose from the deep, the film depicts an early venture of Monarch, a mysterious organisation tasked with investigating mysterious creatures that might exist in the dark recesses of the world. William “Bill” Randa (John Goodman) is a Monarch official who recruits a team to investigate an uncharted island, only recently discovered thanks to cutting edge satellite technology. Among them is hunter-tracker James Conrad (Tom Hiddleston), well-meaning anti-war photographer Mason Weaver (Brie Larson); and army veteran Preston Packard (Samuel L. Jackson). Naturally, it’s not long before the mission goes awry and the group find themselves navigating across an alien landscape that’s strange, surprising, and exceedingly dangerous, if they’re to have any hope of surviving. 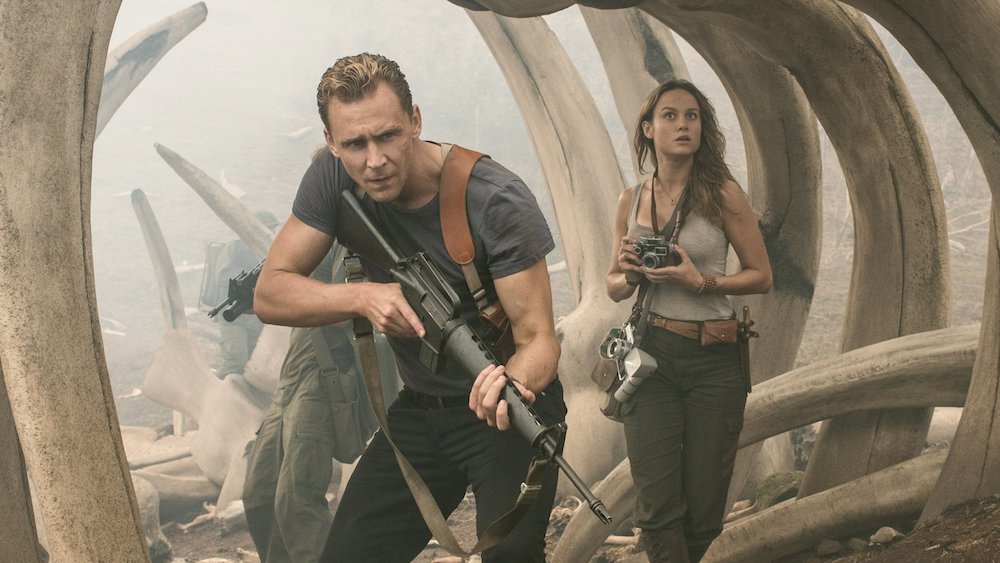 For those frustrated 2014’s Godzilla took half the movie to show up, you’ll be relieved to know there are no such concerns here. Kong makes his entrance early and to devastating effect. Godzilla’s monumental size is impressive, but he’s not terribly nimble. Kong, however, wreaks havoc with speed and calculation, and his assaults feel less like a force of nature bearing down, with little regard for the people scurrying in its wake, than a distinct and very pissed off intelligence; one that’s happy to stoop to humanity’s level with a streak of spitefulness. While Kong himself is just as impressive as his scaled counterpart (the digital effects are tremendous), Skull Island is otherwise less assured than its predecessor.

The most obvious issue is a clash of contrasting styles — or at least a failure to merge them. Half the movie plays like a matinee adventure; a comic-style romp through a fantasy world filled with thrills and laughs. It’s Indiana Jones and the Giant Ape. The other half has far more heft as a meditation on the vagaries of war, with heavy Vietnam War parallels, drawing on Apocalypse Now as its principal point of reference. There may be a way of reconciling those two approaches in one film, but director Jordan Vogt-Roberts (The Kings of Summer) didn’t find it. The result is a picture that feels piecemeal and stapled together. 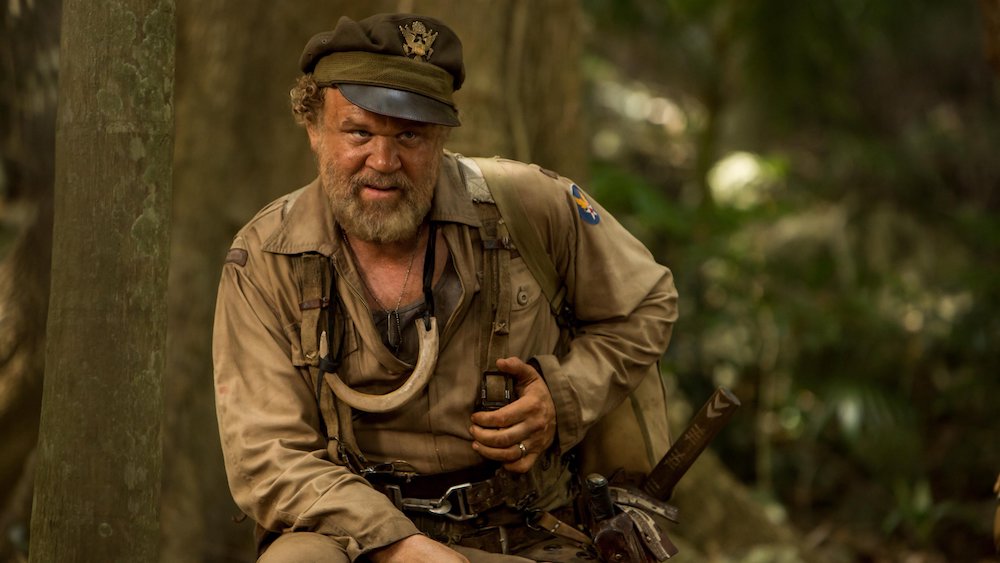 In a perfect world, the characters might be the glue to hold these two mismatched styles together, but most of the cast feels thrown together by committee, and very few of Skull Island’s ensemble get anything of substance to play. Hiddleston is as bad as he’s ever been as Conrad. Granted, he’s given less nothing to work with, but he makes Aaron Taylor Johnson’s hero in Godzilla look positively dynamic. Goodman is utterly wasted, while the banter between Shea Whigham and Jason Mitchell’s army pals falls largely flat. Oscar-winner Larson comes out of it well, but there’s an array of bafflingly superfluous side characters so pointless you forget they exist whenever they’re not on screen. (A more cynical reviewer might even suggest that Jing Tian’s presence was simply a ploy to appeal to Asian markets.)

Samuel L. Jackson, at least, has something to sink his teeth into. He brings his customary intensity to play Lt. Col. Packard, a man who strikes up a personal — some might say fanatical — vendetta against the titular ape, even as it becomes clear that (like Godzilla before him) Kong might not be the real threat. There’s more than a little of Captain Ahab about Packard’s obsession, and it makes for at least one distinctive character. The other human to standout is Hank Marlow (John C. Reilly), a World War II pilot who’s spent decades stranded on the island, and whose grip on reality is thus hanging by a thread when the newcomers find him. Reilly’s a hoot, providing much of the film’s comic relief, and a fair portion of its pathos, too. The problem, once again, is that those two characters don’t really belong in the same film. 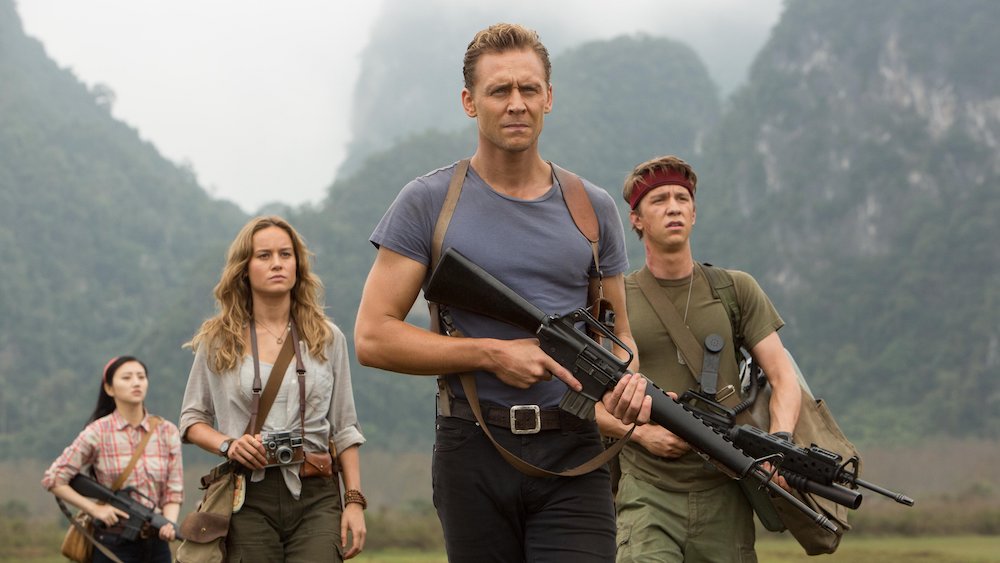 The script is too often heavy-handed, with extremely clunky exposition, and a need to lay groundwork for future movies that feels laboured and unwelcome. (Keep an eye out for a post-credit scene, if you still care by then.) Certain other elements are routinely dropped or forgotten, like a potentially interesting native tribe who appear for all of 5 minutes.

Kong: Skull Island undoubtedly looks incredible, at least, with Larry Fong’s cinematography making the most of the beautiful island landscapes and period aesthetic to create a ‘70s-flavoured work of art. Many of the shots look like beautifully filmed comic book panels, so vibrant are the colours. In one instance, Conrad finds himself wearing a mask, wielding a sword, and hacking “birds” out of the air, against a lurid turquoise background of smoke… and it looks awesome. But it also comes out of nowhere. It’s such a heavily stylised visual, that it jars — feeling more like something from a colourised version of Sin City than anything else. Maybe if Skull Island had committed to that vision throughout, the movie might have fared better. 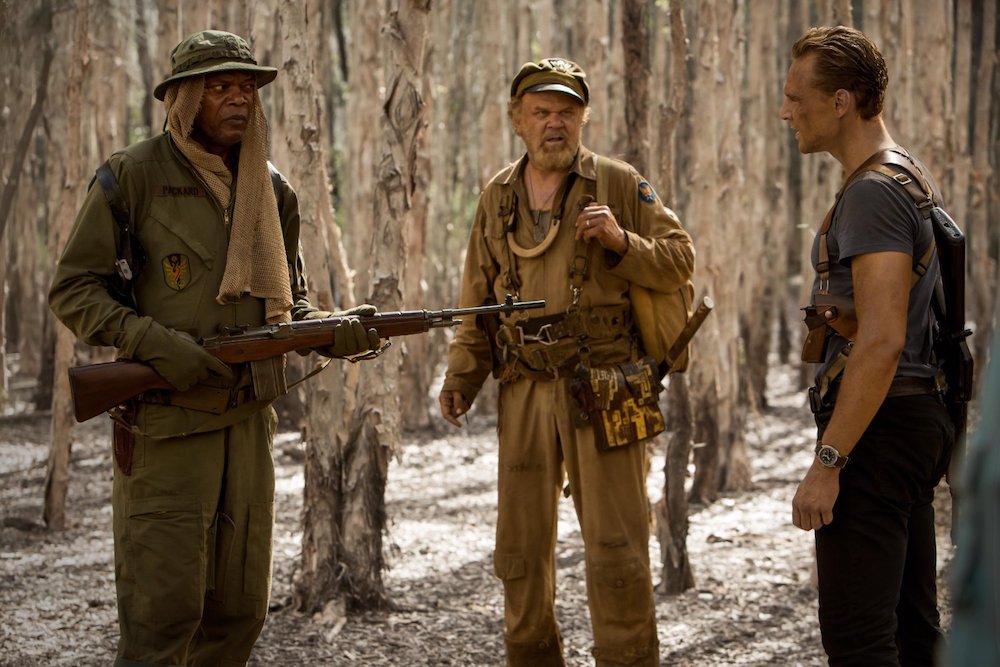 On the plus side, Henry Jackman’s score is suitably dramatic, and Vogt-Roberts shoots the big battles very effectively. It’s not always the case in films like this, but you always know exactly what’s going on as the various megafauna of Skull Island clash. The big set-pieces are exciting and superbly handled, and while it’s nothing we haven’t seen before, it’s undeniably thrilling. The wildlife on the island is enjoyably diverse, with creatures ranging in size and hostility, to the extent that it feels like it could almost be a real ecosystem. (Some of the menagerie on display are very reminiscent of creatures from Frank Darabont’s The Mist.)

At times, Kong: Skull Island is a thrilling and striking slice of monster mayhem, with a relevant war allegory to lend it substance. At other times, it’s an amusing and exciting comic book-esque treat with cartoonish characters, stylised action, and a few laughs. But, more often, it’s neither —  muddying the waters between the two until you want to drink neither. At times it even feels amateurish, marking it as another big budget movie that a first-time indie director like Vogt-Roberts shouldn’t have been entrusted with this early in his career.

Kong: Skull Island is definitely worth a look if you like monsters and visual effects spectacle on the big screen, but with War for the Planet of the Apes on the horizon, I think we can know which will be the superior monkey movie of 2017…