Evan’s an architect married to an artist, with two children. It’s Father’s Day, and he’s home alone as his wife and kids go holidaying to the beach. (It seems nonsensical, but the film suggests he’s got a lot of work to finish and needs peace and quiet). That night, Bel (Ana De Armas) and Genesis (Lorenza Izzo) turn up on his doorstep in need of help. Nice guy that he is, Evan of course lets them in. Soon enough their intentions to bombard him with outrageously sexual stories and unsubtle seduction (their clothes are wet, so of course they have to throw them in the dryer) become all too clear. However, it’s not until the next morning (and after certain vows have been forgotten) that the sick joke really begins to unravel… and the spunky duo begin playing disturbing mind-games with their married host.

While Knock Knock is shocking, it’s not a particularly sophisticated piece of work. Roth and his co-writers Guillermo Amoedo and Nicolás López concoct something that’s endlessly provocative, yet completely pointless. Bel and Genesis may have sinister plans for Evan, but the film doesn’t do much to convey exactly why they’re doing this. Even as they throw accusations at Evan—both about his wealth and how easy it is to make any man cheat—it never feels like the film has any interest in fully exploring those ideas. De Armas and Izzo are easily the best thing about Knock Knock, bouncing around the house like destructive forces of nature with perfect comic timing, but the film does nothing to suggest they’re anything other than sociopaths. To them, this is all a game; a viewpoint that should come off as unnerving, but feels more silly than anything. 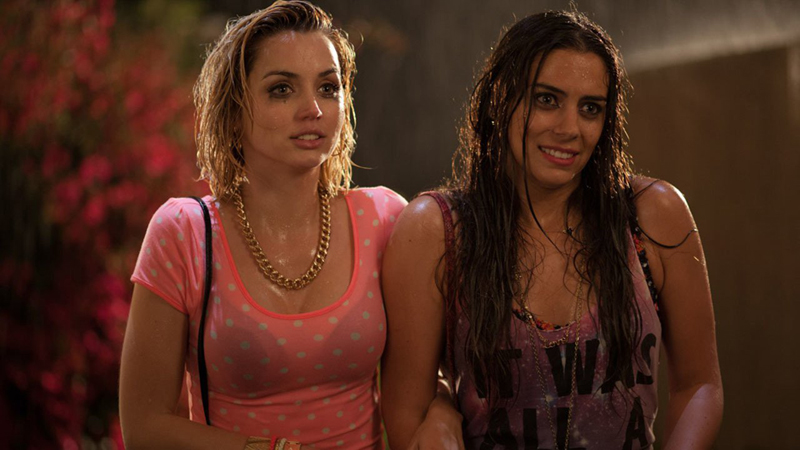 It also doesn’t help that taciturn Reeves is woefully miscast here. Such a role requires more emotional range than we’re used to seeing from him, as he’s presented as a devoted husband, loving father, and talented professional (not only an architect, but an erstwhile D.J). It’s a shame, then, to see that Reeves isn’t up to the task. With John Wick he reminded everyone he’s a convincing action lead, post-Matrix, but this is a real backslide as he struggles to find the camp, lurid tone Roth’s aiming for.

We do still root for Evan, though, especially as his psychological punishment becomes increasingly severe. As it progresses, the film challenges him to escape from the situation, and it’s ridiculous that he has such little luck doing so, or is so easily persuaded to not call the cops. It’s holes like this that drag the story down, because the entire premise falls apart the more you question it. One area it can’t be faulted, though, is with the pacing. It’s impressive just how long Knock Knock builds anticipation, even if most of us have a fairly good idea where things are headed. When it follows the slow-burn anticipation with manic craziness, it doesn’t let up. There’s nothing particularly violent here, despite Roth’s reputation for orchestrating cinematic brutality, just a great deal of sustained threat and mounting tension.

Ultimately, Knock Knock believes that any man would be tempted if this supposed fantasy scenario were to occur, suggesting that even the most committed family man wouldn’t be able to resist. In what is perhaps the film’s most ridiculous moment, Reeves’ character yells about how he can’t possibly have been expected to say “no” to what he describes as “free pizza”, and how he shouldn’t be held accountable for his transgression. I don’t think many people would question Evan’s wrong to fall for the young women’s charms, but his punishment goes to extreme places without much sense of why these girls are doing this, or what the meaning behind the story is. Still, Roth’s crafted an outrageous, shocking, and sometimes very darkly humorous; demonstrating there could be more to the Hostel creator’s career than the graphic torture sequences he helped popularise.