And now for something a little different. Orange is the New Black’s showrunner Jenji Kohan set herself a tough task following up the first two seasons, but season three of her prison dramedy matches their highs while cleverly subverting expectations. Though Kohan stops short at reinventing the wheel, this season she cannily shifts the show’s focus—it’s less about the Big Bads, more about upping the human drama and left-field kookiness. The result is something lighter, slower, and, ultimately, just as rewarding.

The shift will come as a shock to viewers who enjoyed season two’s fireworks-packed Vee storyline, especially as season three opens with a low-key episode centred around Mother’s Day at Litchfield Penitentiary. As inmates enjoy an in-grounds funfair with their kids, the episode reintroduces the entire cast while laying down the season’s thematic arc—motherhood—although there are plenty of other irons being kept hot besides (we’ll get to those in a bit).

While the opener succeeds at establishing a more measured pace for the drama, it also effectively reminds us that Orange is the New Black is no longer all about Piper (Taylor Schilling). Kohan has admitted she “tricked” Netflix bosses into commissioning OITNB by pretending the show was all about a pretty white girl with a list of first-world problems as long as her salon-fresh hair. Over the show’s first two seasons, though, the show became more of an ensemble piece, and season three completes this transition. Now, Piper receives as much screen-time as any of the other inmates. 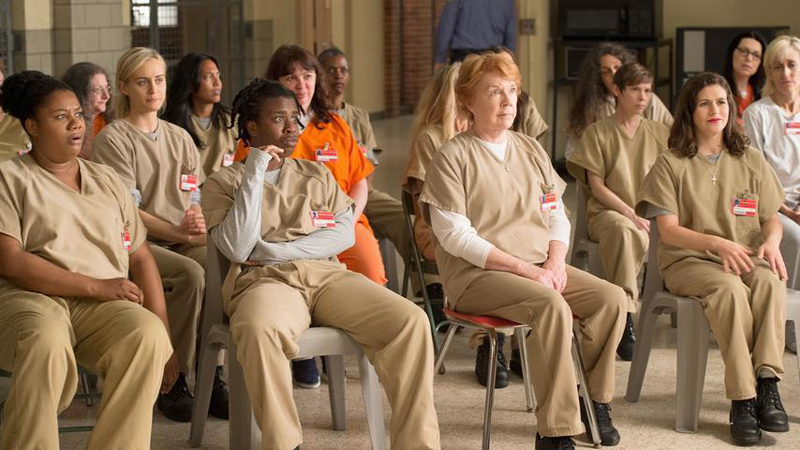 That’s not to say this isn’t an important season for her, or that she’s marginalised. Piper actually gets her strongest arc yet, and with the pressure of ‘leading lady’ status removed, she’s easily the most entertaining she’s ever been. Schilling revels in the character’s innate dislikability, shining during a rousing tabletop speech (“Long after we’re gone our smell will linger!”) and going all out when things take an unexpectedly dark turn down the line.

And with Alex (Laura Prepon) returning, after mostly sitting out season two, the pair’s relationship develops in new and interesting ways; not least when Aussie newcomer Stella (Ruby Rose) and the hilariously jittery Lolly (Lori Petty, exclaiming “This place is amazing! We got off the bus five minutes ago and I haven’t heard anybody screaming!”) enter the frame. They aren’t the only new faces, either. Most notably, there’s a new guard in the form of Berdie Rogers (Marsha Stephanie Blake), who’s given little to do overall, but is responsible for some of the year’s standout moments, including a laugh-out-loud ‘fruit stall’ make-up scene between Piper and Alex; and Crazy Eyes (Uzo Aduba) inadvertently becoming the new E.L James. Her brilliantly smutty sci-fi novel (The Timehump Chronicles, which she sells as about “two people connecting with four other people… and aliens”) needs to be published yesterday.

With the show’s cast list streamlined considerably—Jason Biggs is a no-show throughout, while guard Bennett (Matt McGorry) and fan-favourite Nicky (Natasha Lyonne) bow out early—more is made of the prison’s administrators in a season that has bones to pick with the way U.S prisons are run. Episode two (“Bed Bugs And Beyond”) establishes that Litchfield may be closed, but when it’s bought out by a private company an entirely new can of worms is peeled open. Meanwhile, season three puts the relationship between the guards and their inmates even more in the spotlight.

That said, emphasis has always been on examining the inmates as women with troubled pasts; and with a smaller cast to service, the supporting characters really get a chance to shine this year. Big Boo (Lea DeLaria) delivers one heck of an emotional gut punch, while Leanne (Emma Myles), Chang (Lori Tan Chinn) and Flaca (Jackie Cruz) all receive the backstory treatment with stellar results. These are the kinds of women who’d never star in more mainstream television shows, and they ensure that OITNB continues to feel fresh, relevant, and damn-near revolutionary in its depiction of everyday women dealt a bad hand in life. 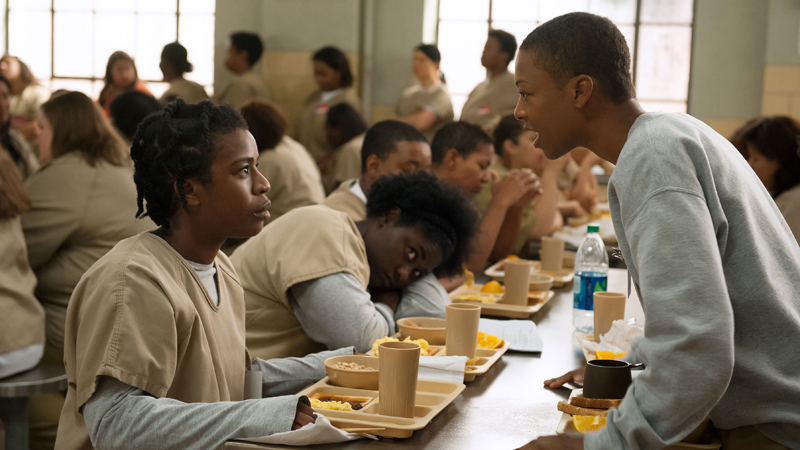 It’s not all strong, though. There’s nothing this season that comes close to matching OITNB‘s awesome season two opener (directed by Jodie Foster), in which a bemused Piper was escorted to a mysterious hearing she had no idea was scheduled. For all the changes made this season, episodes feel increasingly formulaic—there’s a worrying adherence to a blueprint (in-prison drama + out-of-prison drama + flashbacks) that suggest further changes will need occur to prevent the drama growing stale.

And if there’s one clanger in season three, it’s the show’s tackling of religion. With silent Norma (Annie Golden) becoming an Amma-like figure of worship, and Lolly’s special Kosher diet prompting half of Litchfield to claim they’re Jewish, Kohan and her writers attempt to explore religion in subversive ways. That’s fine, and their ideas are fun, but they’re not exactly strong arc material—especially when we’ve seen similar fanaticism before with Pennsatucky. And while Cindy (Adrienne C. Moore) has a funny interview with a Rabbi, her supposed ‘spiritual journey’ is sorely unconvincing.

These niggles can be mostly forgiven, though, because it’s clear OITNB is looking to try something very different post-Vee. It’s refreshing to find a show willing to shake things up to this extent, and season three of OITNB is all about the slow-burn. Celebrity chef Judy King (Blair Brown) is introduced via a TV set as early as episode six, but she doesn’t get anywhere near the prison until the finale. Meanwhile, Alex is paranoid that somebody’s been sent to the prison to finish her off, but that storyline doesn’t take off until much later in the season. 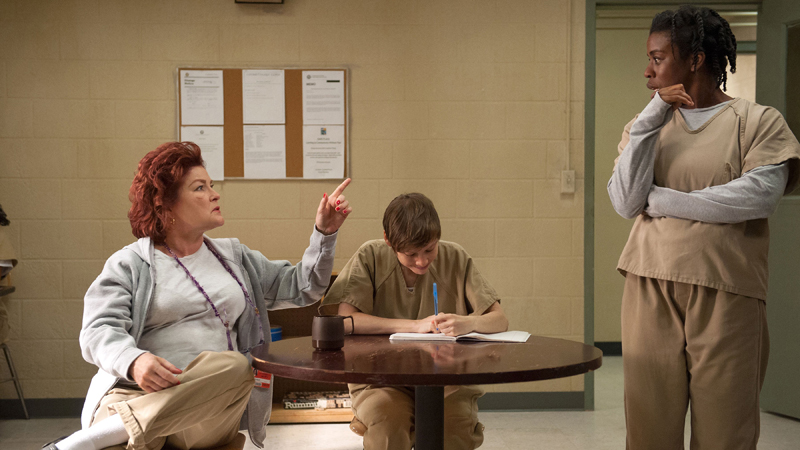 The low-key approach isn’t a bad thing, though. Kohan seems to have taken her cue from cable dramas like Breaking Bad and Mad Men, that sow seeds early to flourish when you’ve almost forgotten about them. It’s a risky endeavour that might lose the show some viewers, but it rewards the faithful.

It’s to the credit of Kohan and her team that they’re able to juggle this show’s ensemble cast with such skill, too. True, certain characters recede into the shadows (Yoga Jones, Sister Jane), but there are surprising developments all over the place. Pennsatucky (Taryn Manning) gets close to a new guard, but it’s unclear if she can trust him; Soso (Kimiko Glenn) becomes almost catatonic with depression; Sophia (Laverne Cox) and Mendoza (Selenis Leyva) find their families thrown together; and Red (Kate Mulgrew) steals every scene she’s in while developing a deeper understanding with Healy (Zachary Doran).

If season three of OITNB is about anything, it’s change. That’s most true in a narrative sense (the overhaul at the prison, a newborn very much on the way, cast members coming and going), but also in terms of the show’s deeper personality. This season upped the laughs, but put a brake on pace. It may take its time getting there, but by the time OITNB reaches its euphoric, feature-length season finale—which, like all the best ones, wraps up subplots while promising big things for next year—you’ll have accepted it as a necessary, if occasionally bumpy journey.

One thing’s for sure, OITNB is heading into its fourth year stronger than ever.