The first half of series 2’s penultimate episode felt curiously subdued. There were some strong moments, particularly when it came to Renie (Letitia Wright), but it didn’t feel like enough pressure was rising towards Humans’ finale next week. It turns out that was hugely misleading, seeing as the back half of the episode provided perhaps the finest material Humans has ever delivered…

It wasn’t a light episode—there was a lot of death, and suicide emerged as one of the key themes. First up, poor, sweet Odi (Will Tudor)—who was given the gift of life, but couldn’t work out what to do with it—decided that he’d rather opt out of consciousness by deleting himself, after leaving a farewell note to Mattie (Lucy Carless). In another world, Odi’s arc could have filled an entire series by itself, but Humans is unfortunately too busy to devote itself to a single character like that. But having Odi around—or Will Tudor’s tender performance—provided the show with a constantly touching subplot to return to. The only sour point is that his goodbye moment here, with Mattie breaking down in tears, would have worked so much better coming at the end of episode 6, without the distance between his day of soul-searching. Given that he has only one scene here, it was a shame his death felt something of an afterthought, although it still managed to be achingly sad. 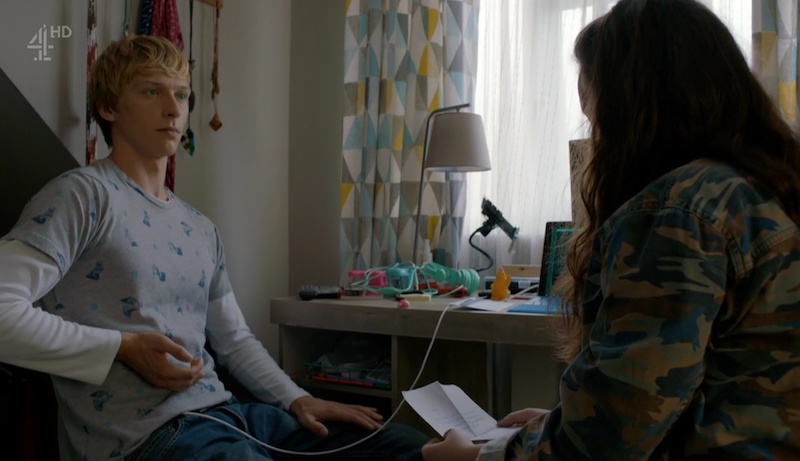 More effective was the misdirection regarding Renie’s potential suicide. Director Mark Brozel made it look for all the world as if Renie was about to take her own life after her encounter with Sophie (Pixie Davies) brought both the reality and artifice of her life crashing down around her. It’s to Brozel’s credit that it didn’t feel like a cheat when Renie stepped out the bathroom—giving Joe (Tim Goodman-Hill) a hilarious fright in the process—largely because she did commit a metaphorical suicide, discarding her ‘synthie’ persona and stepping back into the human world as her natural self. Credit also to Wright, whose long look directly into the camera was a stylistic departure for Humans, but one that worked. 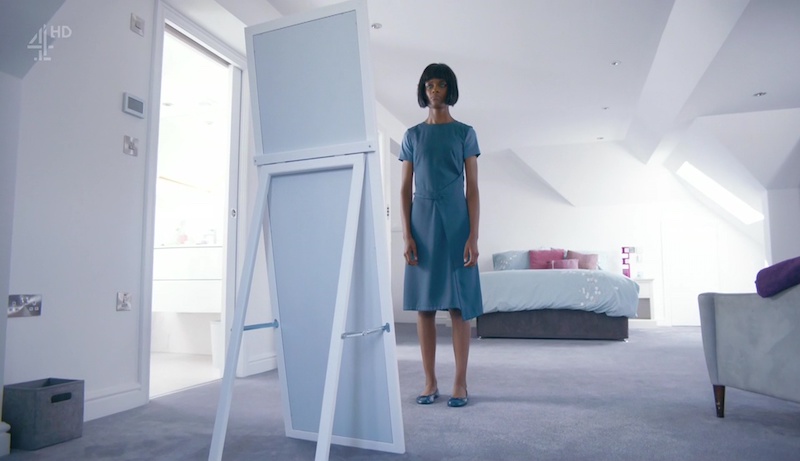 Karen (Ruth Bradley), meanwhile, sought out Dr. Morrow (Carrie-Anne Moss) to enact her own metamorphosis, having decided to let Morrow experiment on her, perhaps even transfer her deceased daughter into her synth body. Whether this would have erased Karen’s ennui, or simply merged with it, was unclear—but either way, it didn’t come to fruition thanks to Leo (Colin Morgan), Hester (Sonya Cassidy) and Mia’s (Gemma Chan) incursion into Qualia’s compound. And that’s where the proverbial hit the fan to a previously unimaginable degree. 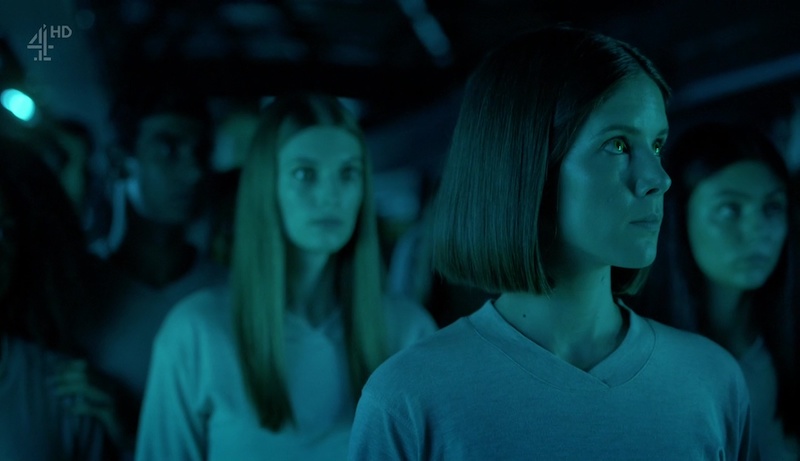 While Hester was determined to go in guns blazing, Mia came up with a subtler approach, as the pair set about liberating their stolen brothers and sisters. They made a formidable team. The synths, whose confused first moments of consciousness were compounded by being stolen, and effectively tortured, by Qualia, then step out into the pure light of the English countryside. It was a glorious moment. It’s everything that Leo and friends have been working towards from the very beginning, and it was beautiful. And that’s when writers Sam Vincent and Jonathan Brackley pulled the rug out from under us. 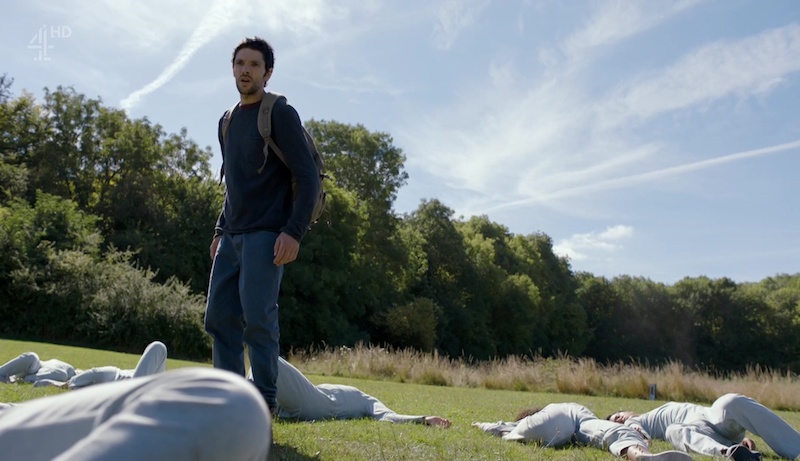 Brozel’s decision to shoot the deaths of the liberated synths (who’ve walked right through the sort of energy barrier familiar to Lost fans)—out of focus, in the background, with the camera fixed on Leo’s satisfied face, paid huge dividends. Much like Leo, it took us a moment to figure out exactly what was going on. The sight of more and more white-clad synths disappearing out of shot as they fall to the ground was very unsettling, and soon it became clear that something was drastically wrong.

After such a moment of quiet triumph and freedom, these equally quiet deaths come as a devastating blow. Much of Humans has been about freeing the captured synths, and the show revealed a rare cruel streak by cutting them down at the very moment of their victory. Leo could do nothing but sink to his knees and howl in anguish; Morgan being superb in his guttural reaction. From the moment they began to fall, to shots of Leo sat helplessly numb among piles of dead synths, Brozel created the most starkly memorable images in Humans’ short history. 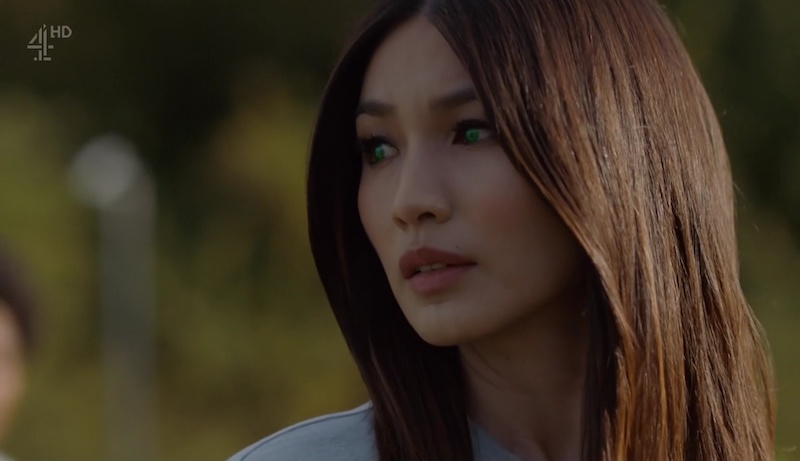 And the horror didn’t end there.

While Leo’s dealt with the tragedy upstairs, a more personal one was taking place below, as Hester went looking for Morrow and found her locked in a lab with Karen. And who should turn up at this inopportune moment but our favourite hapless police officer, DCI Drummond (Neil Maskell). While his arrival was something of a contrivance, it allowed for a riveting scene to play out. Drummond has often been a character the writers haven’t quite known what to do with, but credit to Maskall for giving him a fine exit; one that not only demonstrated Drummond can be good at his job (doing all he can to talk Hester down), but one that also reaffirmed his love for his synth partner. This latter point demonstrated that humans and synths can co-exist and love one another, but it wasn’t enough for Hester. As convincing as everyone was, you always had the sense that violence would be the path she chose. 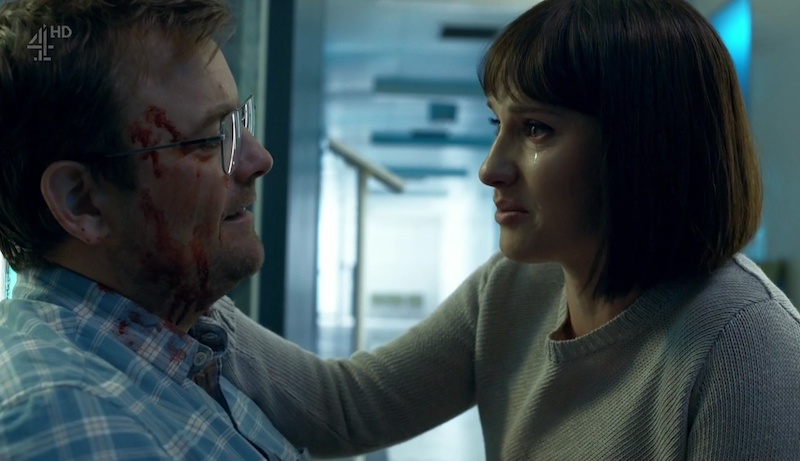 Being stabbed to death with a biro seems like a suitably ignominious end for Drummond, but there was nothing funny about this sequence. Drummond and Karen’s final exchange was as bittersweet and heartbreaking as anything in the episode, but it’s Karen’s final reaction that was truly chilling. Ruth Bradley’s smile for her dying lover morphed slowly and seamlessly into a face of purest anguish as he passes away. It was a phenomenal piece of facial gymnastics from Bradley; a visceral and haunting piece of acting that was more understated than Morgan’s howl, and all the more effective for it.

The episode isn’t perfect—for one thing, it seemed too easy for people to stroll into Qualia’s secure secret facility with a minimum of fuss—but this is arguably the strongest half episode Humans has given us. For a series often so reluctant to kill off its character, to see the hour be so ruthless was a genuine and welcome surprise. It begged the question of quite how they’re going to top it for the finale, but with Mia versus Hester now very much on the cards (Mia’s steely expression was, as always, perfection from Chan) that shouldn’t be a problem!