Poor Dr. Chilton. A brief history of Frederick Chilton, onetime director of the Baltimore State Hospital for the Criminally Insane and self-proclaimed best-selling author. First appearing in Thomas Harris’ Red Dragon, where he mostly serves as Hannibal Lecter’s antagonist, Chilton’s most memorable previous appearance was in The Silence of the Lambs, where he’s tasked both with delivering Hannibal Lecter’s backstory to Clarice Starling (and us) and clumsily flirting with the young FBI trainee. As played by Anthony Heald in the film version, Chilton is a perfect heel; as clumsy in his attempts to get inside Lecter’s head as he is when hitting on poor Clarice (“Baltimore can be quite a fun town, if you have the right guide”). It’s a perfect metric of Chilton’s scumminess that Silence director Jonathan Demme—a true humanist who extends a certain amount of empathy to even as disturbing a character as Buffalo Bill—was okay with Chilton’s presumable offscreen death being used as the setup for a movie-ending pun. The poor guy just wanted to take a vacation…

As portrayed on the TV series, Dr. Chilton (Raul Esparza) is also a heel, albeit one that has become oddly pitiful due to his escalating misfortunes. Chilton briefly served as an antagonist in the first season, it was due to his being a poor psychologist rather than any deliberate malice, as he unintentionally convinced Abel Gideon (Eddie Izzard) during hypnotherapy that Gideon was the Chesapeake Ripper. Since then, Chilton’s been primarily known for his incompetence, his hope to become famous through his proximity to the Chesapeake Ripper, and the ease with which the show’s characters can manipulate him to assist in their own plots. This version of Chilton is still a heel, but it’s hard not to feel for him, in “The Number of the Beast is 666…” when he asks Hannibal (Mads Mikkelsen) if he’s his nemesis and Lecter can barely stop himself from laughing in Chilton’s face. 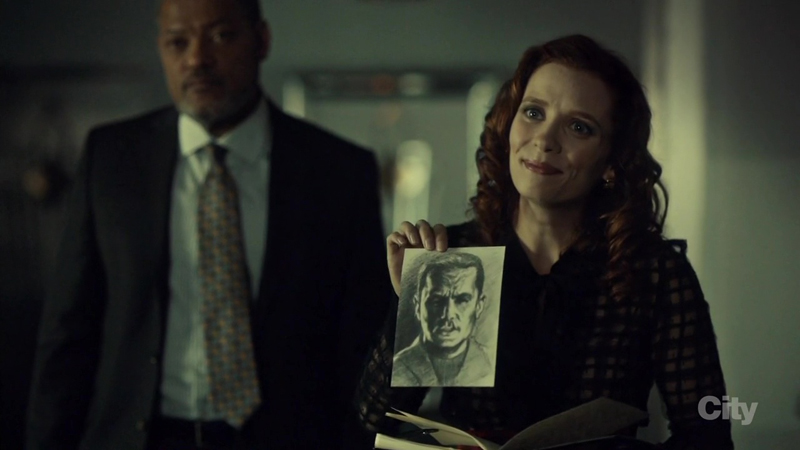 If Chilton does have a strength, it’s his ability to repeatedly survive the most horrifying violence that the show’s characters (and writers) can think to inflict upon him. In season one, he was barely spared a disembowling by Gideon, and luckily (or not, depending on how you look at it), only a few of his nonessential organs had been removed. In season two, after being framed for the Chesapeake Ripper’s murders, he was shot in the face by a brainwashed Miriam Lass (Anna Chlumsky); he survived that too, though, without his dentures and glass eye, he looks a lot like Haley Joel Osment in A.I. after a few bites of spinach. That’s nothing, though, compared to what episode writers Fuller, Jeff Vlaming, Angela Lamanna and Steve Lightfoot had in store for Chilton this week. A few weeks ago, I was speculating about how the show might handle Freddie Lounds’ grisly fate in Red Dragon and its other adaptations after appropriating its most famous image for Freddie’s fake-out death last season, and whether Freddie’s fate might be assigned to another character. In retrospect, of course it was Chilton. It couldn’t have been anyone else.

Anyone familiar with Red Dragon or its adaptations knew Chilton was royally screwed when Alana (Caroline Dhavernas) remarked that she’d have to be an idiot to participate in Will (Hugh Dancy) and Jack’s (Laurence Fishburne) plan to bait Dolarhyde (Richard Armitage), and then it cut immediately to Chilton preparing for his interview. Chilton’s terrible fate is inevitable from the moment Graham puts his hand on his shoulder in the picture accompanying the Tattler article baiting the Tooth Fairy as a psychopath and a homosexual; as a result, the scene where Dolarhyde swiftly executes Chilton’s bodyguards and grabs Frederick is morbidly hilarious. There’s nothing funny, though, about the famous scene that follows; as Chilton, glued to a chair, is subjected to a terrifying slideshow and lecture from ‘The Red Dragon’ before being forced to videotape a message for Will and, ultimately, suffering what is, in this version, a fate worse than death. Esparza, who has done an excellent job of crafting a hilariously pitiful character, is genuinely moving as the terrified Chilton tries desperately to reason his way out of the situation. 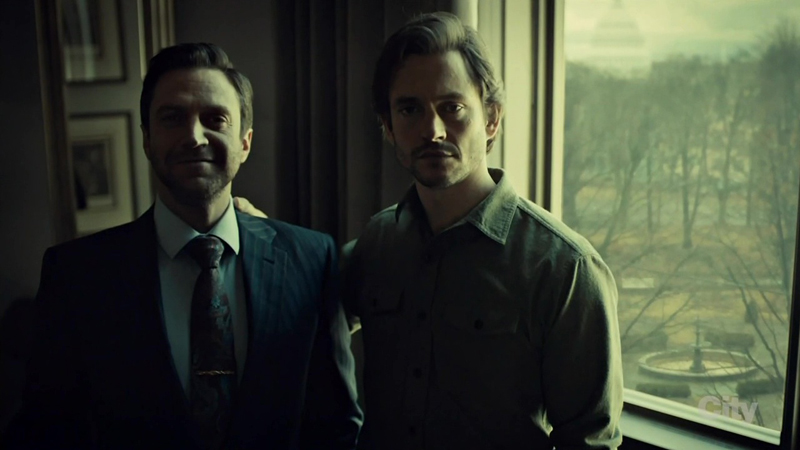 And it’s fascinating to contrast Armitage’s performance with Tom Noonan’s in Manhunter; which was all quiet, unsettlingly still, almost alien menace (“Here I… am.”). Armitage has done an excellent job of making the character his own rather than imitating his predecessors—his confrontation with Chilton is more aggressive, with a disturbing sexual undercurrent to his intimidation (both men are nearly nude throughout the scene). He and the writers have done a great job of emphasising the character’s hyper-masculine self-aggrandisement, which is then brilliantly undercut by having Reba (Rutina Wesley) show up with chicken soup in a tragically misguided attempt to patch things up with her boyfriend, and the Dragon briefly turns back into vulnerable, broken Francis Dolarhyde. I love that Hannibal finds these moments to undercut its characters’ self-mythologizing, which the show puts to dramatic effect but, whenever anyone might begin to find their murderous philosophies seductive, reminds us how pathetic these killers actually are.

Back to Chilton. I have mixed feelings about the way the episode staged the moment when Dolarhyde bites off Chilton’s lips. In both previous adaptations, this happened at an obscure angle that blocked the graphic detail, with Stephen Lang’s/Philip Seymour Hoffman’s tortured screams prompting our imaginations to fill in the rest. While the gore on this show has always been plentiful—and I’m not complaining—this particular instance felt excessive in a bad way, and it would be nice if Fuller at least occasionally trusted in the power of suggestion. On the other hand, I exclaimed several expletives when it happened, so I can’t say that it wasn’t effective. As with Lounds in Red Dragon, Chilton takes a ride in a flaming wheelchair and ends up as a crispy critter that is, God help him, still alive. During the episode, Fuller tweeted a picture of South Park’s Kenny, and should Hannibal continue in some form, one can only imagine what future horrors Hannibal might have in store for Chilton. The poor son of a bitch didn’t even get to write Blood & Chocolate. 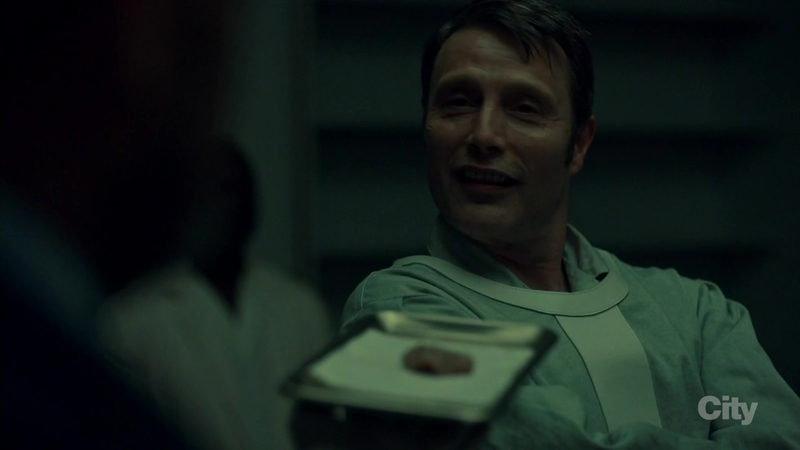 I’ve barely touched on the other characters this week, but they’re all in precarious shape for next week’s season (series?) finale. With Will basically acknowledging his complicity in Chilton’s torture to Bedelia (Gillian Anderson)—who is now his therapist, because the hell with it, I guess—he’s entering the last episode in a darker, more morally-compromised place than we’ve ever seen him before. Francis has seemingly lost any vestige of his humanity—it was devastating seeing him treat Reba so brutally after trying to protect her from the Dragon, and while he seems beyond saving (as Bedelia foreshadowed a few weeks ago), it remains to be seen if Will can stop him without completely losing himself and the happy life he’s built with his wife and child. As for Hannibal, he’s still Hannibal, and having more fun than ever playing the monster now that he has nothing to hide. As disturbing as this week’s episode was, it was worth it for the brief, hilarious shot of Hannibal surreptitiously slurping one of Chilton’s lips before cutting to Lecter smiling like the cat that got the cream.