American Gods doesn’t mess around. Right from the word go, this is a violent, beautiful, confusing drama that makes it clear it won’t be spoon-feeding information to us. In this riveting series premiere, “The Bone Orchard”, there are numerous scenes that occur with little to no context, and if you’re someone who hasn’t read Neil Gaiman’s source novel then you’re almost certain to be left with your head spinning. But while this is disorienting television, it’s also consistently entertaining, imaginative, and fascinating. American Gods makes masterful world-building look easy, as it guides us into a rich universe of enigmatic characters and surreal imagery that feels audacious and unique amidst the prestige TV landscape.

Ricky Whittle stars as Shadow Moon (“one outstandingly improbable name”), an ex-convict released from prison and roped into working for mysterious conman Mr. Wednesday (Ian McShane). In a somewhat unlikely turn of events, he gets out of jail a few days early because of the sudden death of his wife Laura (Emily Browning). While he’s on the way to her funeral, however, he encounters Wednesday for the first time and is less conned into working for him and more aggressively persuaded to. It may come down to a coin toss in the end, but the stoic Shadow is more desperate than he’d care to admit, having seemingly lost everything upon his release from prison and now finding himself with nowhere to turn. 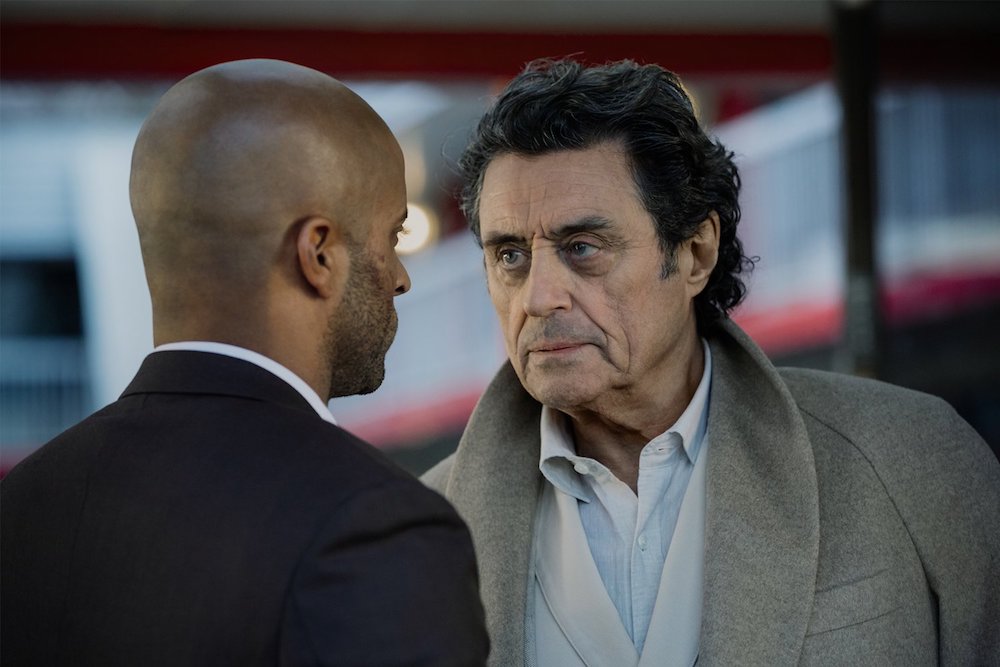 Atmospherically, American Gods has a lot in common with co-creator Bryan Fuller’s Hannibal. It’s similarly dark, moody, and shot like a sumptuous art film. There’s a wonderful depth of colour to the cinematography and beautiful flourishes like a time-lapse sequence at Laura’s funeral and a shifting aspect ratio whenever the show depicts bizarre visions and dreams. In this episode we see a buffalo with flames burning from its eyes, and it’s safe to assume things will only get weirder from here. Much of this visual splendour comes from the imaginations of both Fuller and Gaiman, but it’s brought to life so vividly by David Slade, who’s directed the first three episodes of the show.

This is also a show that’s not in a rush. Like Hannibal, it has a languid pace and delivers information to the audience in its own time. There’s no clunky exposition, thankfully, and seeing as it has a long list of characters, it’s a good thing that we’re going to be given ample time to get to know everyone fully. It really helps that we’re introduced to everything through the eyes of someone who’s just as new to all of this as we are, too, and Whittle does a tremendous job as the reserved but engaging hero. McShane is predictably excellent in a role that plays to his smooth-talking strengths as an actor, and the other standout performances from this first hour include Shadow’s cellmate, Low Key Lyesmith (Jonathan Tucker), and Pablo Schreiber as a bad-tempered leprechaun called Mad Sweeney who loves coin tricks. 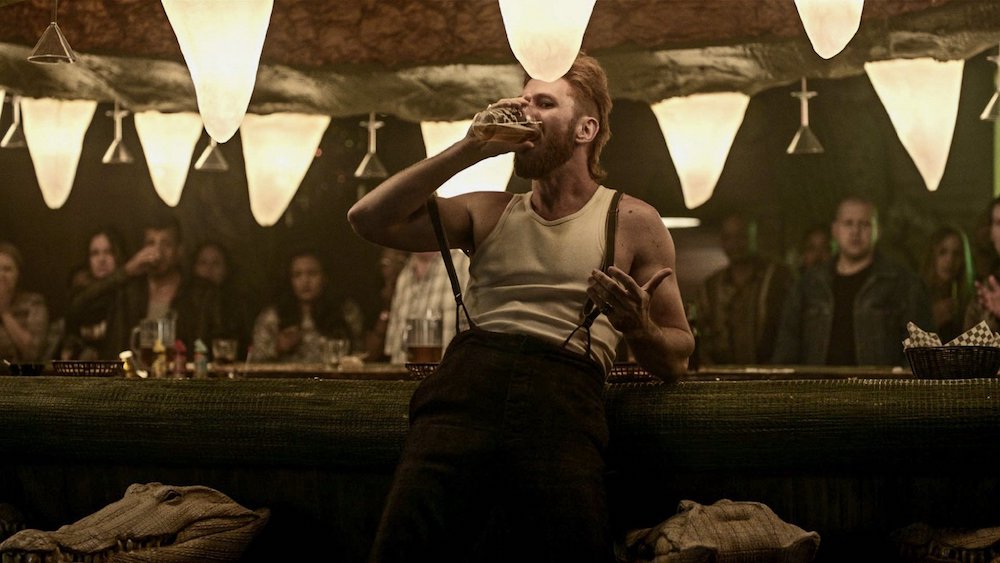 It may be a complicated picture to look at right now, but even for those who haven’t read the book, you can definitely take a stab at putting the puzzle pieces together. It’s clear that this story is all about America as a melting pot of numerous gods, both ancient and modern. The show opens with a jarring scene of Vikings landing on the “New World” thousands of years ago, only to be welcomed by misery, deadly natives, and a lack of wind to get them home. They resort to barbaric sacrifices and bloodthirsty battles to try and appease their God, Odin, leaving behind a carved statue of his likeness once they’re finally able to sail away.

In the present day, we see Mr. Wednesday dropping enough hints about birds and eyes to make it evident to us that he’s almost certainly an interpretation of Odin, and Mad Sweeney is probably just as much of a leprechaun as he claims to be too! More proof of Gods and their power comes in a shocking sex scene that sees a beautiful woman called Bilquis (Yetide Badaki) devour a man with her vagina after making him worship her. It’s a remarkable feat of camerawork and tone and a clear sign that these Gods are in desperate need of contemporary belief and worship. It seems unlikely that a God would call on a seemingly ordinary person like Shadow for help, yet that’s exactly what Mr. Wednesday appears to have done. 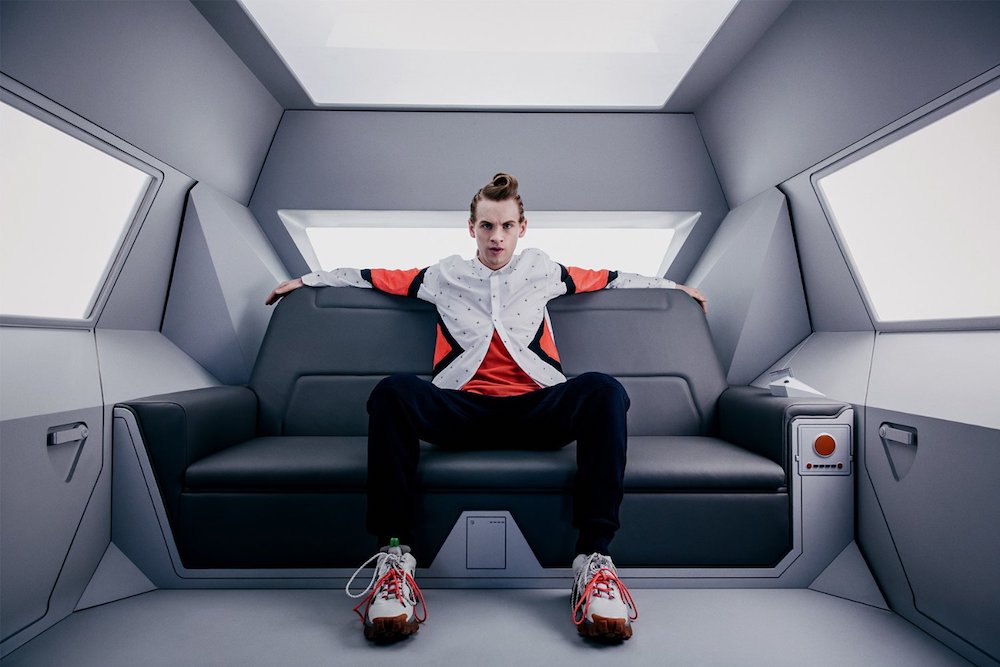 Quite why the Gods would need such help hasn’t been made clear yet, but this premiere has more than enough twists and turns to throw at us. At the conclusion of the hour, Shadow suffers the emotional blow of learning that his wife cheated on him with his best friend and they both died together in a car crash, before having to forcibly reject the drunken advance’s of his best friend’s wife Audrey (Betty Gilpin) who wants to get some posthumous revenge on both of their deceased lovers. Now that Shadow’s at his lowest ebb, he stumbles on a piece of weird technology that takes things in a completely different direction than anything in the rest of the episode.

Suddenly, at the end, we’re lurched into a highly futuristic and even more disorienting situation. The main character is confronted by an angry and impatient tech god, portrayed as a kid vaping on toad skins (Bruce Langley). This new character tries to find out just why Mr. Wednesday’s hired him as muscle, and when he doesn’t get a satisfactory answer he orders Shadow to be killed. So our hero’s duly strung up by the neck, and it looks like Shadow’s story is over before it has even begun, before he’s saved and the tech god’s goons are dispatched in the most violent fashion possible. Of course, the episode leaves it unclear who rescued him until next week. American Gods may be obtuse, vague, and sometimes confusing, but it definitely gives you enough to grab your interest and leaves you craving more.