Three new Doctor Who novels from BBC Books, out next month, all form ‘The Glamour Chronicles’, and those of you who’re regular readers of the books will no doubt be asking if this refers to the Glamour’s appearance in “The Ghosts of India” and “The Glamour Chase”. Indeed, they do build on the Glamour technology featured in those books—one capable of creating illusions and maintaining disguises, fastening onto your greatest fears and desires, and changing the fabric of Space and Time…. 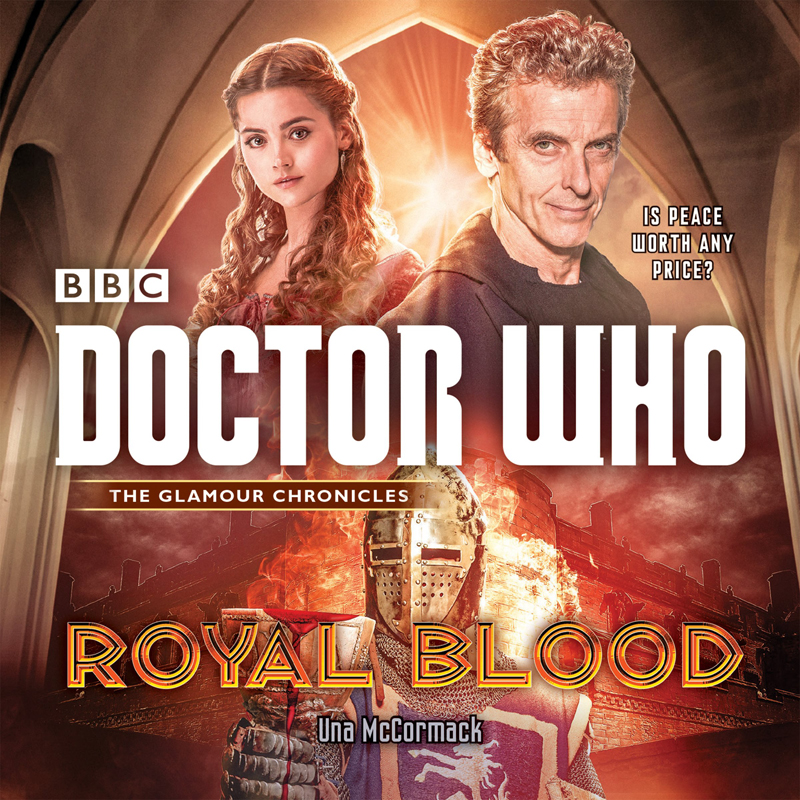 Up first is New York Times bestselling author Una McCormack’s “Royal Blood”, which sees her return to the pseudo-medieval trappings and themes of her previous Who novel, “The King’s Dragon”. The Doctor and Clara arrive in the dukedom of Varuz: a city-state in rapid decline, ruled by Duke Aurelian. McCormack paints an interesting picture of this city and its people—on the one hand determined by protocols and traditions, but also struggling to maintain their rule through technology. Their knights wield laser swords and their palaces are lit by electric light, but this brings the city-state no glory.

The Doctor and Clara rapidly become aware that the trappings of power, in technology bequeathed to the city from long-vanished ancestors, have taken their toll on the buildings and on the inhabitants… as war brews with their neighbour Duke Conrad and The Doctor’s counsel is sought by Aurelian. Clara, however, discovers that there’s a power struggle within Aurelian’s court and his wife Guena and his trusted friend Bernhardt are working behind the scenes to prevent war. One of the lovely stylistic touches McCormack uses is a first person perspective, courtesy of Bernhardt, that cleverly places the reader in the company of the ensemble in the chambers and halls of the palace.

“Royal Blood” tracks the intrigue and politics of civil war and the illusions and deceptions used by those in power and those who wish to overthrow them. In the foreground, Clara is used as a pivotal character to explore these aspects of the story, including Aurelian and Guena’s blood ties and relationship with their disaffected son Mikhail, and a curious friendship with an ambassador from Conrad who’s not what he seems. The Doctor tends to be in the background, more concerned with the arrival of Lancelot (yes, that one) on the quest for the Grail, a concept that takes the book into an exploration of authenticity and belief.

Aurelian’s power is fading and Varuz and the surrounding land is in decline much like King Arthur’s connection with ancient Albion. The Grail is a contradictory symbol; one of disillusionment, disaster, and of enlightenment and redemption. It compliments McCormack’s entertaining and thoughtful story about a Duke who is in denial about the reality of his city’s destiny, his son’s lineage and the death of tradition. 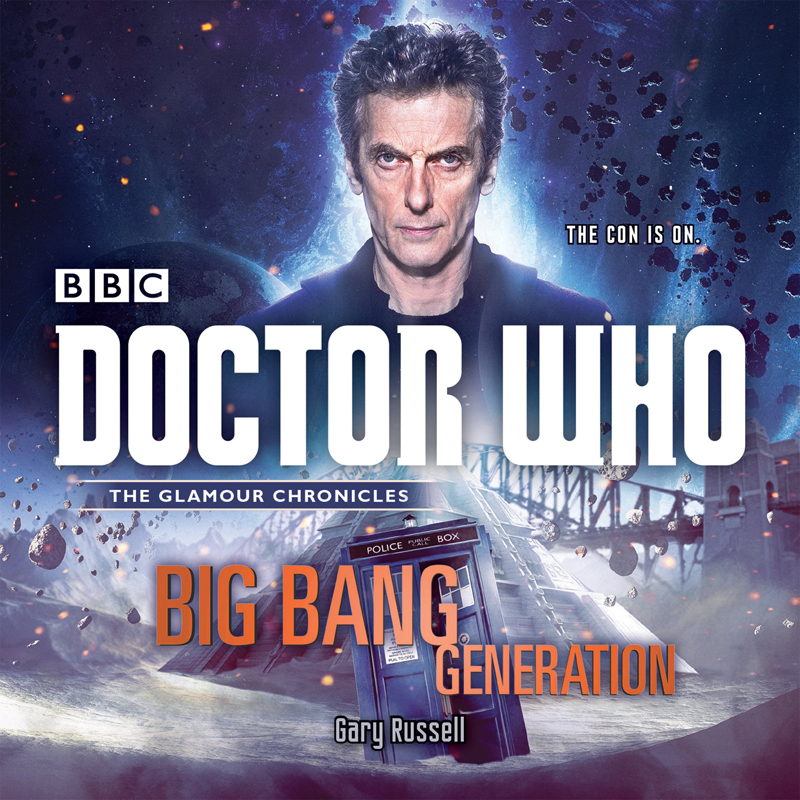 A complete change of pace is former Who and Torchwood script editor Gary Russell’s “Big Bang Generation”. Sans Clara in this particular book, The Doctor’s reacquainted with former companion and 26th-century archaeologist Professor Bernice Summerfield. For the uninitiated, Bernice (created by author Paul Cornell), who first appeared in the Virgin range of Who novels, begat her own spin-off stories when Virgin lost the license to publish original Who fiction, and has continued to appear in Big Finish audio plays, novels, and short story collections ever since.

If you’re unfamiliar with the character, don’t worry. Russell effortlessly brings you up to speed (and speed is the key word with this book) with her previous exploits, her extended family of son Peter (half dog-half human) and companions Jack (a red-eyed humanoid with grasshopper legs) and Ruth (a priestess of the temple of Poseidon from an alternate Earth’s Atlantis).

Russell adroitly unpacks this baggage while ensuring the characters are appealingly funny and heroic for those about to encounter team Summerfield for the first time. That aside, the book’s enjoyment comes from the barbed wit exchanged between The Doctor and Bernice as they run a high stakes con to save the universe from a time gobbling ancient artefact—the Glamour, lodestone, key… whatever it’s called.

If you enjoyed the Hustle-like team dynamics and time-twisting plot of the television episode “Time Heist” then you’ll enjoy this. It’s big, bold, breathless, and unashamedly references names and places in the Who universe and plenty of other pop culture icons—everything from the Church of the Papal Mainframe, Stacy Townsend, Ssard the Ice Warrior, and a riff on Donna Noble’s notion of the Planet of the Hats, to Top Gear, EastEnders, and Last of the Summer Wine.

Russell’s love of Australia—particularly Sydney and The Blue Mountains of New South Wales—provides the vivid backdrop to the Doctor and Bernice’s race to prevent galactic criminals, and a rival archaeologist, from possessing the Glamour, lodestone, key… whatever it’s called… to seal up a time portal which materialises as a giant pyramid in Sydney Harbour. The novel captures Capaldi’s skittishly grumpy Doctor perfectly, at the centre of something resembling a satisfying blockbuster summer movie. 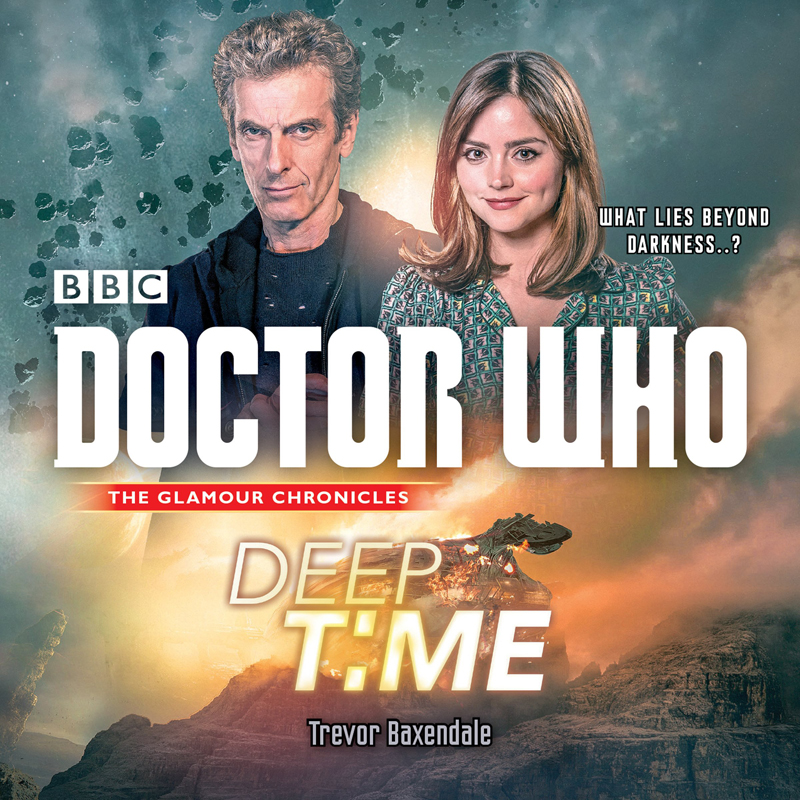 The final book in the chronicles is “Deep Time” by Trevor Baxendale; an award-winning Doctor Who, Torchwood and Blake’s 7 scribe. It takes us into the darkest reaches of interstellar space in search of an ancient civilisation’s long-lost network of wormholes. The Doctor and Clara join a group of explorers aboard the starship Alexandria, as they set out to locate the last existing wormhole used by the mysterious Phaeron race.

The Doctor is there to protect them from whatever they find at the end of the road, fearing that each crew member is already under the influence of the Glamour—that malignant, shape-shifting substance that absorbs and reflects subconscious cravings. As with all the novels in this sequence, the Glamour always “makes you want what you can’t have.” The Doctor also suspects that it originated with the Phaeron.

Baxendale creates an intriguing Christie-esque ensemble of characters (all with their own motives for reaching the wormhole), and pitches them all into a fight for survival when the Alexandria is set adrift in deep space and has to make a forced landing on a lost planet. These are all finely-defined people, and the most affecting is the touching relationship between the empathic astrogator Jem and the ship’s pilot Dan Laker. However, his ace card is the perfectly pitched characterisations of The Doctor and Clara.

The latter in particular is shown reacting and dealing with each calamity based on her own experiences as a teacher at Coal Hill and in her relationship with the late Danny Pink. The Doctor also gets a wonderful speech about how humanity’s survival instinct kicks in when facing insurmountable odds in beautiful but hostile environments. It packs as much of a punch as the classic monologue about what an indomitable species we are from “The Ark in Space”.

In this dark, atmospheric tale, their worst fears are realised by the time-hopping, unstable planet, when it tumbles back through aeons of evolution and Baxendale thrillingly pits the survivors against storms, avalanches, deadly plants and horrifying insects. Ultimately, they meet the ghosts of the Phaeron themselves, shadows of a ‘deep time’ that intriguingly also connect the Glamour to the ancient history of the Time Lords.

6 to See this January

6 to See this November

Competition: Win A WRINKLE IN TIME on DVD!