Legendary French-Swiss auteur Jean-Luc Godard is often referred to as one of the greatest film directors of all time. Since his rise to fame during the French New Wave movement, he’s always fought against mainstream filmmaking by challenging conventions and the conservative nature of the cinematic establishment in western culture. His constant search for new ways of communicating and experimentations, his philosophies and his political insights, continue to be extremely influential on cinema.

As independent, experimental cinema struggles more than ever against multi-million dollar blockbusters, it’s refreshing to rediscover the cinema of radical ideas that followed the 1968 student protests. Many of Godard’s films are known to not shy away from revealing his political views, clearly reflecting his profound knowledge and fascination with Marxist theory.

Thanks to a new Blu-ray box-set from Arrow Academy, we can now take an in-depth look into one of his most politically outspoken periods, marked by his collaboration with militant Maoist filmmaker Jean-Pierre Gorin. Those were the years of the Dziga Vertov collective — named after the Soviet pioneer director of Man with a Movie Camera (1929) — the group focused on relinquishing personal authorship in the interest of exploring film as a common effort to discuss political ideas (usually Marxist), critically deconstructing the fictitious nature of cinema, and challenging mainstream filmmaking notions.

This three-disc box-set takes us on a cinematic journey through rare, previously unavailable niche films and experiments that led Godard and Gorin to the highlight of their collaboration, Tout va bien (1972) starring Jane Fonda — which is not included, alas. 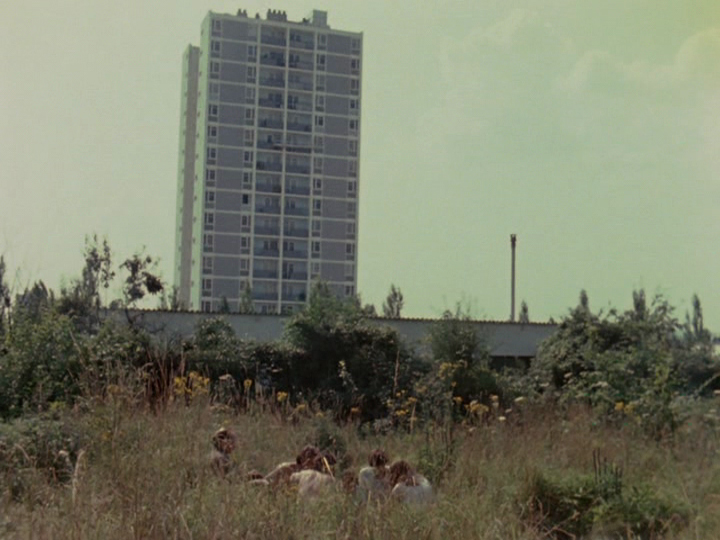 Un film comme les autres is a 100-minute long discussion between students and factory workers, following the upheavals and demonstrations of May 1968. The film is shot entirely on a grass field; the camera rarely focuses on the speakers’ faces, indicating how Godard prefers to highlight the importance of their conversation and exchange of ideas rather than personalisation. The protagonists discuss their revolutionary hopes and intents, the purpose of occupying schools and workplaces, the police’s response, the need for violent protest and its consequences.

Given the level of the ideas discussed (still incredibly relevant, but less talked about), it may prove difficult to comfortably sit through the whole conversation; however, the format is not much different from the modern concept of a podcast. Godard may not have made the most of the cinematic medium’s potential here, but Un film comme les autres is still fascinating and a good introduction to several basic concepts that will recur in other films from the box-set. 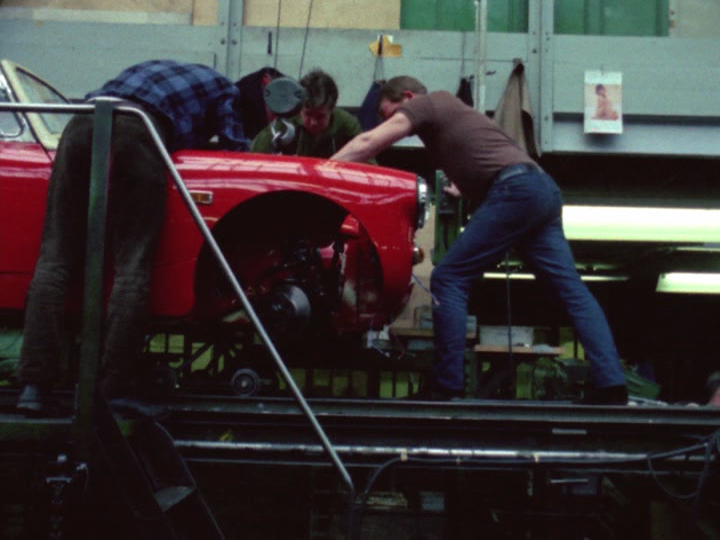 Godard opens with a particularly effective tracking shot of the vivid colours and noises of an automobile assembly line. The following part is dedicated to feminism, as narrated by a woman who stands completely naked in front of the camera. The nudity isn’t sexualised and serves more as a statement to underline the concept of liberation from patriarchal oppression. A third part gives space to a despicable man who reads a series of fascists messages declaring hate against minorities, immigrants, workers, and organised labour. It’s a rhetoric that’s evolved with time, and while it seems absolutely unacceptable now, its tone directly reminds of the worst right-wing speech we’ve become used to hearing nowadays. Perhaps today’s propaganda will sound just as vile in half a century.

These sections only last for about half of the 50-minute feature; the remainder of the film, not as peculiar, is dedicated to a group of men discussing Marxist political theory and their jobs, and a group of mostly young women organising a protest. The narrator often intervening in the background makes the end result rather confusing to follow.

Vent d’est is an open critique to Hollywood tropes and canons, and particularly the western genre. Godard creates what seems to be a film-within-a-film, with a group of character, ironically led by none other than Gian Maria Volontè, who appeared twice in Sergio Leone’s famous spaghetti-western trilogy.

Vent d’est continuously emphasises the secondary importance of cinema, and the submission of its aesthetic to the ultimate end of propagating revolutionary ideas. This is one of only two full feature-length films of the set, and at 90-minutes it’s long enough to present key concepts and go into more detail. It’s quite interesting to hear the narrator’s voice deconstruct cinema’s concepts and devices, but Vent d’est often feels overlong and poorly structured when it shifts to discussing Marxist theories. Still, some of its topics will resonate very well with those studying cinema: “the imperialist image of reality passes for reality itself”, the narrator points out, explaining how American films are not recognised for their fictitious nature, but rather mistaken for representations of an ideal world. 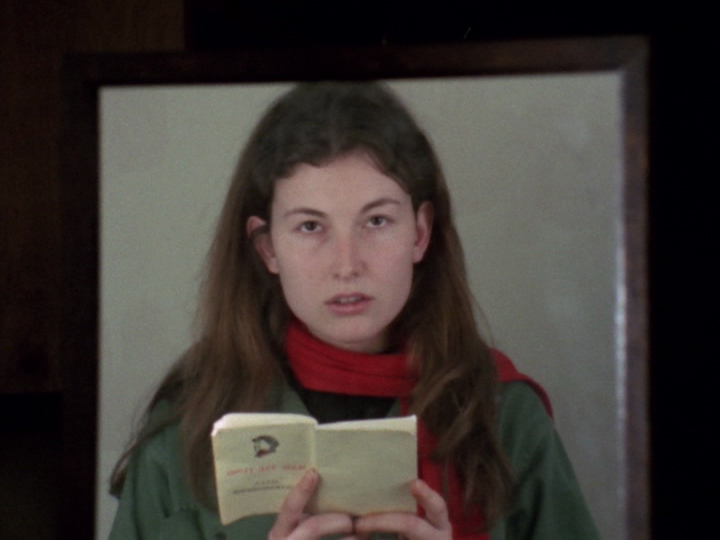 Lotte in Italia is an hour-long reflection on the struggles of an Italian woman trying to put Marxist theories into practice. More than once she appears doubtful and insecure, and although we hear her state she’s a Marxist, her behaviour doesn’t necessarily match her claims. The narrating voice often criticises her behaviour in the Italian capitalist society: is the bourgeois way of life influencing her? Throughout the film’s different sections, Godard allows the protagonist to explain how her thought process evolved in time.

The discourse is very complex and poorly structured, with the protagonist talking as if she was reading from notes put together without a coherent line of thought. To complicate things further, Lotte in Italia’s dialogue is mainly in Italian, with French dubbing recorded over but not only perfectly in sync. The English subtitles only partially help, giving very little order to a series of concepts that could be fascinating, but are substantially impossible to follow in this release. 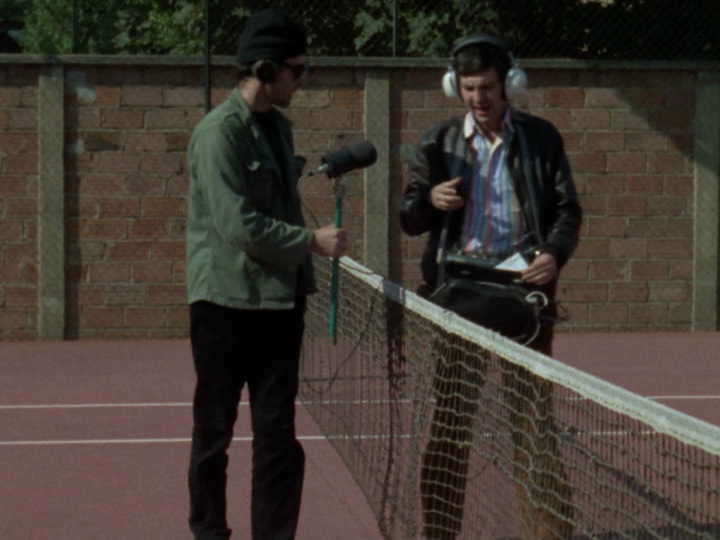 In this farcical representation of the Chicago Eight trial, which saw 8 Americans protesting the Vietnam war charged with conspiracy and instigation to riot, Godard offers his point of view on what he believes to be a preposterous, unfounded attack against the revolutionary spirit. Even the lawyer who defends the revolutionaries falls victim of the system, and “doesn’t realise that this is a bourgeois travesty”.

At 95-minutes, Vladimir et Rosa shows judges taking notes for their speeches on pages from Playboy, a myriad of loosely connected sequences that stretch to include discussions on feminism and the Black Panther civil rights movement, and Godard and Gorin commenting on the film while sprinting on a tennis court. The intent is clear, but even though Godard manages to illustrate the grotesque nature of the trial, his confusing use of editing and the length of the feature give him way too many chances to wander off point, creating a jarring experience. The result is a big missed opportunity. 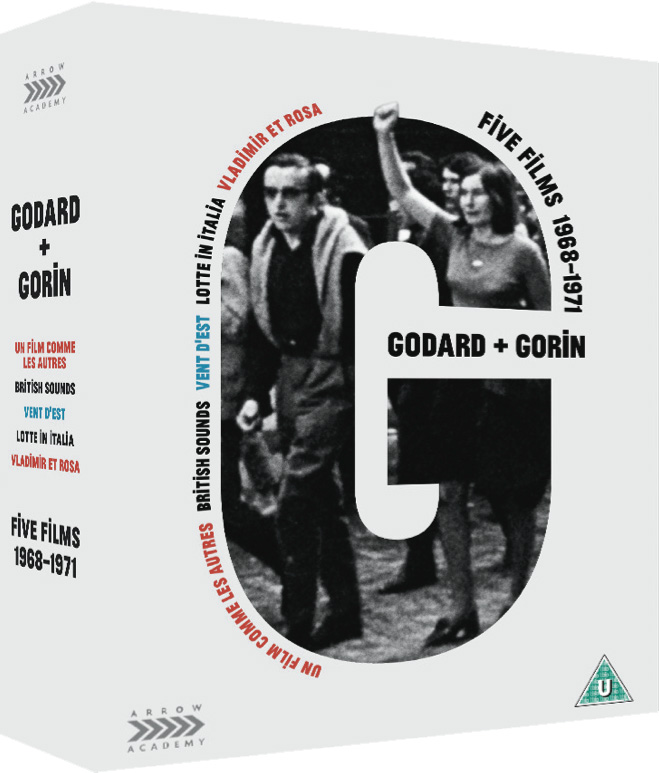 The third disc, which features Vladimir et Rosa, also contains a series of extras all viewers will find useful thanks to the insights provided by film historian Michael Witt. Witt introduces Godard’s filmography, then dissects and contextualises every feature in the set: these videos are easily catalogued by film title, and offer precious information that will help viewers feel a little less clueless after watching Godard’s politically militant cinematic experiments. The special features also include two commentaries on Pravda and Until Victory, two films of the Dziga Vertov collective that are not included in this collection.

Vidcaps sourced from the DVD, not the high-definition Blu-ray, owing to the format provided for review.