These days we have anodyne rom-coms starring hapless man-boys and shrewish career girls, but back in the 1930s and ‘40s (when women were allowed to be women and wit was valued), they had screwball comedy and Howard Hawks. From Bringing Up Baby and To Have and Have Not, to The Big Sleep and Rio Bravo, Hawks was a genius at capturing that perfect spark between a man and woman. His films are filled with quotable dialogue and memorable scenes, and none of them more so than the magnificent His Girl Friday.

A huge fan of Ben Hecht and Charles McArthur’s hit play Hold the Front Page, Hawks got Charles Lederer to adapt it as a screenplay, but couldn’t resist giving it his own twist —and what a twist it was. By switching the gender of the fictional Morning Post’s star reporter and making Hildy Johnson a woman, Hawks created the ultimate romantic comedy —a fast-talking frothy delight in which Cary Grant’s super-smooth Walter Burns attempts to lie, cheat, and seduce his ex-wife Hildy (Rosalind Russell) away from marriage to the upright Bruce Baldwin (an excellent Ralph Bellamy) and back where she belongs: with him and, almost more importantly, on the front page. 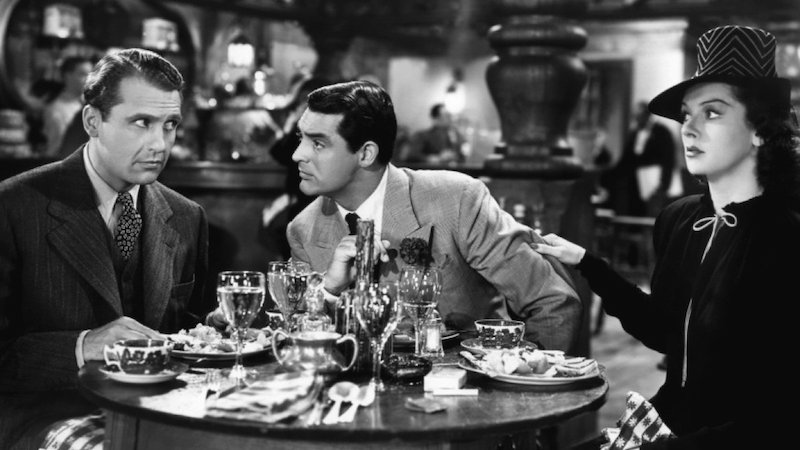 What makes His Girl Friday so wonderful is that it’s as much a love letter to an industry as to a relationship. Hawks’s bravura opening takes up in Hildy’s shoes through the hustle-and-bustle of the hard-working press room, and the film is filled with the adrenaline buzz of hitting a deadline, breaking a story, reporting a case that can change someone’s world. This is film with a romance at its heart but it’s also a love letter to doing your job and doing it well: Walter will do anything for the sake of his paper, while for all Hildy claims her newshound days are behind her, no one is fooled — this is a woman with newsprint in her veins and it’s only a matter of time before the clang of the presses calls out to her once again.

The essential premise is a simple one. Hildy returns to the office to break the news to ex-husband Walter that she’s remarrying. Never one to let a golden opportunity pass him by, and sensing her weakness for the industry she’s left behind, Walter promptly pretends that his current chief reporter is unavailable to cover a big death penalty case and that only Hildy can save the day.

He’s banking on her getting so caught up in the excitement of breaking news that she’ll remember why she fell in love with him, ensuring that he gets both his ex-wife and his star reporter back on side. It doesn’t play out quite as straight-forwardly as he hopes, of course, because Hildy is no spineless pushover but a smart, sharp-tongued force of nature who’s quite capable of making her own decisions and refuses to be dictated to by Walter, even as she does get caught up in the rush of breaking news. 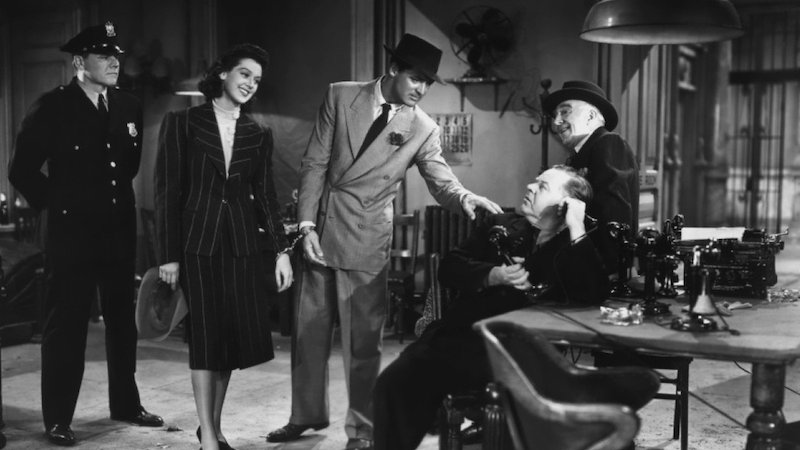 Grant and Russell have a ball with this material. He’s suave and charming yet slippery as an eel, attempting to bombard his ex-wife with bon mots and bamboozle her with words (the frenetic and endlessly quotable dialogue is delivered at 240wpm —most films clock in at 90). She’s more than his match; intelligent, opinionated, unflappable, amused by his antics but not fooled by them, and as capable of saying what she needs with a raise of one eyebrow as with a whole torrent of words.

Russell is rightly remembered as the queen of the screwball comedy, and Hildy Johnson is her finest role. “There’s a lamp burning in the window for ya, honey… here,” Walter remarks in the opening scene, proffering his knee. Her response is the perfect and withering “oh, I jumped out that window a long time ago.” She tells him that of course she remembers his wedding speech, adding sardonically, “if I didn’t remember it wouldn’t have to divorce you” and warns him “I wouldn’t cover the burning of Rome for you if they were just lighting it up!” 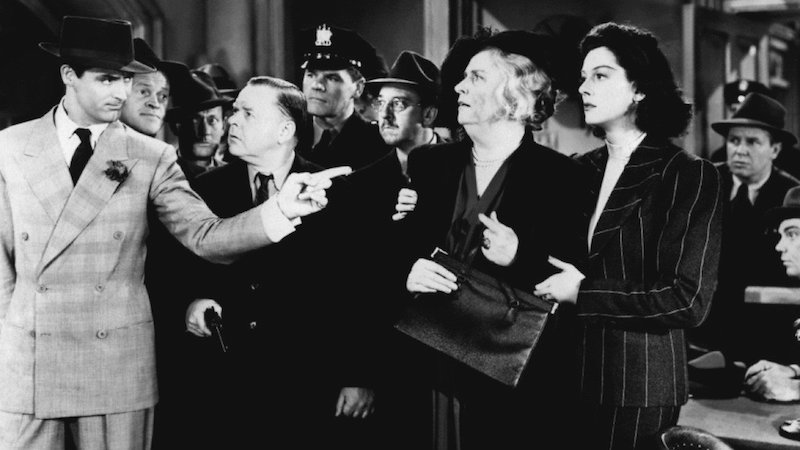 With dialogue that sharp it’s easy to see why His Girl Friday continues to influence writers 75 years after its release. Chief among those imitators is Aaron Sorkin, whose speedy dialogue nods very heavily to Hawks’s style. This flattery is most obvious in The Newsroom, which attempted to flip His Girl Friday by having a male reporter working for a female boss — but it failed because Sorkin too often forced Emily Mortimer’s Mackenzie Hale to play the role of clumsy sidekick to Jeff Bridges’ infallible Will McAvoy, failing to understand that His Girl Friday works because Hildy and Walter are both equals.

Nor can Sorkin compete on the romance front. Hildy and Walter might constantly provoke each other, but there’s real warmth and understanding there. While Sorkin’s characters flailed around searching for an ersatz idea of love, Hawks’s characters have loved and lost and travelled around the block and back. For all the quips and carry on they feel like real human beings and that too is part of this film’s lasting appeal.

Ultimately, His Girl Friday works because it makes you feel as though you are right there with Walter as he cajoles Hildy, and with Hildy as she tries to break her story. We’re on the sidelines with bewildered Bruce, and in the newsroom with beleaguered copy chief Duffy, as he struggles to get the paper out despite his mercurial boss’s many distractions. The famous disclaimer “it all happened in the ‘dark ages’ of the newspaper game —when to a reporter ‘getting the story’ justified anything short of murder” only adds to the romance, and, these days the added melancholy. Because for all the joy of that frenetic plot and the rush of the dialogue, for all the glory of Grant and Russell’s performances and the smart, sharp twists of the plot, watching His Girl Friday as a journalist today when that vivid, vibrant, vital world has long vanished is, honestly, enough to break your heart.