This 2014 documentary is being reissued on Blu-ray by Arrow Video to celebrate 2000 AD’s 40th anniversary. This means I’m sure its natural audience has already discovered it on DVD, or saw it years ago on its limited theatrical release. Nevertheless, it seems an appropriate time to revisit Paul Goodwin’s film about the UK’s trailblazing science fiction comic book, which thankfully has something to offer people who haven’t opened a page of 2000 AD in their lives…

It seems only fair to admit I’m not a devotee of 2000 AD, and I don’t have a great passion for the comic book medium (outside of an affinity for the work of Alan Moore and some others), but this documentary made me regret how my adolescence wasn’t touched by 2000 AD’s anarchic brand of anti-establishment violence (or “action” as one interviewee tactfully describes it). But as Future Shock! The Story of 2000 AD (hereafter Future Shock!) makes clear, being a 1990s teenager this perhaps wasn’t surprising. It was a somewhat fallow period for the comic, which was in decline as the original audience moved onto other things, not helped by Hollywood’s flop adaptation of their most famous character, Judge Dredd. 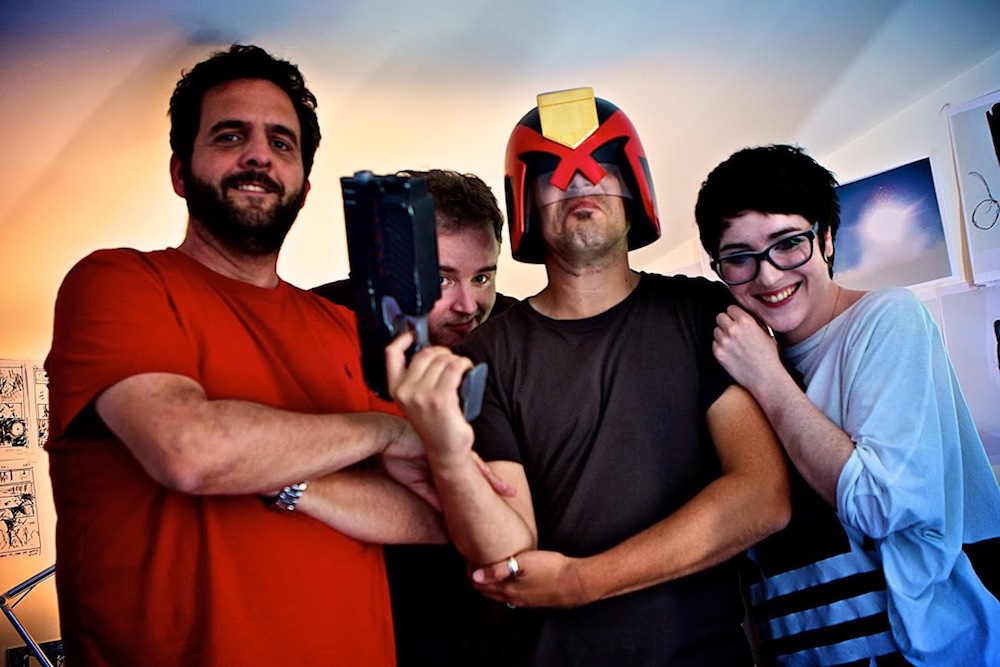 One thing Future Shock! does well is explain exactly how revolutionary 2000 AD was when it launched in 1977, and how it became a driving force for the industry in the ’80s during the “British Invasion” of talent into America to work with DC Comics and Marvel. The edgier style and temperament of 2000 AD was imported across the pond, through the minds of those who works on it in the ’70s and ’80s, and by extension modern-day superhero movies have also benefitted.

There are a wealth of people assembled to discuss their experienced working on 2000 AD, or its impact on their lives, with notable exceptions like Alan Moore (Watchmen), Mark Millar (Kick-Ass), and Garth Ennis (Preacher). Our main guides through the history of 2000 AD is its co-creators, Pat Mills and John Wagner, with support from Carlos Ezquerra, David Gibbons, and Kevin O’Neill. But many other luminaries appear, such as Neil Gaiman (Sandman) and Grant Morrison (The Invisibles). They’re all very enthusiastic and tell fascinating stories about how the magazine came to be, what its many editors wanted to achieve with it, the kind of social commentary stories indulged in during turbulent times, and how its bleak yet humorous tone seeped into the public consciousness. RoboCop (1987) was a famously 2000 AD-esque movie, taking several cues from comic strip Judge Dredd, and ironically doing a better job than their 1995 movie with Sylvester Stallone.

Future Shock! itself is largely almost 2-hours of talking heads, with animated comic book panels and occasional photographs and archive footage sprinkled in to keep things visually alive. It doesn’t matter, as the tales of behind-the-scenes tensions and office politics are enough to keep you interested. Pat Mills leaves the biggest impression on the documentary, as he’s still involved in the running of the magazine after 40 years and is liberated enough to speak the harsh truth about 2000 AD’s failings and dark days. A sexist marketing campaign of the ’90s (inspired by the success of the lads mags like FHM and Loaded) strikes a memorably bad chord.

The documentary does a good job making its subject matter feel like something you should be proud of as a British person, too. It’s been a UK success story that’s inspired a few generation of comic book writers and artists from around the world. I had no idea that director Nacho Vigalondo credits the success of Timecrimes to a time-travel story he read in 2000 AD, and the evidence for how its grim tone gave rise to the likes of The Dark Knight (2008), via the subsequent work of Alan Moore, is undeniable. 2000 AD wasn’t directly responsible for every change in the comic book industry, but it nurtured a great deal of British talent that steered things into a certain direction through US publishers.

I’m sure 2000 AD fans will devour this documentary and be frustrated not everything about the comic’s rich 40-year history is covered in sufficient depth, but for anyone with a passing interest in watching a documentary that covers most bases in an entertaining manner… Future Shock! is hard to beat and does its job. I certainly felt more knowledgeable about 2000 AD afterwards, browsed eBay for some back issues, and wanted to watch Dredd (2012) again.