Any fans of The Americans who, after last week’s season premiere, looked ahead to this week’s episode, had good reason to suspect that Pastor Tim (Tim AuCoin) wasn’t likely to survive an episode that shares his name. Sure enough, early in the episode, Elizabeth (Keri Russell) and Philip’s (Matthew Rhys) initial reactions to learning that Paige (Holly Taylor) spilled the beans to Pastor Tim are predictable—Elizabeth is quick to decide that killing Tim is their best option, while Philip argues that, as Paige will likely realise her parents are responsible for her mentor’s death, it will only drive her further from them. It’s one of The Americans’ fun perversions of familiar marital conflicts; take murder out of the equation, and it’s a debate most parents will have at some point.

Tim not only survives, he only appears once in the episode named after him, during a dream sequence. Elizabeth imagines Paige discovering Tim’s dead body in bed, only to turn to a man who suddenly attacks her; the dream ends, thankfully, just as he’s about to tear off her clothes. The man in Elizabeth’s dream—and I’ll admit that I had to look this up—is Colonel Timoshev (David Vadim), Elizabeth’s rapist whom she and Philip killed in the show’s pilot. Pastor Tim is spared partly because, after Paige confesses to her mother, both parents realise they can no longer make his death seem like an accident to their daughter. However, Tim also has that dream to thank for his living to preach another day; surely Elizabeth’s desire to spare her daughter that kind of life-changing trauma plays a role in her decision, whether she realises it or not. 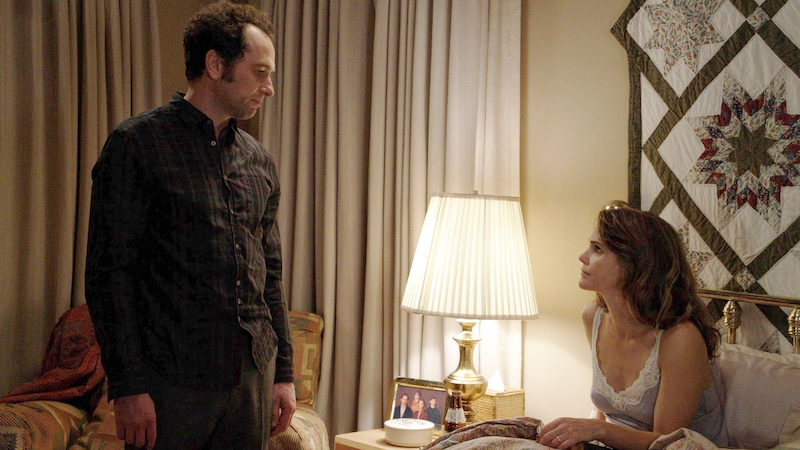 Elizabeth’s dream echoes Philip’s childhood memory of beating another boy to death, which we return to again this week. He confesses the memory to her after he kills someone else (we’ll get back to that), explaining that this is the sort of thing he talks about at EST meetings, and, as Elizabeth has always been staunchly atheistic, her sudden openness to cult-like pseudoscience signals a shift in her character. Not that Elizabeth’s softened—her shock at the news of her mother’s death quickly turns to distrust of Gabriel’s (Frank Langella) attempt to comfort her—but by the episode’s end, both her certainty about the immediate problem of Pastor Tim and their greater mission has been shaken. 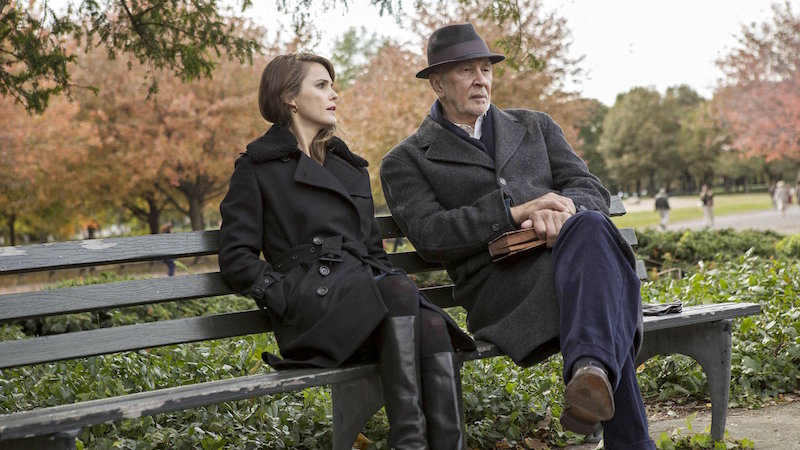 Meanwhile, Philip’s attempt to get rid of the Glanders vial ends in his killing a nosy airport security guard onboard a bus with a few asleep or distracted passengers. The Americans has always been great at using early-’80s hits in unexpected contexts, and the sequence, set to Soft Cell’s “Tainted Love” (which plays on one passenger’s Walkman), is no exception. The way the scene shows us Philip quickly sizing up his fellow passengers before offing the guard with quick, brutal efficiency, and the precision with which the scene is shot and edited, is coolly exhilarating, the sort of moment that we’d cheer on if it were James Bond or Ethan Hunt. But even putting aside the way that The Americans’ premise always messes with our loyalties, we’ve also seen Philip do everything he can to avoid killing this guy; worse, his contact leaves without the vial, meaning the guard’s death was completely pointless. Philip has had doubts about their mission from the beginning of course, but he doesn’t seem far from a breaking point. When Elizabeth remarks to Philip at the episode’s end that “We’re in trouble,” it’s true for more reasons than she realises.

The Americans has used Philip and Elizabeth’s trips down memory before to give us some sense of where they’re at mentally and emotionally, but the season’s emphasis so far on both characters being shaken by their pasts anticipates a greater shakeup in their lives. It helps, of course, to have a great cast anchored by two leads who can signal a major shift in their characters with a glance or a simple gesture. The long game can be frustrating with the show’s subplots—Nina (Annet Mahendru) been in a holding pattern since the end of season two, though the recent revelation that she’s had a husband all along, and her risking everything this week to help Baklanov (Michael Aronov), suggest that there’s a shift occurring with her too. And then there’s the question of whether Henry (Keidrich Selliti) is stealing Stan’s (Noah Emmerich) cologne (not the most pressing subplot, but I sure want to know). As always, The Americans is a slow burn, but the show’s writers have more than earned my trust at this point.