Alice in Wonderland—Tim Burton’s 2010 adaptation of Lewis Carroll’s fantasy story—was a gargantuan hit. Whether due to the star power of Johnny Depp as the Mad Hatter, the allure of Burton’s visual style, or the fact it was one of the first big 3D films after Avatar changed the game, Alice in Wonderland is currently the 23rd highest-grossing film of all time. The novelty of 3D cinema has plateaued in the years leading up to this belated sequel, but while the eye-popping visuals might not be the draw they once were, Alice Through the Looking Glass has plenty more to offer.

Director James Bobin (Burton stepped back to producing duties) has crafted a film that improves on the first in almost every way. Less frantic and frenetic, Bobin has reigned in and refined everything that made the first film good, and now males it great. The film stays perfectly true to Burton/Caroll’s vision, but tempers it to create a more rounded film.

The plot sees Alice (Mia Wasikowska), now a successful ship’s captain for her father’s trading company, finding her career at risk when former suitor Hamish threatens to steal her mother’s house out from under her unless Alice gives up her position and falls back to a humble clerk’s job—a far more befitting role for a woman of the time. While Alice contemplates this dilemma, she’s once again whisked off to Underland, this time to save the Mad Hatter, whose life force is fading fast. Alice must seek out Time (Sacha Baron Cohen giving human personification to the concept) in order to travel deep into the past of Underland and uncover the source of what ails her friend… 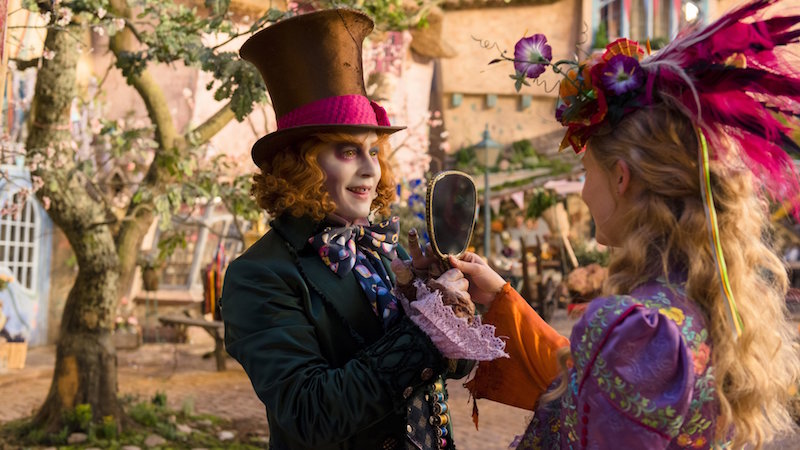 Johnny Depp (along with the March Hare) are far more subdued this time out, with Depp actually getting to do some acting, rather than just wheeling out a bemusing succession of silly voices. Visually, Depp was always a perfect fit for the Hatter, but here Linda Woolverton’s script gives him a proper story to get his teeth into, and the result is a performance that generates genuine pathos. And that’s part of what makes Through the Looking Glass that much better than its predecessor—the script gives all the major players proper story arcs and character growth. This isn’t a ‘kill the monster just because’ story like the first film—this one is directly informed by character. It has a point.

As the lead, Wasikwska is now more at home in the role, as Alice becomes a more proactive figure. Alice, in fact, has grown into quite an inspiring hero. When her mother tells her “You can’t just expect the world to be what you want it to be. Every girl has to face up to that”, it’s clear that Alice will do no such thing, and her agency throughout the film and her refusal to conform to either world’s expectations of her makes Alice a very worthwhile heroine. 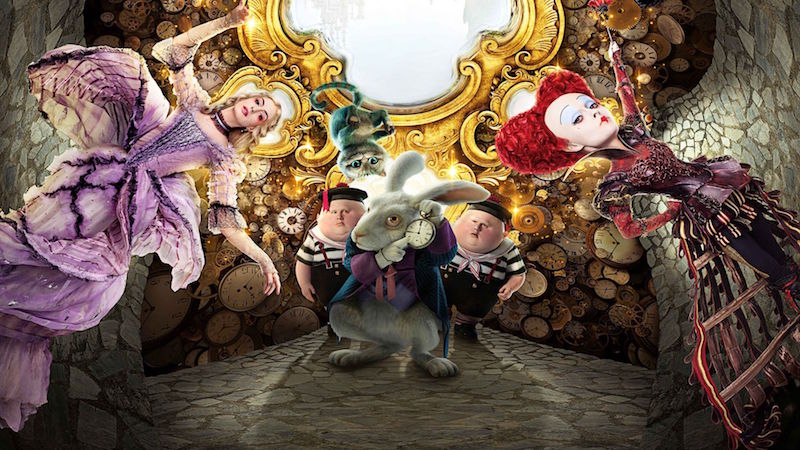 As Time, Sacha Baron Cohen is perfectly cast, and he too tempers his innate silliness just enough to help Time work as a character as well as a ludicrous cartoon. The script has plenty of fun with the premise of Time being a human person, although at the end of the day, it’s Helena Bonham Carter’s turn as the Red Queen that once again steals the show; her Miranda Richardson-from-Blackadder impersonation continues to be a riotous highlight, although here it’s undercut with a backstory that reveals how and why she is the way she is, adding agreeable shading to the ever-present Red.

The effects are vibrant throughout, and the screen bursts with little flourishes (a tiger pelt rug yawning in the background, for instance). But it’s less the visuals than the story that impresses. The film is about family; about making amends and cherishing what you have. Alice’s adventures through time—aside from being great fun—help to inform not only the backstories of Underland’s residents, but also her own situation back in the real world. This is a very well put together film.

It may not be particularly revolutionary, but as big-budget family entertainment goes, Alice Through the Looking Glass delivers pretty much everything you could wish for. It’s lively, visually stunning, boasts a brilliant heroine, tells a compelling story, and features a colourful cast of supporting characters that provide plenty of laughs. The high profile cast are clearly having a ball (Anne Hathaway’s ‘away with the fairies’ White Queen is an odd delight), and by the time the credits roll—after a lovely tribute to the late Alan Rickman—you’ll find yourself, against all expectations, hoping for a third instalment. Alice Through the Looking Glass is fantastic in every sense.

writers: Linda Woolverton (based on the novel by Lewis Carroll).