High-concept ideas are my weakness, and the supernatural horror genre is home to some of the best. Japanese manga Death Note has loose similarities to Final Destination (2000), and stronger ones to Chuck Palahniuk’s 2002 novel Lullaby, so perhaps it was inspired by those? Or, more likely, there was just something in the air during the turn-of-the-century following the success of cursed video J-Horror Ringu (1998).

Whatever the case, it’s easy to see why Adam Wingard was asked to direct a US remake: it has an imaginative and darkly enthralling idea at its core. The story concerns a high school student called Light Turner (Nat Wolff), who takes ownership of a mysterious book titled ‘DEATH NOTE’ that falls from the sky. Light soon learns this tome grants him the power to order anyone’s death, simply by writing their name inside its pages. Unfortunately, this deadly gift comes with pages of complex rules written by the book’s supernatural author, “Death god” Ryuk (Willem Dafoe), who arrives to haunt Light and compel him to keep using this dangerous but addicting power.

Death Note has a strong “what would you do?” quality which helps sustain interest, even through its rockier patches. It helps that the plot takes a few unexpected turns, both in how Light uses the book for controversial reasons, encouraged by unhinged girlfriend Mia (Margaret Qualley). 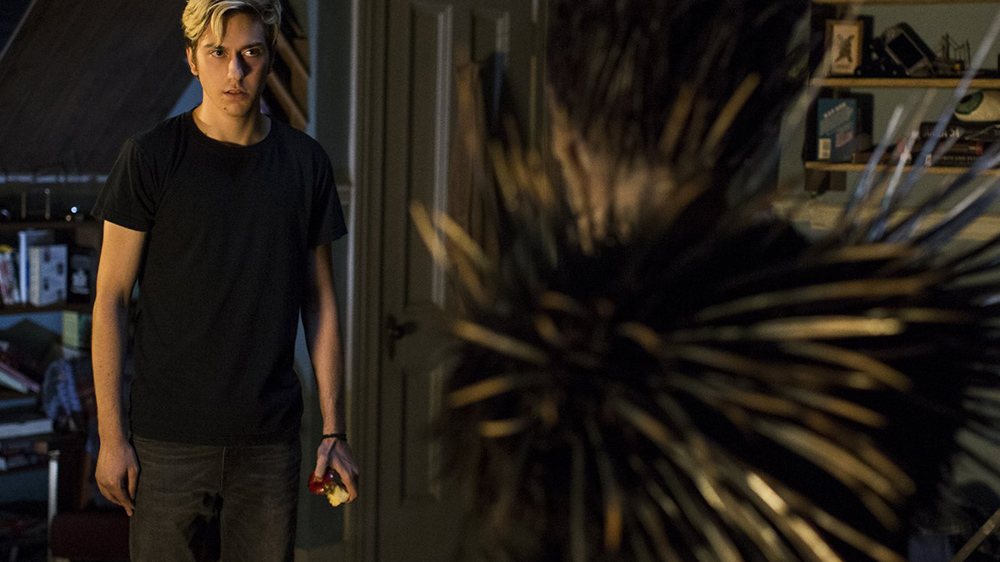 Together, the pair decide to create a cult figure to explain the often bizarre ways chosen victims meet their demise, and so the enigmatic “Kira” becomes a folk hero after offing hundreds of evil-doers and lowering the global crime rate. However, a highly intelligent detective gets assigned this case, known only as ‘L’ (Keith Stanfield), and he’s determined to figure out who Kira is, and how this murder spree is being perpetrated…

There’s a simple problem that undermines Death Note: it’s crammed with too many ideas the movie can’t adequately handle in 100-minutes. Considering the manga series had 108 chapters, and the popular 2006 anime lasted 37 episodes (totalling about 12 hours), it’s ironic that binge-watch maestros Netflix have turned Death Note into a single movie. It would have worked so much better in the miniseries format Netflix is renowned for. I haven’t seen it, but here was a Japanese live-action movie released in 2006, but it had a same-year sequel that suggests to me the story naturally requires some breathing room.

In the US remake, you sense the writers desperately cramming stuff into the limited time they have, and that’s very unfortunate. While their efforts means Death Note is never boring and moves like greased lightning, it’s often difficult to truly appreciate what’s happening. Or keep up with its wilder ideas and leaps of logic. The moment when the alter-ego of Kira is created, becoming a boogieman for criminals the world over, is explained in a quick montage sequence barely 30-minutes into the movie. That’s too much, too soon. 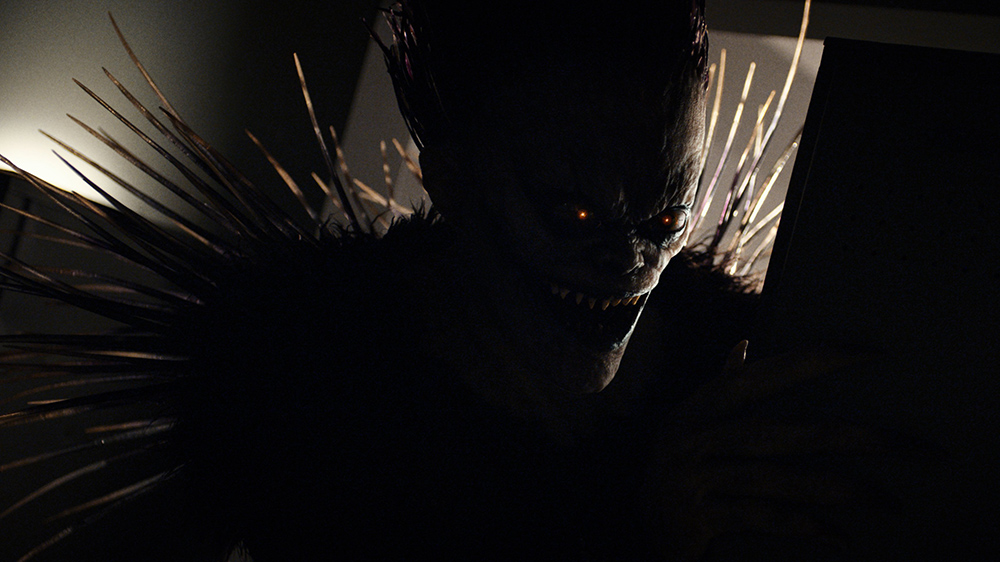 Occasionally, Wingard reminds us why he’s an exciting new voice in horror today, although he’s clearly on a downward curve after the high of You’re Next (2011), the promise of The Guest (2014), and the mixed response to Blair Witch (2016). It doesn’t bode well for his next film, Godzilla vs. Kong.

But he has a good eye for composition and his movie is fairly creepy at times, with a particularly good use of Ryuk. This demonic character is brought to life using motion capture, usually lurking out of focus in the background. Ryuk’s a tall silhouette of porcupine quills sprouting from his shoulders, blood red eyes, and a freakishly wide smile of razor-sharp teeth. Voiced by Willem Dafoe, he’s the best part of the movie, closely followed by Stanfield’s eccentric performance as a young Sherlock Holmes type.

Death Note cost $40 million (slightly less than what Blair Witch) and he makes good use of the money to ensure it doesn’t look like cheap direct-to-video fare. But I still think it’s a shame movies like this aren’t playing in cinemas, even in limited runs, although for mid-budget horror there’s a case to be made that teens now prefer a Friday night Netflix and pizza.

I didn’t expect to get caught up in the whitewashing controversy that plagued the movie’s develop, but Death Note almost goes out of its way to remind you of its Japanese heritage. 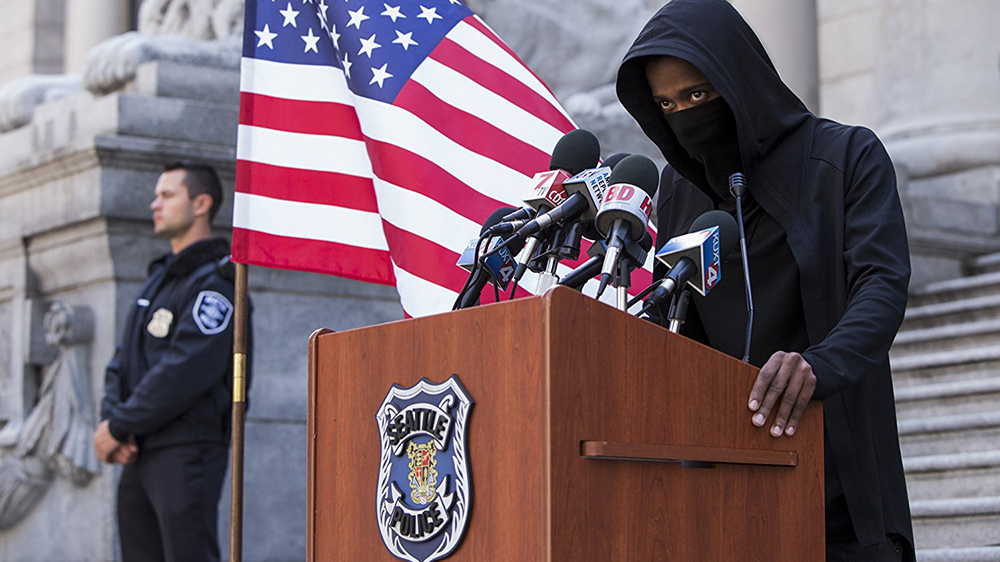 It’s perfectly reasonable to adapt an Asian story to an American setting, much like Gore Verbinski managed to with The Ring (2002), and Seattle is a promising choice of location. Like Japan, it’s a city where the suicide rate is high, and on some level that makes the movie’s grim subject matter a little thornier.

But it’s a problem that Ryuk is a Shinigami deity from Japanese folklore, as the story makes little attempt to explain the creature’s backstory in this version. They also keep the protagonist’s improbable name, Light, and one part of the story is convincing Interpol that “Kira” lives in Japan. There also numerous Asian-American actors on the periphery, so you wonder why they didn’t make their lead an émigré and align the story to its Japanese mythology more directly. It would have benefitted the story in many ways.

I hadn’t seen anything of this franchise before my first viewing, but I’m aware of the criticism it seems the script was stitched together by someone overhearing a fan outline the manga’s plot. I can believe that, because even to a layman Death Note feels rushed and hamstrung by its own ambitions and some poor decision-making. There’s always something that leaves you feeling shortchanged or confused, mostly in terms of how the tone vacillates and events jump ahead too quickly.

Some light research into the source material presented me with clear signs this movie was forced to be more customary and palatable, certainly in terms of making its lead a walking cliche. The American Light is a sulky misfit led astray by trying to impress a pretty girl, whereas the Japanese one is a popular and privileged young sociopath with a genius-level IQ. The latter is a tough personality to make sympathetic in the time available to a single movie, so I understand why the change was made, but it’s a shame the alternative means becoming a slave to genre conventions.

On the plus side, I was intrigued enough to start watching the Death Note anime series (also available on UK Netflix), so at least it’s become a gateway drug to the real fix.