How much do we have in common with those around us besides where we live? We look through our windows and see the same street. We have the same postmen and the same postcodes. The same sunrises. What about the people with whom we share a house? Here’s where things get more specific. We share milk, water, and television time. And tears, anger, and frustration. Whether or not the people of Crooklyn share personal characteristics is secondary; they share a home and all that comes with it.

On the brownstone block in Bedford-Stuyvesant, Brooklyn, neighbours are in each other’s pockets and on each other’s stoops. The streets are wide enough to accommodate noisy games of jump-rope and hopscotch. The open, spacious Carmichael house is big enough to fit five kids and two adults. Yet the kids on the street huddle together to play their games. The Carmichael Kids squeeze onto one bed to watch TV together. There’s space for everyone to find their own hot-spot and dry out in the ever-present summer sun but, instead, they stick together as multi-limbed organisms, held together seemingly by chewing gum and playground taunts. A community—a family—created by circumstance but strengthened by the choice to live totally in each other’s lives.

Arriving at the peak of writer-director Spike Lee’s busiest and most acclaimed period, Crooklyn moved breezily away from the epic grandeur of Malcolm X (1992) and landed in the world as if blown in by a gentle summer breeze. Written with inviting insight by Spike and his sisters Joie and Cinqué Lee, Crooklyn is a semi-autobiographical story set over the course of the summer of 1973. It follows Troy (Zelda Harris), a tough nine-year-old girl with four boisterous brothers and quarrelling parents, moving rhythmically through days that are good, strange, and heartbreaking. 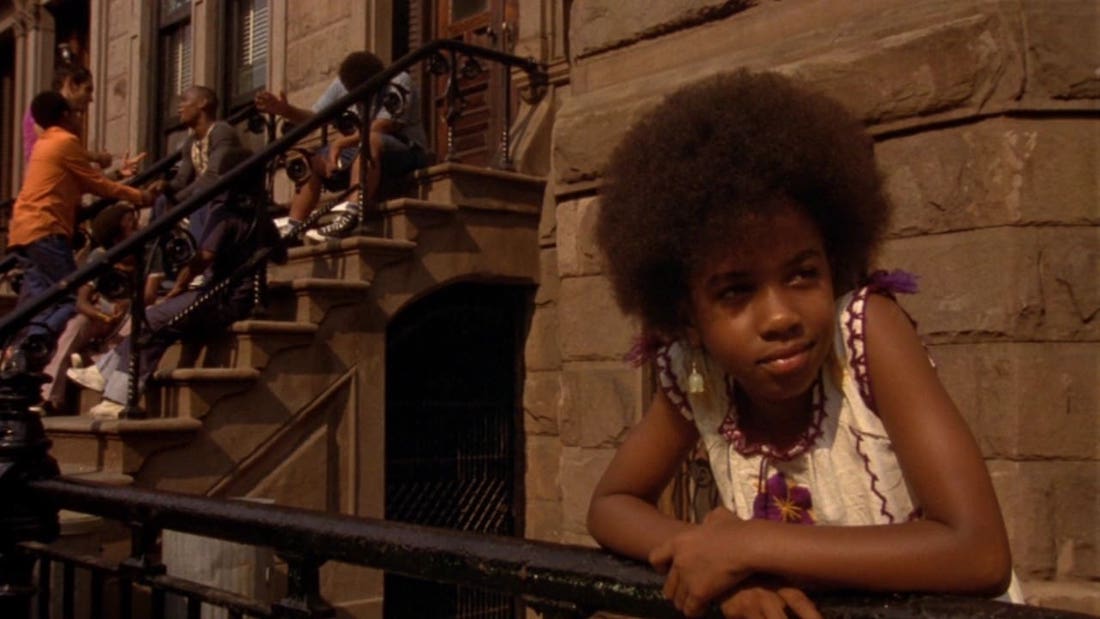 Originally developed by Cinqué and Joie, the sisters soon sold their script to their older brother Spike. He knew it had to be his next film and they knew he’d realise their story better than an outsider. Very much a collaborative effort, Crooklyn has a hugely distinctive voice within Spike’s early filmography. To go one further, Crooklyn has a hugely distinctive voice within the films of the 1990s. Nothing feels quite like it, not even Spike’s earlier Do The Right Thing (1989). Critics eagerly talk about ‘Black Cinema’, but Crooklyn highlights a wonderful and complex point: that Black Cinema is a label but not a genre.

Take for instance a few of the most critically lauded films by black filmmakers in the 1990s. There’s Friday (1995), Boyz N The Hood (1991), and Crooklyn (1994). A comedy, a crime drama, and a coming-of-age tale. None of these three films are alike, yet they’re all often labelled ‘Black Cinema’. When getting to grips with the work of the Lee siblings, one finds a block-party celebration of blackness, and the multitudes it contains. Black Cinema is no different—Spike’s body of work is a cornerstone of it, but within his filmography are historical epics, screwball comedies, and even musicals. Blackness and Black Cinema cannot be simplified to mean one thing.

Perhaps there’s an unfair requirement placed upon films by black filmmakers by liberal critics: that they must be about racism. That black characters must suffer. This, in large part, seems to be how many identify ‘Black Cinema’. Public Enemy blasted these stereotypes back in 1990 with their song “Burn Hollywood Burn“. And though Spike contends with these subjects in an unapologetic and dazzling manner, Crooklyn opens up the world of what Black Cinema can be a little further. Its characters don’t exist to suffer for the entertainment of liberal audiences. No, they groove along to Soul Train. They pile into the station wagon for family drives in the countryside. Put simply: they live. 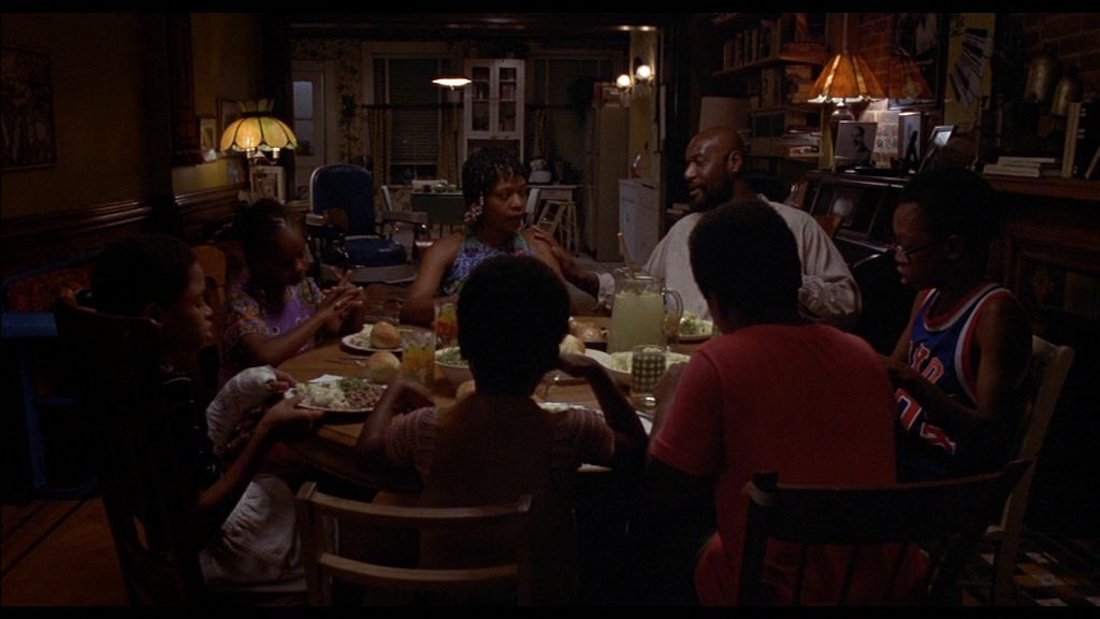 The script imbues the kids and their parents with such stunning detail and nuance that the smallest moments become moving. During one chaotic dinner scene, the youngest child, Nate (Chris Knowings), is complaining about his peas touching his chicken. His complaint is met with toughness by his big brother Wendell (Sharif Rashed). “Just move it over you little baby,” he tells him. But his insult is undercut by a little act of love—he takes his own knife and separates the food for his little brother so he can eat. Matriarch Carolyn (Alfre Woodard) is yelling orders at kids in-between bites of food. Woody (Delroy Lindo) is the soft-touch dad, smooth-voiced and too soft-hearted. He’s more interested in the soul and noise of the table than with helping his wife.

Spike shoots loose and with the quick-cut rhythm of what sounds like dozens of interrupting voices. Joie and Cinqué’s words overlap and clash. Half-formed insults here, pleas for calmness there. There is an almost constant soundtrack of vintage funk and soul throughout the film but, around the dinner table, the music stops—the family and their voices are the music. Scenes like this are stunningly human and acutely observed. They vibrate with the musical hum of life and celebrate the every-day magic that makes this group of people a family.

Later, after an argument over money between Woody and Carolyn snowballs into a seven-person melee,  you can still sense the indestructible love that exists between the family. Joseph (Tse-Mach Washington) puts his hand gently on his mother’s shoulder. When it’s time for Woody to leave, he’s not going to do so without hugging his children. Even combing her children’s hair is a tough but tender act of love for Carolyn. The children’s knots might catch painfully in the comb and in that moment they might resent her, but there’s also a beautiful intimacy in it. Watching the family interact is a reminder of the physicalness of childhood—hugging your parents, punching your siblings, slapping your palms on the creaking bannister as you stampede downstairs. 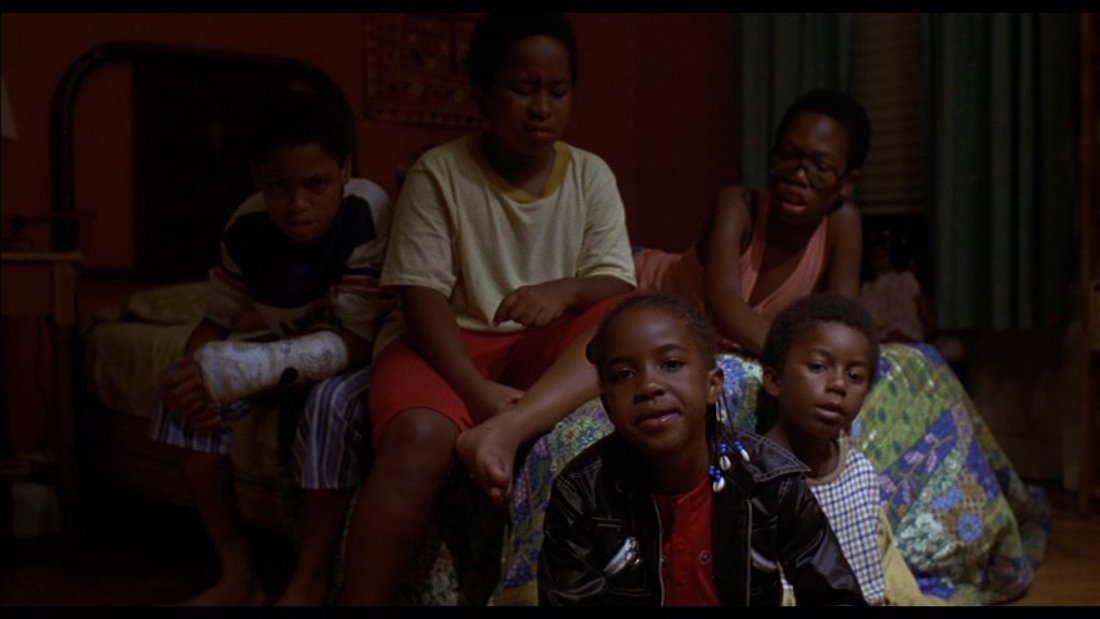 It isn’t a film glib enough to wear rose-tinted glasses, but it’s certainly one that yearns for something lost to the past. A time and place that was once familiar but is now very distant. It’s episodic in structure, much like our memories. We remember certain days and events, but it’s a lot harder to remember chapters of our life from start to finish. Do our lives even have chapters? Or is a season—say the summer of 1973—just a mass of hectic mornings, cartoons on TV, and half-remembered conversations?

In one section of the film, Troy is driven by her family to somewhere in the South to stay with her aunt and uncle. It’s a suburban home decorated with a kitsch eye. Nobody swears. On television isn’t Soul Train but a deeply uncool couple singing about outrunning the devil. The propulsive songs of the film are replaced mostly by Terence Blanchard’s ironically saccharine score. Spike even changes the aspect ratio in these scenes; as a result, proportions are squashed and stretched. This is the world from Troy’s point of view. They could even be her memories; they’re almost certainly Cinqué and Joie’s. There’s a sour dreaminess to the sequence, like a perfectly formed cake with strychnine in the icing. It plays like a subjective memory, a hyperbolic recollection of homesickness.

We don’t know exactly how long Troy stays here, but it’s long enough to know she hates it. “Aren’t you glad to be away from the crazy people in Crooklyn, New York?” asks Carolyn in a letter to Troy. The answer is a resounding ‘no’. Being driven back to the city from the airport, she tells her uncle the South was “too slow”. On the soundtrack, the R&B songs resume. If memories are hazy and unreliable, then at least a few things are definite. Like Crooklyn. When Troy’s back home, the same people are still hanging out and sniffing glue. The house is still standing. The neighbourhood is much the same. Yet Troy, newly returned from her voyage to ‘The South’, sees things through fresh eyes now… perhaps as a filmmaker can with 10 years of distance. 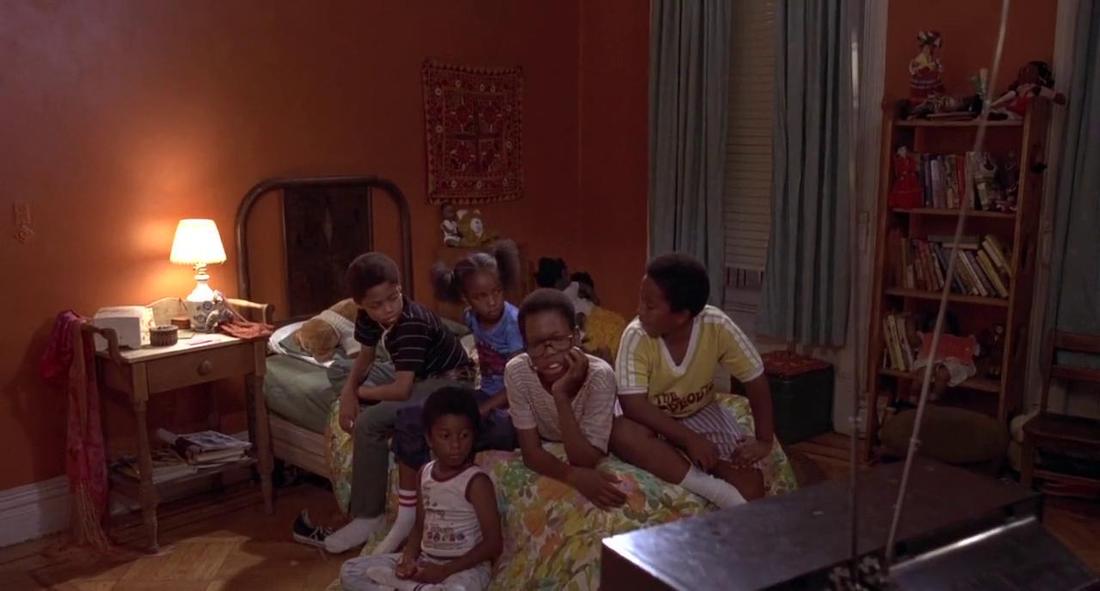 A new tree grows on the street, and Carolyn isn’t home. The pain in Crooklyn, when it comes, is moving without indulging into over-sentimentalism. It’s the subtleties that kill. Tony Eyes (David Patrick Kelly) is the hermetic oddball neighbour who makes a racket and is sworn enemies with the Carmichael children. Yet on the worst day of those kids lives, he’s outside his home, paying his respects, visibly heartbroken for the kids. When Troy can’t process the loss of her mother, she vomits instead of crying. Her dad doesn’t break down crying with her. Instead, he holds her tight and wipes her mouth with a cloth.

A quiet strength fills these people, a strength gleaned not from solitude but from sharing a city, a block, and a building. Woody becomes the father he should always be not when he’s down in the basement playing his piano, but when he’s making his kids toast and holding their hands on the hard days. When he’s living with them not just amongst them. The Lee siblings created a piece of work that isn’t just an empathetic ode to their childhood, but a love-letter to community and family. If Do The Right Thing wondered how people in Brooklyn are supposed to live together, Crooklyn wonders how they’re supposed to live apart.

A core of our personality is developed in those early years, and in the places that we lived. We each have our own Crooklyn, and we each secretly suspect that if we went back there now, we might find our younger selves playing outside, carefree. Unaware that one day we’d be looking back and thinking of it as our ‘story’. Crooklyn’s melancholy is alluring, but like Sean Baker’s magical The Florida Project (2017), it shouldn’t be taken lightly just what a joyful celebration it is. Of blackness, womanhood, and childhood. And the city.

If we think of Black Cinema itself as a city, then it’s surely filled with neighbourhoods, each unique yet linked to its neighbour by proximity. Look closer at each neighbourhood and you’ll find rich little worlds within worlds. Stories, voices, and songs fill their air. And there, hanging out on a stoop, taking a trip down memory lane on a languid summer evening is Crooklyn.

It’ll always be there, waiting for us to return.