After “An Obol for Charon” led to a literal evolution of Saru (Doug Jones) as a Kelpien, having survived the “terminal” onset of Vaharai and emerging with renewed strength and confidence, it prompted a lot of questions about where his story would go next. I didn’t expect Star Trek: Discovery to return to this subject a mere two weeks later, however, but “The Sounds of Thunder” did so with a very emotional and enlightening hour of drama.

My only issue is that writers Bo Yeon Kim and Erika Lippoldt (who also wrote the Short Trek episode “The Brightest Star” this episode bookends) appear to have dealt with a huge part of Saru’s new character arc prematurely. It’s like seeing Odo from Star Trek: Deep Space Nine finally meet his people, the Changelings, and then squeeze year’s worth of intrigue and development into the very next episode. I mean, sure, you can do that, but why would you want to? What’s the rush? “The Sounds of Thunder” felt like the big conclusion to a story that needed a season or two to breathe. 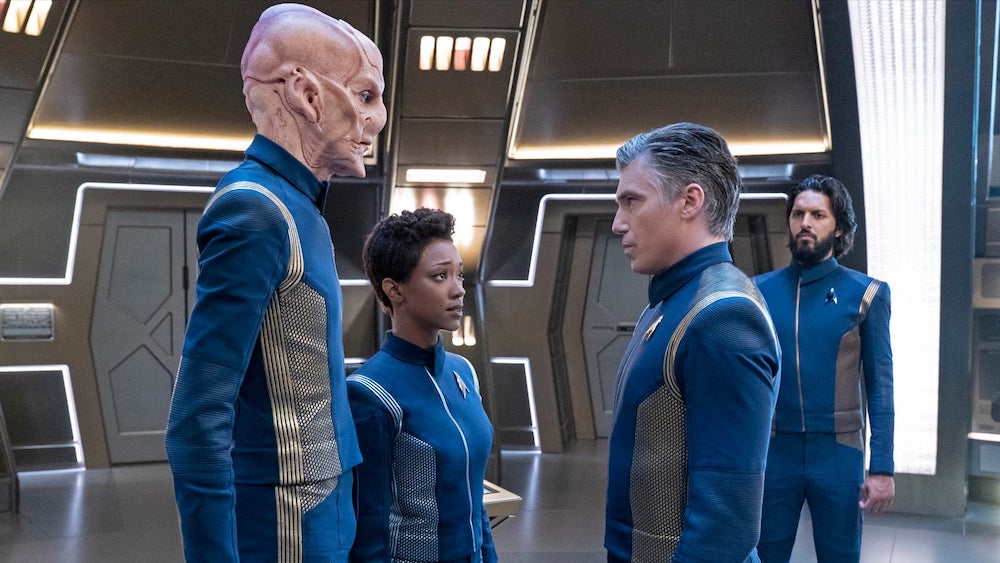 This week, another red signal appeared over Kaminar, Saru’s homeworld. That can’t be a coincidence and, by the end of the story, it does seem likely the Red Angel is guiding Discovery to certain places in order to do good deeds. Does this mean the mysterious entity is benevolent? Does it just want help? Is it one creature or a race of dogooders? Or are its motives more complicated? And is Ash Tyler (Shazad Latif) correct in theorising the Red Angel can travel through time? Answers will have to wait—probably for Spock to turn up—because this episode was more interested in having Saru reunite with his sister Siranna (Hannah Spear), whom he left 18 years ago to join Starfleet when he grew suspicious of the Kelpien way of life. Only now he knows for certain that the Ba’ul (advanced aliens that harvest Kelpiens like cattle) have been oppressing his timid species for centuries.

What helped this episode click, for me, is that I’m fascinated by the dynamic of the co-existing Kelpiens and Ba’ul on Kaminar. It’s what would happen if cows evolved to become sentient, but mankind still enjoyed eating them so much we brainwashed thousands of ‘cow-people’ into believing they exist only to be eaten and must offer themselves up for slaughter to keep the harmonious “balance”. Only now, Saru can unexpectedly return home and hopes to convince his sister there’s more to life than living peacefully in small villages waiting to be harvested by unseen beings that lie to maintain a quiet tyranny. 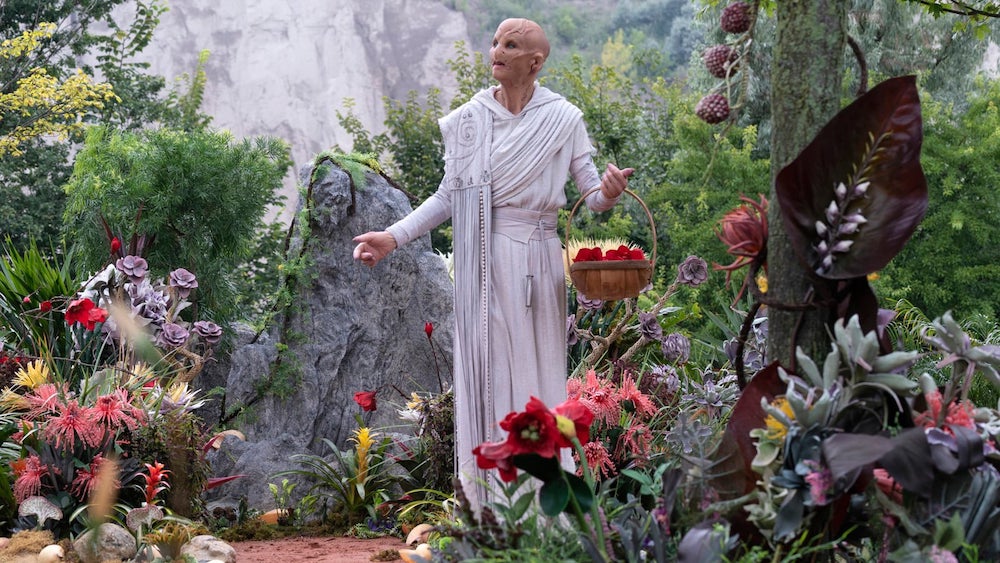 The episode also did a fine job showcasing the Ba’ul as terrifying villains, too; first with their audio-only transmission to the USS Discovery where they spoke to Captain Pike (Anson Mount) in an unsettling rasp, then with a display of their technological might by encircling Discovery with several of their obelisk-shaped ships, and finally with the reveal they’re tall and spindly beings with long hair that look like they’ve been dragged through thick oil. The VFX for the sequence where one Ba’ul appeared before Saru, emerging from a black puddle like a nightmarish mix of Venom and Sadaku from Ring (1998), was very impressive. Theirs is quite a chilling horror monster design for a family-friendly show, no? 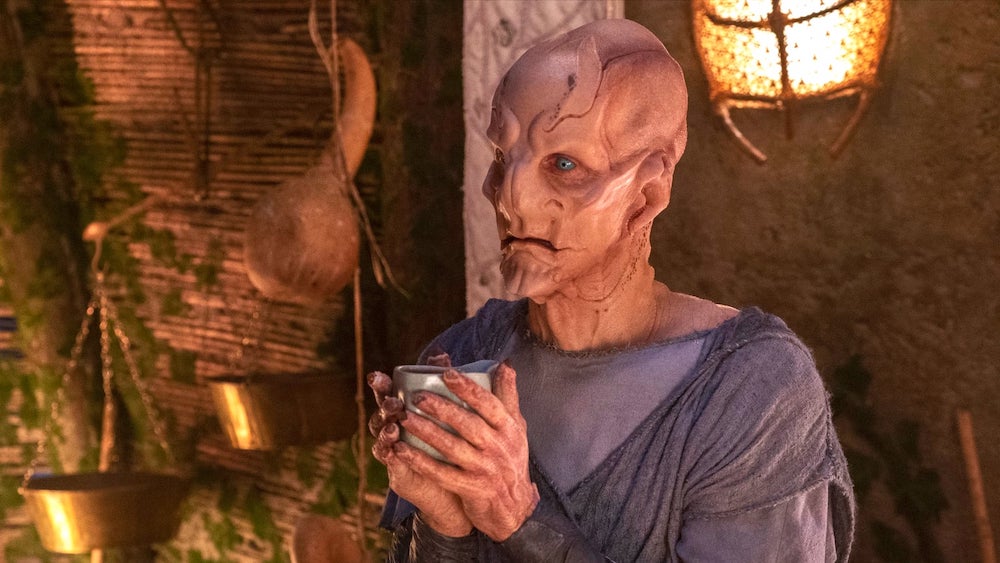 It’s also fascinating to see the personality change Saru is undergoing, together with a new physical trait. His inclination to be scared is more inhibited, which means he’s also less concerned about upsetting people and stands his ground more easily. It was a nice touch to have Saru fail to immediately get up from the captain’s chair when Pike walked onto the Bridge, then uncharacteristically speak up for himself when an ignorant Ba’ul was ordering Pike to hand him over. I’d hoped the show would develop Saru more, and this episode managed that by giving him more of a backbone. It was also a fun surprise when Saru’s missing ganglia emerged from his head after he was threatened by a Ba’ul, but instead of being a reflexive warning of danger the ganglia now shoot quills towards any enemy. Doug Jones was once again marvellous in this episode, showing a different side to Saru without us feeling he’s a totally different person. 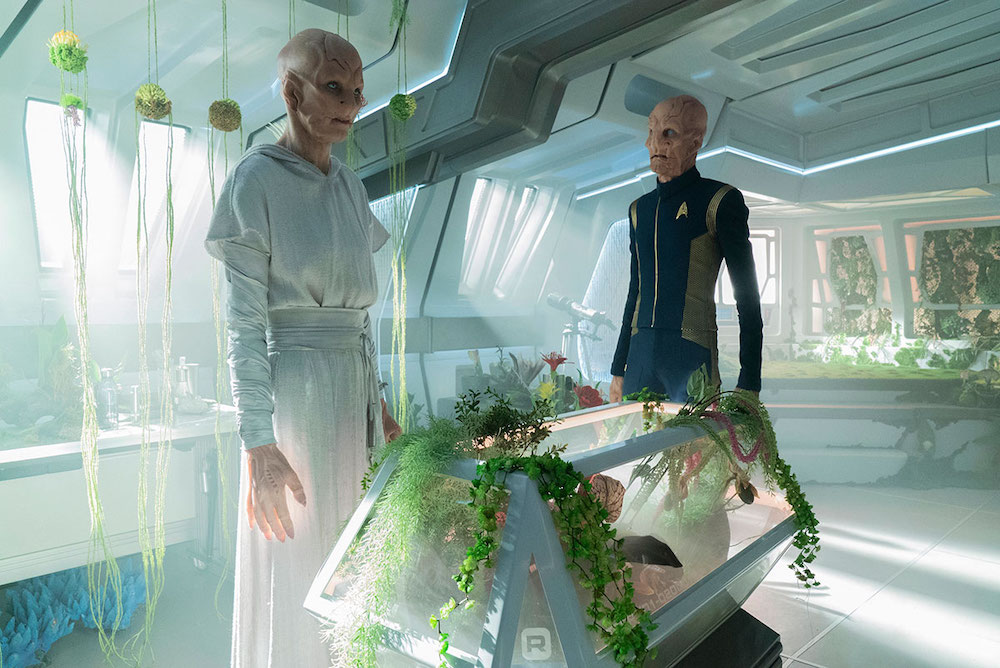 The big twist, utilising information given by the alien sphere from “An Obol for Charon”, that Kelpiens and Ba’ul once existed in a reversed power dynamic, was a cool and unexpected touch. It was revealed that Kelpiens mature into deadly predators after an adolescence of cowardice, and they once used to prey on the Ba’ul, who eventually turned the tables by using technology to protect themselves and developed a culture that kept the Kelpiens subservient and ignorant of their apex predator origins. I’m not sure how plausible this is, and quite why the Ba’ul look so physically monstrous - wouldn’t it have made more sense if they were even more faint-hearted than the Kelpiens and hide behind tech that makes them seen ferocious? But I appreciated the twist nonetheless.

There was even more debate about General Order 1 (the precursor to the famous Prime Directive), which Star Trek: Discovery’s characters seem to treat with less reverence than we’re accustomed to on other Trek iterations. Here, Michael (Sonequa Marton-Green) was beaming down to Kaminar to accompany Saru, and they got heavily involved in defending a pre-warp species from a civilisation that isn’t under their jurisdiction. I don’t disagree with what Pike did, but it perhaps could have been debated more. Just the idea that the Federation is okay with letting the Ba’ul predate on a brainwashed species when they have replicators that would eliminate the need, is an area of conversation the episode didn’t bring up.

Overall, I expected to find “The Sounds of Thunder” a bit of a drag because “The Brightest Star” wasn’t my favourite Short Trek instalment, but it was actually another fine example of bread-and-butter Trek. I enjoyed how tense and terrifying it became, and it was enjoyable to see Saru lead his people to a new future. I only wonder if the Ba’ul were correct and Kelpiens mature into dangerous and bestial people, or if that was a total fabrication. It might be interesting if Saru started to struggle with the two sides of himself: nature versus nurture, so to speak. Again, my only real negative is how this episode tied up a lot of loose ends the show could have spent a little more time on.

HAP AND LEONARD – Season One