John Carpenter's BIG TROUBLE IN LITTLE CHINA was released across the US on this day, 30 years ago. To celebrate, we've investigated the origins of this flop summer movie from 1987 that became a cult favourite...

Big Trouble in Little China started life as a screenplay by newcomers Gary Goldman and David Z. Weinstein; a western involving a cowboy called Wiley Prescott who loses his horse and gets entangled in a kung fu adventure involving elements of Chinese fantasy. In 1982, they submitted their script to Paul Monash and Keith Barish (executive producers of TAFT Entertainment Pictures), who were concerned the 1800s time period was having a detrimental effect on the script’s dialogue and style. Goldman rejected their criticism, and was removed from the project after refusing to update the screenplay to a modern setting.

W.D Richter (director of The Adventures of Buckaroo Banzai) was quickly hired to rewrite the 19th-century set Big Trouble in Little China, bringing it into the modern age and removing everything from the story except the idea of a Chinese sorcerer seeking immortality. Richter wasn’t very complimentary about the original script, calling it a “dreadful screenplay”, and his rewrite was ready in 10 weeks. Speaking to the L.A Times later, Richter said:

I was asked to do a rewrite… I liked the premise of the original script, but I didn’t like very much else about it. And I felt it would be more accessible if I could change it to the present day. I kept the central conceit, of the subterranean world, and a lot of the original characters, but my version has none of the original dialogue. You can’t take a story set in the gaslight era and put it in the modern era without totally revamping it. Everything looks different and everyone certainly speaks differently.

Despite Richter’s radical overhaul, Goldman and Weinstein nevertheless managed to remain credit as the film’s writers (thanks to a 1986 ruling by the Writers Guild of America), leaving Richter with a rather insulting “adaptation by” credit. This particularly annoyed eventual director John Carpenter, who described the script before Richter’s overhaul as “outrageously unreadable”. 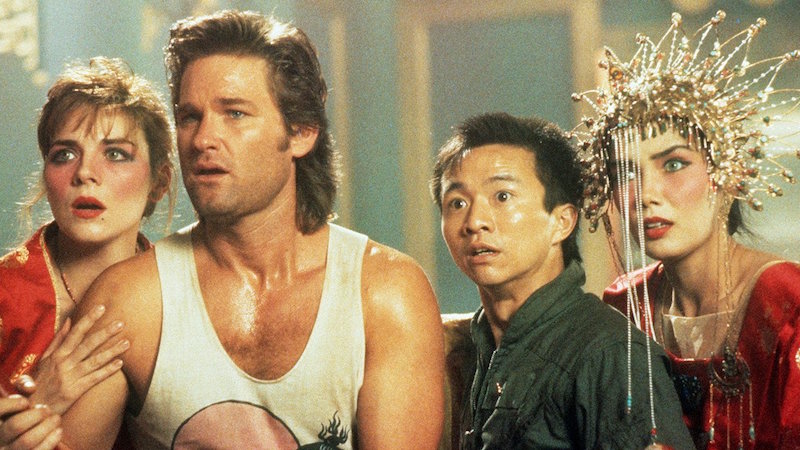 Oh yes, John Carpenter. The legendary horror director made his name on genre successes like Halloween (1978), The Fog (1980), Escape From New York (1981), The Thing (1982), Christine (1983) and Starman (1984)—a frankly mind-boggling work ethic, reaping huge success—Carpenter became involved after being offered the project in the summer of 1985.

20th Century Fox knew that Eddie Murphy’s The Golden Child was being made (originally with Carpenter himself set to direct), and how it contained similar ingredients of oriental mysticism, so they wanted to get Big Trouble in Little China into cinemas before this competitor. Fox suggested hiring Kurt Russell (who’d worked with Carpenter on the TV Movie Elvis and Escape From New York), despite the director initially favouring a bigger star like Clint Eastwood or Jack Nicholson. The fact those screen legends weren’t available kept focus on the up-and-coming Russell, who turned down the lead role in Highlander to do the movie, despite having concerns about the movie’s weird mix of reality and mysticism.

Dennis Dun was cast next as Wang Chi (the ostensible hero, comically treated as a mere sidekick by Russell’s swaggering character), mainly because Carpenter remembered seeing Dun in 1985’s neo-noir Year of the Dragon. Jackie Chan was Carpenter’s first choice, however, but Fox voices concerns about Chan’s grasp of the English language and everyone settled on Dun. As Russell’s love-interest, Gracie Law (a role Carpenter himself beefed up in the script), the studio wanted a female rock star and weren’t happy that Carpenter insisted the little-known Kim Cattrall get the role—as she was an actress notable for appearing in ’80s sex comedy Porky’s. Nevertheless, Carpenter got his way. 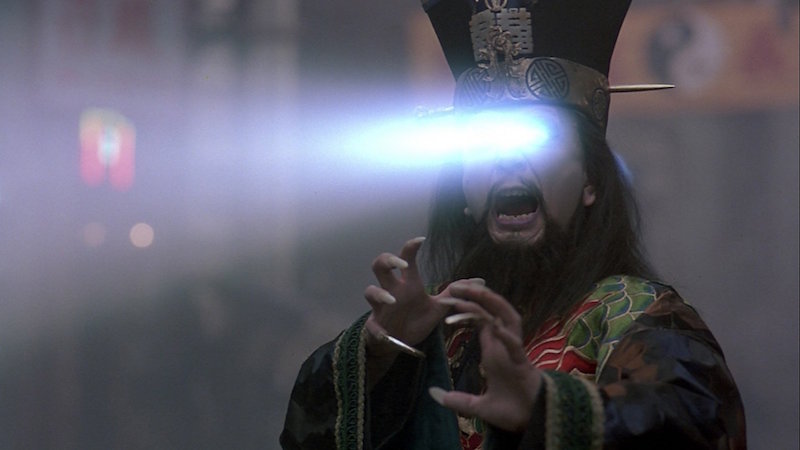 Other character actors involved included Victor Wong (also from Year of the Dragon) as mystic Egg Shen, James Hong (Blade Runner) as sorcerer antagonist David Lo-Pan, and Peter Kwong as one of the supernatural ‘Three Storms’, Rain. Interestingly, all three actors would also appear in The Golden Child that same year.

With casting locked down, the race was on to get Big Trouble in Little China made and beat The Golden Child into theatres. Consequently, Carpenter was given a mere 10 weeks of pre-production in order to get his movie into cinemas five months before the Eddie Murphy film’s planned Christmas release.

Given the difficulty of shooting on location in the real San Francisco, production designer John Lloyd (The Thing) recreated Chinatown using elaborate sets (later recycled for a Janet Jackson music video), which Carpenter filmed on for two months on a slim budget of $25 million. The lack of money for such a big undertaking particularly aggravated Carpenter when it came to the special effects, as he was unhappy with some of the visuals Boss Film Studios managed to create for the movie on an allotted $2 million. The effects house’s head, Richard Edlund, later went on record to say that sum was inadequate for what the script called for. 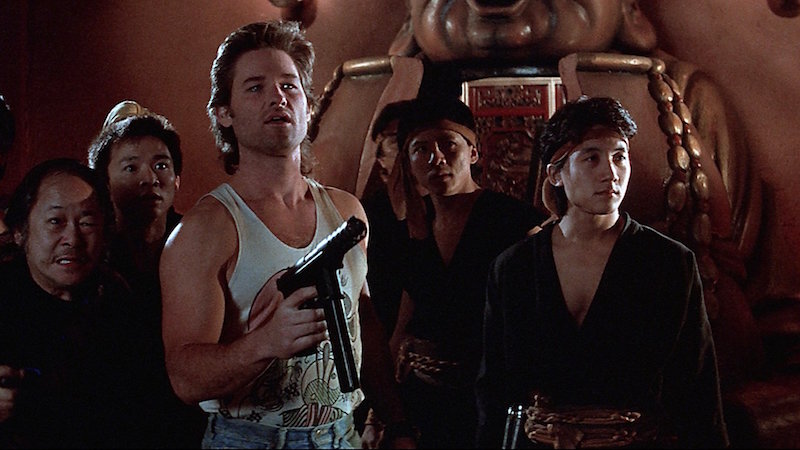 Despite some problems, test screenings were surprisingly positive and everyone expected the film to be a big hit on release. Big Trouble in Little China opened across 1,053 cinemas in the U.S on 2 July 1986. Sadly, it grossed less than half its budget during its time at the box-office, recouping just $11m. Russell and Carpenter have since remarked that the huge success of James Cameron’s Aliens (released 16 days later), Top Gun, and The Karate Kid: Part II possibly contributed to its low takings. A lot of bad reviews didn’t help, either, from critics confused by its east-meets-west tone and style of comedy. Big Trouble in Little China was John Carpenter’s second major flop (The Thing is today considered a classic, but it only made just shy of $20m in 1982). These failures prompted Carpenter to leave the studio system and become a more independent filmmaker—making Prince of Darkness (1987) and They Live (1988) with Alive Films, before his career slid into the doldrums during the ’90s following a string of high-profile disasters like Memoirs of an Invisible Man (1992), Village of the Damned (1995), and the misguided sequel Escape From L.A (1997)

However, there’s ultimately a happy ending for John Carpenter’s mid-’80s misstep. Big Trouble in Little China may not have been a box-office hit in its day, but it found an appreciative audience on home video and enjoyed extensive repeat play on TV deep into the 1990s. The film went on to become a cult favourite (especially with people who are now in their thirties and forties), and has found a new appreciation from modern critics. One of its most memorable villains even inspired the video-game character Raiden from Mortal Kombat. More worryingly, this ’80s curio is being lined up for a remake with Dwayne ‘The Rock’ Johnson in Kurt Russell’s role.

And when was the last time you ever heard anyone talk about The Golden Child, anyway? Give me good ol’ Jack Burton any day…