Famed for its excellent cold opens, Better Call Saul offered up the best one in a long time with the split-screen sequence of Jimmy (Bob Odenkirk) and Kim (Rhea Seehorn) going about their days, beginning with them brushing their teeth together over the same bathroom sink. Set to the strains of “Something Stupid” (as covered by Lola Marsh at music supervisor Thomas Golubic’s behest), this was a delightful sequence that perfectly captured how these two characters are slowly pulling apart.

Kim’s got a distinguished job and is really going places with Mesa Verde and working for Schweikart & Cokely on criminal defence cases, while Jimmy’s re-selling prepaid phones out of a van to scumbags (where his “Saul Goodman” alias comes in handy). It ended on the perfect touch, with Kim and Jimmy in bed together, on opposite sides of the mattress, the split-screen separating them with its black line down the centre of the screen… as Kim’s half switches to black, isolating Jimmy. 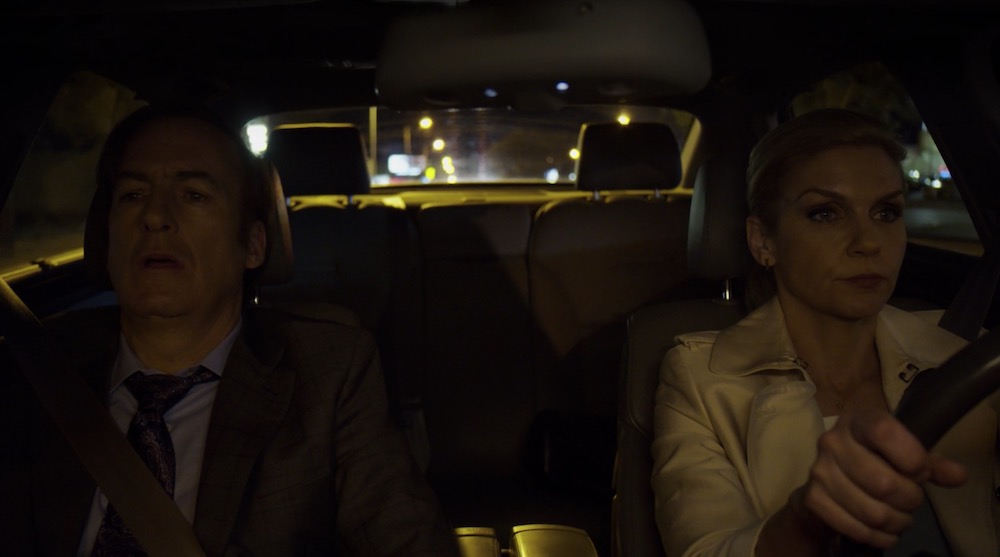 Jimmy’s underachieving was further demonstrated in a scene where he showed associate Huell (Lavell Crawford) around a building he intends to buy with the profits from his phone scam to start a new law firm. But even a dullard like Huell knows the place, while nice, isn’t particularly flashy and doesn’t scream success. Later, Jimmy gets a taste of the “real thing” when accompanies Kim to a reception at Schweikart & Cokely, which is the very definition of sophistication and prestige with its wood panelling and ornate decorations.

Kim’s beautiful office is something to be jealous of, so while Jimmy’s initially happy to schmooze Kim’s workmates and Rick Schweikart (Dennis Boutsikaris) himself, his light-hearted advice about a ski trip for the staff starts to take a mischievous turn when Jimmy’s suggestions become financially prohibitive and draw a crowd around Schweikart, who suddenly feel pressured into realising them. Jimmy and Kim share a near-silent car ride home, framed similarly to the opening split-screen from the perspective of someone looking in through the windscreen. 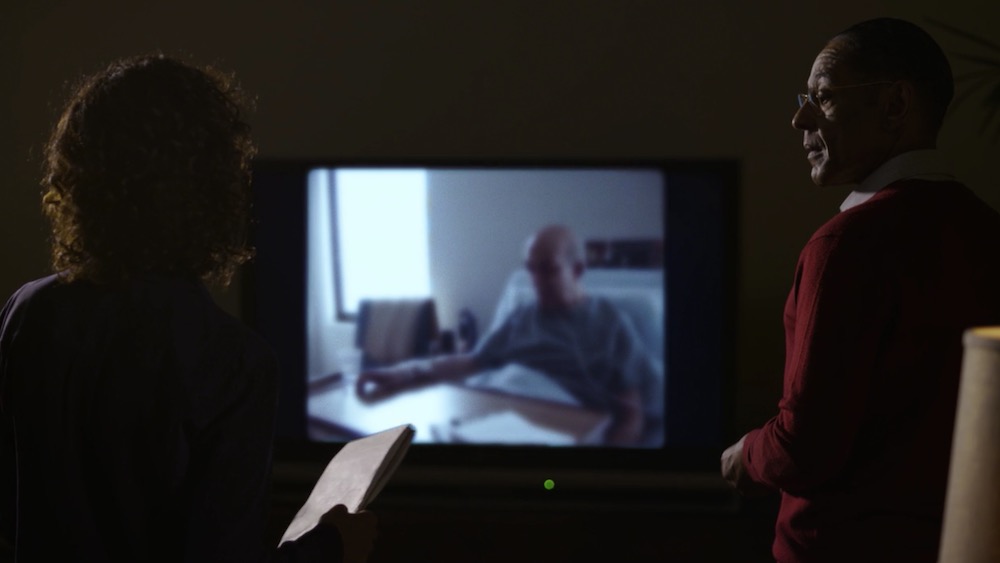 It took me a while to notice “Something Stupid” has jumped ahead in time, by almost a year, but one of the big clues was seeing Hector Salamanca (Mark Margolis) going through rehabilitation after his stroke. Dr Bruckner (Poorna Jagannathan) is very happy with the progress he’s been making over many months, even if he’s largely incapable of doing anything beyond move his right hand, and Gus (Giancarlo Esposito) is having his sessions videotaped so he can monitor his enemy’s progress.

Bruckner is unaware Gus’s benevolence is nothing of the sort, so slightly perturbed when he advises they temper Hector’s further treatment. Gus seemed to be particularly annoyed when he noticed how Hector’s “muscle spasm” that spilt a cup of water was likely intentional, as it meant he could ogle a nurse who took care of the mess. I’m a little confused Hector’s own people haven’t taken care of him, but assume nobody’s aware Gus is the one who’s paying for his treatment with Dr Bruckner. But it still seems a little odd to me, that Hector’s sworn enemy and business rival has managed to gain complete control over his health and wellbeing.

Of course, as fans of Breaking Bad will know, in Gus allowing Hector to at least regain control of his right hand, he’s sealed his own fate in the process… and that’s a wonderful little bit of poetic justice. As a prequel TV series, Better Call Saul knows how to ensure its backstory improves and provides delicious context to events we’ve already seen. 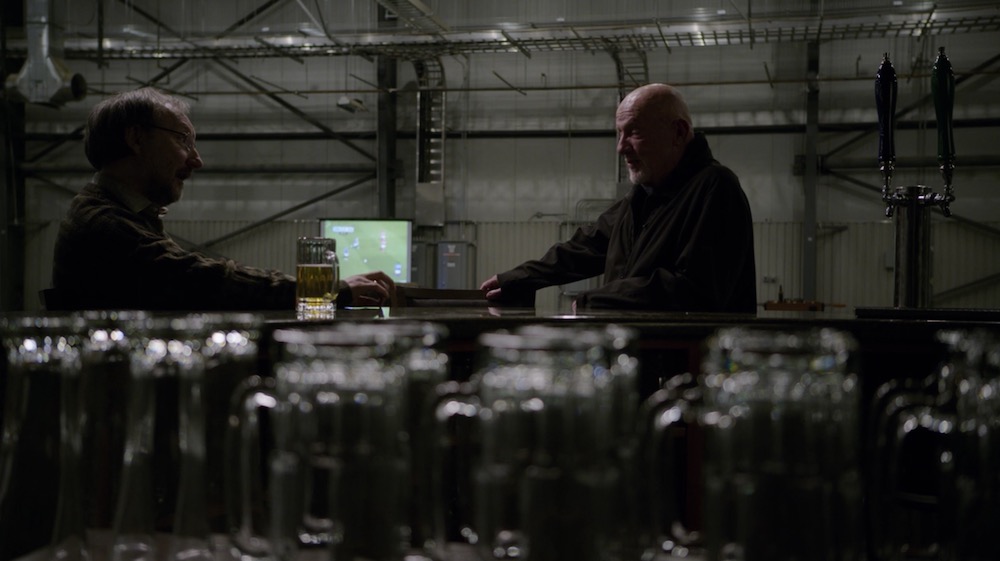 Another clue the show has jumped ahead in time was the extent of the work that’s gone into the Superlab. Werner (Rainer Bock) has been making progress, but his team of German engineers, who are transported in secrecy to the dig site from their warehouse each day, are growing restless and making mistakes. Casper (Stefan Kapičić) accidentally knocks down a supporting column with a bulldozer, setting back the work even more, and tempers are getting frayed.

Werner explains the obvious to Michael (love it that he addresses Mike so formally), that his men are missing home and need a change of scenery. You can’t keep them cooped up in the routine for much longer, and while Mike is particularly keen to have the disruptive Kai (Ben Bela Böhm) sent home, he agrees that the team need some R&R before they come apart at the seams. I just wonder if giving them a break is going to lead to some unforeseen problem arising, but some of the drama is negated by the fact we know the Superlab does get completed because it was a key part of Breaking Bad. 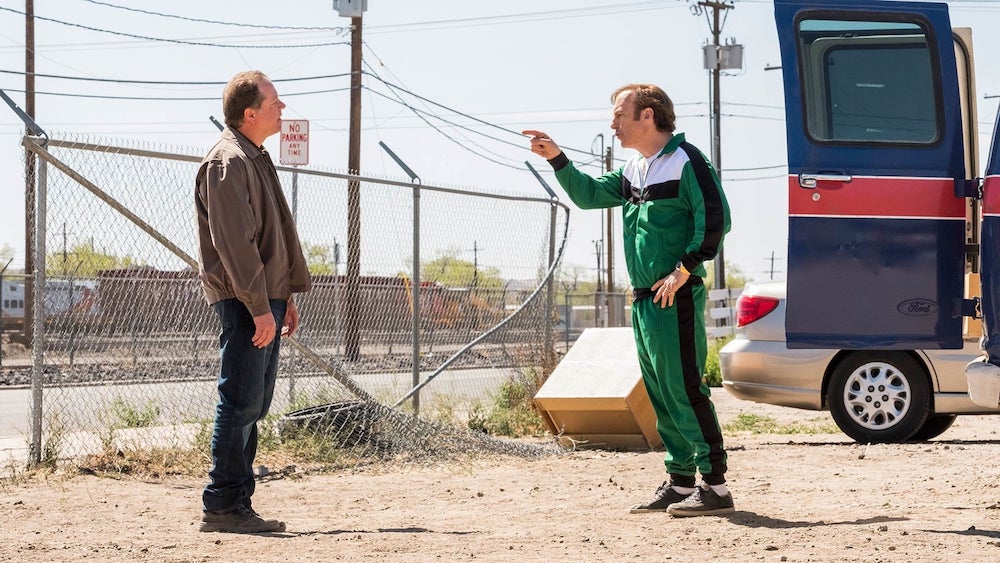 The title, “Something Stupid”, referred to the opening song, but also had relevance with Casper’s workplace accident, and something Huell does he’ll come to regret. While out selling his phones, Jimmy’s approached by an off-duty cop in plain clothes, who wants him to stop selling phones that criminals use to buy drugs from inside prison. A polite enough argument ensues, but Huell reads the situation wrong because he’s wearing headphones and can’t hear what’s going on, so clubs the cop over the head with a bag of shopping. So, Huell was arrested and, because Jimmy’s still a month away from being reinstated as a lawyer, Kim agrees to represent Huell and try to keep him out of jail. But she can’t get the prosecutor to agree that a prison sentence is too harsh in Huell’s case, and his criminal record means that’s not very likely anyway, so it seems Huell is going to have to do some time inside.

Interesting to see Kim rankle over Jimmy being described as a “scumbag disbarred lawyer who peddles drop phones to criminals” – her expression somewhat embarrassed and shocked others see her boyfriend that way. Maybe she’s beginning to see he’s not the best plus-one for her, now her career’s on the up.

But even more intriguing is what Kim’s plan is to keep Huell a free man. She stops off to buy a lot of office supplies, then calls Jimmy with a better idea over how to handle the situation, and we’ll have to wait for next week’s episode to see what that might be. I was wondering if Huell’s fate was sealed here, because losing him for a few years would be a useful way to explain why he appears on Breaking Bad looking considerably larger. Lavell Crawford lost a lot of weight after Breaking Bad finished, so his appearance in this prequel has always present something of a problem. It would be easy to accept Huell simply puts on a lot of weight while in jail, but whether or not the show is going to take that opportunity remains to be seen. 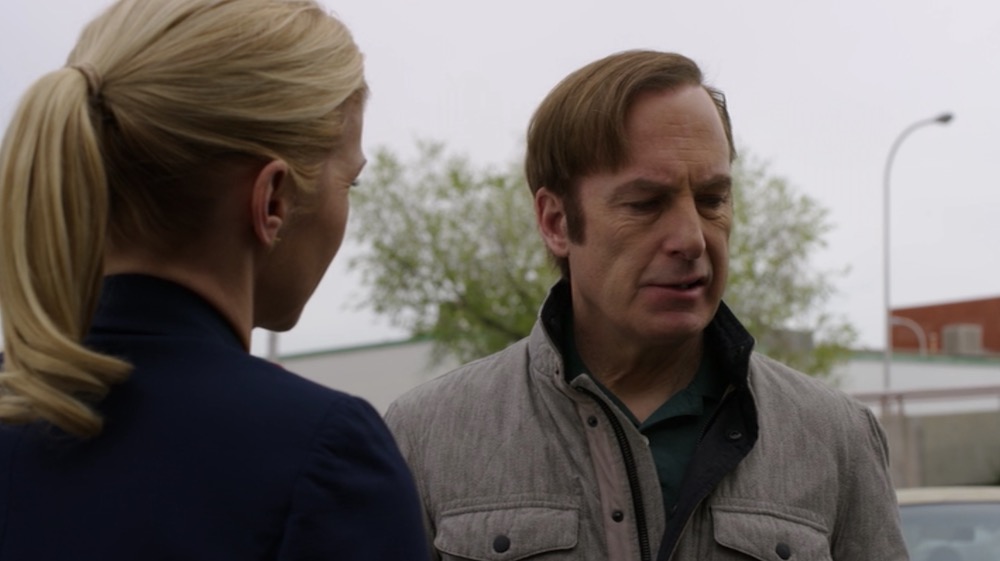