We’ve been getting more flashbacks than usual this season, although I’m not sure all of them are particularly revelatory. “Piñata” opened with a scene a decade before the show began, with Jimmy (Bob Odenkirk) in his mailroom position at HHM, with Kim (Rhea Seehorn) just a lowly intern for his brother Chuck’s (Michael McKean) mighty law firm. It was definitely a nice way to see McKean again, whose absence as Chuck been felt this year, now the show has gained an (intentional) hole in Jimmy’s narrative. 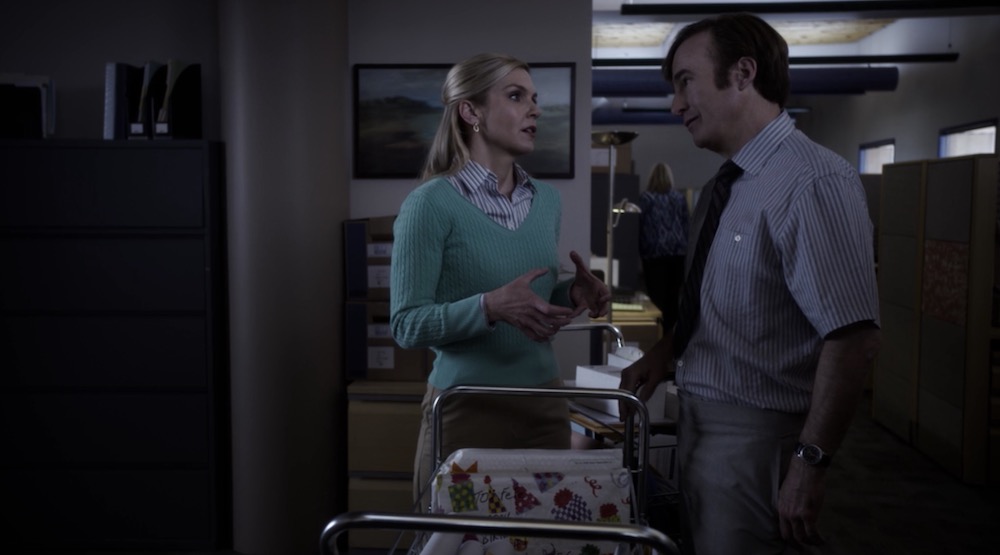 This teaser served to give us a look at how things used to be for Jimmy, pushed to the kerb by his brother, who in this scene was being congratulated by closing a case simply by using the written law. Meanwhile, Jimmy is collecting trivial ballots about everyone’s Oscar night predictions, so he takes a detour into HHM’s library, which appears to have been his first step to becoming a lawyer behind Chuck’s back. This wasn’t anything we didn’t know happened, but it was designed to show how Kim dreamed of becoming a lawyer for noble reasons, whereas Jimmy always saw it as a means to an end – to get out of the mailroom, but also upset his big-headed elder brother… 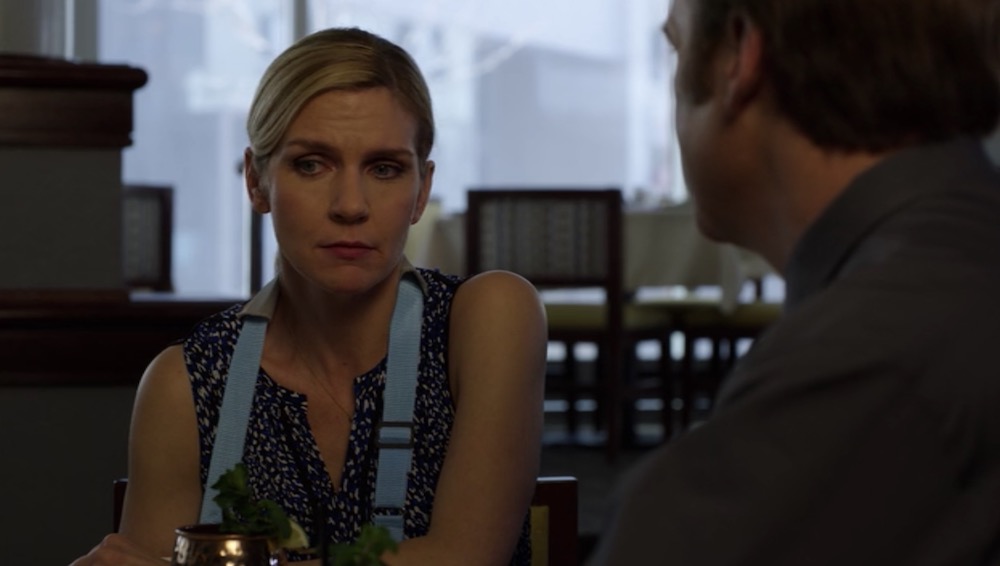 Back in the present, and Kim’s now an up-and-coming lawyer with a big client in Mesa Verde, but giving a big bank her undivided attention is starting to feel like a monotonous strain. She tries to review her client’s records, but can’t help peeking into the intriguing cases from her short time as a public defender. Her problem was underlined in “Piñata”, that she finds “lowly” pro bono cases more interesting than doing backbreaking donkey work for a faceless corporation, no matter how prestigious the gig. And even after noticing Jimmy’s doodles about a prospective relaunch of ‘Wexler & McGill’ when he’s practising law again, Kim ultimately grasped the nettle and decided to do something to settle her conflicted mind.

So, Kim went to meet with Rick Schwikart (Dennis Boutsikaris) at his fancy law firm, suggesting he open a banking division within it, later revealing to Jimmy she’s been offered a partner position at Schwikart & Cokely to start their banking law division. This will allow her to keep the Mesa Verde account, but also work on public defendant cases. Win-win! Unfortunately, the only loser is Jimmy – whose dreams of going back into law with Kim by his side has been dealt a crushing blow. And it’s another nudge down the solo criminal path we know he’s on…

For a change, Jimmy shouldered the bulk of this week’s story and it was full of good material for his character; echoing his past while “warning” of his future. Firstly, there was a touching phone call from a relative of Mrs Strauss, the old lady Jimmy helped in the retirement home back in season 1 with the Sandpiper class action. Mrs Strauss has now died, and in some ways a door to the last decent Jimmy did with his legal skills has closed. 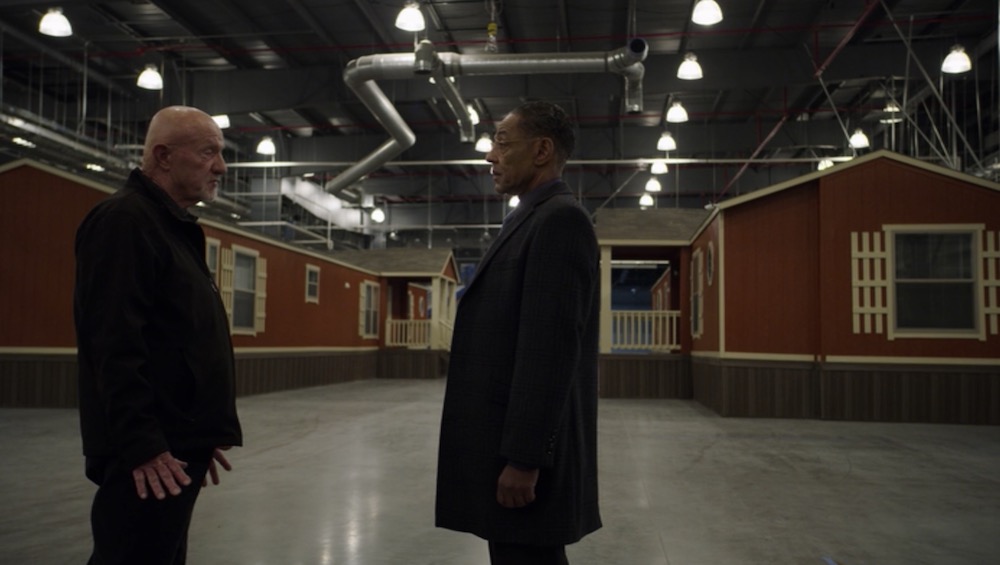 It seems we’re really going to be putting a lot of attention on how Gus Fring’s (Giancarlo Esposito) “superlab” was constructed, as this episode spent a fair amount of time explaining the logistics of how a world-class laboratory for the criminal production of illegal drugs is created in utmost secrecy. Werner Ziegler (Rainer Bock) won the contract last week after his cloak and dagger “interview”, but here we saw Mike (Jonathan Banks) prepare the ground for Ziegler’s whole operation. And that, obviously, involves providing for the German engineers who’ll actually spend 6–10 months building the superlab in secret.

Truthfully, I never considered the difficulty of organising something like this in secret! Mike’s installed two static homes inside a large warehouse (which we later discover is situated somewhere remote) and has it equipped with an open bar, basketball court, La-Z-Boy recliners, movie screen, and pool and foosball tables. Mike seems to have thought of everything, ensuring nobody can come or go without being seen on CCTV, and presumably the small workforce will be transported in secret to the laundromat to construct the lab each day. It’s quite an operation! But Mike already senses a troublemaker in their midst: Kai (Ben Bela Böhm), a German with a bad attitude who’s probably going to become a “casualty” of Mike or Gus’s hospitality very soon. But he at least seems to have made peace with daughter-in-law Stacey (Kerry Condon), after his behaviour at their grief counselling session. 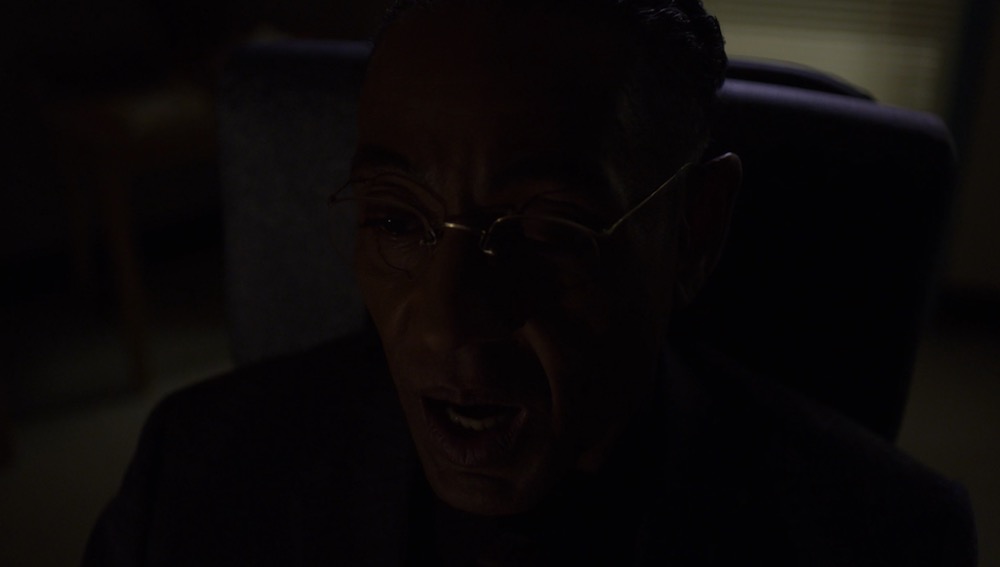 The root of the matter.

Gus had a short scene with Mike in the warehouse before the German arrived, but his involvement in this episode was more focused on underlining his acrimonious relationship with rival Don Hector (Mark Margolis). Again, there wasn’t really much here we didn’t already know, because we know what the situation with Hector will become thanks to Breaking Bad, but it was a great showcase for Giancarlo Esposito and provided further backstory for Gus.

Here, he sat in the dark next to Hector’s hospital bed, regaling him with a childhood story about how he nurtured a lucuma tree to health when his impoverished Chilean family were starving, then eventually caught a wild coati that had been snacking on the fruit. But rather than kill it, seven-year-old Gus decided to keep it under his control until it died. This is, of course, an obvious analogy for what control freak Gus is doing with Hector right now, but Esposito sold the on-the-nose monologue very well. 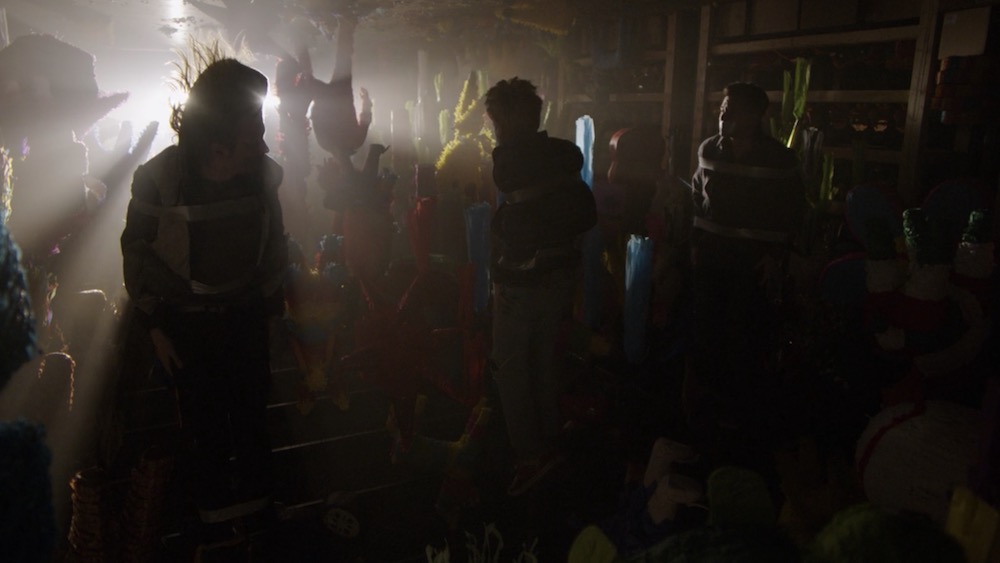 After seeing insomniac Howard (Patrick Fabian) looking frazzled last week, Jimmy learned of the true extent of his old boss’s misery. HHM is going through a crisis because of its tarnished reputation (not helped by the loss of Chuck), and Howard’s having to “rightsize” his workforce to keep things afloat. A fun parallel that straight-shooting Howard’s business is on the way down, just as dodgy Gus’s is on the rise.

It was interesting that Jimmy’s reaction to Howard’s bad luck wasn’t entirely hateful, too. He doesn’t despise Howard, and perhaps has affection for HHM – or at least the people that work there. The firm meant a lot to his brother and it’s where this latest chapter of his life began, so he gave Howard some tough love advice to get a rise out of him, then asked him to channel his aggression into getting HHM back on its feet. Who knows if it’ll work, but I have my doubts.

Anyway, Jimmy was there to get his inheritance money from Chuck, which he uses to bulk buy PAYG mobile phones from work, intending to re-sell them for a profit across town again. I thought this plan had been nixed after Jimmy was mugged by three teenagers for his trouble, but this time he offered them a $100 per night cut of his takings if they leave him alone. Unwisely, they don’t see sense and chase Jimmy into a corner, only to realise they’ve been led into a trap. So the teens find themselves strung upside down in a garage full of dangling piñatas (yes, the titles always make sense eventually!), about to be bludgeoned by baseball bats brandished by a masked Huell (Lavell Crawford) and ‘Man Mountain’ (David Mattey). Jimmy’s fear tactics do the job, as the kids are frightened stiff and agree he’s off-limits to them and all their friends while he sells his phones.

This was possibly the most “gangster” thing Jimmy’s done so far on the show (echoes of Bob Hoskins in The Long Good Friday perhaps?), and easily the strongest sign yet that Jimmy’s becoming ‘Saul Goodman’. With Chuck dead, HHM dying, and Kim moving in different circles, there are fewer things tethering Jimmy to the straight and narrow way of making a living. Even at the phone shop, he seems to have enough time to dash off and do questionable things for a quick buck.