Eyes of Laura Mars began life as an 11-page treatment by John Carpenter, who then expanded his initial draft into a screenplay for indie producer Jack Harris, the B Movie legend behind The Blob (1958) who produced Carpenter’s cult classic Dark Star (1974). The project was initially set to be Carpenter’s second movie, with grindhouse favourite Roberta Collins cast in the lead. What a very different film that would have been!

Things changed when another producer, John Peters, got involved and brought along funding from Columbia Pictures. The studio executives insisted on a script rewrite and hired Logan’s Run (1976) writer David Zelag Goodman for the job. They also pushed Carpenter out of the picture, who moved onto making Assault on Precinct 13 (1976), and replaced him with veteran Irvin Kershner, whom they thought would be more reliable (or controllable?) as he was already 25 years into his career. 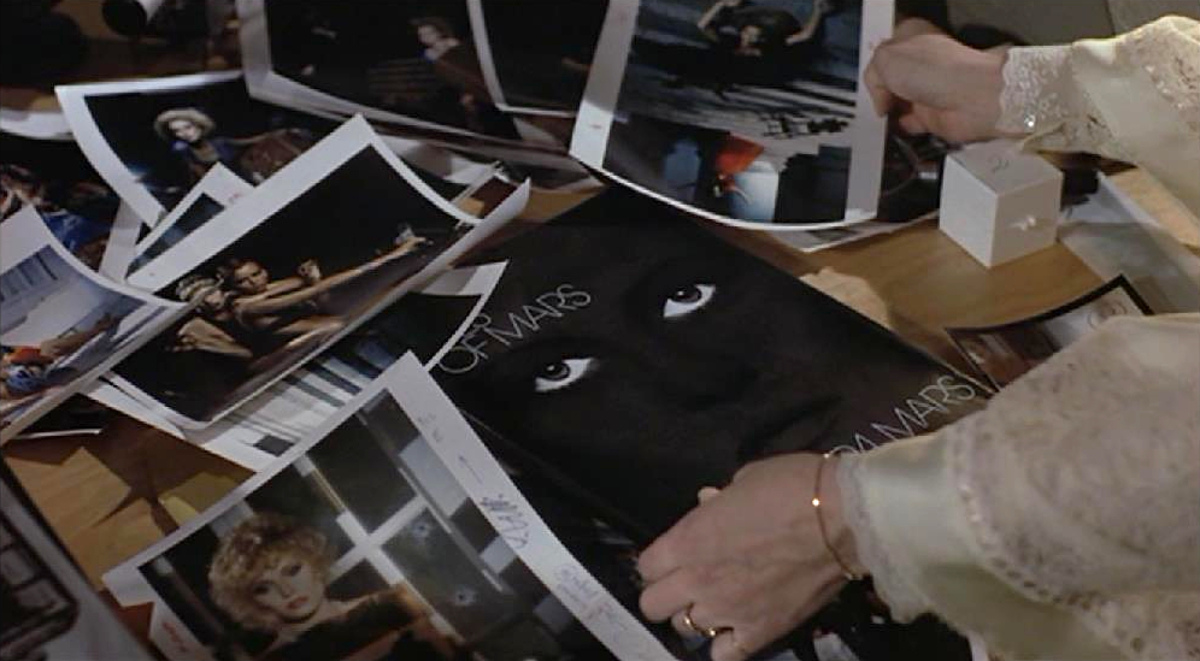 Barbara Streisand (who was dating John Peters at the time) was first choice for the new lead. She was initially interested, if only to add some variety to her growing list of movie appearances, but was uncomfortable with the script’s risqué content and eventually pulled out, contenting herself with contributing vocals for the song, “Prisoner”, sung over the end credits.

The risqué material that worried Streisand was actually pivotal to the plot: Laura Mars is a world-famous fashion photographer whose glossy portrayal of sex and violence is blamed for inspiring a serial killer who pierces the eyes of his victims. Each victim also has a connection to Mars herself, who also somehow sees the brutal murders as they happen, as if through the eyes of the perpetrator. There’s also an implication that her involuntary voyeurism is somehow a motivation for the killer. It’s a vague metaphor for passive audiences demanding such imagery, thus driving the creation of violent films. The age-old debate of whether violence in art reflects or shapes society is touched upon throughout, sometimes heavy-handedly. 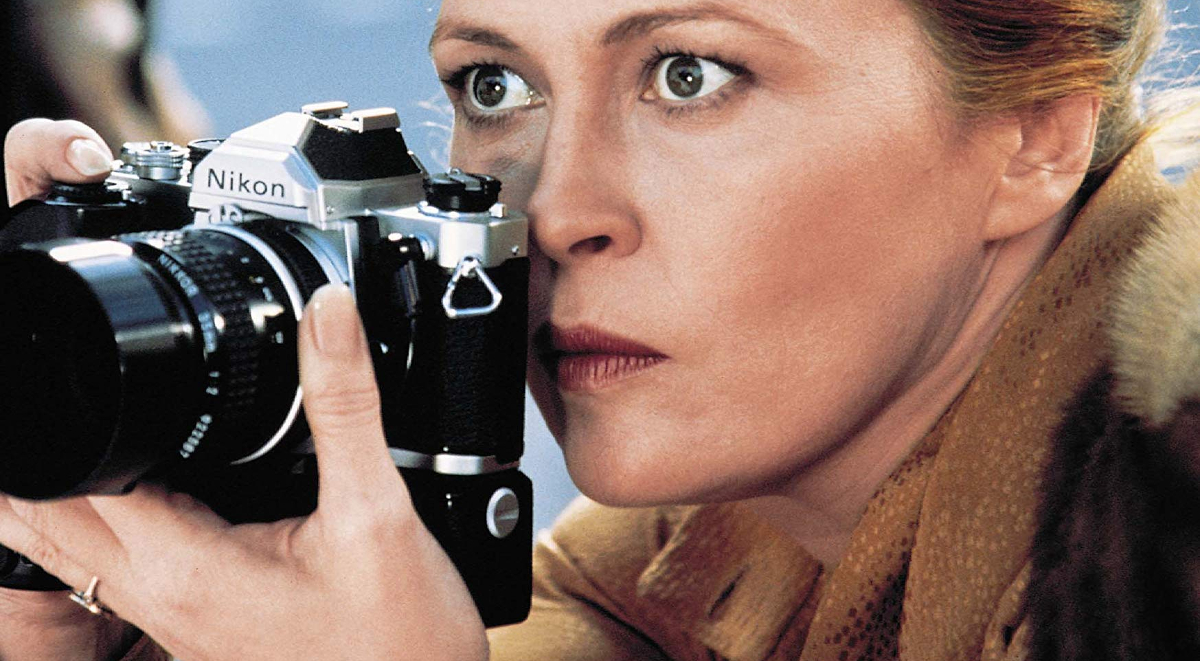 The style, theme, and format of Eyes of Laura Mars is often likened to an ‘American giallo‘, and often dismissed as being a tardy cash-in on an Italian cinema fashion that had become passé by the mid-1970s. This is an unfair criticism. In many ways, Eyes of Laura Mars was a homecoming for the giallo, which had been prefigured as early as 1841 in US literature by Edgar Allen Poe’s story The Murders in the Rue Morgue, and then in US cinema with Screaming Mimi (1958), but most famously with Alfred Hitchcock’s Psycho (1960). It’s no accident that Mario Bava—the ‘father of the giallo’—titled his formative thriller The Girl Who Knew Too Much (1963) as a reference to Hitchcock.

The best thing about Eyes of Laura Mars is that it provides an example of near-perfect ’70s casting, with a wonderful cross-section of up-and-coming Hollywood talent. This is perhaps the most appealing aspect for today’s audience and, along with its gritty New York locations, is sure to give older viewers a kick of nostalgia… 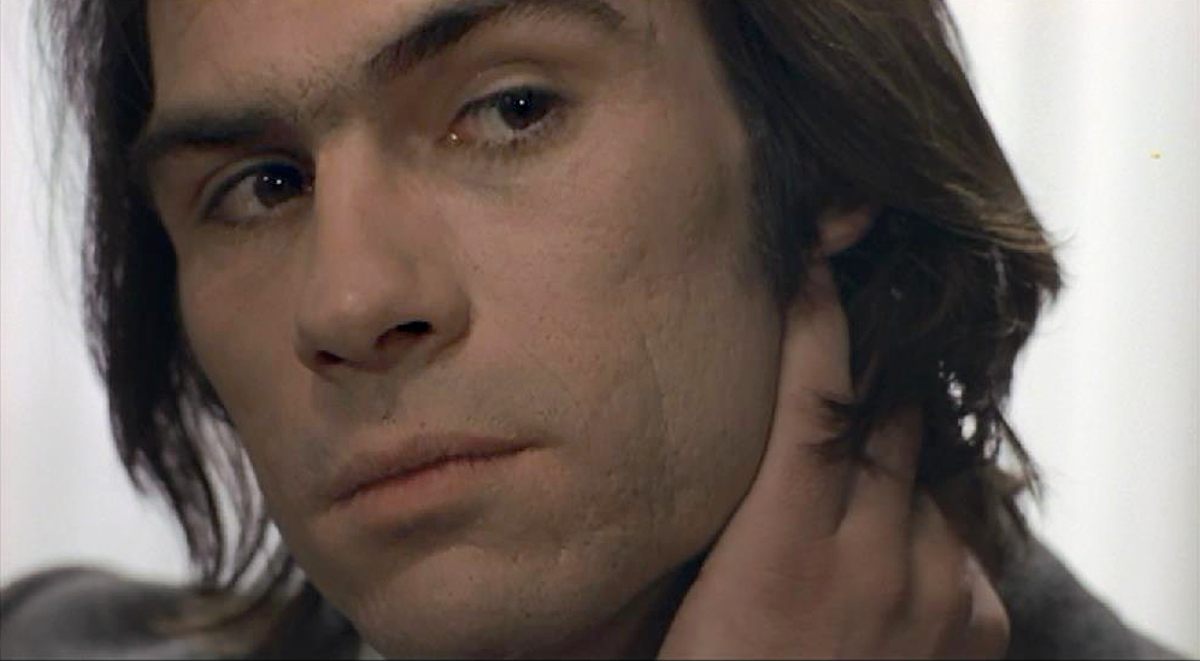 Faye Dunaway was at the height of her power here, giving a performance that’s in turns cold and domineering, then suddenly very vulnerable. But is her character simply manipulating those around her? She most definitely knows how to put those eyes to work! Not to mention her long legs—as Dunaway’s known for having a clause written into her contracts to specify a minimum screen time for them!

She made a big splash with her first lead role, Bonnie Parker in Bonnie and Clyde (1967), for which she was nominated for the ‘Best Actress’ Oscar and won the BAFTA for ‘Most Promising Newcomer to Leading Film Roles’. 10 years later, after a string of varied parts, including The Thomas Crown Affair (1968), Chinatown (1975), and Three Days of the Condor (1975), Dunaway eventually won her ‘Best Actress’ Oscar for Network (1977). After Laura Mars, I don’t think the actress ever reached that level again… until, perhaps, when she played Wanda in the Bukowski biopic Barfly (1987). 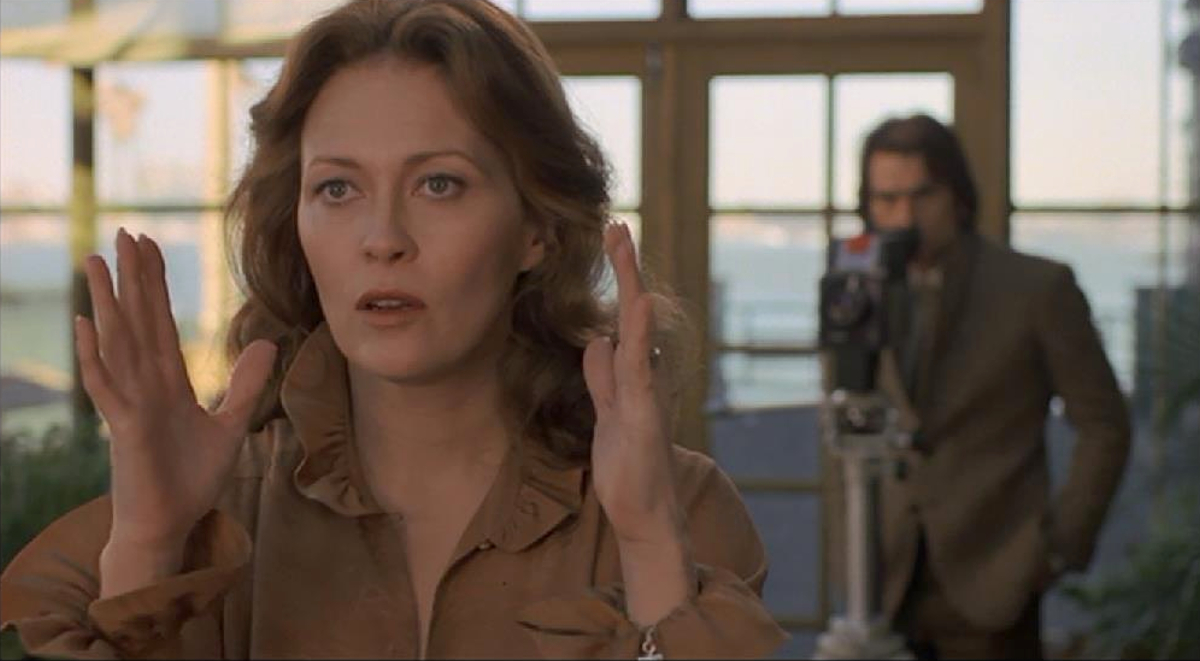 There’s also an early leading role for Tommy Lee Jones, whose face is so malleable he can change his demeanour from scarily intense to boyishly attractive with a mere tilt of the head. It has something to do with him understanding where the camera is, plus the interplay of his rugged ridges and striking eyebrows. Perhaps he should have had a special clause for those in his contract! The personality swings of his police detective, John Neville, from cool command presence to humane sensitivity, reminded me a little of his portrayal of Gary Gilmore in The Executioner’s Song (1982), which won him an Emmy.

Of the top-notch supporting cast, Brad Dourif is probably the most impressive. He’s still best known for his portrayal of Billy Bibbit, the vulnerable patient whose suicide is the catalyst for the escape attempt in One Flew Over the Cuckoo’s Nest (1975). This was an astonishing performance for which he won a Golden Globe for ‘Best Debut’ and a BAFTA for ‘Best Supporting Actor’, as well as a deserved Oscar nomination. He’s always interesting to watch on screen, and Tommy Ludlow, his ex-con trying to go straight in Laura Mars, is no exception. The role isn’t a far cry from Bibbit, having a similar vulnerability, again played with superb subtleties that belie an inner turmoil you know will come to a head. 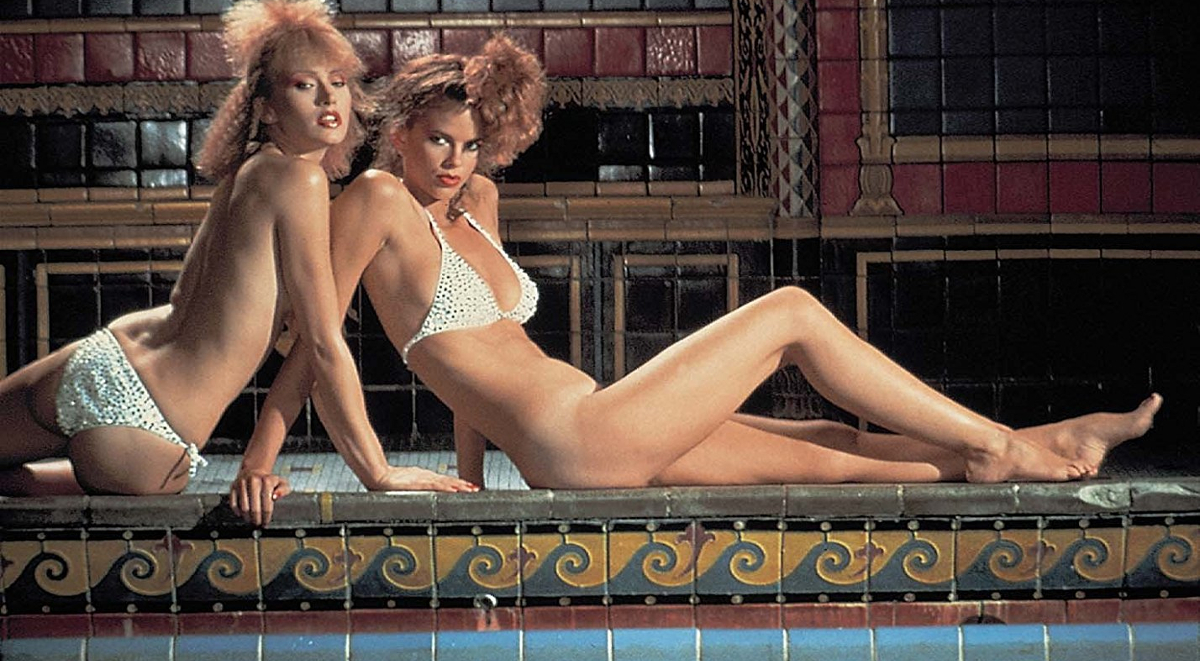 Laura’s lecherous lothario ex-husband, Michael, was a breakthrough for Puerto Rican actor Raúl Juliá. Apart from a handful of minor movie roles he’d been a struggling TV actor since the 1950s. Here he’s unlikable, unbalanced, immature and just another in the string of prime suspects from the life of Laura Mars.

Another underrated actor with a lengthy TV resume is Rene Auberjonois (later of Star Trek: Deep Space Nine fame), who plays Donald Phelps. It’s not quite clear what his role in Laura Mars’s creative team is, exactly, but it’s something like the manager or art director for her cinematic photoshoots. He relishes the stereotypical New York ‘70s art-scene campiness and plays the part with zeal. 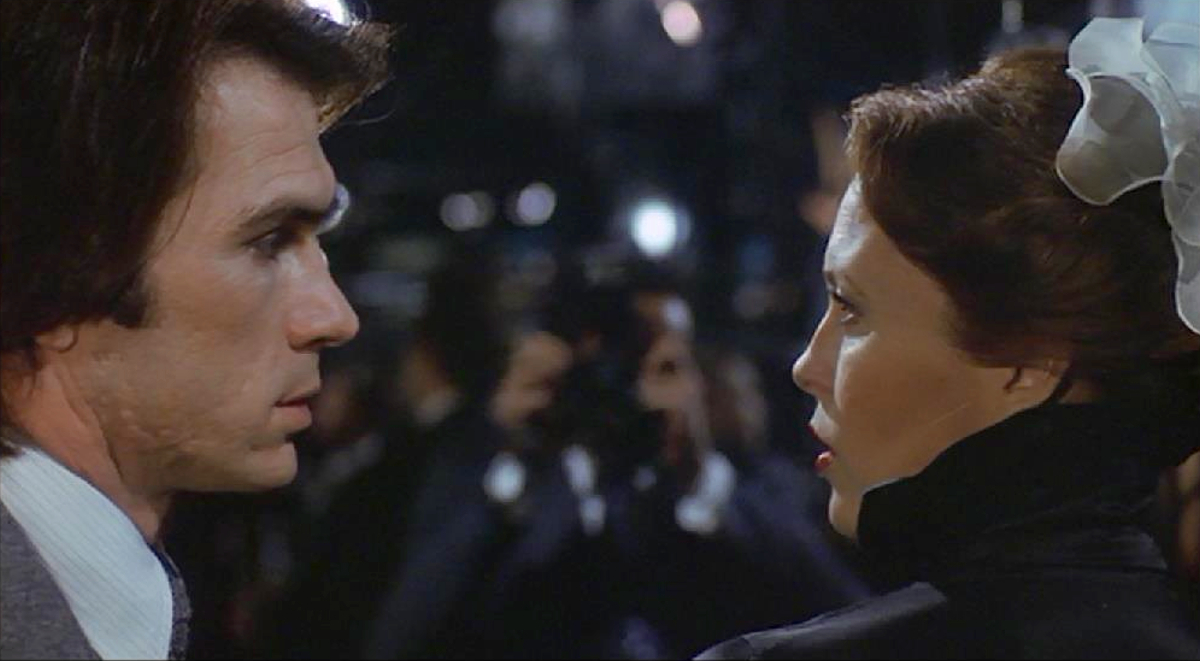 It seems every character is delightfully off-kilter in some way. They’re all potentially unhinged and could be the killer… including Laura herself, if only indirectly. In fine giallo tradition, we’re told quite clearly who the killer is about half-way through, but you’ll need to be paying close attention to catch on.

Although sometimes hinted-at, a true giallo avoids supernatural solutions. Part of the fun is the assurance that however weird the events may seem, there will be a rational—albeit contrived—explanation. Like one of the murders being faked, or the involvement of an identical twin. That’s the main thing that sets Laura Mars apart from the genre. The plot revolves around the idea that Laura can see the murders through the eyes of the killer. There is also some debate whether she is somehow directly controlling or influencing the killer—a kind of tele(psycho)pathic remote control. 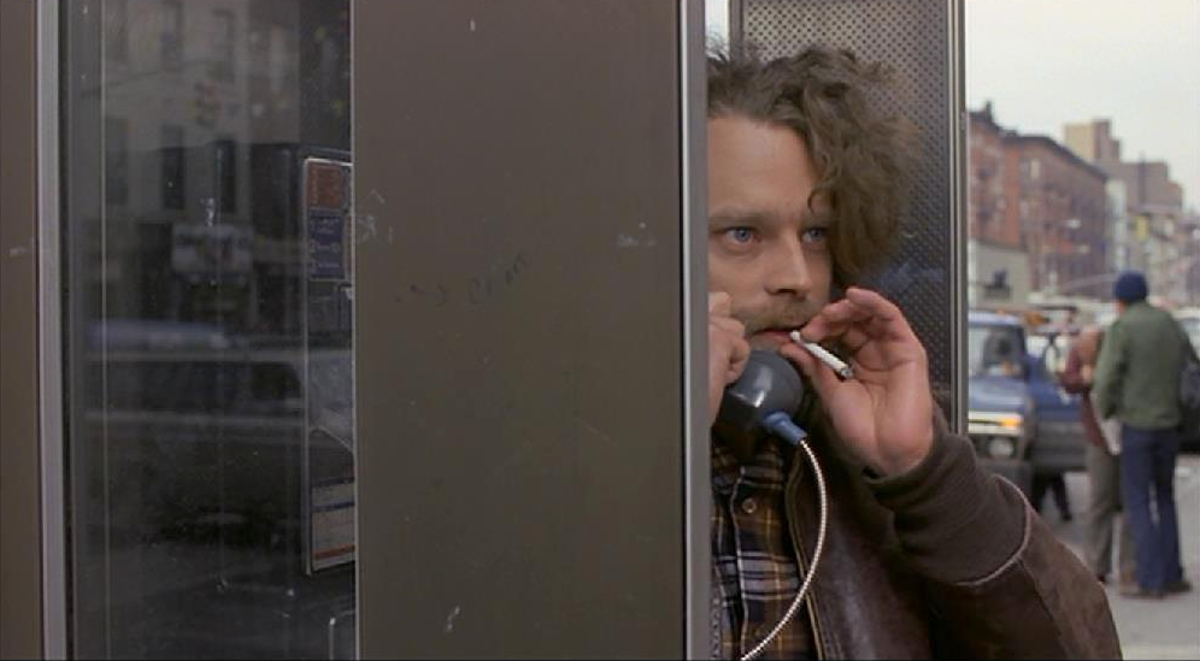 Having said that, one could argue that some of the definitive gialli of Dario Argento don’t strictly adhere to this rule. Is the idea of a psychic link with a killer any more far-fetched than taking an image from the chemical imprint in the retina of a corpse, which is the crux of his Four Flies on Grey Velvet (1971)?

The elaborate set-ups for Laura Mars’s fashion shoots, involving burning cars, murders, and semi-naked models, are inspired by the controversial work of Helmut Newton, and feature a few of his favourite real-life models. It is mainly his imagery we see in the books and exhibitions throughout the film. These are the closest thing to the expected set-pieces that usually pep-up a giallo. But the murders, which more usually fulfil this role, are shot with far less finesse: simply a handheld POV camera with some Vaseline on the lens. The only time this is truly effective is the climax when Laura watches through the killer’s eyes as they’re finally coming for her! 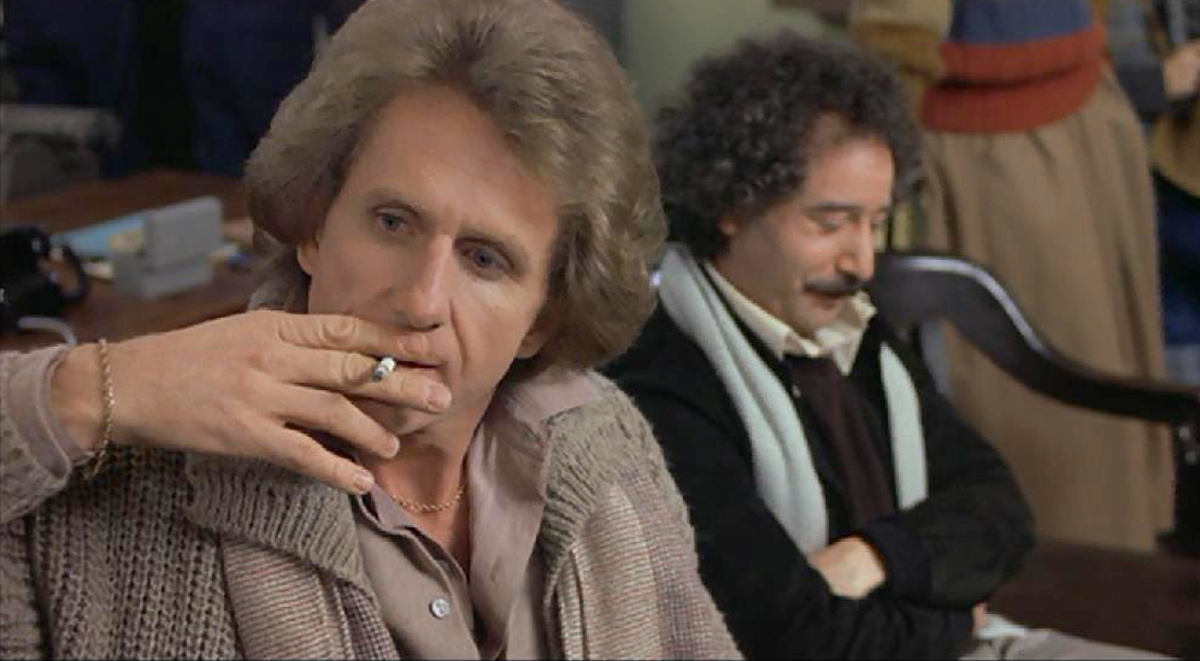 This is the film that impressed George Lucas and resulted in him hiring Irvin Kershner to direct The Empire Strikes Back (1980). Kershner’s clearly a capable director and comfortable here, but perhaps that’s the problem? The photoshoot sequences and the stylish sets for Laura Mars’ apartment mesh well with the sleek giallo ethos, but what makes gialli so much fun is their exuberance and, dare I say it, cheesiness to counterbalance any of their arty indulgences. Eyes of Laura Mars lacks that sense of fun, as well as the startlingly inventive camerawork expected of the genre. Perhaps this can be blamed on Hollywood itself, where producers demand so many redrafts and rewrites, and directors are chosen by producers, rather than being heavily involved in developing a project from the outset?

Eyes of Laura Mars met with a lukewarm critical reception, but did well at the box office, quickly converting a budget of less than $10M into earnings of $20M or more. It remains a fine thriller and an absorbing viewing experience but, although it has earned some cult respect, I can’t help think how much better it might have been had John Carpenter remained in control…