There’s widening a disparity at the heart of Better Call Saul, as the storylines focusing on its star, Jimmy McGill (Bob Odenkirk), are often much smaller in scale than whatever Mike (Jonathan Banks) and Gus (Giancarlo Esposito) are up to. And now the show’s lost Jimmy’s brother Chuck, who made for a great foil and could tip the drama in Jimmy’s favour, “Something Beautiful” made me worry this season doesn’t quite know how to replace the gaping hole in Jimmy’s life, and storyline… 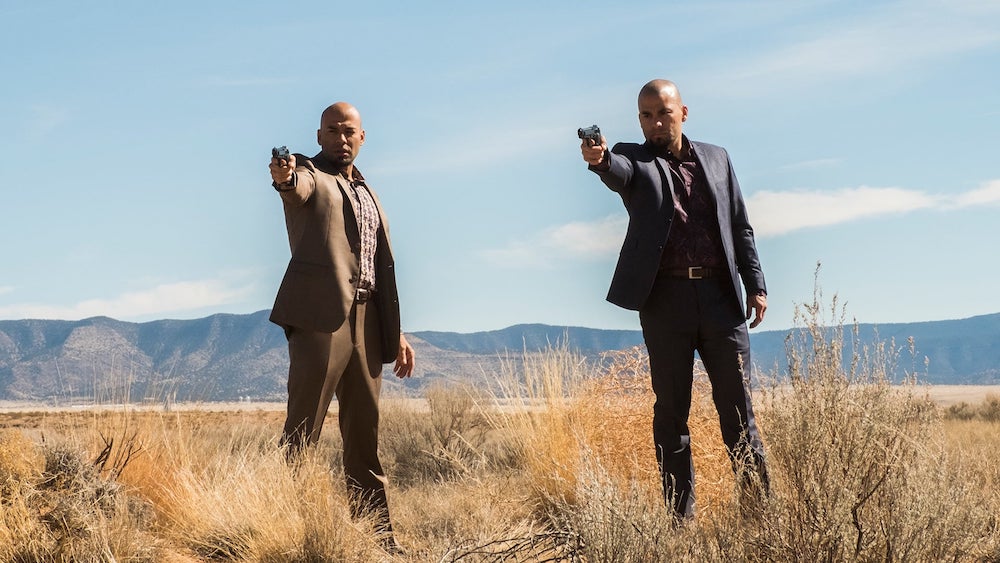 Like Breaking Bad before it, Better Call Saul really knows how to open an episode. Here, there was a six-minute cold open with barely any dialogue. I also love how ambiguously scenes begin, hooking you with some weird visual and letting you try to work out what’s going on. We opened on a car intentionally blowing its own tyres out with a stinger places across a desert road, rolling to a standstill on the roadside. Then another car followed in its wake, sprinkling glass and debris onto the asphalt. What on earth is going on? And why is Nacho (Michael Mando) a passenger in the second car, helping Gus’s henchmen Victor (Jeremiah Bitsui) and Tyrus (Ray Campbell)?

It became clear once they put Arturo’s pale corpse into the car with the blown out tyres, of course, then riddled the car with bullets. Having suffocated Arturo to frighten Nacho into being his ‘inside man’ with the Salamanca family, Gus needed to stage a cover story. And his deception goes as far as having Nacho himself shot, twice, non-fatally, a short distance from Arturo’s “attacked” vehicle. Nacho was left to call for help from the Cousins (Daniel and Luis Moncada), who eventually arrive to find him close to death, prompting them to get local veterinarian Caldera (Joe DeRosa) to patch him up. But now the dangerous Mexican cartel are in town and people are getting shot, it’s the last time Caldera’s going to come to Nacho’s aide.

Better Call Saul continues to have two sides to its character. Nacho’s storyline was certainly for those who want a “Breaking Bad Prequel” more than a “Saul Goodman Origin Story”. Luckily, both are fine by me. I appreciate how Nacho’s become a sympathetic character over four seasons, too, now he’s in a similar predicament to Walter White: under the heel of Gus Fring, with seemingly no way to wriggle out, because whatever move he makes is going to upset either his boss or his blackmailer. But to make matters worse, he’s not indispensable.

Almost here as comic relief in-between Nacho’s life-and-death ordeal, Jimmy’s plan with the Hummel figurines gained clarity this week. He wants Mike to help him swap a worthless version for the rare “Bavarian Boy” version on display in Neff Copiers, which is an easy job that only requires breaking through a standard door lock. There’s not even an intruder alarm. Mike wants nothing to do with it, however, possibly because splitting a couple grand 50/50 doesn’t mean much to someone on Madrigal’s payroll.

It’s not for me. And I don’t think it should be for you either.—Mike.

Instead, Saul was forced to enlist the help of a burglar called Ira (Franc Ross), thanks to his other underworld contact, the vet Caldera. A minor but recurring character who neatly linked the two tonally different halves of this episode. Ira was also someone we’ve seen before, as he’s the owner of Vamonos Pest Control from season 5 of Breaking Bad. I love how this show has built its own Simpsons-style tapestry of odd townsfolk.

The ensuing burglary was amusing and treated almost like a comedy sketch, with Ira breaking into the office to switch the figurines, only to discover than Mr. Neff (Andrew Friedman) is sleeping there because his wife’s kicked him out of the house. Bad timing! Jimmy’s assistance was soon required, forcing him to distract Neff and get him out of his office by setting his car alarm off, allowing Ira to sneak out. All quite fun, but also trivial. I’m not sure if, or how, this might build into something with bigger stakes… but season 4’s certainly exhibiting an imbalance of drama. I don’t think too many viewers can’t wait for next week’s episode to see what happens with the Bavarian Boy, when elsewhere there’s menacing drug lords and staged shootouts. 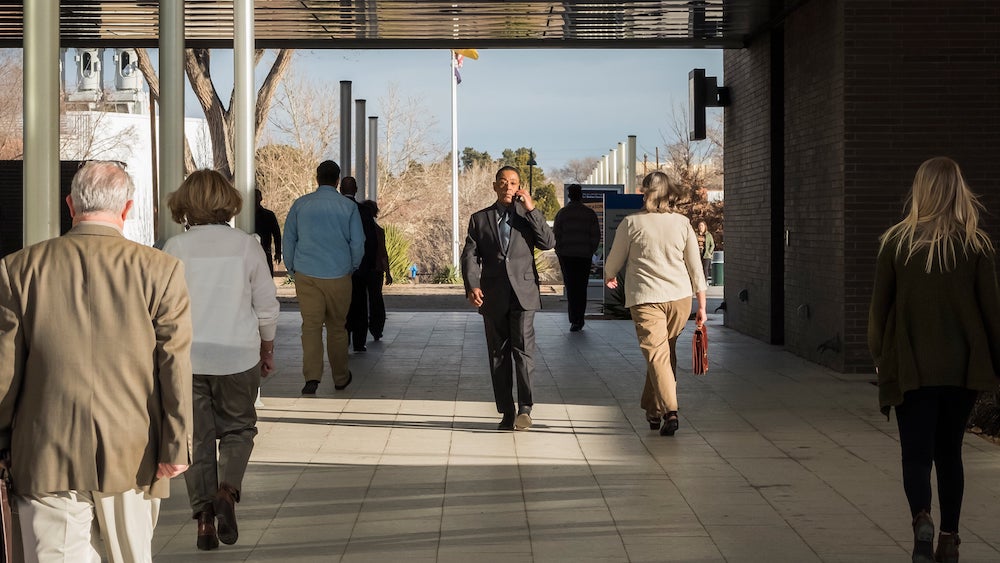 One big indicator the series is approaching the “Walter White era” is Gus starting to take ownership of the drug operation on his side of the US-Mexico border. Juan Bolsa (Javier Grajeda) heard about the attack on the Salamanca’s, unaware Gus faked it, and wants him to only make dummy runs for awhile until the heat’s off. As their street dealers will run out of product in a week, Bolsa wants Gus to start producing more drugs in Albuquerque, which we know becomes the secret of Gus’s success in the long term.

And in a wonderfully unexpected cameo, Gus goes to a university to meet with none other than nerdy Gale Boetticher (David Costabile), the likeable chemist introduced in season 3 of Breaking Bad. Is it a spoiler to say what happens to Gale? Perhaps. I’m not sure how many Better Call Saul viewers have yet to watch its parent show (probably not many), but suffice to say he was a fan-favourite character. It was great seeing Costabile back in this world, beautifully “reintroduced” singing Tom Lehrer’s “The Elements” on his walkman as he performs an experiment in an empty classroom.

It seems Gale is already involved with Gus’s operation, helpfully testing batches of meth for him, then offering to create a superior product. Intriguing that Gale’s background with Gus so closely echoes Walter White’s, as both are chemistry teachers with fragile egos, obsessed with perfection. The big difference is that Gale is very naive and almost childlike in his dealings with Gus, maybe unaware of what a dangerous man he is. Or willing to not think too much about it. Gus changed his demeanour to be more approachable around Gale and listened to him very closely, perhaps aware he’s one of very few adults who give Gale the time of day. So it seems Gale is going to be Gus’s “cook”, and perhaps give Gus the edge over the Salamanca’s by the time Hector leaves hospital. 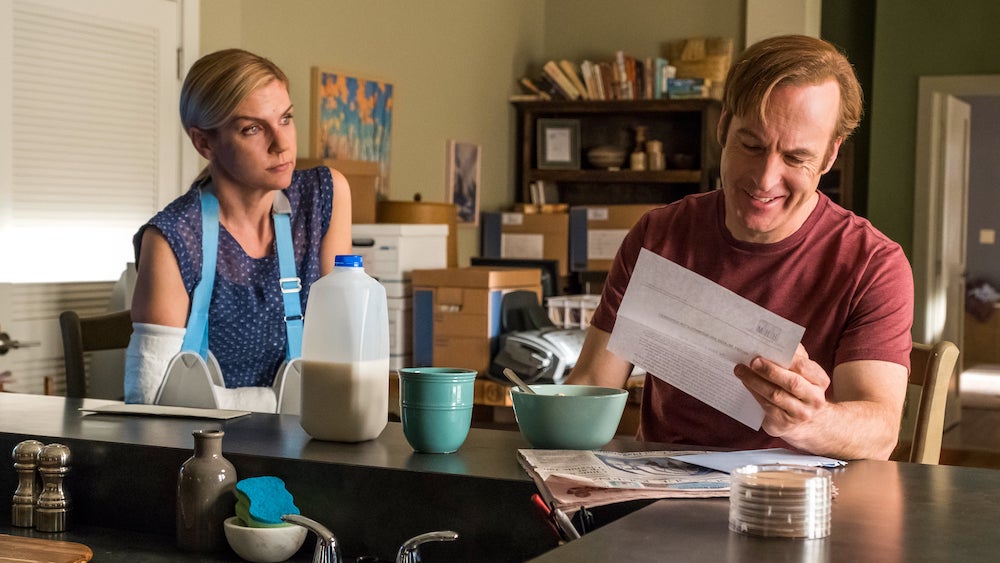 Remember Mesa Verde? They were a big part of the show’s first few seasons, and there was a welcome return to this storyline in “Something Beautiful”, with Kim (Rhea Seehorn) returning to work at their bank and being shown their ambitious expansion plans by Kevin Wachtell (Rex Linn). But she seemed perturbed by their plans, and I’m not exactly sure why yet. Maybe she just doesn’t like the “corporate monster” she’s helped create? I’m sure we’ll be digging into this much deeper, very soon.

My favourite scene of the episode involved Kim this week, as she met with Jimmy and finally handed him Chuck’s posthumous letter to his younger brother. Jimmy, distractedly munching cereal, read Chuck’s final words aloud in front of Kim, and they weren’t cynical of condescending. Instead, they were quite warm and praised what Jimmy has achieved with his life, rising above their petty grievances and saying in death what he could never tell his brother in life. But the words didn’t seem to touch Jimmy’s heart. He read them with no emotion or sense of occasion, letting the moment slip by, and seemed genuinely puzzled to see that Kim was emotional and had to leave the room after he’d finished. The episode ended on a clever visual of Jimmy’s bewildered expression, a door obscuring half his face, perhaps symbolising that Jimmy’s half gone now…. his soul unable to be reached, even when receiving the heartfelt praise from Chuck he became a lawyer to hear.