It’s Halloween this Saturday, so we’ve chosen 6 Horror Films Too Scary To See Twice. As the title suggests, not every film is a heartfelt recommendation for others to watch, but each one’s a film only those with nerves of steel should consider viewing this 31 October…

Paul Whitelaw • Face facts, horror fans: there has never been a more disturbing image in the annals of cinema than the trussed, hunched corpse of John Christie’s final victim, bricked-up behind a wall. Written by Ludovic Kennedy (look him up, he was so much more than the bloke who hosted Right to Reply), 10 Rillington Place tells the true story of British serial killer John Christie (Richard Attenborough), who murdered several women in his dingy post-war home. One of his innocent lodgers, played by John Hurt, went to the gallows for Christie’s crimes. 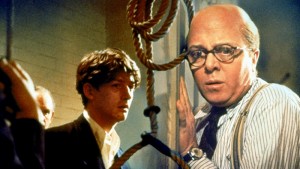 It’s one of the grimmest films you’ll ever see, as it itches with an insidious sense of bilious, unforgiving horror and—yes—humour. Not that it makes light of these dreadful crimes, but it’s mired in a claustrophobic layer of kitchen sink grime and dark, awful comedy that later gave rise to The League of Gentlemen. Attenborough’s subtle performance, so deeply unsettling in its blank normality, is the coal-scuttling definition of the banality of evil. He’s like a deranged Alan Bennett character.

Attenborough/Christie sets out his stall in the opening scene, as he suffocates a victim using cyanide and piping: “Do you feel a bit dizzy? Well that’s all the goodness taking effect.”

Ryan Gumbley • Having already breathed new life into Japanese horror with Ring (1998), Hideo Nakata took his ghostly creepiness to a whole new level with Dark Water. The film follows Yoshimi (Hitomi Kuroki) and her daughter, Ikuko (Rio Kanno). A single mum with a turbulent past she’s still in the process of running away from, Yoshimi appears to be constantly on the verge of another breakdown. This nervous, fraught energy is only exacerbated when mother and daughter move into a dingy apartment block with a few plumbing problems. 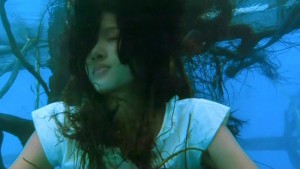 Water has a mind of its own in the film. It seems to be haunting and surrounding the pair, following them and trapping them in their environment. To Dark Water’s credit, the scares are timed to perfection and incredibly subtle. If I told you that the scariest thing about this film is a little red child’s bag, you’d probably call me a wimp, but the bag keeps turning up and following the family no matter how hard they try to rid themselves of it. It gives me chills just typing it!

The nervousness of the characters slowly seeps through the screen and into the viewer. You don’t even notice it happening, but before long, every empty elevator or abandoned corridor puts you on edge. And this is before we’ve even seen anything explicit. Nakata is a clever director who builds tension like no one. There’s no reliance on jump scares or cheap gimmicks to be found here. The painfully slow build-up of anticipation does nothing to prepare the viewer for the fright coming their way; quite the opposite is true.

What’s even more impressive is how adult themes of parenthood and mental health are woven into the narrative, forming the very basis of the scares we experience. But I can’t bring myself to watch it again—I have a feeling it would be even more scary when you can see it all coming. I’ve even avoided seeing the U.S remake with Jennifer Connelly.

Simon Cocks • Takashi Miike’s Ichi the Killer isn’t really a horror movie. It’s a weird, ultra-violent comedy that constantly attempts to push the boundaries of what is acceptable to show onscreen. I first watched it when I was 17, as a friend and I tried to find the most disgustingly gory movie that we’d both still be able to sit all the way through. This one really takes the biscuit when it comes to slaughter, and its unrelenting bloodthirsty violence is something I’d simply not ever be able to watch in its entirety again. 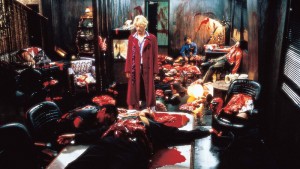 The story it tells is that of a Yakuza gang war and its disturbed and sadistic participants, including the manipulated Ichi (Nao Ohmori) and the depraved Kakihara (Tadanobu Asano). The raison d’être for this film is increasingly escalating brutal violence, with Kakihara at one point outright telling an opponent that “there’s no love in your violence” before biting all the skin off the man’s hand. Essentially, the film just takes some delight in the outrageous things it can get away with. Can it show a a guy suspended by hooks cutting into his skin? Sure. Why not pour some boiling water on him? Or slice off someone’s nipples? Or have a scene showing a man cutting off his own tongue? Or have numerous scenes of rape and torture? Or more blood-soaked scenes of throats ripped open than you can imagine? It should go without saying that if you’ve got a sensitive stomach, this is one to avoid.

Opinions are split on the film, though, with some praising Miike’s twisted and sick sense of humour and others repulsed by the cartoonish pointlessness of the abundance of extreme bloodshed. It’s like a hyper-violent anime realised in live action, and it’s hardly an easy watch. It goes to dark, depressing places that seem antithetical to the notion that it’s a black comedy, and you can’t help but get the impression that Miike just adores violence, especially when it comes to showing women being assaulted and abused. Ultimately, if you’re going to make a film this unrelentingly cruel and perverted, there had better be a point to it. Ichi the Killer lacks anything to justify its existence, becoming simply a hugely unpleasant watch that I’d never want to experience again.

Dan Owen • My choice is Pascal Laugier’s masterpiece Martyrs, which I believe to be the pinnacle of the so-called New French Extremity movement. It was a terrifying experience that crawled deep into the darkest recesses of my mind, but not because it was especially gruesome. No, the uncertainty of what Martyrs was actually about drew me, slowly but surely, as the story begins as a simple enough home invasion thriller—about a woman, Lucie (Mylène Jampanoï), holding the Belfond family at gunpoint, convinced they abused her 15 years ago—before suggesting a supernatural angle with a scarred creature Lucie keeps glimpsing in the corner of her eye… and then taking us into an altogether stranger, unsettling scenario involving a crazy truth about what the unassuming Belfond’s are involved with. 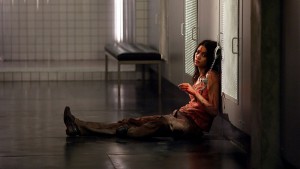 I daren’t say any more about Martyrs, really—out of fear I’m going to deny someone the same sense of grim discovery and a mind-spinning revelation that truly lingers in the soul. And while it’s an unsung masterpiece I don’t want to go through again, that’s for all the right reasons. There are a some very twisted and perverse ideas baked into Martyrs’ screenplay, which go far beyond its only occasional moments of violence and torture—indeed, much of the horror actually takes place in your own mind. And that’s the scariest place imaginable. Laugier was attached to direct a Hollywood remake of Clive Barker’s Hellraiser, which is frankly the most perfect marriage of director and material I’ve ever heard… but the studio let him go when it became clear he wanted the film to revolve around the gay S&M scene. It’s their loss. After watching Martyrs, you’ll know exactly what I mean. He’ll tear your soul apart.

Sarah Hughes • Just trying to explain the plot of Dario Argento’s Suspiria is a near impossibility. “So it’s about an American girl called Suzy who has won the chance to attend a prestigious ballet school in Austria but the school is really run by a crazy coven of witches and within minutes of her arrival all hell essentially breaks lose…” Put like that it doesn’t sound particularly scary—although you can certainly see where Ryan Murphy got the idea for huge swathes of American Horror Story—let alone so scary that you’d never watch it again but bear with me because Suspiria’s power comes not from plot but from the tension Argento expertly builds. 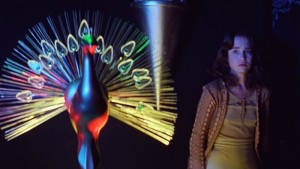 Made in answer to American classics such as Rosemary’s Baby and The Omen—also films where what you don’t see is almost as important as what you do—Suspiria is a masterclass in ramping up the fear factor through use of tracking shots and score. Thus the opening 15 minutes alone are among the most scary ever put to film: from the soundtrack (by Italian prog rock band Goblin) kicks in your hands start to feel clammy and they pretty much stay that way throughout the entire film even the gore count rises, the deaths start piling up and the whole thing heads towards its luridly over-the-top climax.

And that’s why plot is an irrelevance—Argento’s sole interest is in frightening his audience half to death and he does so repeatedly. Pushing Technicolor to its limits he succeeds in taking the slasher film to delirious new heights and the result is the equivalent of the sort of fairground ride you know you don’t really want to go on but can’t quite resist anyway. And, just like that fairground ride, it leaves you feeling woozy and queasy and sick once you come down.

I first saw it in my late teens, a time when I was devouring classic ’70s horror, spending nights watching everything from Black Christmas to Burnt Offerings, and nothing has stuck in my mind so strongly before or since. In truth I can barely remember how the whole thing ends; just that it terrified me, I definitely screamed and almost 15 years later watching Darren Aronofsky’s Black Swan, which owes a huge debt to it, I felt my palms sweating all over again. Suspiria might be a film that’s all atmosphere and no story but when the atmosphere’s this frightening I’d argue you don’t need anything more.

Andrew Bemis • While I’m not a hardcore gore-fiend, my resolve is usually strong enough to get through just about any work of extreme cinema. I’ve sat through many notorious titles, some of which were valuable experiences (Salo, Antichrist), while others were not (Cannibal Holocaust). Still, I could watch any of these again if I had to. So, in thinking about which movie I’d have real hesitation to revisit, I was reminded of an answer a teacher of mine gave me when I asked him what movie scared him more than any other… 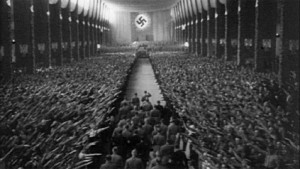 His answer was Triumph of the Will, Leni Riefenstahl’s notorious work of Nazi propaganda. His explanation was that no imaginary horrors could compare with the actual atrocities of the Third Reich. While Riefenstahl’s film doesn’t contain footage of the concentration camps or other disturbing content, the movie is more chilling for the complete absence of this reality. By depicting life in Hitler’s Germany as a return to the country’s best of times that should make any young Aryan male proud, using filmmaking techniques that wouldn’t be out of place in an Army recruitment film for any nation, Triumph of the Will remains a disturbing testament to cinema’s ideological power.

Those are our choices! Feel free to mention your own in the comments below. Has any scary movie done its job so well that a second viewing is out of the question…?