Cary Joji Fukunaga, the director, writer, producer and cinematographer of Beasts of No Nation, has an eye for striking images. Which is a good thing because war films rely on them perhaps more so than any other genre. From Paths of Glory (1957) to Apocalypse Now (1979)—two films that Beasts owes a clear debt to—war films have always relied on images to do the impossible: convey the horror of war. This then prompts the question ‘what is the aim of a war movie?’ There’s a quote attributed to Francois Truffaut: “there’s no such thing as an anti-war movie”. If war is so horrific that it can never be done justice on screen, does any attempt to portray it necessarily undersell the trauma and end up romanticising, or at least prettifying, it instead?

These are questions that Beasts never confronts, but Fukunaga chooses to make his task even greater by delivering the story of this entire war in an unnamed African country, at an unspecified time, through the eyes of a young boy. This is both a strength and a weakness. The boy is Agu (Abraham Attah), and the films opens with him and his friends playing in his village that is, as yet, untouched by the conflict affecting the wider country. This scene pulls a sly trick, though it might be unintentional, by appearing to us through the hollowed-out body of an old TV set—this being the first Netflix original film production. 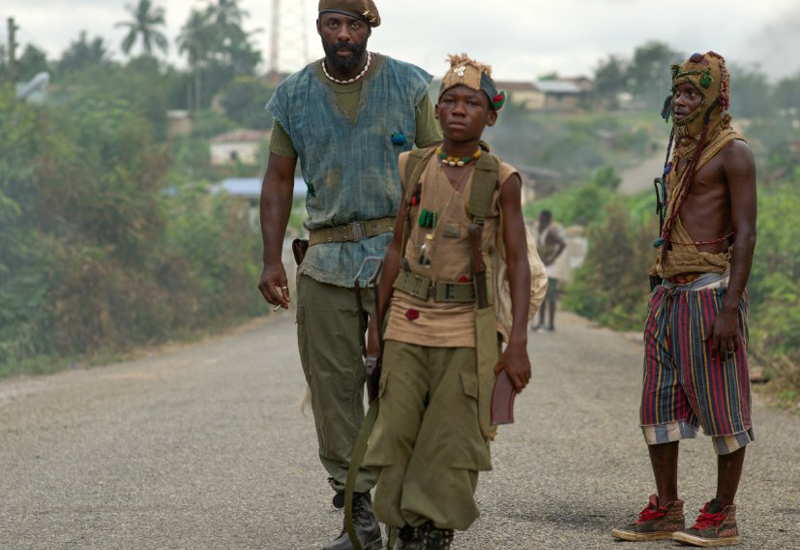 The early scenes show us the ordinary life that Agu and his family lead slowly turn into an extraordinary one. Caught between the military uprising and the various rebel factions that seem to be advancing towards the village, women and children are frantically shipped out to who-knows-where in a scene of mass hysteria. During the pushing and shoving, the only person who has space to transport more people refuses to take Agu because he’s a boy. His mother and sister depart, leaving him to stay in the village with his father and older brother. Eventually, the inevitable happens, and Agu is forced to flee alone and head out into the forest, where his life as a child soldier begins.

The star of the show is Idris Elba, playing the Commandant to a troupe of children too young to be held fully responsible for the atrocities they commit. He’s a man who seems to believe his own hype; the fact that his amateurish setup resembles a band of Victorian pickpockets in fancy dress more than a lethal guerrilla army doesn’t trouble him one bit. That’s not to say they aren’t lethal though. The violence is both stylised and recurrent. Blood splatters on the lens of the camera as Agu is urged to make his fist kill by burying a machete into the skull of a pleading innocent.

All that happens is orchestrated by Elba’s Commandant. Even when he’s not in the frame, he’s the central focus, and perhaps the only interesting character in the entire film. Agu might be where Fukunaga wants our attention for the most part, but that’s not what his film achieves. The child is a little more than a sketch; a poor, generic child with whom we have to sympathise—but there’s no real intrigue there, and he doesn’t surprise once. The nameless Commandant, on the other hand, represents something disgustingly alluring—an egocentric man who surrounds himself with damaged kids he seeks to control. He doesn’t even seem to care that much about the war he’s fighting—his aim is not military, but personal. 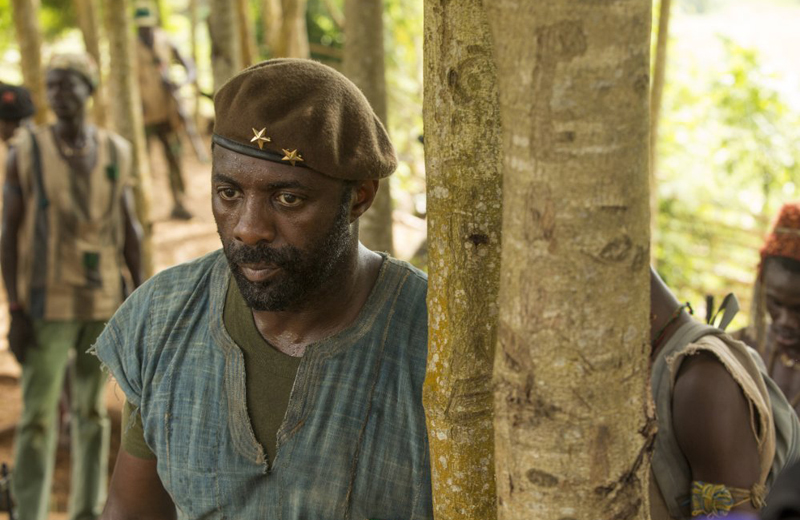 The film uses a voiceover to get inside Agu’s head, though it’s a device that never fulfils its aim. The dialogue he speaks to the viewer is often obvious, expository or too dreary to evoke any emotion. When he’s not speaking via voiceover, he’s not doing much to convey thought or feeling any other way either. Glances into space that are retroactively filled with meaning by the score or the viewer’s sympathy suggest a lack of willingness to truly probe the character and unlock his psyche. Put simply: it’s lazy.

If it weren’t for Elba’s titillating and engrossing performance, which helps his character linger over every frame, the film wouldn’t be half as powerful as it is—even if I did detect a cockney twang in a couple of the actor’s deliveries. Some of the vagueness about the war and why it’s happening can be forgiven because the child’s point of view the film takes grants it some license to avoid delving deeper. If the film doesn’t quite come together, it’s not for this reason; it’s more to do with the fact that the protagonist is too broad and the film lacks unity. There’s very little sincerity here, and you don’t feel that the director has anything at all to actually say about war. Instead, it’s a technical exercise; one that’s impressively staged, but ultimately hollow.