Great Scott! To celebrate the 30th anniversary of Back to the Future—which technically happened last July, but is being celebrated more on 21 October because today’s the day Marty and Doc Brown travelled to in Back to the Future Part II—below are 30 amazing facts and pieces of trivia you (probably) didn’t know about the popular sci-fi trilogy. 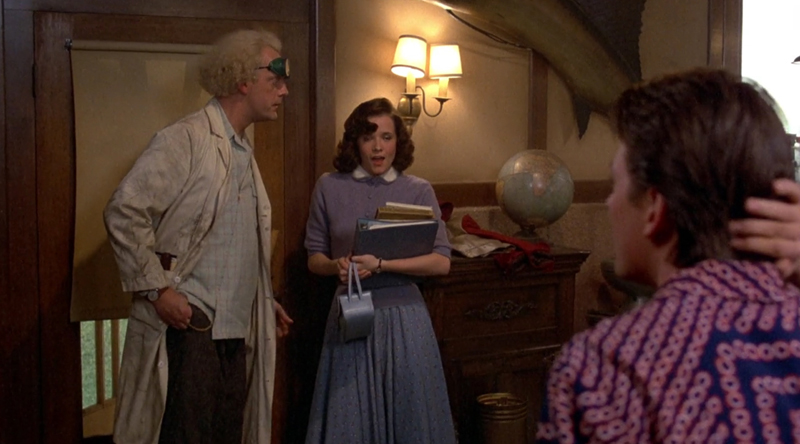 1. Christopher Lloyd and Lea Thompson may have appeared in five movies and one TV movie together, but their only on-screen dialogue happens in Back to the Future when Lorraine has an awkward greeting with Doc at his house.

2. The reason for Doc Brown’s hunched stanch is entirely down to the height difference between the 6’1″ Christopher Lloyd and his 5’4½” co-star Michael J. Fox. 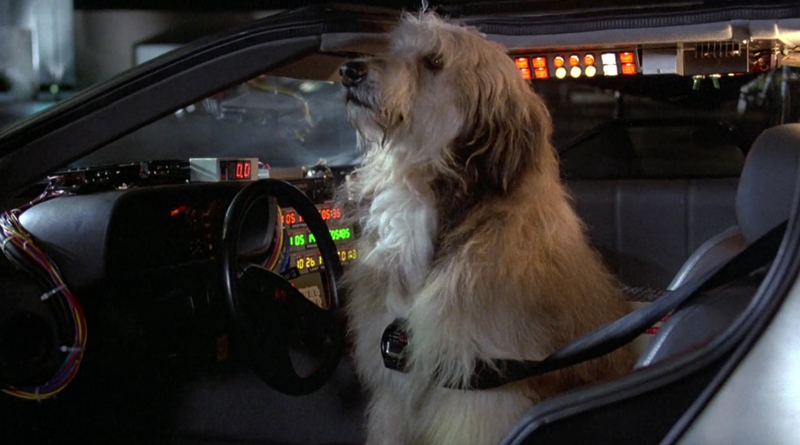 4. Spare a thought for unfortunate actress Melora Hardin (The U.S Office). She was cast as Marty’s girlfriend Jennifer, and was only replaced by Claudia Wells because she towered over Michael J. Fox——who replaced original star Eric Stoltz. 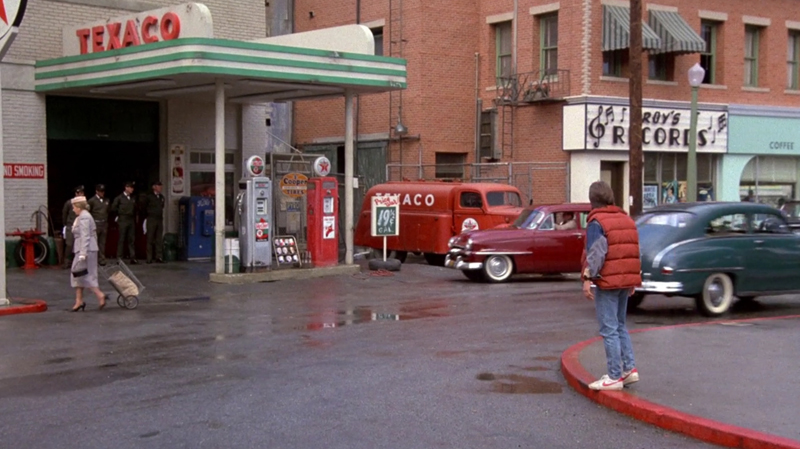 5. Texaco is a prominent gas station seen in 1955 (see above), 1985, and 2015 (see below). Coincidentally, Christopher Lloyd’s maternal grandfather was a founding member of the oil company. 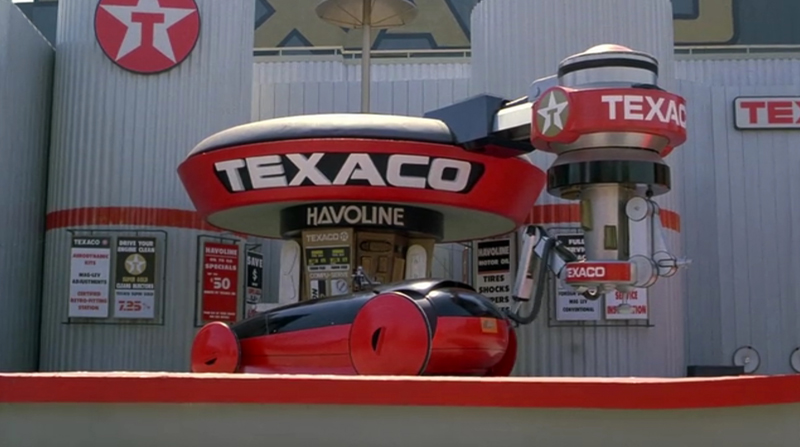 6. Alan Silvestri’s iconic score for BTTF doesn’t actually begin until 18 minutes into the film. The composer also used 85 musicians, which was a record number at the time. 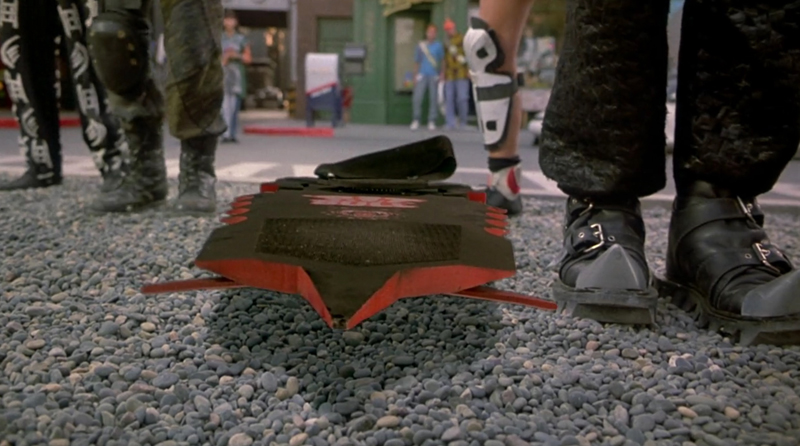 7. Biff’s hoverboard ‘Pit Bull’ was originally going to be called ‘Mad Dog’, to foreshadow his Old West character in Back to the Future Part III. 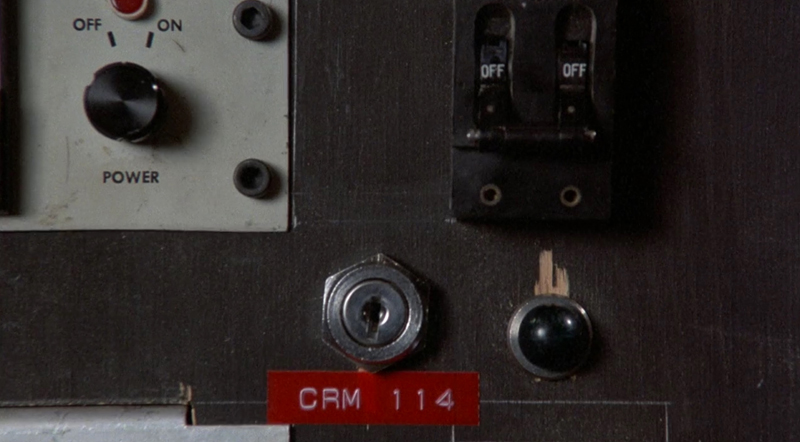 9. There’s a nod to Stanley Kubrick in the first scene where Marty McFly plugs his electric guitar into an amp. The dial is labelled ‘CRM 114’ — a recurring code in many of Kubrick’s films. 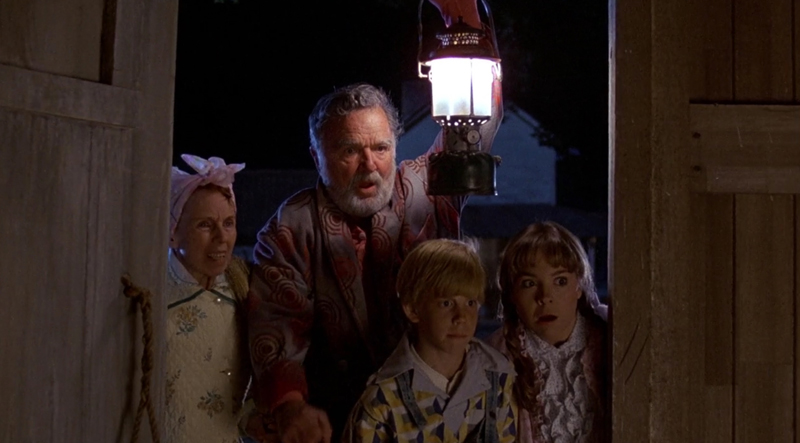 10. The barn Marty crashes into when he first arrives in 1955 is owned by the farming Peabody family, who have a son called Sherman. In the ’50s, the Rocky and Bullwinkle cartoon featured a segment about a time-travelling dog, Mr Peabody, and his owner Sherman.

11. Doc Brown is credited by Marty and Jennifer as always saying “if you put your mind to it you can accomplish anything”, and yet Doc never utters that phrase in all three films. 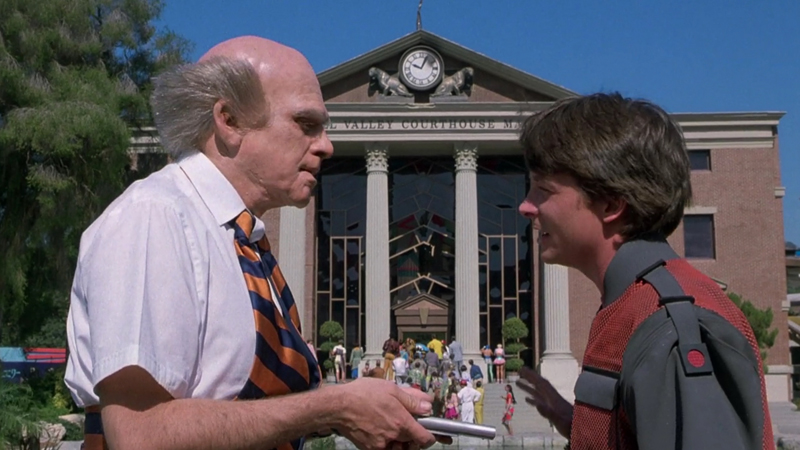 12. Have you ever noticed that the Clock Tower ledge is still broken in shots set during 1985 and 2015 (see above), because Doc Brown broke it off in 1955 during the thunderstorm? That is, apart from the scene where Marty’s given a ‘Save the Clock Tower’ flyer in BTTF (see below). 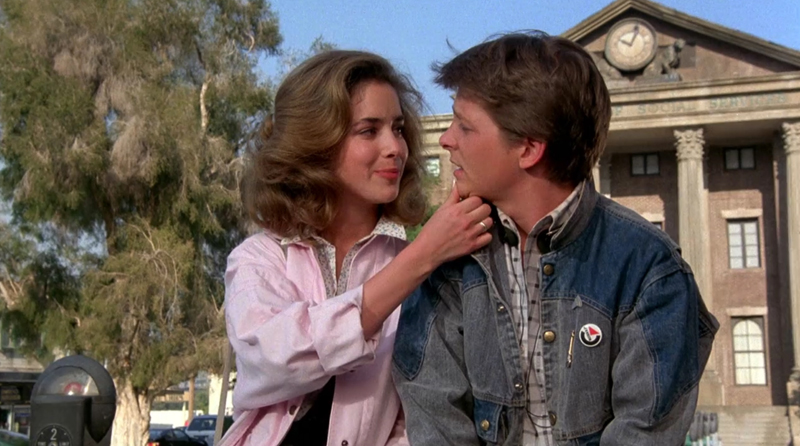 13. Back to the Future Part II predicted the existence of Pepsi Max, which has been a popular flavour of the company’s soda across Europe since 1993. Maybe someone working for Pepsi saw the movie and liked the name?

14. President Ronald Reagan was approached to play Mayor Hubert in BTTF3, as he was a known fan of the original film and quoted it during a Presidential address (see above). BTTF memorably poked fun at Reagan’s acting background, too.

15. Marty never once drives the DeLorean car in BTTF2. 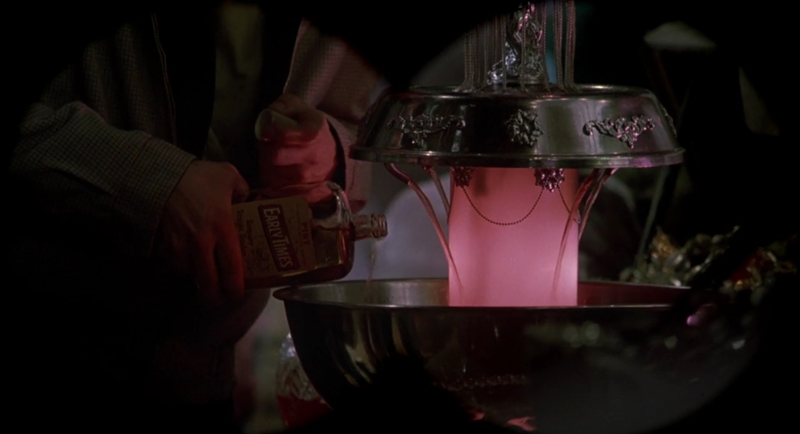 16. In BTTF2 it’s revealed that Biff spiked the punch being served at the ‘Enchantment Under the Sea’ dance, which is later drunk by George McFly — perhaps helping give him the courage to punch Biff to defend Lorraine’s honour later?

17. Clint Eastwood granted personal permission for this name to be extensively used in BTTF3 as Marty’s alias. 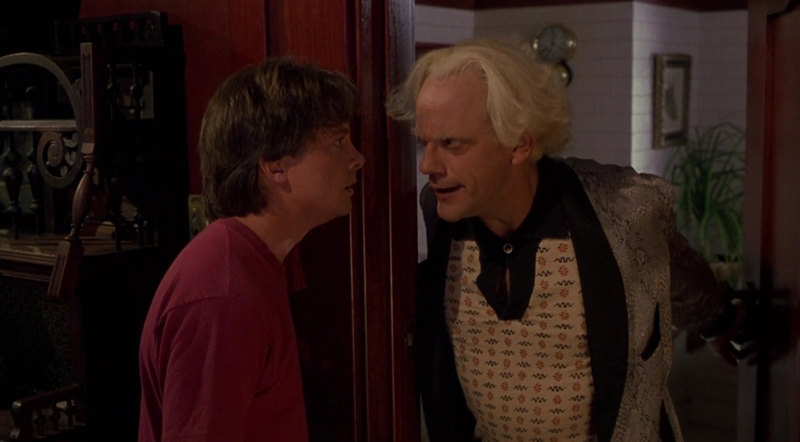 18. In BTTF, Doc regales Marty with the story about banging his head on the bathroom sink while trying to hang a clock, which gave him the design of the Flux Capacitor. In BTTF3, when Doc runs into his bathroom in 1955, you can actually see the clock hanging above the toilet he slipped off (above). 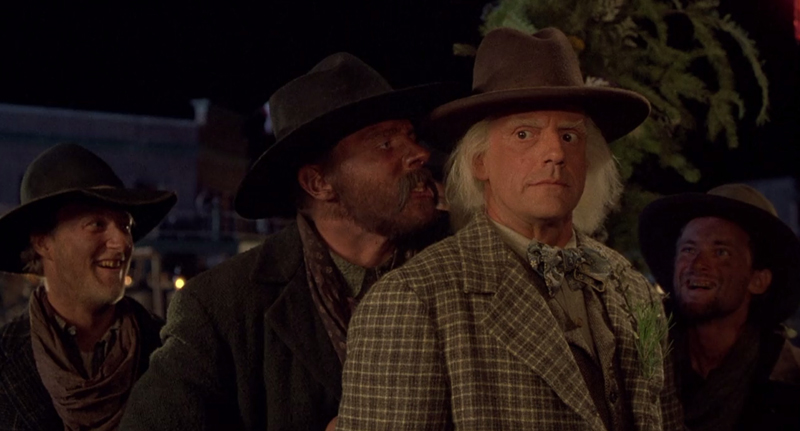 19. Doc only ever interacts with one of the Biff’s during the entire trilogy, in BTTF3 with the ‘Mad Dog’ ancestor. 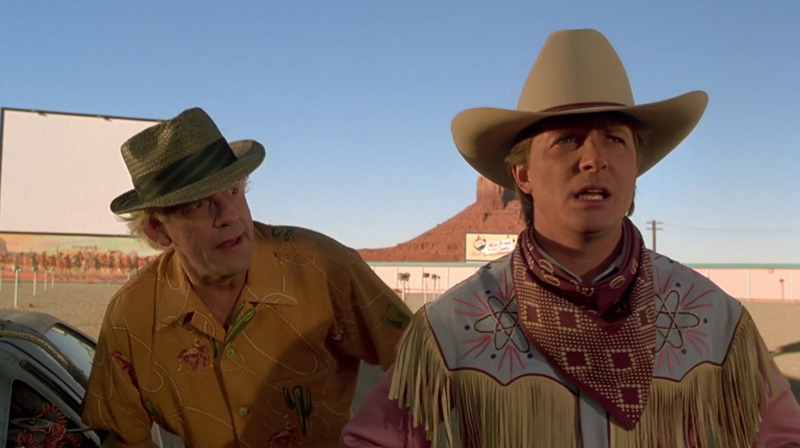 20. Marty’s cowboy outfit in BTTF3 has the symbol for atomic energy embroidered on it (see above).

21. The editor of the Hill Valley newspaper in BTTF3 is “M.R Gale”, named after the screenwriter of the BTTF trilogy Bob Gale. 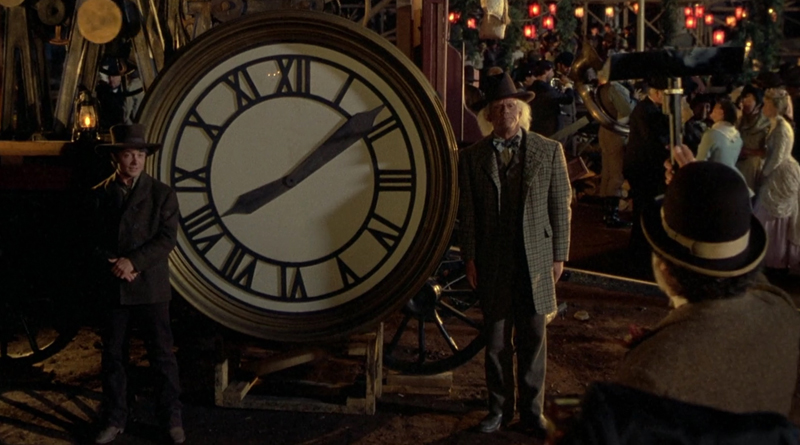 22. When the Doc and Marty have their photo taken in front of the clock in BTTF3 the time is ‘eight past eight’, a nod to the 88 mph velocity the DeLorean must achieve to travel through time. 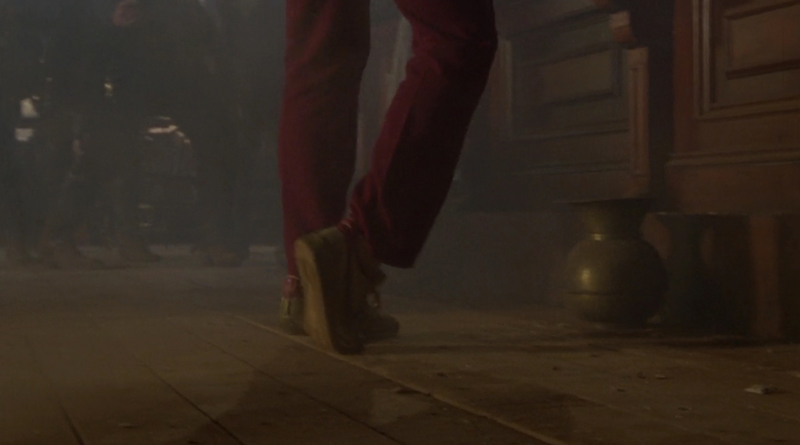 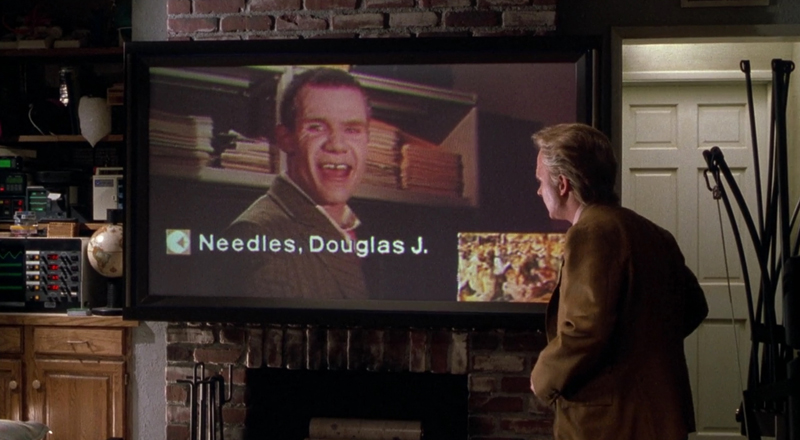 24. The character of Needles in BTTF2 and BTTF3 is played by Flea from the Red Hot Chili Peppers. 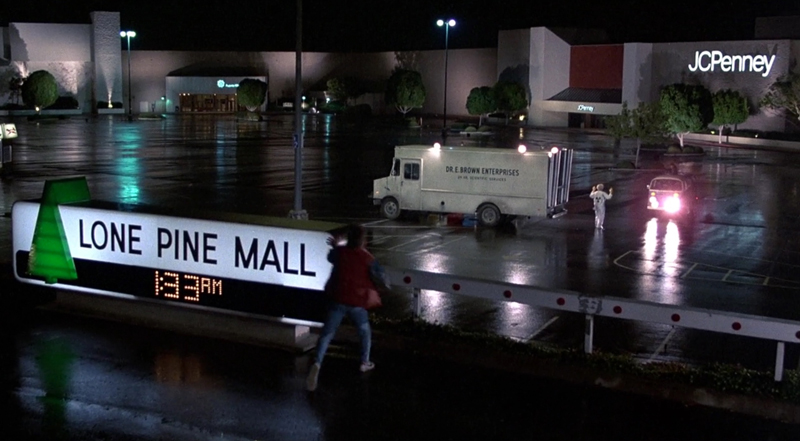 25. When he first arrives in 1955, Marty mows over a pine tree with the DeLorean. At the end of the movie, after arriving back safely in 1985, it’s noticeable that his original place of departure ‘Twin Pines Mall’ (named after said trees) is now called ‘Lone Pine Mall’, proving Marty altered history. 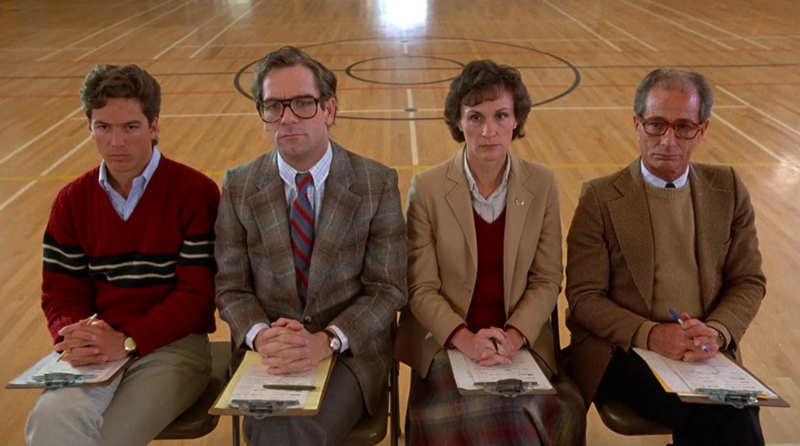 26. Musician Huey Lewis, who performs the “Power of Love” ballad that became synonymous with BTTF, appears in the first movie as the high school teacher complaining that Marty’s band are too loud (see above, second from the left). 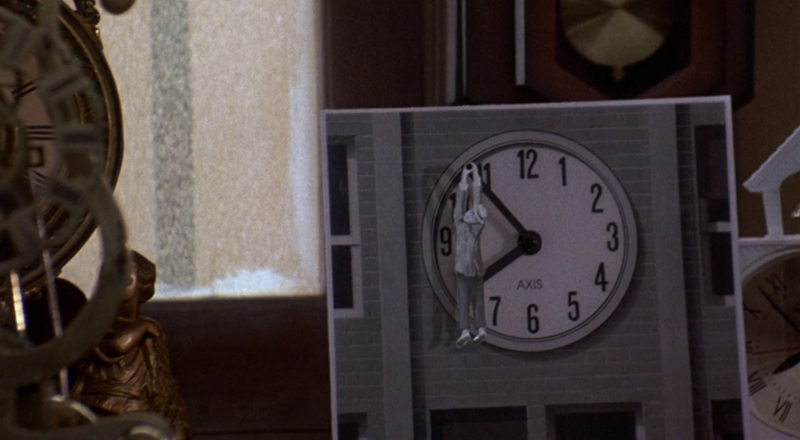 27. Doc Brown dangling from 1955’s Clock Tower references an iconic stunt by Harold Lloyd in the 1923 silent movie Safety Last! — who is also foreshadowed in the opening shot of BTTF with a tiny cartoon Lloyd seen dangling from one of the Doc’s many ticking clocks. 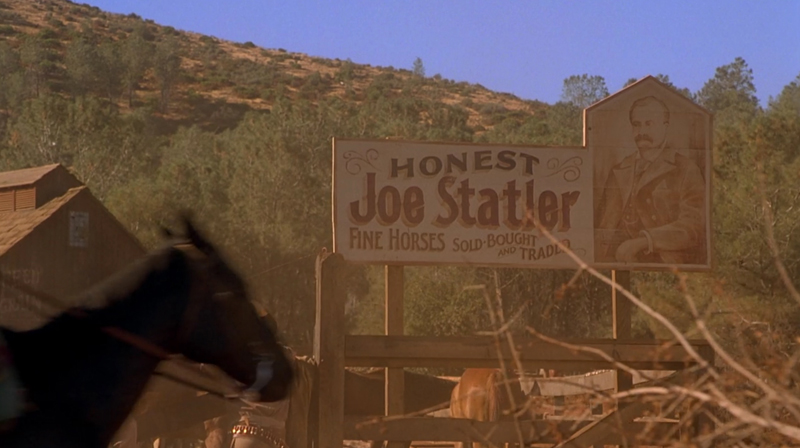 29. In BTTF3, you can see a sign for ‘Honest Joe Statler’, a horse dealer working in 1885. The first words we hear in BTTF is from a radio commercial for Statler Toyota—a family dealership that’s apparently moved with the times from horses to cars. 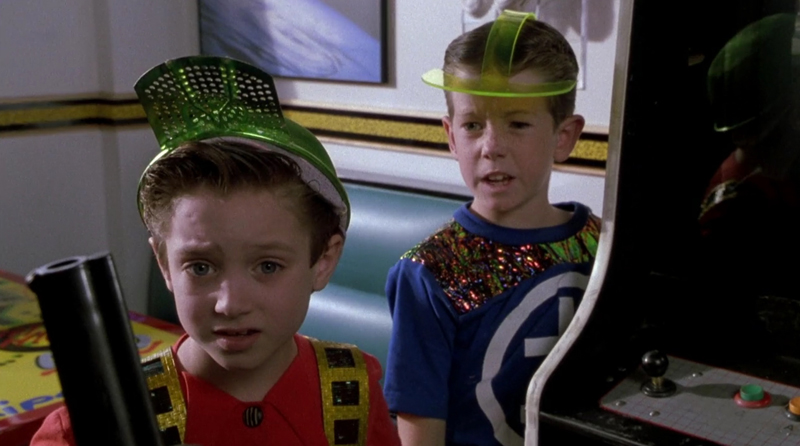 30. A seven-year-old Elijah Wood plays one of the two children in the Café 80s in BTTF2, who are unimpressed by Marty playing the Wild Gunman arcade game (which also foreshadowed the Old West time period of BTTF3).

So there you have it. Not every nugget of trivia the Back to the Future trilogy has to offer, but hopefully some of those facts escaped your notice until now.

The future is now. Happy Back to the Future Day!