As there are only three episodes left this season, “Trace Decay” came loaded with information that helped clarify a few things, but it also obfuscated others. Still, for a mystery show it’s going a solid job making you hang on each actor’s every word, and see if events confirm your theories. I just wish more of the show was straightforward fun, because I think it’s lacking a simpler level of storytelling and may be scaring away more casual viewers.

The situation with Bernard (Jeffrey Wright) was very nicely expanded on, after he discovered he’s a Host last week, as Ford (Anthony Hopkins) used him to cover up Theresa’s murder. Bernard’s a slave to Ford’s every whim, but having his memories erased of the awful truth must have been an acceptable reward in many ways. Or is it? In a later flashback, a past version of Maeve (Thandie Newton) pleaded with Ford to let her keep the memories of her slain daughter, as it’s all she had left of her child. Maybe Bernard felt much the same way about his relationship with Theresa, but ultimately knowing you were compelled to strangled your lover is a memory you’d be happy to lose. 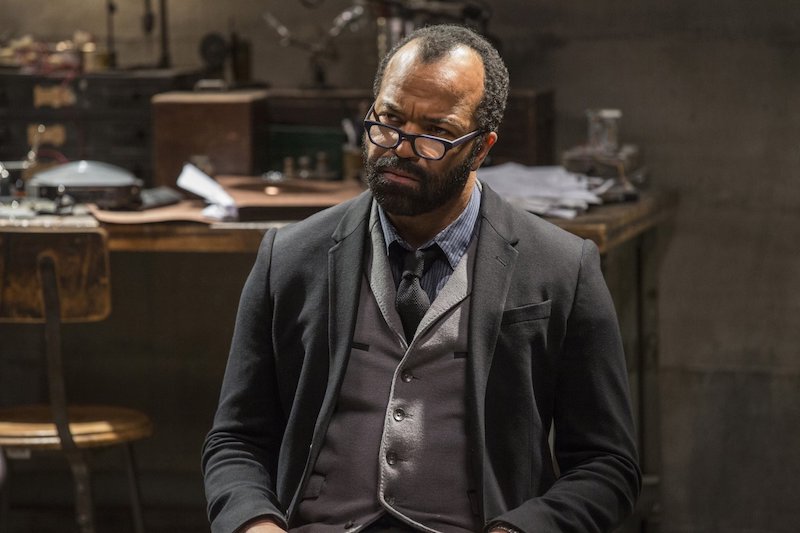 However, while Bernard was meticulous about his clean-up job, it seems that Ashley (Luke Hemsworth) has noticed some odd behaviour. After approaching Bernard to offer condolences about Theresa, knowing he was intimate with her, Bernard’s reaction was unusual because his memory of this relationship had been removed by that point. Ashley sensed something was a bit wrong with how Bernard responded, so is this the start of Ashley coming to realise the truth?

Ford was riding high this episode, looking very pleased with himself, having literally got away with murder-by-proxy, and now with a fully compliant Bernard back under his command. But a fight for control is brewing between himself and Charlotte Hale (Tessa Thompson), with the latter recruiting prissy Lee (Simon Quaterman) to help her continue to smuggle information out of the park — now using the enormous synthetic brain of mothballed Abernathy (Louis Herthum), Dolores’s original father who malfunctioned in the premiere. Very glad to see that Herthum will be back on the show, as his mannerisms as an automaton were exemplary. 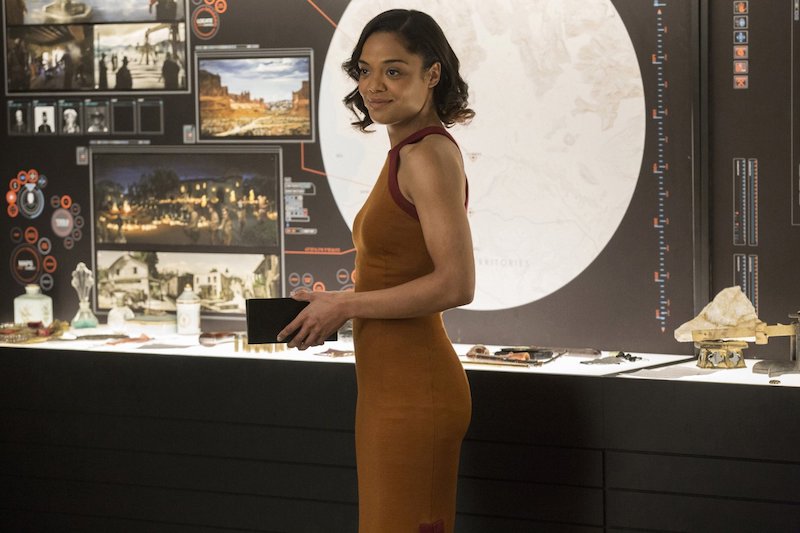 Not for the first time this year, the story only really gained a heartbeat when Maeve’s story was the focus. I think this is because there’s less mystery about this storyline, just a lot of high-pressure drama that’s going to explode any moment. I’ve been unconvinced by how Maeve has been leading Felix (Leonardo Nam) and Sylvester (Ptolemy Slocum) a merry dance, but “Trace Decay” made matters slightly more believable. Here, Sylvester was finally taking action and trying to ‘brick’ Maeve, now she’s talking about recruiting other technicians to help her escape the facility (after getting a vertebrae explosive removed). She was also granted special powers inside the park itself, with the ability to control other Hosts by vocalising commands to them—effectively becoming the author of a new story inside the park. It made sense that Sylvester’s had enough and views Maeve’s desires as a step too far, but I also believed in the idea that Felix is more compassionate towards Maeve because she’s “awake” (i.e. alive). Shutting her down isn’t a process now, it’s premeditated murder, and he can’t go along with that. Maeve also asserted her authority a lot better, by slashing Sylvester’s throat with a scalpel when she learned of his aim to terminate her, and then having Felix patch him up as he bled on the floor. It was a demonstration of power that will linger in Sylvester’s mind and should ensure his total obedience in future.

There were a lot of Hosts having flashbacks in “Trace Decay”, too. Maeve was again tormented by a “past life” memory of the Man in Black (Ed Harris) murdering her young daughter, before surviving a knife plunged into her stomach. It was a harrowing moment also being remembered by the MIB, over a campfire with travel companion Teddy (James Marsden); for him, a formative moment after returning to Westworld following the death/suicide of his wife. He chose to do something unspeakably evil and out of character, as a test of his own feeling… and he felt nothing. But he did see a level of realism to Maeve, in her darkest moment, before she fled his blade and collapsed in a field where the infamous Maze has been drawn out in soil… 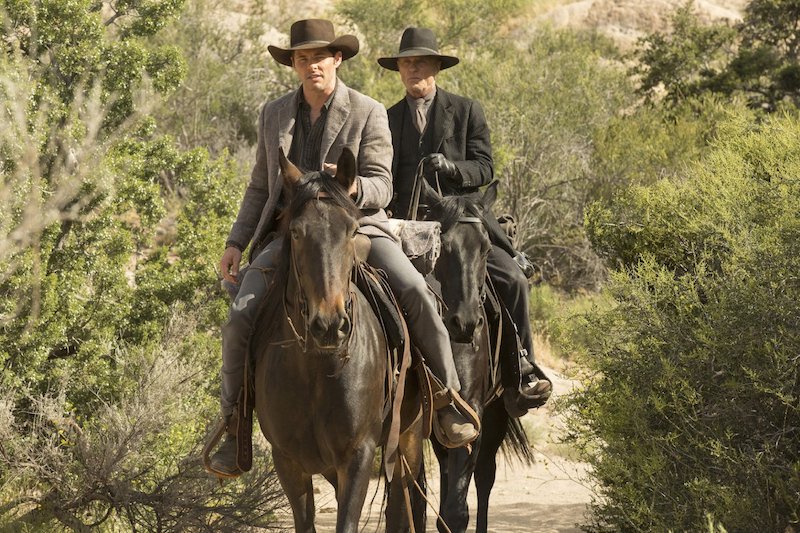 I’m not entirely sure what’s happening here, however. It makes sense that Maeve first “awoke” after suffering a personal trauma, and that the MIB saw a humanity in her eyes as a consequence of his heinous actions that he’s never noticed in another Host before… but the Maze just confuses me. Had Maeve created that pattern in the field? If so, why? And why would seeing that Maze inspire so much deep thought from the MIB? There seem to be lots of dots missing here, so it feels like we need more information to properly hang the narrative idea and explain everyone’s motivations. They have a few hours left to make it work.

Dolores also had another flashback, but hers felt more important than the rest. After reaching “home” with William (Jimmi Simpson), revealed to be an empty riverside where a small town’s buildings once stood, Dolores found herself mentally transported back to the days when the place was bustling with people. Including the church, of which only an old steeple remains now. Dolores is getting freaked out about the realism of her “memories”, and they appeared to confirm another very popular theory that we’re seeing two time periods on Westworld. One clue was seeing Angela (Talulah Riley) in the town during Dolores’s flashback to the town’s past—i.e the beautiful blonde Host who was prepping William for his Westworld experience before boarding the train. Angela also appeared in the MIB/Teddy storyline as they tried to find Wyatt, looking disheveled on the ground. It was clear evidence of two eras playing out side-by-side (unless you buy into the other theory that some Hosts are clones of each other). But the time periods theory holds more water, as we saw Ford visit the location where a town once stood, as that’s where he’s decided to build his new narrative. So Dolores and William simply can’t be existing in the “present day” storyline with all the other characters. 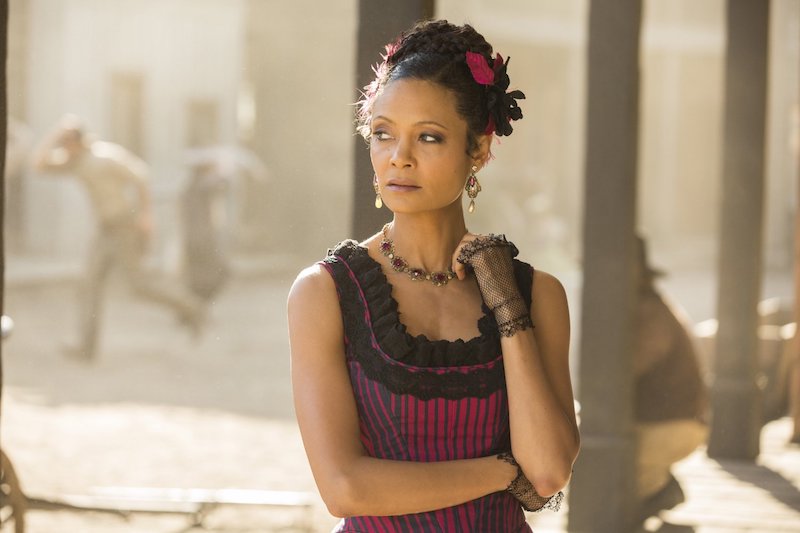 Teddy also had a flashback, of the MIB attacking and interrogating his beloved Dolores, which caused some acrimony between the two of them. But of more importance is the fact Teddy and the MIB were attacked by a large man dressed as a Minotaur (I guess the Maze really must be close then), who is one of Wyatt’s men, and that the damsel-in-distress Angela was likewise part of Wyatt’s gang.

“Trace Decay” was a good hour of Westworld, but some aspects of the story were bewildering and I’m not entirely sure it needs to be this way. It may please those of us who enjoy picking over events with fine tooth combs, watching episodes multiple times, and poring over fan theories on the internet, but I worry the show may be losing more viewers who just aren’t approaching it the right way

Written By
Dan Owen
More from Dan Owen
With the help of a magic ticket, a young film fan is...
Read More