Updating Westworld (the 1973 movie Michael Crichton wrote and directed) is a great idea because enough time’s passed for a different approach to the concept of a futuristic theme park where the robot inhabitants break their programming and put the human clientele in danger. It’s an evergreen idea (Crichton basically switched robots for dinosaurs when writing Jurassic Park), but it’s not something modern audiences will be easily surprised by, which presents an opportunity to dive deeper into the ethical questions Westworld throws up.

Jonathan Nolan (writer of brother Christopher’s movies like Interstellar) and his wife Lisa Joy (a co-producer on Burn Notice) have taken the reigns of HBO’s new sci-fi drama, which the studio hopes will echo the success of Game of Thrones. It has to achieve a similar trick, in a sense, of having to lure people not immediately drawn to the western/sci-fi genre with strong characters, a gripping story, and enough thematic complexity to ensure Westworld doesn’t exhaust itself after half a dozen episodes. My overriding worry about the show is that Crichton’s film clocked in at a brief 88 minutes, comfortably achieving its goals, whereas HBO will want their adaptation to last closer to 88 hours.

I’m not sure if that’s possible, but “The Original” is at least a confident and beautifully made premiere that delivers the promise of a more subtle and sophisticated take on the Westworld concept. But the basics are intact, given twists and flourishes. The main difference is that it’s not immediately clear who the human and robot characters are, as we’re initially lead to believe that handsome “Newcomer” Teddy Flood (James Marsden) is the human protagonist of the story, arriving by train into the small town of Sweetwater and catching the eye of beautiful local Dolores Abernathy (Evan Rachel Wood). Dolores is definitely one of the park’s androids, blissfully unaware of her true nature and the false reality she lives in, but the script subverts expectations when Teddy’s life is threatened by the mysterious ‘Gunslinger’ (Ed Harris)—a man who doesn’t flinch when struck by Teddy’s bullets, and instead kills him with return fire. Then—wham!—Teddy’s back on the incoming train, memories erased and starting another ‘loop’ of activity. 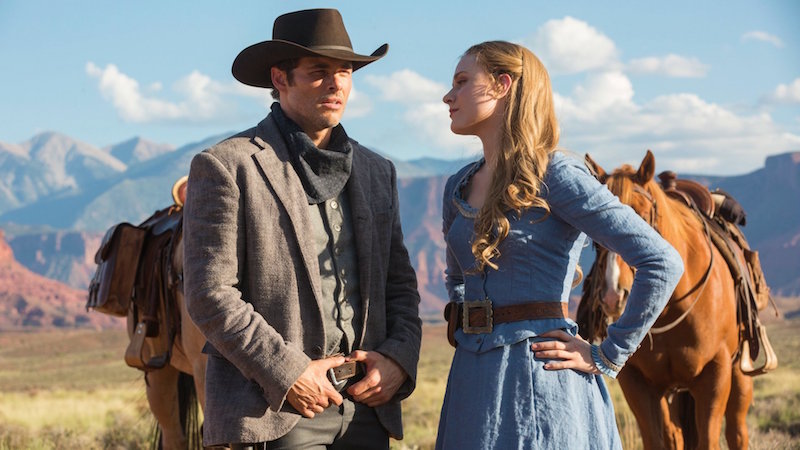 So, in a clever twist, the movie’s iconic mechanical villain (played by Yul Brynner) has been reimagined as a veteran Westworld customer who’s gone rogue—but why? Or maybe he’s a robot who’s already evolved way beyond the others, somehow? There’s enough uncertainty here to keep you guessing.

We also see much of the park’s behind-the-scenes work, when it might have been tempting to hide that aspect of Westworld much longer. Working in secret to ensure their expensive entertainment runs like clockwork is Bernard Lowe (Jeffrey Wright), the lead programmer who starts to notice some of the “Hosts” (robots) behaving strangely after the facility’s creative director, Dr. Robert Ford (Anthony Hopkins), installs new “reverie” code to make them appear more human. Joining them is brusque operations leader Theresa Cullen (Sidse Babett Knudsen), whose role is to ensure Westworld doesn’t spiral out of control — so she’s understandably perturbed when the odd behaviour of the Hosts escalates to include off-script violence. More on the outskirts of the story this week is prissy narrative director Lee Sizemore (Simon Quarterman), who rails against interruptions that would spoil the interconnected storylines he’s created for the customers; and Ashley Stubbs (Luke Hemsworth), the head of security.

I found the scenes taking place beyond Westworld the most interesting of the two realities presented because it was like peeking behind the curtain on a futuristic Disneyland. There are some beautiful designs for the equipment the team use to create their robots (who arrived spread-eagled inside plastic wheels, like alabaster versions of Da Vinci’s ‘Vitruvian Man’), plus little touches like seeing scientists sanding the muscle contours of robotic horses, and weird moments like when we’re introduced to Robert having a chat with an outmoded robot—a stereotypical Old West barfly whose glitchy movements are accompanied by telltale buzzes and whirrs. 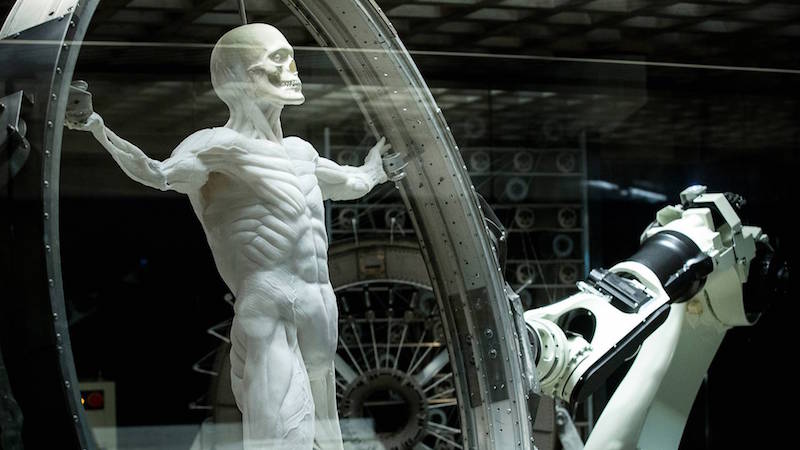 But that’s not to say the action inside Westworld wasn’t interesting. It’s just that it’s much easier to understand the narrative of the geniuses trying to keep a lid on their creation’s malfunctions. The storyline inside the theme park itself has yet to build a head of steam, as this episode was just about planting seeds. We learned that Teddy is an automaton, somewhat fated to always interact with Dolores, and that Dolores may be slowly evolving beyond her programming without the obvious physical tics that started to afflict her loving father. Throughout the hour, a fly would land on the face of various Hosts, and their prescribed behaviour wouldn’t allow for them to bat it away or even take much notice… but in the final shot, Dolores reacts as a human being would be swatting one crawling on her neck.

I hope Nolan and Joy have a master plan for Westworld, because it still doesn’t strike me as a TV show with longevity built into the concept. This premiere felt like a great first act, and I could well believe it’s only going to be a three or four part miniseries. A meticulous version of the movie’s arc may get us through this first season, but beyond that it’s unclear how this show will sustain itself once various novelties have worn off. “The Original” does set up the idea that The Gunslinger is on some kind of secret mission, as we realise he scalped someone because a mysterious puzzle is printed on the underside of their head flesh. Maybe he knows he’s a Host, which explains why he wasn’t surprised to survive Teddy’s bullets? But he isn’t just going around shooting humans like Yul Brynner’s version of the character. It suggests that the biggest change to HBO’s Westworld is going to be how the robots evolve to develop self-awareness, and what they choose to do next—but it won’t be outright violence and bloodshed against their human ‘masters’. It’s taking Crichton’s simple idea, then fleshing it out with more nuanced characterisations and a more believable way for the story to develop. 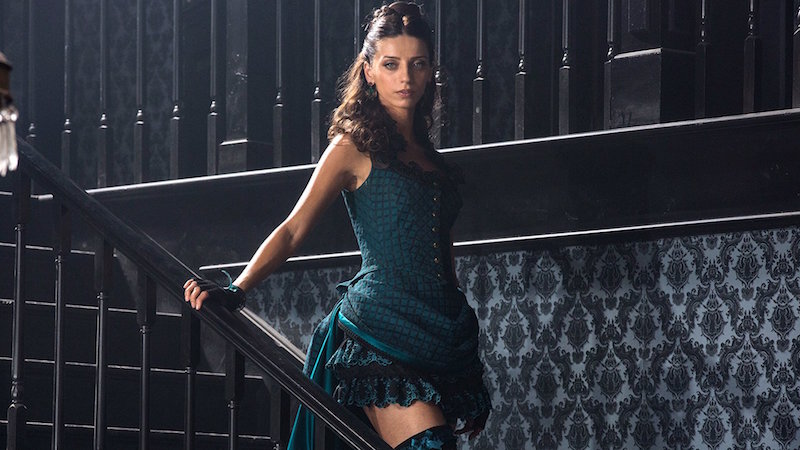