From its opening image—an aerial tracking shot careening over the side of an Ethiopian quarry—Uncut Gems is a movie about life on the edge. But despite the film’s visceral brutality and its closely-hewn sense of violence, it’s protagonist, Howard Ratner (Adam Sandler), isn’t a traditional criminal. He’s not a violent person or a drug-addict, and he’s not someone who, under normal circumstances, lives his life in relative proximity to danger. Howard’s risky behaviour, the dangerous side of his life, is more abstract than physical: he’s a gambler. Howard invites risk and excitement into his life by placing bets on sporting events and by taking high-stakes financial chances in his business practice, thereby “betting” on the outcomes of his sales. The film, directed by brothers Josh Safdie and Benny Safdie, tells of the collision between Howard’s larger-than-life schemes with reality; the vanishing point at which his luck and his fate nearly outrun one another.

The movie opens in Ethiopia in order to show the discovery of a rare and evidently valuable black opal. Then we cut to Howard in the midst of a medical check-up, and his working life as a jewellery merchant on New York’s 47th street. Howard’s priorities and preoccupations come to the fore of the action quickly. He has to dodge the threatening associates of a man named Arno (Eric Bogosian), to whom he owes money while balancing his family life (wife and kids) with his time in the city—which includes a relationship and shared apartment with one of his female employees, Julia (Julia Fox). 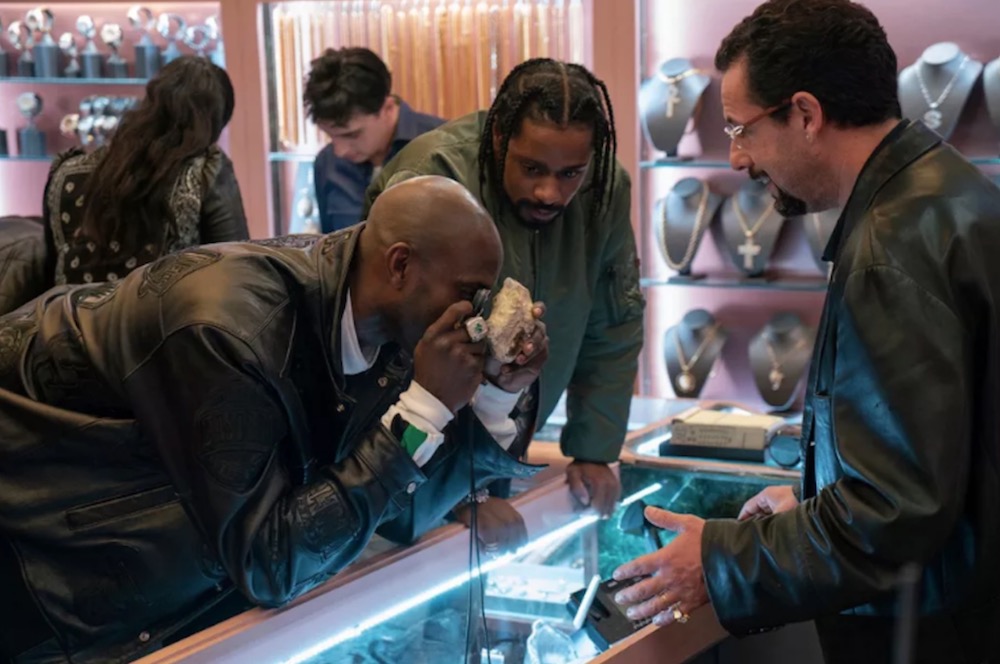 In New York, Howard’s hustling his merchandise, which he does with the help of employee Demany (Lakeith Stanfield), who connects Howard’s business with celebrities and high-rollers. One such celebrity, who Demany brings into the jewellery shop, is basketball player Kevin Garnett (himself), who arrives just in time for Howard to show off the black opal he’s ordered from the Ethiopian miners. Howard hypes the gem to Garnett and, after a frantic exchange of exaltations and banter, he becomes “convinced” to loan Garnett the gem in exchange for Instagram clout and, as collateral, Garnett’s NBA championship ring—which Howard promptly pawns in order to place a bet on Garnett’s game against the New York Knicks. And so begins a series of ridiculous gambles and pay-offs and the crafting, by Howard, of an elaborate and impossible scheme, which at first appears to be en effort to earn enough money to pay back Arno, but in reality is a play to spite the debt, enrich himself, and have fun while doing it.

Howard’s life is a balancing act, and the Safdie brothers set the action of Uncut Gems at the various intersections and apices of that act. Howard is shaken down by Arno’s heavies at his daughter’s school play. His attempt to get his gem back from Garnett leads to a fight with his girlfriend and an altercation with rapper The Weeknd. Even Howard’s Passover dinner can’t escape the looming complications of his unpaid debts. Howard navigates all of this by lying, thinking on his feet, and betting on the way that his associates and his enemies will behave. The web the Safdies, along with their writing collaborator Ronald Bronstein, weave for Howard becomes a cross-section of life. The concerns of the film go well beyond the wheeling and dealing of 47th St. to encompass authentic observations on Jewish American life and, what’s more, on a contemporary value system that affects anyone who pays attention to pop-culture and celebrity in the 21st-century. Howard’s life is forcefully compressed and pressurised by the confines he’s created for himself—not just his gambling but also his susceptibilities, his family ties, and his sentimentality.

Sandler plays Howard with agitated and authentic energy, digging into his dramatic chops and reflecting his comedic genius; bending, but not quite effacing, his movie-star persona into Howard’s personality. The Safdies have always cast a variety of non-actors in their films, and here that includes not only genuine New Yorkers who are new to showbiz but also celebrities. Sandler is faced with the challenge of acting opposite both varieties of non-actor, and he does so with a fast-paced rhythm that grounds the documentary aspects of experimental casting firmly within the narrative of the film. Sandler’s performance reflects not only Howard’s inner life but the film’s milieu. 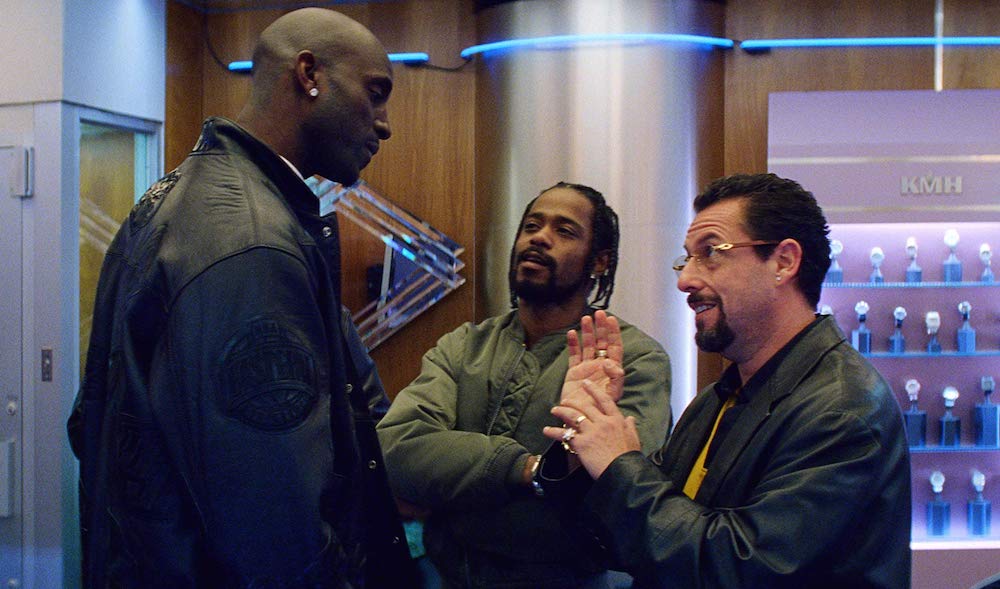 Similarly, the movie goes beyond looking just at Howard in order to look at the world at the large—not just the one that the filmmakers have created but the one that they refract. Uncut Gems is set in 2012, and though it may be centred on a specific community, the Safdies tie the narrative into real-life events that make the movie feel like a genuine look at an ongoing cultural moment. The movie explores the hyper-real absurdity of a world obsessed with status and hype, of instantaneous gratification and rapidly changing communication norms. Plot points hinge on text messages and cell-phone pictures, Instagram posts and internet reputations. Kevin Garnett and The Weeknd (the two celebs whose roles in the film go beyond cameos) are both stars whose singular real-life personas depend on the ways that they’ve crafted their appearance online, on stage, and in the arena.

Howard, the character, isn’t a celebrity, but he stands to benefit financially from his association with stardom (when Julia gets too-close-for-comfort with The Weeknd, she defends herself to Howard by claiming that she was trying to make a sale) and therefore he has to reckon and wrestle with the outsized egos of the entertainment world. And, in turn, that world never treats him fairly. His friends, associates, and even family view him as a sort of absurdity even as they rely on him—a doomed figure who can’t be, nor should be, saved from his self-destructive impulses. It’s clear to us, though—seeing Howard through the prism of a film that never leaves his side nor fails to sympathise with him—that the Safdies want us to know that he’s simply misunderstood. It’s an argument that’s as comically absurd as it is moving. 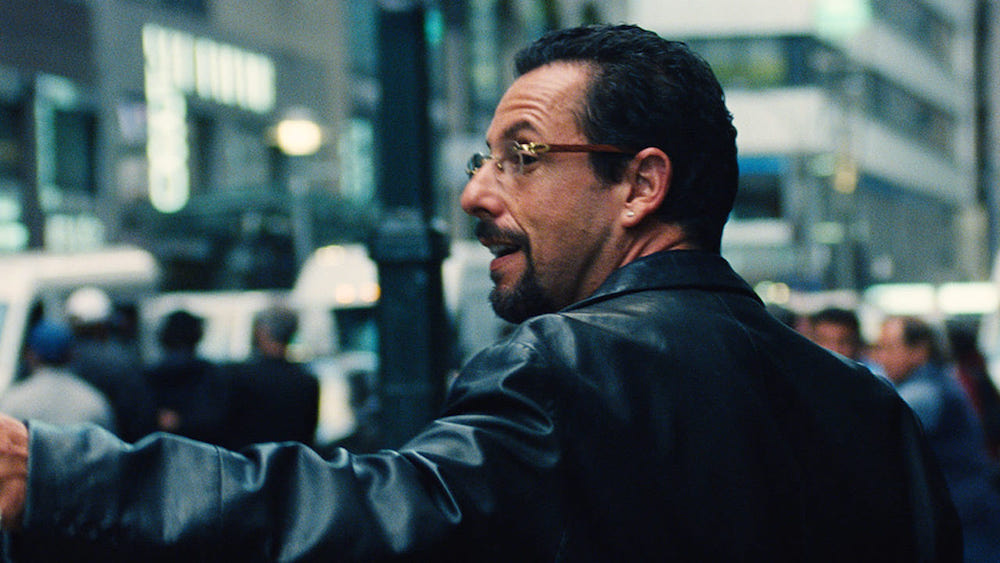 There’s a particular moment of serenity after Howard wins an un-winnable bet and celebrates with Julia in his downtown apartment. Sandler’s perversely raw happiness at his victory, along with a genuinely touching and empathetic moment in Daniel Lopatin’s music score, uplifts and delights. When things go well for Howard, the movie feels like heaven. And when they go wrong, it’s hell. The consequences of Howard’s absurd actions, the precarious tower of inevitable downfall that he builds around himself is stressful to behold, but it’s not so much that the pounding anxieties of the film contrast with its moments of triumph as it is that they feel like a part of the same intricate and layered vision of reality.

Howard’s manoeuvring and scheming do little in the way of helping him survive the tribulations of his trade, but the scariest threats are the ones that he brings upon himself, which he does often and compulsively as if profanely cursing his own life in mighty defiance of reality and of rationality. The positive forces in his life, moments of connection with friends or family, are fleeting. Happiness and loss are, to Howard, secondary emotions to winning and losing. They’re distractions, ultimately, to a game that he finds far more rewarding than anything else, and even though it’s one that he could opt out of, he instead constantly chooses to play. 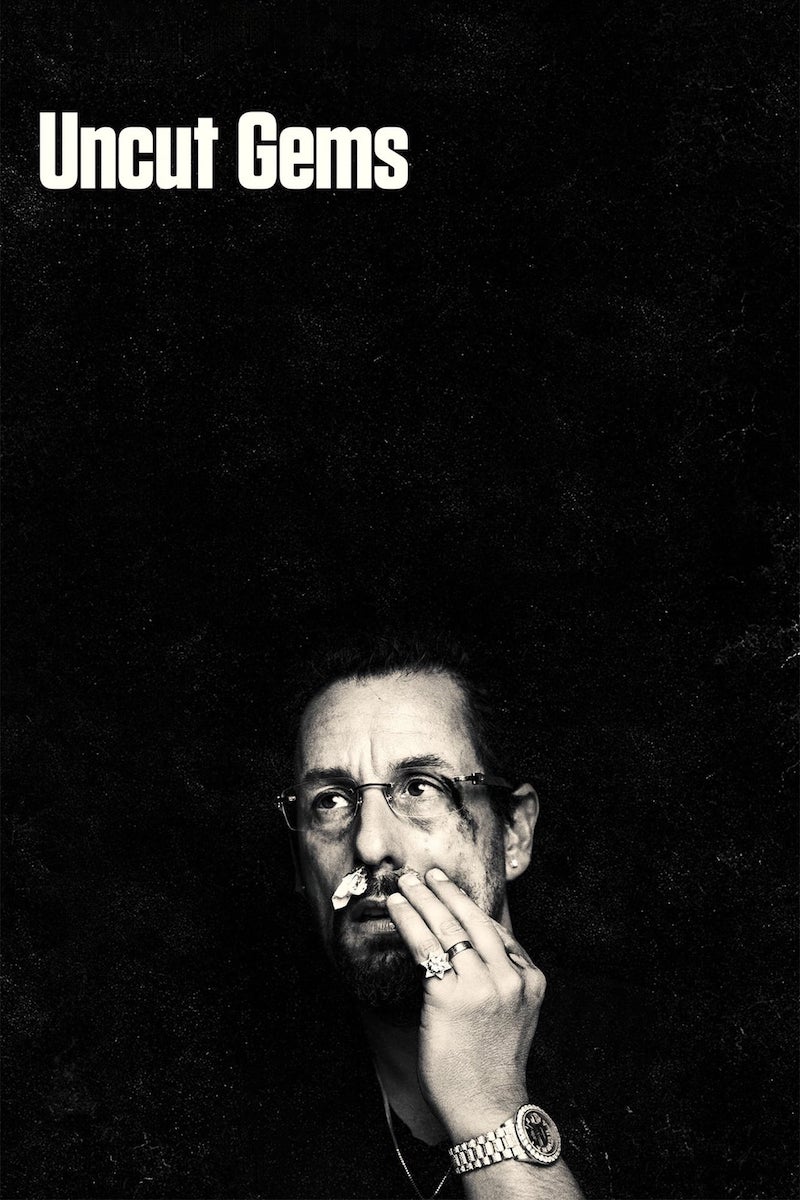