Directed by Kihachi Okamoto, The Sword of Doom never benefitted from wide distribution outside Japan, so didn’t earn the recognition of similar films–like those of the (superior) Akira Kurosawa and (inferior) Nagisa Oshima. This nicely cleaned-up Blu-ray release is therefore most welcome.

The opening shot is a deliberate nod to Kurosawa’s Yojimo (1961), but very soon we realise Sword of Doom is much more than a Kurosawa-wannabe. Based on a novel by Kaizan Nakazato, set in Japan during the decline of the Shogunate rule, and exploring the concepts of karma and absolution, it has more in common with European cinema, and would sit comfortably alongside the philosophy-obsessed French New Wave of the 1960s.

On its release in Japan, it didn’t perform too well, perhaps because it lacked the light, often humorous touch of Okamoto’s popular satirical movies. Audiences were reportedly repelled by the relentless amorality of the uncompromising central character, Ryunosuke Tsukue (Tatsuya Nakadai), a Ronin assassin hellbent on chasing the next kill to satiate his increasingly insane bloodlust. It did, however, capture the imagination of young filmmakers forging their own New Wave in the Japanese film industry. Along with Okamoto’s other samurai movies, such as Samurai Assassin (1965), it quickly garnered a cult following and is now recognised as a genre-defining classic.

The cast all do a great job, sometimes with minimal movement and subtle expressions, and Tatsuya Nakadai gives a measured and deeply complex lead performance as Ryunosuke Tsukue. In many scenes his face is almost mask-like, eyes fixed and staring, though as his mental breakdown progresses, slowly but surely, the tiny twitches and glances become very telling. Eventually, his self-possession begins to crumble and the mask cracks with manic grins and leering madness. It really is a fascinating portrayal of a man battling with his inner demons before deciding to accept them as welcome guests rather than deal with their origins.

In a few of the movie’s quietly electric scenes, Nakadai shares the screen with Toshirô Mifune as samurai master Toranosuke Shimada, the one swordsman that just might have the skills to best Ryunosuke Tsukue, yet he repeatedly avoids situations that could lead them into conflict. Here we have two of the most recognisable leading men of Japanese cinema, both renowned for their many roles for Akira Kurosawa, and Nakadai would effectively replace Mifune as the director’s muse, going on to star in two of Kurosawa’s most accomplished films: Kagemusha (1980) and Ran (1985).

Every scene is shot with great consideration for composition and camera motion. The monochrome cinematography is beautiful throughout, and the violent set-pieces are astonishingly well planned and executed. Okamoto constructs each scene with an eye for structural composition across the frame, treating the screen as a picture plane to carry his arrangements of light and dark forms. In this respect his approach is painterly and starkly Modernist, though he counters this with an ingenious use of three-dimensional space, stacking characters from crisp close-up to distant smudges beyond the focal field. Sometimes the camera rests on a pleasingly wide composition, giving us time to take it in and appreciate its simple beauty, but just as often the camera moves dynamically through the sets and amongst players as they hit their marks precisely on cue. Sword of Doom is an absorbing piece of pure cinema and remains aesthetically rewarding to the very last, brave frame.

Aesthetics aside, it offers up multiple readings of a very rich subtext. The movie follows the somewhat bleak story of a quietly insane serial killer, who just happens to be given licence to realise his compulsions because he’s a formidable samurai. It seems that he seeks oblivion and escape from a destiny he believes is inevitable—can he be truly evil if events are beyond his control and governed by strict codes of honour and cruel destiny? His father seems to think so and openly admits that things would’ve been better if he’d never been born. Yes, even his own father condemns and disowns him, not to mention his wife who also betrays him! The scene where he confronts his wife in a snowy landscape is tragically beautiful.

It’s said that the soul of a samurai is his sword. If so, then the only thing that validates that soul is the bloodying of the blade. What other purpose does a sword have? The sword also has phallic connotations, and it’s broadly hinted at throughout the film that his suppressed lust for men (which would be completely unacceptable in Shogunate Japan) has been perverted into an almost vampiric bloodlust for killing them. It’s unclear whether he accepts this aspect of himself and this fear of self-awareness maybe what drives him relentlessly along his nihilistic path. Only when killing does his face reveal any honest emotion. In the final orgiastic battle, there’s a moment when bodily fluid flows freely (blood in this case) and another moment of almost orgasmic paralysis as he leans upon a freshly slain opponent for physical support. The bliss of death by proxy.

Sex and death are real, visceral experiences, though death is one thing we can’t directly experience and remains forever objective–the culmination of, and release from, our destiny. We can walk out of the film, but Ryunosuke Tsukue cannot. He’s locked into his course of action. But, is he immoral out of choice, or is his life beyond his control? The concept of destiny absolves the individual from culpability, for if there is no free will, then all consequences are inevitable. This dilemma has formed the core of many myths since the beginning of storytelling. The human challenging the gods–or the individual challenging pre-destiny and forging their own unique one. Here, the antihero follows an unchallenged destiny, even if it leads them into evil.

We may witness the death of others, imagine our own, but death will ultimately rob us of that direct experience. Tsukue is killing others in lieu of his own ‘demons’ and memories–being in the moment of battle is his way of eliminating all other thoughts, desires, and memories. This is explored in the film’s seemingly supernatural sequence when he’s haunted by the ghosts of those he’s slain, the only real hint that the mounting death toll has affected him emotionally, and perhaps he feels some measure of remorse. It also clearly indicates that he’s become increasingly unhinged as the plot progresses.

The film could be read as an exploration of psychosis and behavioural self-medication. In this aspect, Tsukue reminded me of Rutger Hauer’s character in The Hitcher (1986), who keeps on killing in more and more ostentatious ways in the hope that, one day, he might meet someone who’ll stop him and offer final release. The idea of a character in a film attempting to escape their destiny is doubly ironic, for film is by its very nature a fixed, recurring pattern of events and the destinies of its characters will always remain unaltered. An eternal recurrence.

Sword of Doom’s influence can’t be overstated. The film that most clearly wears this influence on its sleeve is probably Shogun Assassin, a 1980s re-hash of the first two movies in the Lone Wolf and Cub series. The Lone Wolf character is equally remorseless as a shogun-less samurai and demonstrates similar, almost supernatural prowess with his sword, but is redeemed by his single-minded tenacity and stubborn survival against all odds to protect his baby son. The popularity of the 26-film series featuring the blind swordsman Zatoichi, also owes a great debt to Sword of Doom.

The new high-definition digital restoration of The Sword of Doom, with uncompressed monaural soundtrack, really shows off the exquisite cinematography in full 2.35:1 aspect ratio, along with some subtle yet effective sound design. The Blu-ray extras are a little disappointing for something calling itself a ‘special edition’, however. We get the theatrical trailer and a partial commentary by film historian Stephen Price. He does a great job of referring back to the original novel, placing it against a historical backdrop and pointing out where the film differs, and includes potted biographies of the cast and crew. The commentary becomes more of an audio-description at times as he describes, shot by shot, what we are looking at–a gift for anyone writing a Media Studies essay on narrative structure and technical codes! But then, he jumps whole swathes of the film when he feels the content doesn’t support his own critique. I hear that there will also be a critical essay by Geoffrey O’Brien, though this wasn’t accessible on the review copy.

The finale is one of the most impressive and insanely well-choreographed action sequences in all of cinema. The stylistic composition and inventive use of varying focal depths is breathtaking. The seeds of the ‘heroic-bloodshed’ genre germinated here–only this is more ‘anti-heroic-bloodshed’. Tsukue dispatches what seems like a hundred fellow samurai (I lost count at 76), in what must be the highest on-screen death-per-minute of any film from that era. The only redemption offered the central character, and the viewer, is the motiveless moment and beauty of each perfect frame. One after another in a predestined order, with no release, until… 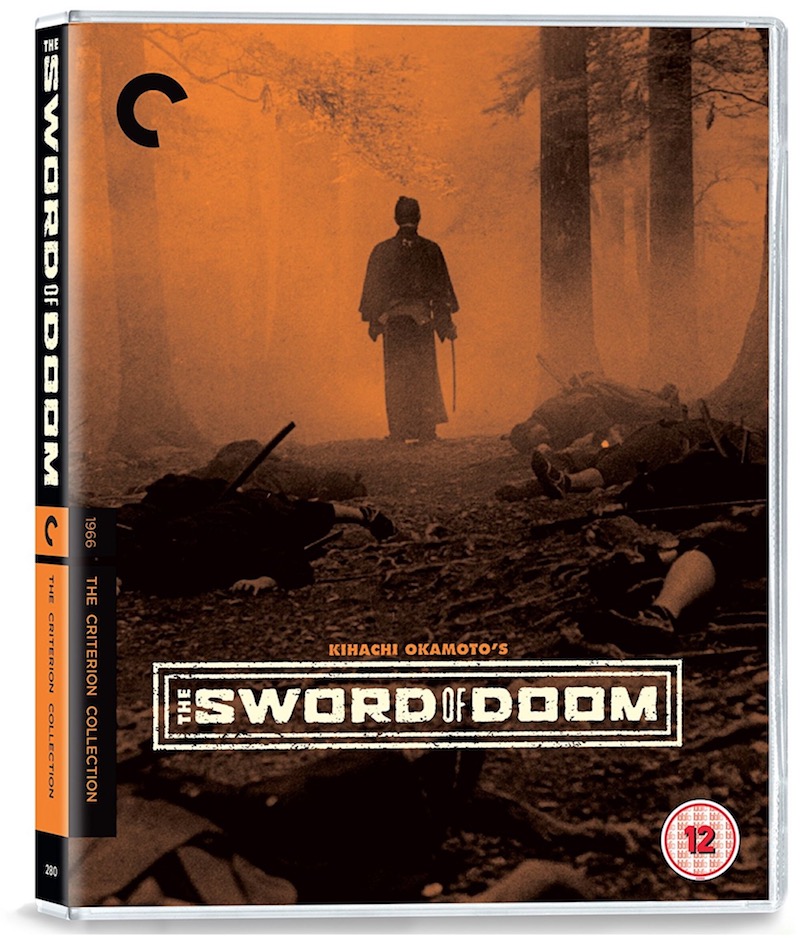