The climax of Star Trek: Discovery’s extensive foray into the Mirror Universe ended on an explosive high, with levels of action and nail-biting drama the series hasn’t handled this well since Deep Space Nine’s day. It’s remarkable what modern TV budgets can achieve, as there was a cinematic grandeur to many of the spacecraft sequences and fight/gunplay choreography. This made “What’s Past is Prologue” the kind of episode you lean forward in your seat to watch, often with a big grin plastered across your face. Was it anything more than just a very exciting and visually beautiful hour of sci-fi action? That’s debatable, but as far as action-orientated hours of Trek go, this was a treat.

While there’s often something to dig into on a cerebral level in Star Trek, “What’s Past is Prologue” was more interested in telling a thrilling action-packed story than ruminating on anything deeper, where the goodies triumphed despite all the odds, the baddie got his comeuppance, and one nefarious character seems to have been offered an unexpected chance of redemption. 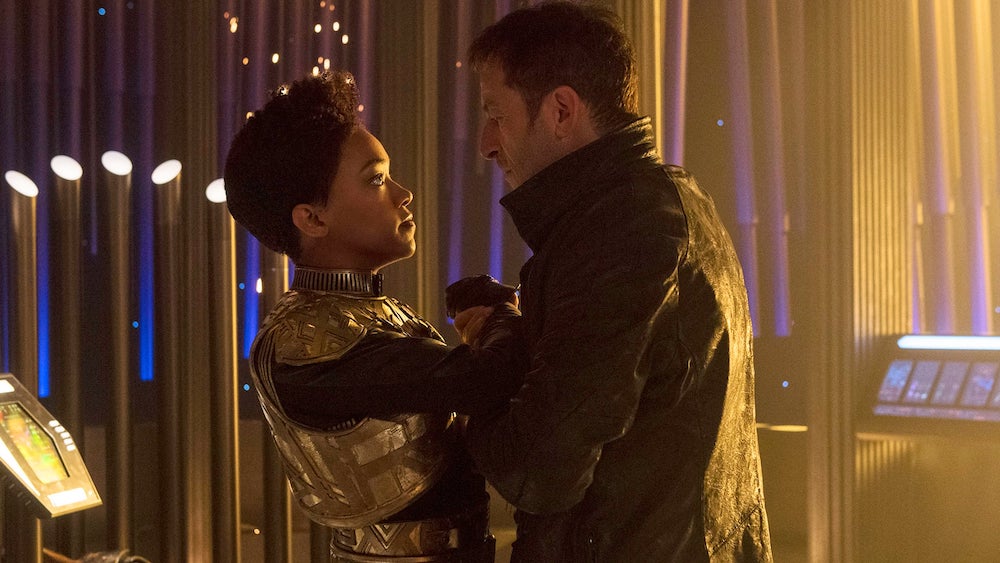 After last week’s reveal that Captain Lorca (Jason Isaacs) was from the Mirror Universe all along, who’s spent a year manipulating events in order to return to his own dimension to defeat Emperor Georgiou (Michelle Yeoh), this hour was a ship-wide battle around the ISS Charon between two opposing forces. Lorca and his followers quickly swelled their ranks by releasing prisoners from the Charon’s brig — including the Mirror counterpart to Security Officer Ellen Landry (Rekha Sharma), who died earlier in the season — and started a hostile cou. Burnham (Sonequa Martin-Green) was suddenly caught in the middle, but chose to side with Georgiou because Lorca’s treachery is more personal for her, and because on some level she can’t accept there isn’t some goodness buried deep inside this twisted version of her kindly mentor.

Elsewhere, the USS Discovery’s crew had to find a way to rescue Burnham from the Charon, rocked by news their Captain was an evil imposter, and Stamets (Anthony Rapp) and Tilly (Mary Wiseman) had to quickly find a way to repair the mycelial network to enable the ship to spore-jump back to their own universe. Or else, the whole network would collapse and they’d find themselves stranded. 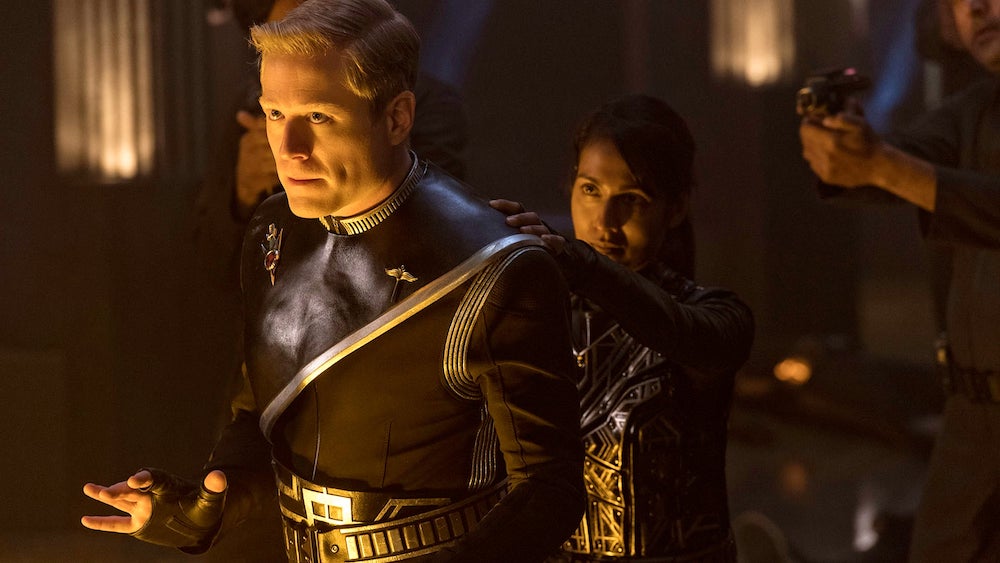 There really wasn’t much to this episode on a narrative level, but it was enjoyable and tense in all the right places, with a real sense of rhythm and purpose about it. Having Burnham and Georgiou work together to take down Lorca, was a great deal of fun. It helped that Isaacs was clearly relishing the chance to be so mean and physical.

There was one standout sequence where Lorca and Georgiou’s followers exchanged phaser fire down a darkened hallway (tricked out with invisible shields and wall-mounted weapons), that was a symphony of aural goodness. Star Trek has always had memorable sound design (some of which are so iconic they haven’t been updated since the 1960s), and the echoey pops and bleeps of everyone’s weapons being fired was absolutely incredible. Turn your speakers up. 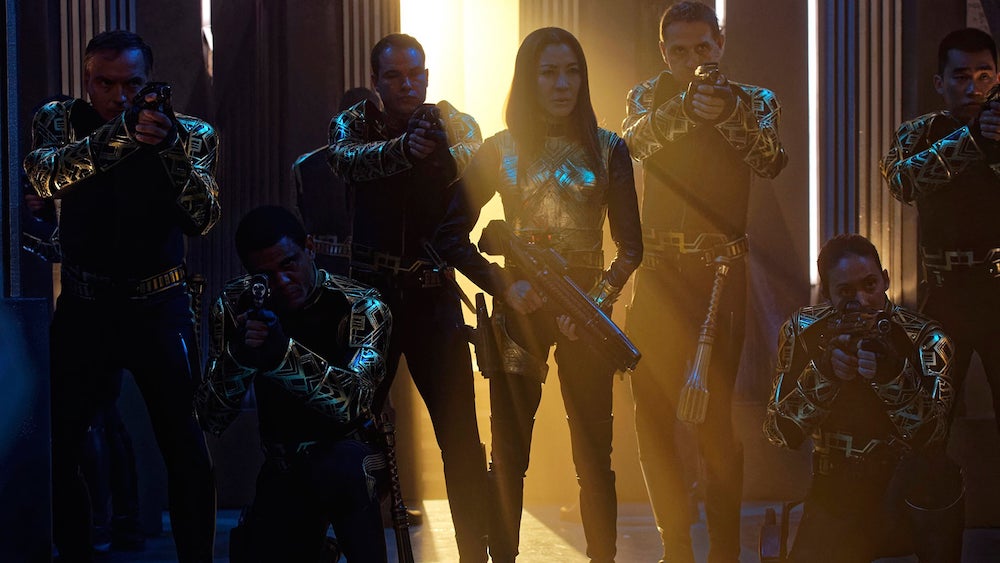 The twist with Lorca being the enemy in their midst has certainly given the season a big kick, not least because this episode ends Jason Isaac’s time on the show quite definitively. Defeated by wily Georgiou and Burnham, Lorca was stabbed through the heart and pushed into the mycelial network’s energy drive, where he disintegrated before our eyes. Of course, this being Star Trek, we’ve already seen actors can be brought back to reprise their roles in some manner. Shouldn’t there be a good version of Lorca in the Mirror Universe, for instance? Might he find his way to our universe one day?

It’s interesting to reflect on the craziness of Lorca’s masterplan now. Having found himself in our universe after a transporter accident in Terran space, he spent a year trying to get back home with Burnham in tow because she was his lover in the Mirror Universe. As Burnham pointedly explained to him at gunpoint, Starfleet would have helped him get back to his own dimension if he’d come clean from the start. It’s a fair point, too. I can only assume Lorca wanted Burnham to accompany him home, specifically, and thought her treasonous actions at the Battle of the Binary Stars proved there’s a bit of “Terran mentality” in our version. It hangs together well enough for me to accept where things went, and on some level it always did seem unlikely Isaacs would have signed up to a multi-year contract with a Star Trek TV series. He’s also a regular on Netflix’s The OA, and I’m sure he has other irons in the fire… 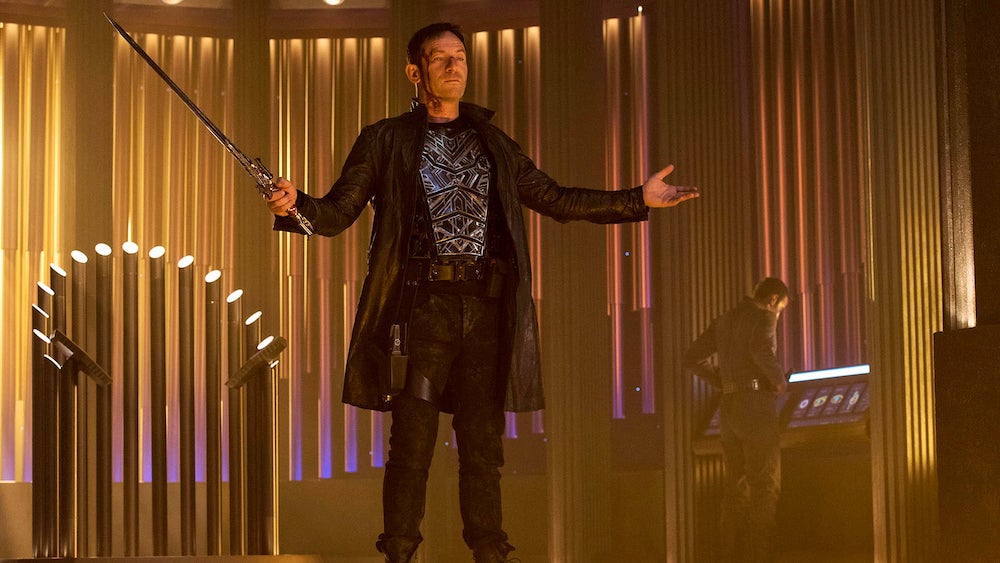 One thing “What’s Past is Prologue” didn’t manage too well is making me feel there’s a sexual longing for Burnham from Lorca, as the depth of his feelings for her never rose to the surface enough. That’s more a fault of the season’s arc across many episodes, because beyond the early instalments when Lorca was holding out an olive branch to Burnham (who was on her way to a Starfleet prison), I don’t recall many moments when Lorca seemed to show he had a special place in his heart for Burnham. But it’s possible I’m forgetting subtle things, so perhaps a rewatch of season 1 will reveal a subtext I completely missed first time around.

What was surprising about this episode is how is ended the Mirror Universe in an ambitious manner resembling a season finale, and yet the denouement has created arguably bigger problems. The Discovery made it back through the repairing mycelial network thanks to Stamets, only to arrive back in the Alpha Quadrant nine months after they left. Not sure how time-travel became part of the mycelial network’s bag of tricks, but let’s go with it. 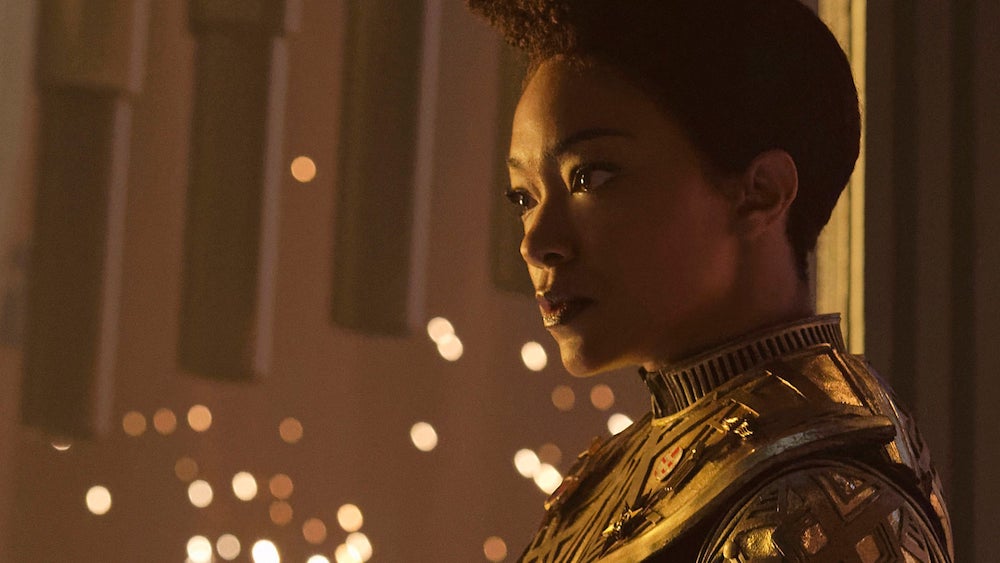 The Federation must have presumed the Discovery perished with all hands, but Starfleet aren’t answering their comms because the Klingon Empire has apparently won the war. For one brief second I thought the show was going to do something even braver and have Discovery appear a hundred years into the future, bringing these characters into The Next Generation era, but this could also be interesting. It seems the Discovery was the ship that stood between success and failure in the conflict, so its absence meant things haven’t gone as expected. Will they find a way to travel back in time to set things right?

And will Georgiou, who was unwillingly transported to Discovery during her final stand, come in useful as a military tactician who once ruled her own Empire? That other big development is also worthy of discussion, because while it’s understandable Burnham has feelings towards Georgiou and they worked together to defeat Lorca, she’s not exactly a nice person. She’s a fascist leader with a fondness for Kelpien soup.

Do you really want her in the Prime Universe, with her foul attitude that flies in the face of the Federation’s teachings? It’s like taking a liking to Adolf Hitler because you briefly shared a common enemy and he looks like you dad, but that doesn’t means it’s acceptable to take him home to meet your parents. Maybe the show will rehabilitate Georgiou’s character, but I doubt Michelle Yeoh is going to be sticking around for much longer, so don’t be surprised if she sees the error of her ways during a noble sacrifice…