Ricky Gervais has been walking his own path since Life’s Too Short flopped in 2011 (his last collaboration with Stephen Merchant), but his first solo effort was 2012’s unremarkable sitcom Derek—which wasn’t well-received by British critics, yet found unexpected success as a ‘Netflix Original Series’ in the US. And it’s with Netflix that the comedian’s next project has found a home: Special Correspondents (a remake of 2009 French comedy Envoyés Très Spéciaux), which the streaming giant spent $12 million acquiring the global distribution right to.

The thing with Netflix-affiliated movies, so far, is how most of them have the flavour of being unfit for cinema— with the exception of Beasts of No Nation, which was critically lauded, although still ignored during its limited theatrical run. I’m talking more about Adam Sandler’s four-picture deal that began with The Ridiculous Six (a woeful stinker Netflix should be ashamed of unleashing), and the middling fun of Pee-Wee’s Big Holiday (presumably made because a Netflix algorithm saw a spike with Pee-Wee’s Playhouse one wet weekend).

Considering the esteem in which Netflix-made television shows are held, it’s fascinating how they can’t seem to apply that development skill to bigger budget movies. Mind you, the majority of Netflix’s shows are actually pretty bad, there’s just so many of them that you overlook that. So maybe the problem is that even deep-pocketed Netflix can’t saturate their service with expensive films, if a high percentage are going to receive negative courage? 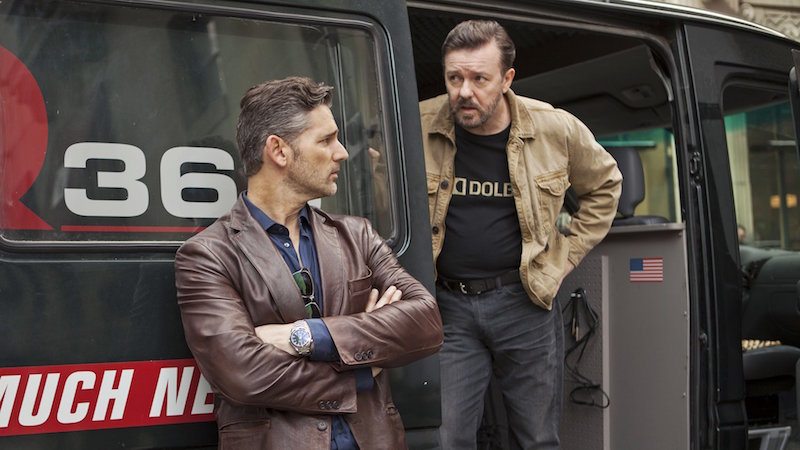 Anyway, to the movie itself…

Frank has the brass neck to con his way into sensitive situations, in order to get the gist of a breaking story he then embellishes live on-air. Ian? Oh, he collects Marvel toys. Although in time honoured writer’s prerogative, Gervais ensures he’s also married to the beautiful Eleanor Finch (Vera Farmiga)—a woman soon exposed as a shrewish cow who bemoans Ian’s underachieving. How did those two ever get together? I doubt a plausible back-story exists.

Things are complicated when Eleanor sleeps with handsome Frank at a party (who’s unaware he’s banged his colleague’s spouse), the night before Frank enlists Ian’s help in flying to Ecuador to report on a brewing civil war. Unfortunately, Ian loses their passports and they’re both stranded at the airport with their boss expecting a war zone dispatch very soon, which leads them to falsifying news reports using ambient noise and sound effects. 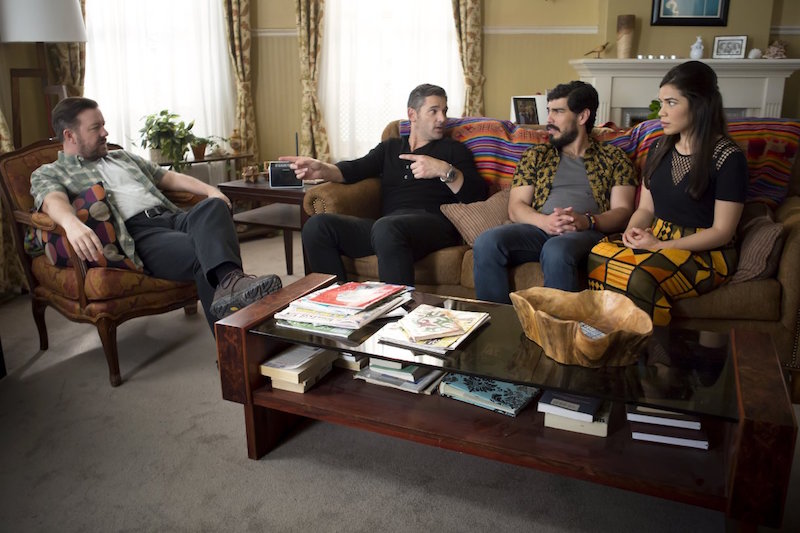 There’s the skeleton of a funny film here—perhaps the French original was hilarious, although its 5.3 rating on IMDb suggests not—but Special Correspondents is a lazy piece of filmmaking. There are even a few meta references to its low budget, as if Gervais can’t help apologising for the fact he’s unable to deliver the kind of thing you’d expect from the multiplex. Thing is, comedy is one of the best genres for overcoming a low budget, as so much relies on the writing and performances, so there’s no excuse for the astonishingly low rate of laughs and narrative inventiveness.

The best part of Special Correspondents is the early setup, and perhaps the first few occasions Frank and Ian phone-in their reports and realise they’re becoming famous in the process. The decision to escalate matters was inevitable (you can’t have the entire film based around two people making radio broadcasts above a shop), but when Frank and Ian decide to fake their own kidnapping it marks a downward slide the film never recovers from.

It’s just nowhere near as funny or as intelligent as it really needed to be; completely missing chances to land some satirical jabs at the media’s obsession with war and twisting of the truth. Tellingly, the film’s best ongoing joke is about fame-hungry Eleanor using her husband’s kidnapping to launch a singing career—by writing and performing a song designed to raise money for his ransom on a chat show. Farmiga has quickly become one of my favourite actresses working today (she’s fabulous on Bates Motel), and at the very least I hope someone takes notice of the gold she spins from this straw and puts her in a comedy that’s actually funny on the page. 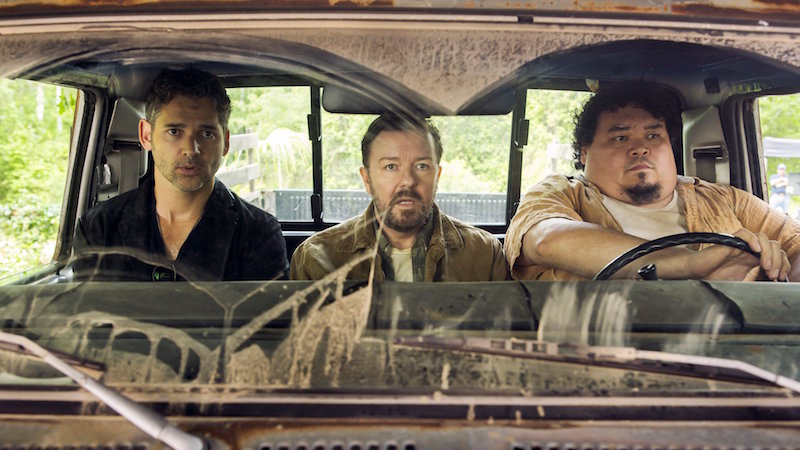 The blame for everything wrong is squarely on Gervais’s shoulders as writer-director-star. He seems to lack depth and subtlety without Stephen Merchant’s influence (which doesn’t bode well for this summer’s return of David Brent), and too much about this script falls apart as a consequence. Gervais halfheartedly goes with the idea Ian’s a comic-book geek, but it never rings true and he’s frankly not very good at playing underdogs (another reason I hated Derek). Eric Bana’s serviceable as Frank, but has zero comic chemistry with Gervais, so their pairing never creates any belly laughs. But it’s the script itself that just needed more rewrites, because it’s a mess that feels cobbled together from a collection of notes.

Kelly Macdonald has a thankless role that only exists to ensure a shoehorned in ‘happily ever after’ with Ian at the end, which is so unearned I was convinced I’d missed a chunk of the film. Did Macdonald and Gervais even have more than two scenes together? You can’t suddenly turn them into the perfect couple, destined to be together!

And it’s a problem that every non-white character is either a terrorist, criminal, or complete idiot who speaks pidgin English.

While it’s true you can’t help watching Netflix movies with a different mindset—I didn’t spend money, or exert much effort ‘going to see it’—convenience can’t excuse its faults. It’s fair to judge Special Correspondents as you would any other comedy, and it’s a wasted idea that doesn’t deliver any notable laughs, drama, or insight.