Spanish writer and illustrator Victor Santos created the character of hitman Duncan Vizla for his 2009 comic-book Black Kaiser, who later appeared in a successful 2012 webcomic picked up by Dark Horse Comics and compiled as Polar: Came From the Cold the following year. Volumes of the Black Kaiser’s adventures are still being published today, and now a movie adaptation’s been co-produced by Dark Horse and Constantin Film for distribution on Netflix. Written on spec by fan Jayson Rothwell, Swedish music video director Jonas Åkerlund was hired to bring the inked imagery to life, for an adaptation that eschewed the comic’s limited dialogue and colours.

There’s a subgenre of action cinema where “the world’s greatest assassin” comes out of retirement for one last job, or becomes prey to his fellow employees. The John Wick movies are the most successful and recent examples, which Polar winks at with a scene where Duncan “The Black Kaiser” Vizla (Mads Mikkelsen) accidentally shoots his own dog dead and buries it outside. Here, Duncan is 14 days away from mandatory retirement as the top assassin for an organisation called Damocles, being given a medical and prostate examination now he’s turned 50. Unfortunately, his flamboyant employer Mr Blut (Matt Lucas) has hatched a plan to return millions of dollars to Damocles by killing his retired hitmen and denying them the small fortunes they’ve earned over their careers. We open on one such hit in Chile, led by femme fatale Vivian (Vikings’ Katheryn Winnick) and a team that includes honeytrap Sindy (Ruby O. Fee), and soon their attention turns to Damocles’s best killer: the deadly Black Kaiser. But he’s obviously not going to go down without a long, violent, bloodthirsty fight. 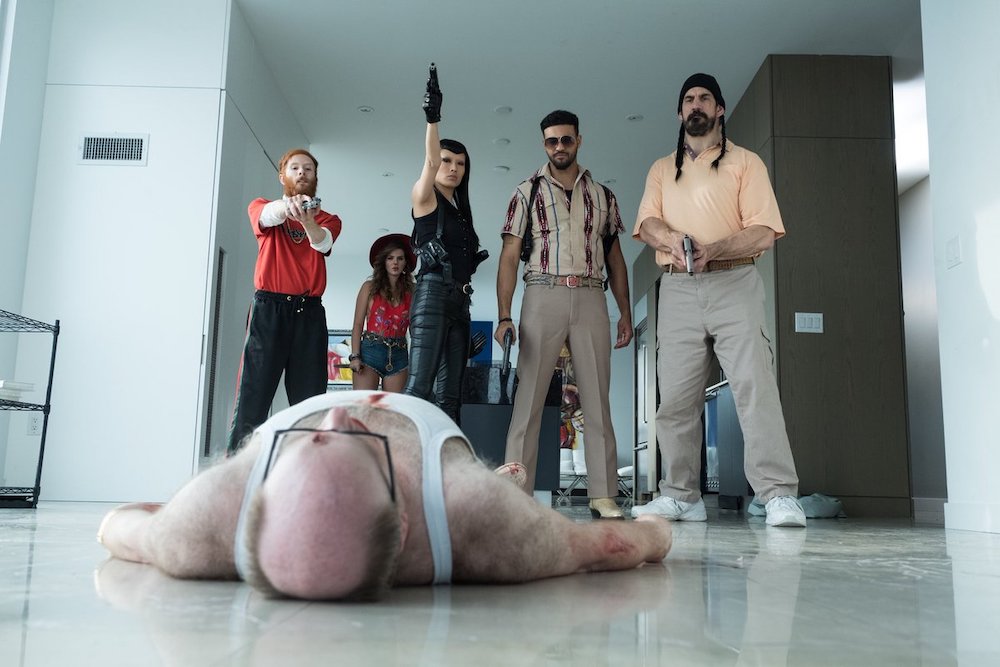 The problem is exacerbated by the fact Åkerlund seems to have little interest in anything outside of the action set-pieces and sequences where he can show blood spray. In fairness, he doesn’t really have much else to play with over a protracted 119-minutes that struggle to spread material that barely justifies 80. And that’s a shame because Mads Mikkelsen is at the heart of this movie’s marketing, but even his brooding intensity and wearing the best ‘tache this side of Mission: Impossible—Fallout (2018) can’t salvage things. Although Polar would’ve been impossible to watch without Mikkelsen’s innate charisma and physicality, doing what he can to make a ‘grizzled killing machine’ cliche interesting.

Unavoidably, there’s a strong European flavour to the design and fashions, which is justified given the Spanish source material. Constantin Film is a German production company and, while Polar filmed on location around snowy Canada, Åkerlund brings a colourful vibrancy and grim campness to proceedings. This is most evident with his decision to cast comedian Matt Lucas (who starred in Åkerlund’s Small Apartments) as an English villain who wears primary-coloured suits, has a shock of blonde hair, and a port-wine birthmark on his face. It’s an odd casting choice, more so if you’ve grown up watching Lucas’s TV comedy work, but the incongruity speaks to the general weirdness of Polar and its intention to be extravagantly ludicrous pop art. 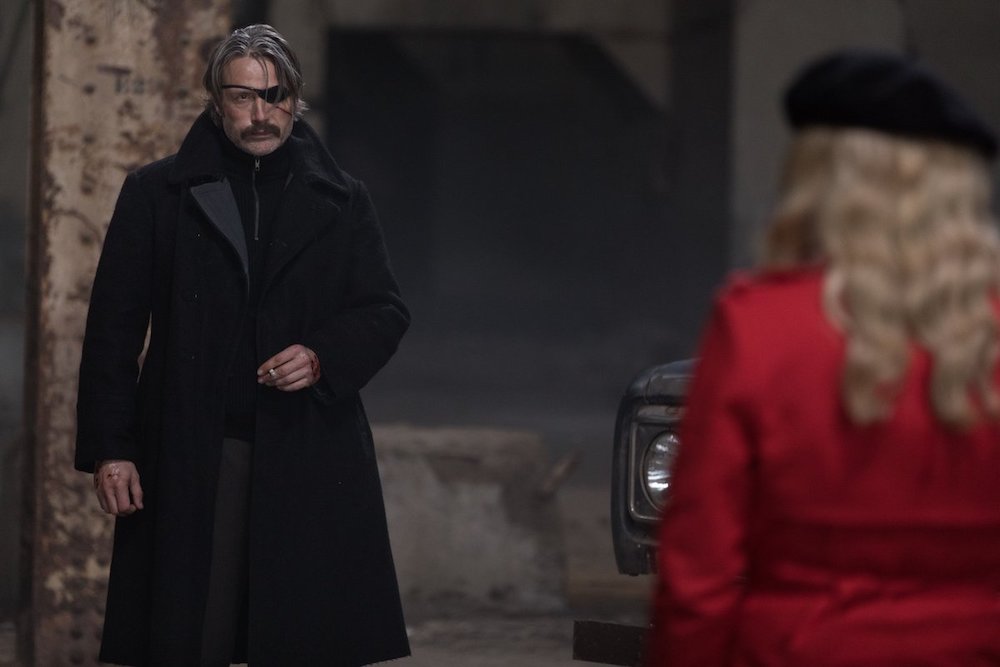 Åkerlund only really achieves a good balance on occasion with a few decent set-pieces (one where a naked Duncan turns the tables on home invaders, another where he’s using dead bodies to shield himself from gunfire while making his way down a corridor filled with guards), but it’s clear his background is with short-form music videos. Polar is stylish and every shot has a snap to it, but it’s also superficial and things don’t flow so well across the runtime. It’s like a collection of moments and nutty ideas, all swirling around trying to distract one’s attention from the fact the story is failing as a two-hour experience.

However, however unintentionally, Polar did manage to surprise me towards the end because I’d started to underestimate it too much. Duncan’s younger neighbour, Camille (Vanessa Hudgens), appears to be little more than a love-interest or damsel-in-distress type, but her personal subplot does manage to pivot around and end on a graceful note. It helps that Hudgens is doing surprisingly good work here, emoting well and ensuring her scenes are better than the film she’s in. The times when Polar feels like it has something going on beneath the glossy surface all involve her and Mikkelsen together on screen, which is a frustratingly infrequent occurrence. 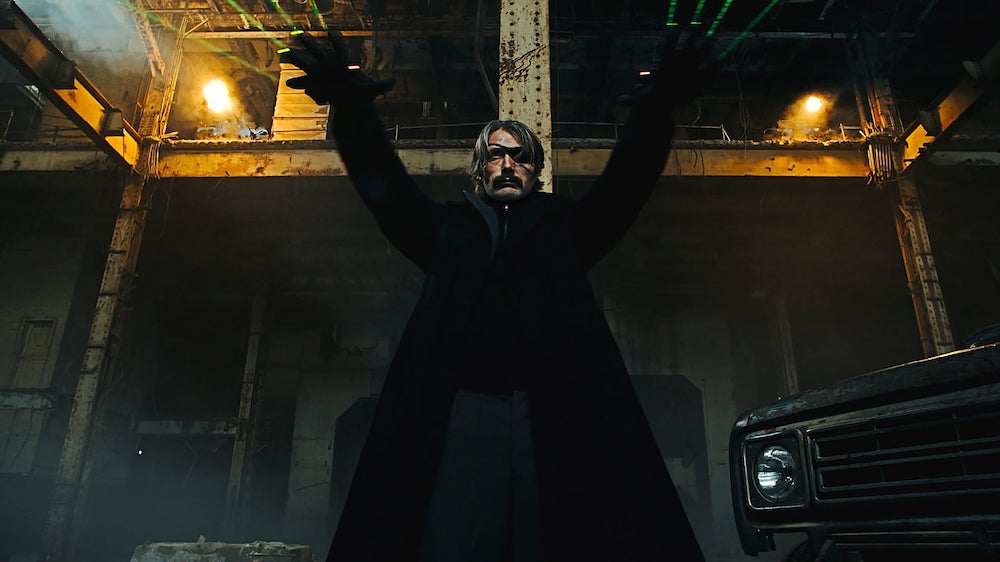 Ultimately, Polar’s biggest failure is that it wallows in the gore and violence that should have been just one component. It feels like the filmmakers are giddy with excitement over getting to show a man being nail-gunned to a wall by his wrists and genitals, or have a group of assassins blow an obese man apart with gunfire, or have close-ups of knives tearing into flesh during a torture scene. But when pretty much every other scene is doing this, to varying degrees, the cumulative effect just becomes tedium.

While not without instances of memorable action (like a devastating takedown of a warehouse of armed men with a remotely-operated arsenal of machine guns), Polar is essentially too one-note and longwinded. It wastes the chance to launch a Netflix-exclusive franchise of grim comic-book action movies because there isn’t much to emotionally engage with or keep one’s interest if nonstop violence and sadism isn’t your idea of fun. And even if it is, there’s an underlying stupidity and repetitiveness to Polar which means it’s difficult to champion. Still, it’s big and gruesome enough to attract its target audience… of horny 13-year-old boys.