A photojournalist and a war correspondent find their personal and professional ethics tested in the Nicaraguan revolution of 1979.

1979. Nicaragua’s 50-year-long revolution is reaching its climax as the rebels gain territory, getting closer to the capital Managua… and photojournalist Russell (Nick Nolte), war correspondent Claire (Joanna Cassidy), and special correspondent Alex (Gene Hackman) have arrived in the country chasing their next big story. Alex and Claire are on-again-off-again lovers, but it’s Russell and Claire who find themselves growing closer as they pursue the seemingly impossible assignment of finding, photographing, and interviewing the legendary leader of the rebels.

Under Fire succeeds brilliantly in portraying the devastation of a country in chaos. The scale never feels restricted and audiences would be forgiven for thinking they’d built a Hollywood production in the middle of a real civil war. It undoubtedly helped that the Nicaraguan revolution had ended only four years before this film’s release. Rubble is strewn across every street, civilians scurry in and out of doorways, gunshots crack through the air, previously habitable hotels are suddenly abandoned, and our journalist heroes are literally caught in the crossfire. 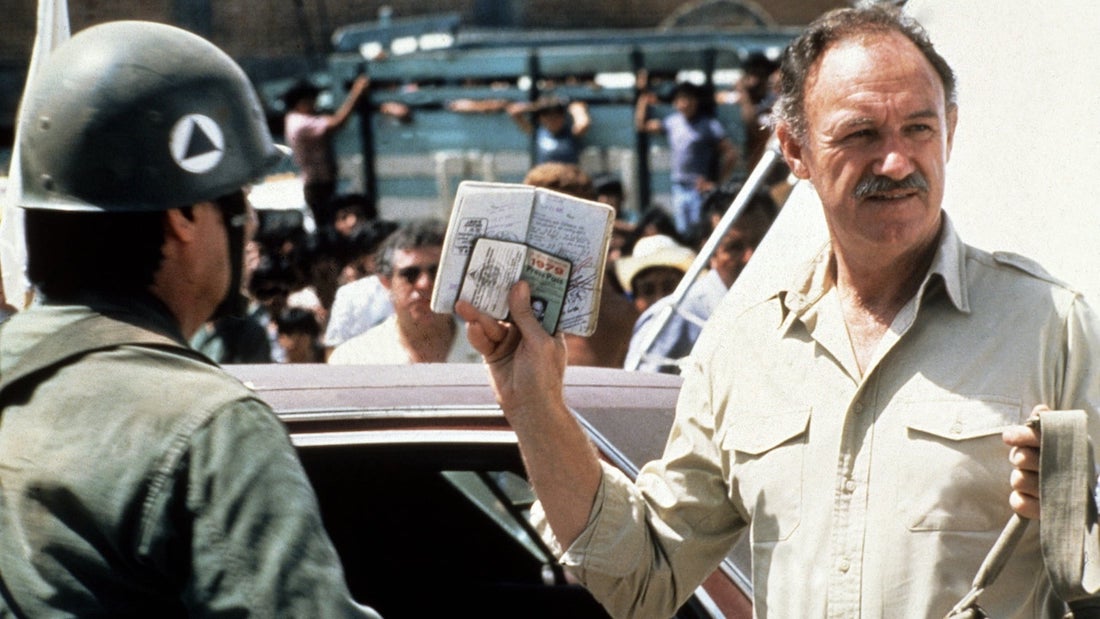 Where Under Fire doesn’t succeed is with the characters and storyline. Nolte, Cassidy, and Hackman are convincing as journalists, each bringing their distinctive personalities to bare, but the problem is that the script makes them almost too realistic and too ordinary. They’re neither washed-up hacks in need of redemption (see: Paul Newman in The Verdict), nor are they nominally-neutral secret heroes who’ve spent too long suppressing their true feelings (see: Humphrey Bogart in Casablanca). Instead, they’re ordinary people of well-adjusted morality and that’s a difficult place for a character to grow and change from… especially when the thrust of all ‘outsiders-arrive-in-a-largely-ignored-warzone’ stories is how affected they are by the conflict. 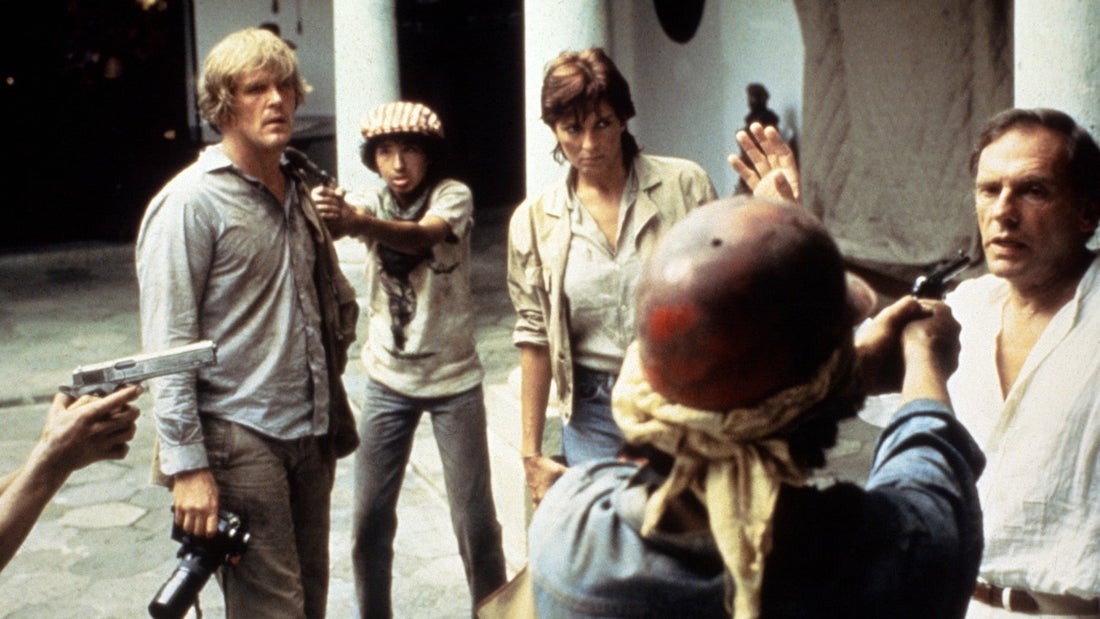 It doesn’t help that the film also lacks a plot focus. What is the core? Is it the love triangle between the three journalists? Is it the search for the mysterious and unseen leader of the revolution? Is it the morally dubious decision they make at the halfway mark? The film throws a plethora of plots at the screen but never settles on one, which results in all of them feeling unimportant. Perhaps the idea was to demonstrate the confusion of conflict, but the film is too clear about who the good guys and who the bad guys are for that point to ever land. Under Fire feels worthy in the wrong ways, like it thinks it’s making an interesting and important point by saying that, guess what, dictatorships are bad.

Where Under Fire succeeds is with the supporting characters. Ed Harris plays Oates, a mercenary whose gun-for-hire morality Russell had previously ignored because the people in his lens and in Oates’s sights were unknown and distant. Then there’s Marcel (Jean-Louis Trintignant), a businessman-come-spy who talks too much, and who the dictator-president Samoza has tasked with identifying his mistress’s other lover (can you guess who it is?). With these characters, the film personifies the grubby corruption and fluid morality of the conflict. They’re not realistic (they’re shamelessly symbolic), but it’s in their scenes that the story comes to life. It’s telling that the most powerful and emotionally devastating line is given to an unnamed nurse who administers an ice-cold dose of reality to Claire in the final minutes. Also telling is the fact that Jerry Goldsmith’s excellent score plays best over realistic montages of the conflict and not over supposedly emotional character moments. 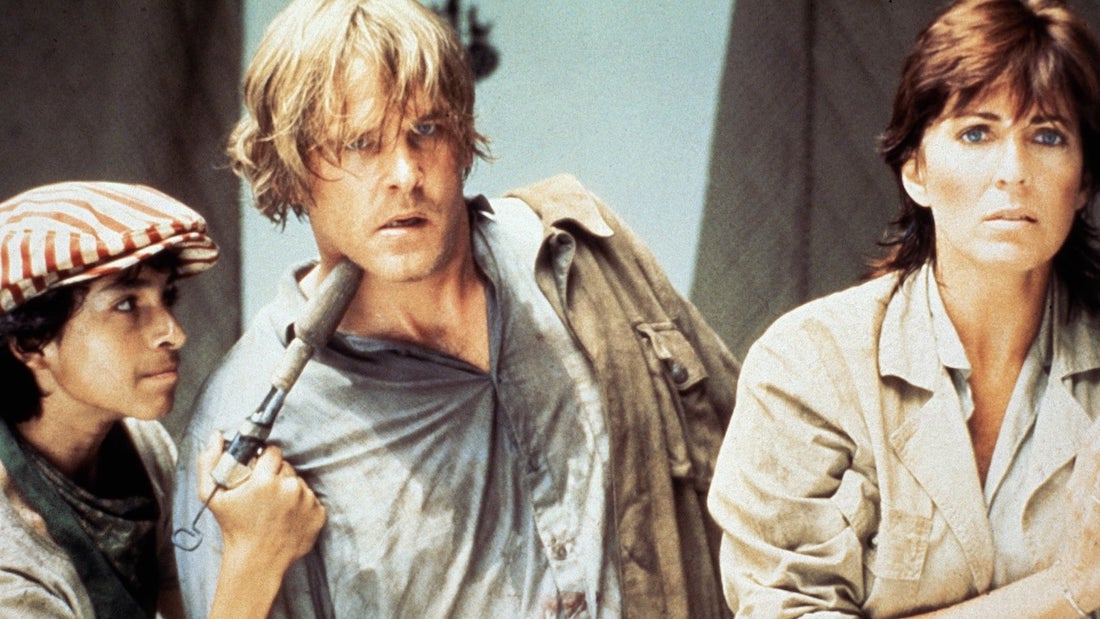 Perhaps all of Under Fire’s problems stem from the fact that this was a very recent conflict at the time. And how the film’s major plot development is inspired by a very real and very tragic event. The film is afraid of trivialising important recent history by injecting too much fiction into everything, but the film is fiction and is, therefore, running scared of itself.

No distant-war set movie with a central love-triangle can avoid comparisons to Casablanca (1942). It could obviously be considered unfair to compare any movie to one of the greatest ever made, but we shouldn’t forget that Casablanca was released during the same conflict it depicted with an elegance lacking here. Where Casablanca was brave, Under Fire is timid, and thus ineffectual. 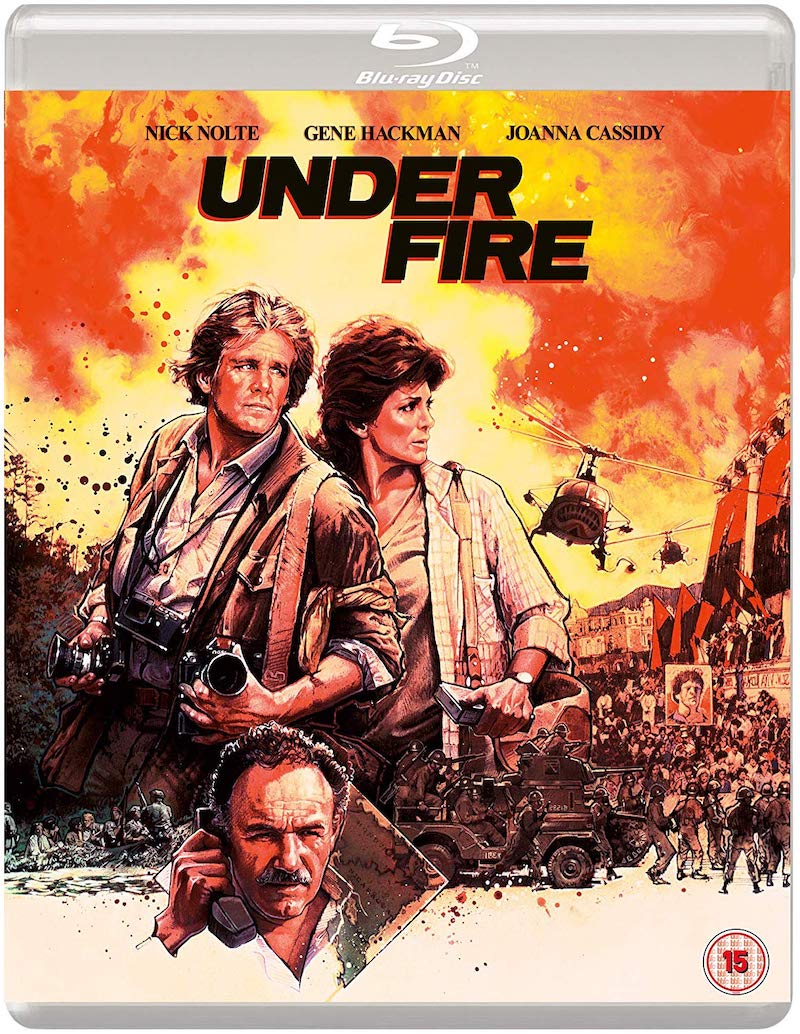 This new Blu-ray release from Eureka Classics contains a great quality print and audio mix. The extras on the disc include two commentary tracks full of “great” stories that could be used to treat insomnia. Also included is a featurette called “Joanna Cassidy Remembers Under Fire”, although she clearly doesn’t remember much as it’s only three minutes long. As with all Eureka releases, the real bonus is the booklet which contains viewing notes and other writing on the film, helpfully contextualising it in the real history of the revolution.

Written By
Tom Trott
More from Tom Trott
A struggling actress trying to escape her life as a call girl...
Read More