King Arthur and his Knights of the Round Table embark on a surreal search for the Holy Grail, encountering many silly people and obstacles.

Originally broadcast on the BBC between 1969-1974, Monty Python’s Flying Circus was written and performed by its six members: Graham Chapman, John Cleese, Eric Idle, Terry Jones, Michael Palin, and Terry Gilliam. As a free-roaming sketch show loosely held together by Gilliam’s iconic animations, it pushed the boundaries of what comedy could be.

Producing 45 episodes over five years, the Pythons targeted the peculiarities of British life, organised religion, and politics—placing them in absurd situations laden with risqué humour. They steered away from the bawdy humour popular in The Benny Hill Show (1955-1989) or best exemplified by the sight of Barbara Windsor’s bra pinging off in Carry On Camping (1969). The Pythons pioneered and revolutionised British comedy, giving it intellectual silliness, and their influence crossed oceans and made them global stars. 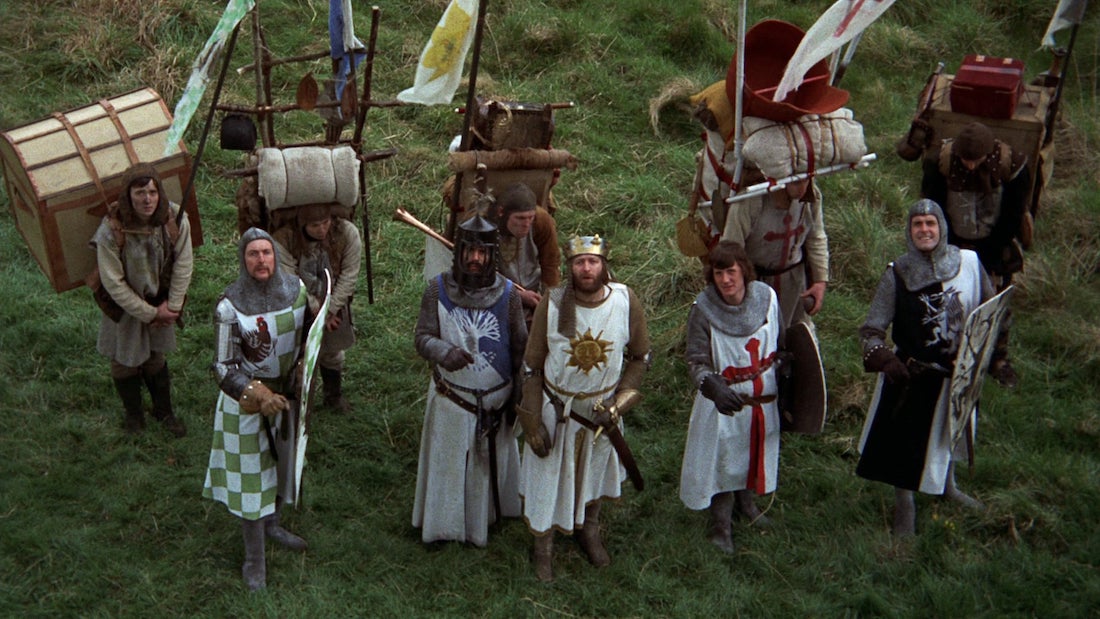 Monty Python and the Holy Grail represented a chance for the Pythons to reunite after Flying Circus had come to an end. John Cleese was yet to find huge success with Fawlty Towers (1975-79), and Michael Palin’s hadn’t yet made Ripping Yarns (1976). Their individual work in the early-’70s wasn’t as memorable as their Python output had been, so the gang came together to make a spoof movie of the Arthurian legend. And they felt creatively rejuvenated after years apart, helped by the return of John Cleese—who hadn’t been part of the final series of Flying Circus because he felt they’d started to repeat themselves.

In 963 AD, King Arthur (Chapman) and his squire Patsy (Gilliam) travel across Britain searching for the bravest men to join their Knights of the Round Table. After recruiting Sir Bedevere (Jones), Sir Lancelot (Cleese), and Sir Galahad (Palin), amongst others, Arthur leads his trusted knights to Camelot. On their way, God speaks to them and gives Arthur the task of finding the Holy Grail, and as they search for clues the knights encounter a variety of obstacles and enemies including rude Frenchmen, a relentless Black Knight who feels no pain, and a lethal rabbit with “big pointy teeth.” 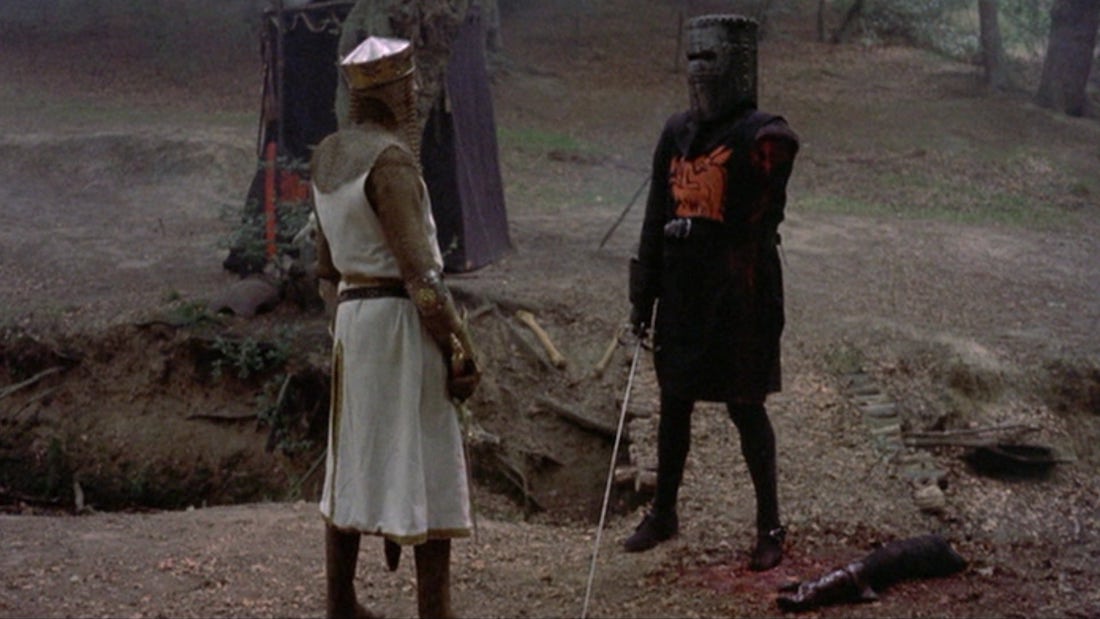 All of the Pythons are fantastic in multiple roles. My favourite is the wonderful John Cleese. You won’t catch him doing his famous silly walks, but his range is more evident in the many characters he plays: from the noble Sir Lancelot needlessly butchering the inhabitants of a castle before offering a deadpan “sorry”, to eccentric Scottish pyromaniac Tim the Enchanter, his performances are excellent and prove he’s one of Britain’s great comic talents.

Another highlight is the late Graham Chapman as straight-faced Arthur. Unafraid to delve into the absurd, he delivers his lines with perfect comic timing. Chapman actually caused problems behind the scenes as they made the film. Having befriended The Who‘s drummer Keith Moon, who was a bad influence, his addiction to alcohol caused Chapman to forget his lines and often keel over. Although his excellent performance suggests the opposite, Chapman was inebriated throughout most of the shoot, and yet he managed to portray King Arthur as a poised and bonkers royal doing insane things like questioning a troll about the airspeed velocity of a swallow. 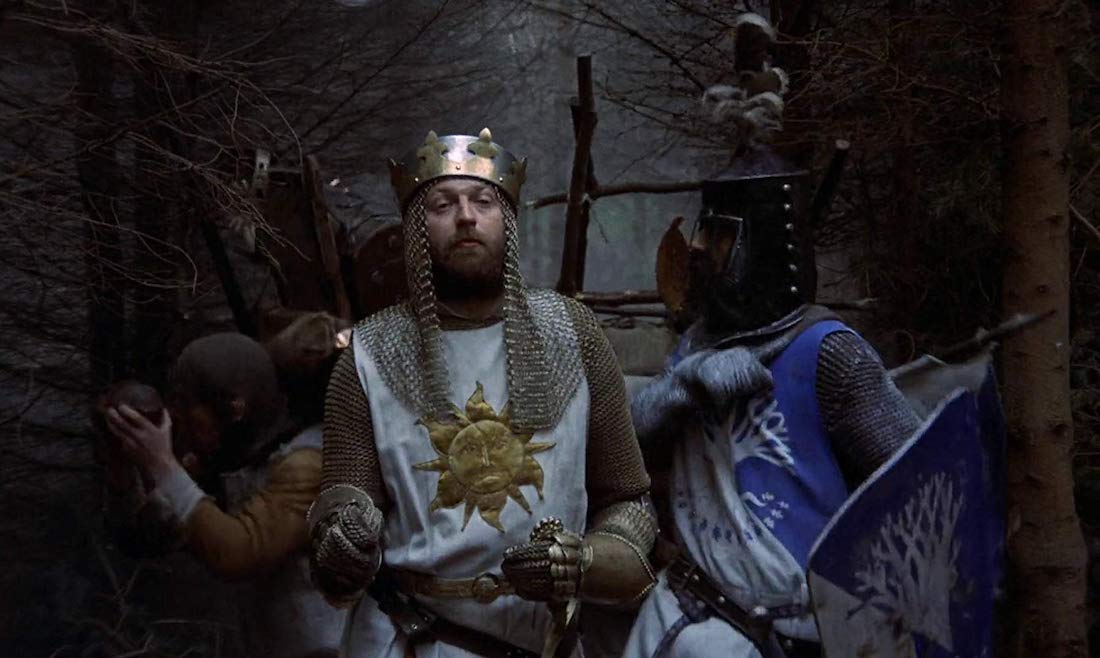 The Holy Grail features the same kind of brilliant comic writing that characterised the best episodes of the TV series. Everything from scientific observations to religious doctrine is poked fun at. It’s understandable if the absurd humour isn’t to your taste, however. Before Python, British comedy was grounded and formulaic, making jokes about everyday situations with traditional setups and punchlines. The story of King Arthur and his quest for the Holy Grail is just as ludicrous as the logic that if a woman weighs as much as a duck she’s a witch. Although one could argue the narrative is a string of comedy skits stitched together by crude animations, one can appreciate the hidden depths and intelligence of their approach.

Embracing The Holy Grail is to embrace the absurd and disregard logic. It blends slapstick comedy with cheesy humour and dry wit, making almost no sense at all. Yet it still holds up today. Expressed by George Harrison himself, the Pythons are “The Beatles of comedy.” Sure, a side-quest for a shrubbery may be pointless, the knights may not always be brave, and a killer bunny makes for an unconventional monster… yet they’re all components of a hilarious medieval adventure. I find the best comedy pushes boundaries. Although Holy Grail is a ridiculous comedy, it manages to tackle several controversial issues of the day: homosexuality, Christianity, and class divisions (“Help! I’m being repressed!”) Even the art of filmmaking is tackled as they consistently break the fourth wall, even telling the narrator to “get on with it.” 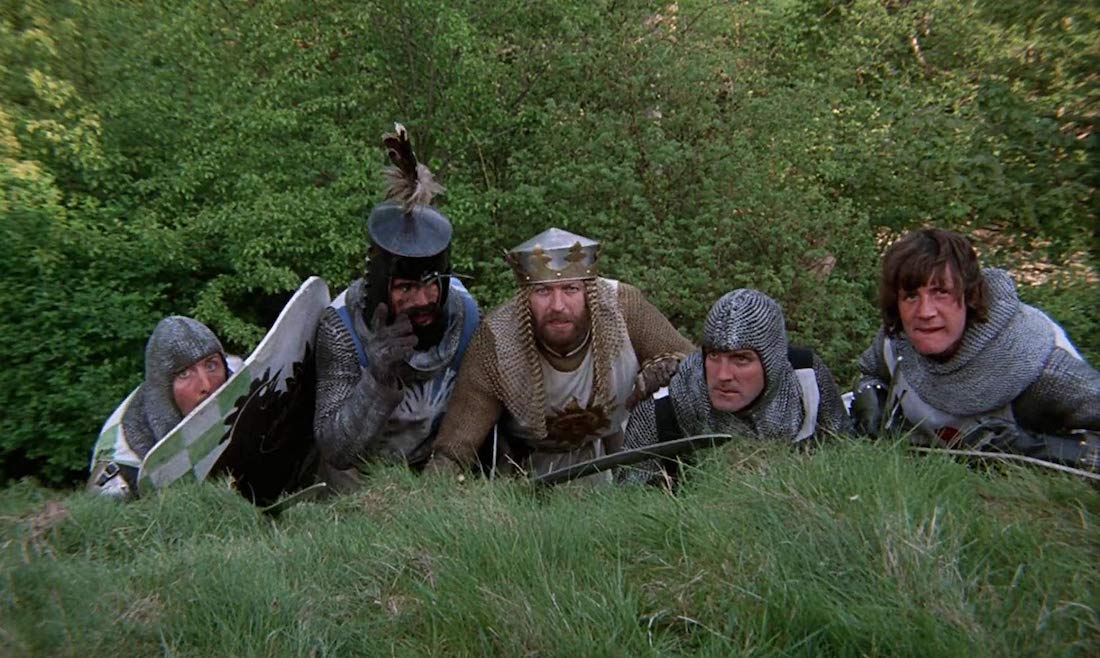 The script is tight from beginning to end and was written with the same rules as the television series: if it’s not funny, it goes. During production, this resulted in half the script being binned simply because it didn’t gel with the narrative. In doing so, every conversation builds to a climax and barely a line goes by that isn’t quotable. The script is a perfect balance between the verbal and the visual, the high-brow and low-brow. It’s the quality of the humour—irreverent, clever, and challenging—that makes The Holy Grail above par. It laid the groundwork for modern British comedians like Noel Fielding of The Mighty Boost and Sacha Baron Cohen with Da Ali G Show. Even across the Atlantic, The Knights Who Say ‘Ni’ has become familiar to a different generation after appearing in an episode of The Simpsons.

Made with a measly £200,000, directors Terry Jones and Terry Gilliam received investments from rock bands such as Led Zeppelin, Pink Floyd, and Genesis. Filmed in the foggy moors of Scotland during the spring of 1974, Gilliam and Jones managed to stretch out every penny: in true Python style, each actor plays several roles, the diffused lighting is often awful, and the crude violence is laughable by today’s standards. However, one can see the directors had a deep passion for this low-budget project. What the production lacked in money, they made up with creative genius. The sound of clapping coconuts replacing unaffordable horses is one of the funniest gags in history. This rough-and-ready approach is now part of Holy Grail’s charm and the reason it works so well. 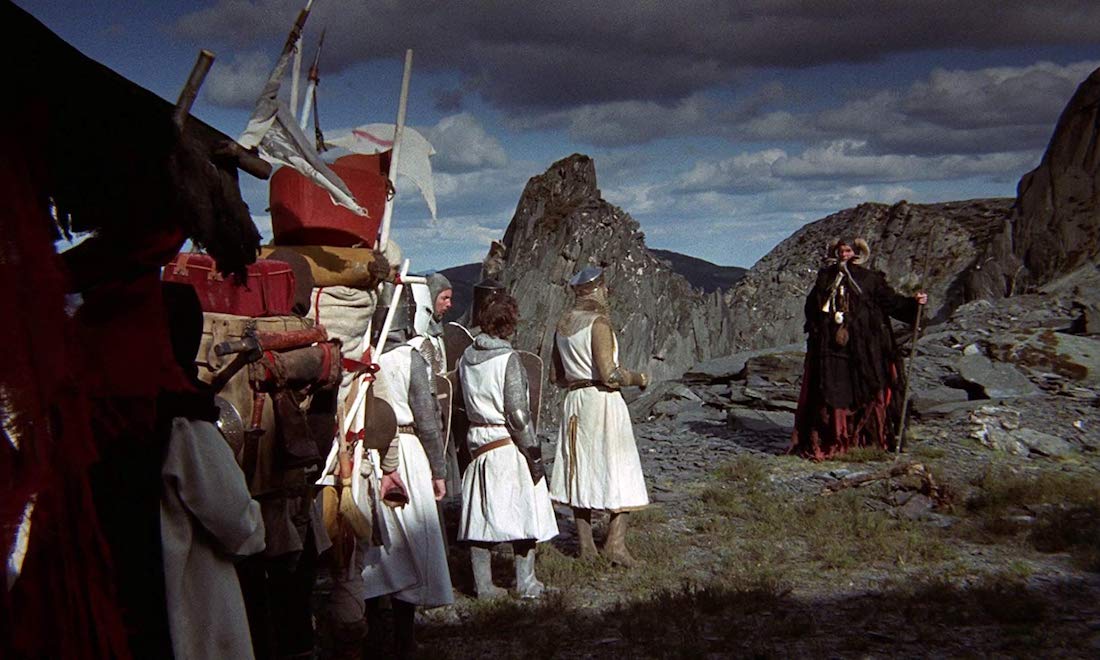 Many of the visually striking set-pieces were created by Terry Gilliam. Despite its tiny budget, Holy Grail is one of the most visually interesting of the Python movies. The use of unusual camera angels to tighten the surreal atmosphere, along with the gritty ‘bring out your dead’ plague scene, is torn straight from Gilliam’s mind. One only has to look at Gilliam’s subsequent solo work that immediately followed, Jabberwocky (1977) and Time Bandits (1981), to see he directs with a specific style. His precision and obsession caused friction on-set with Jones, but the results speak for themselves. The sets and costume designs are unforgettable, too. By emoving Hollywood sensationalism, the clothing is naturally stained and ragged to create a realistic medieval look.

Naturally, Holy Grail contains its fair share of weaknesses. Both Gilliam and Jones have stated that their directorial debut was a learning experience from beginning to end. The shaky camera and rough editing clearly suggest the two friends were making it up as they went along, which results in several scenes outstaying their welcome. During a regrettably sluggish middle section, we follow the knights’ individual story arcs and it sucks the pace out of the film a little. 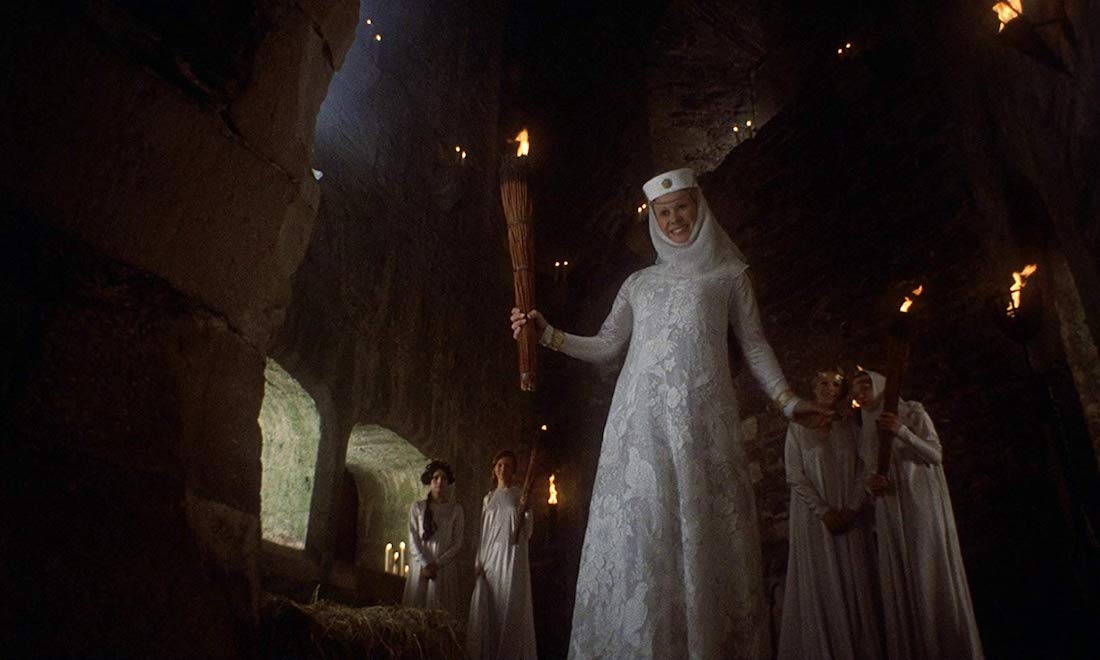 Several rumours have circulated that the film’s shoestring budget resulted in its infamous ‘cop-out’ ending. Allegedly, the original script ended with King Arthur and his knights discovering the Holy Grail in modern-day Harrod’s, a famous department store in London. This idea was abandoned and a slightly better but similar sequence was shot instead, with modern-day cops catching up with King Arthur and putting an end to the adventure. The abruptness of the ending suits the wacky style of Monty Python, but the final sequence is always lost on me.

As a teenager, Monty Python and the Holy Grail was my second introduction to the comedy of Python, following Monty Python’s Life of Brian (1979). There’s always debate about which film is superior and, personally, Holy Grail is my favourite of the two. The first time I saw it I laughed throughout. 15 years later, it still makes me laugh and remains as quotable as ever. I understand madcap Python humour is an acquired taste but, regardless of what type of comedy tickles your funnybone, Holy Grail is sure to elicit at least one big smile. Visually it hasn’t stood the test of time too well, that’s true, but ’tis a silly film that deserves its glistening reputation. 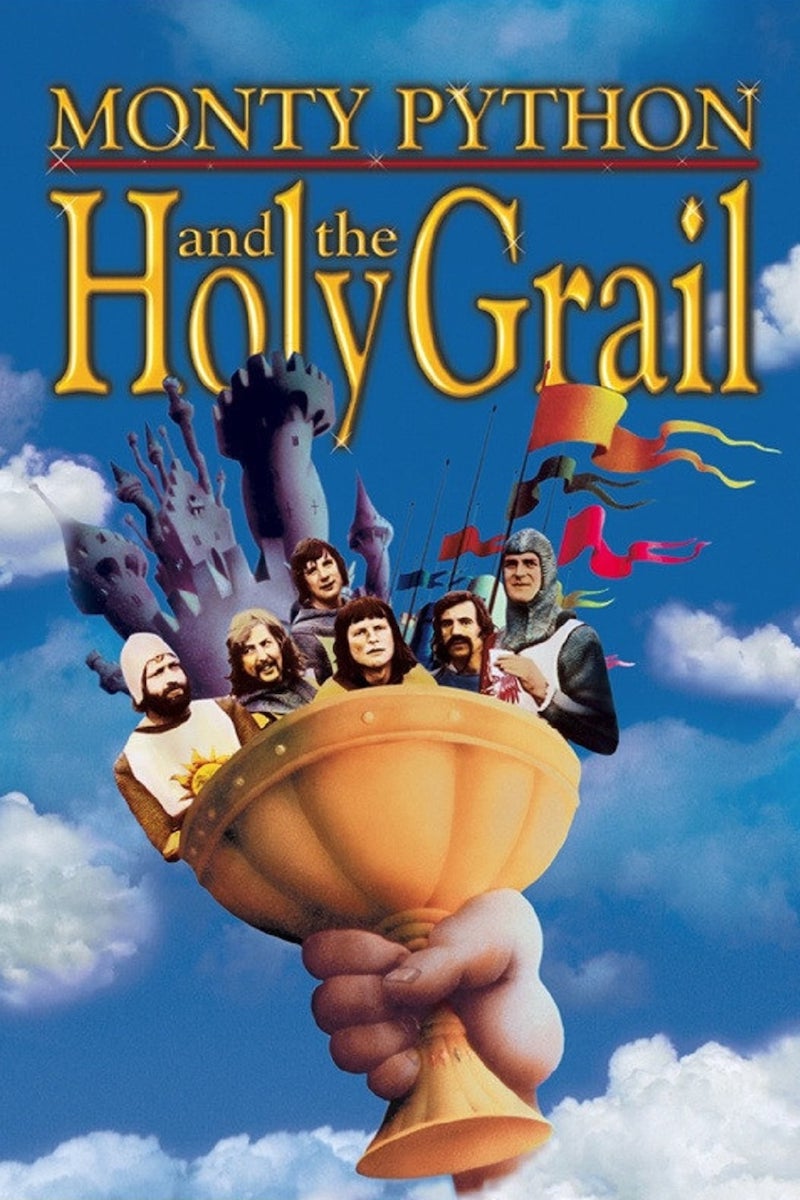 Written By
Jono Simpson
More from Jono Simpson
The cast and crew of Ghostbusters discuss the making of the beloved...
Read More