No matter how terrifying a horror film is, you always know in the back of your head the events taking place could never actually happen. After watching Them! (1954), nobody expected giant ants to appear in their back garden. But what makes an animal horror truly suspenseful is knowing there’s an aspect of realism involved. Arachnophobia (1990) made everyone look into a tub of popcorn before putting their hand inside. The idea of animals acting on their killer instincts is more terrifying than a possessed doll.

After Jason Statham punched a Megalodon in the nose for The Meg (2018) and Syfy’s Sharknado (2013) films won a cult following, it was only a matter of time before the alligator ‘creature feature’ made a big-screen comeback. This is a sub-genre of horror that’s never had a lot of success, however. Outside of Alligator (1980), there’s never been a ‘gator-focused feature that equalled the suspense generated by Steven Spielberg’s classic Jaws (1975). 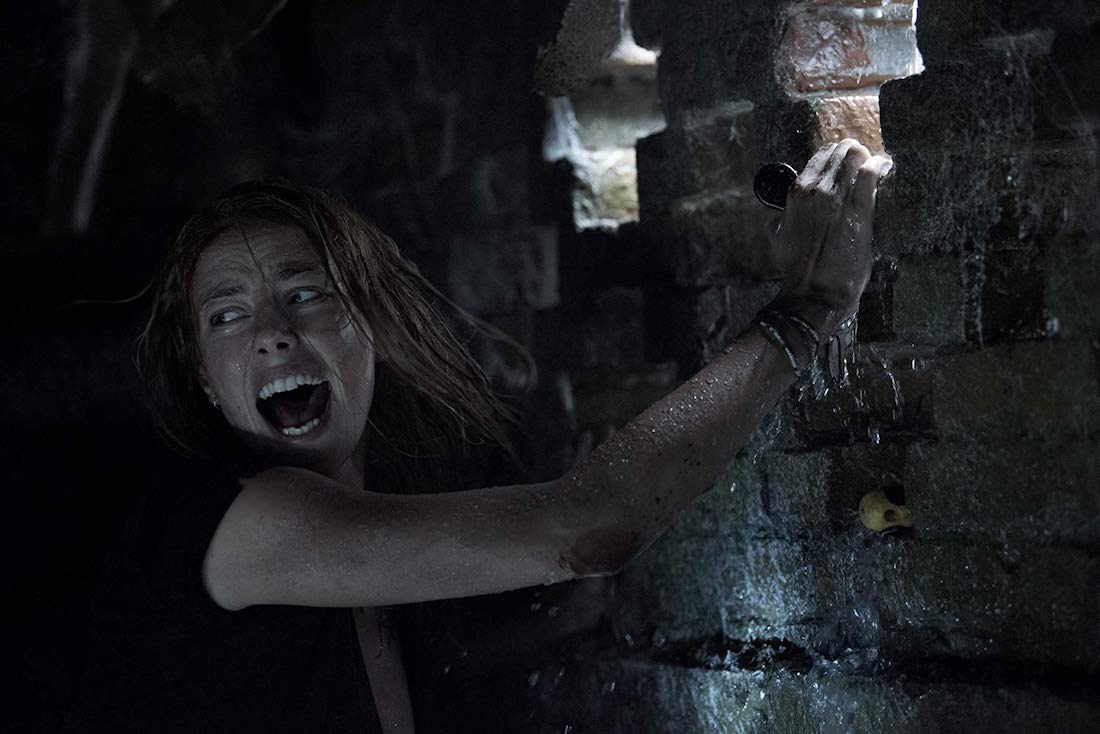 Crawl is brought to us by the talented French filmmaker Alexandre Aja, whose breakout film High Tension (2003) remains one of the most effective pieces of the New French Extremity movement. Best-known for his successful remake of The Hills Have Eyes (2006), Aja has a proven skill for producing frightening cinema. Produced by Sam Raimi on a small $13M budget, writers Michael and Shawn Rasmussen (The Ward) crafted an affectionate throwback to the glorious monster movies of the 1980s.

When a hurricane hits her hometown of Coral Lake, Florida, Hayley (Kaya Scodelario) ignores the evacuation orders to search for her missing father Dave (Barry Pepper). Finding him gravely injured in the crawlspace under their old family home, the two become trapped by the encroaching floodwater. As the storm grows stronger and the seawater rises, Hayley and her father realise that the weather’s the least of their problems…. as they also have to escape the clutches of some hungry and cunning alligators. 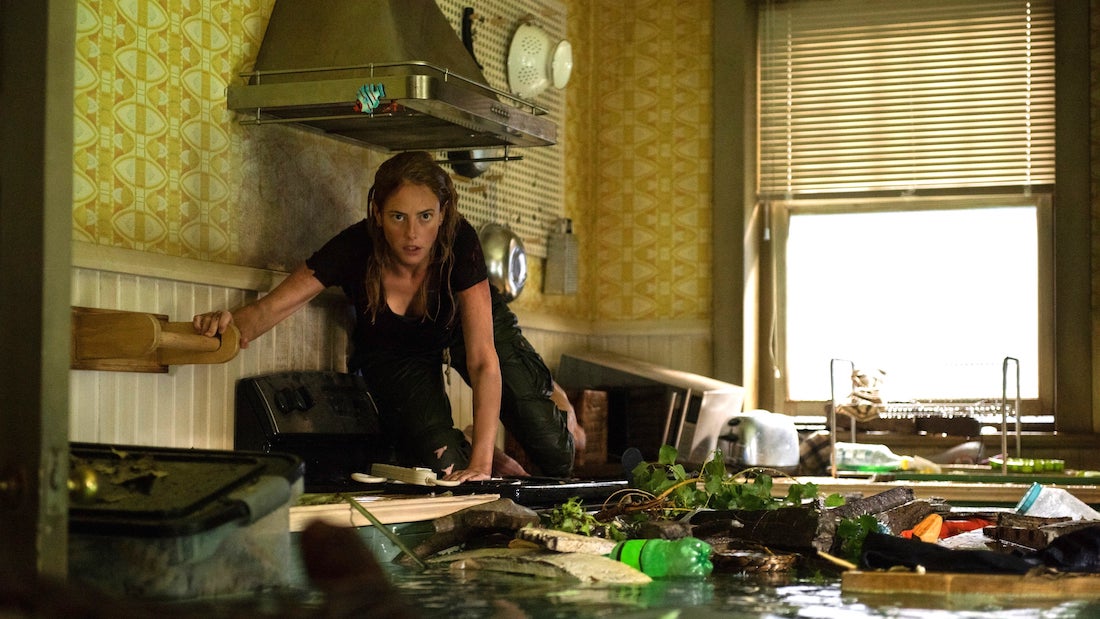 Kaya Scodelario (Skins) does a solid job with this material. There’s less for the actress to sink her teeth into than she was given in the Ted Bundy biopic Extremely Wicked, Shockingly Evil and Vile (2019), but she’s intense and handled the action well. Despite her character’s superficial development, the audience can relate to Hayley’s struggle through such an extreme situation. However, a two-dimensional hardened survivor is all she comes across as. Maybe it was exhaustion from spending the majority of the production underwater, but there’s a tetchy quality to Scodelario’s performance. Her stubbornness makes her character unlikable. Playing her father, Barry Pepper (Saving Private Ryan) spends the majority of the movie unconscious but delivers a sincere performance when needed. Pepper also elicits a laugh or two and it’s clear the two actors are game for having as much fun as possible.

There are several aspects of Crawl I enjoyed, but the main is how practical the setup of the story is. Using Florida as a location makes audiences believe a disastrous storm is a possibility, and the notion of alligators roaming the streets isn’t offhandedly ludicrous. Similar to Jaume Collet-Serra’s The Shallows (2016), it’s easy to buy into the story. The weather acts just as much as a character as both the humans and alligators, as the terrifying hurricane creates suspense from beginning to end. It’s unpredictable and created many additional obstacles for Hayley and Dave to navigate while avoiding alligators.

The self-referential humour Aja displayed in his remake of Piranha 3D (2010) is less tongue-in-cheek and more sinister in Crawl. One scene, in particular, involving a group of looters, will have one almost rooting for the alligators. The director’s eye for gore and his innate ability to craft a suspenseful sequence remains intact. The bare-bones plot, almost entirely set inside a flooding basement, allows the director to focus on creating a specific mood and tension. Not only are these characters trapped, but the situation gives the film a built-in ticking clock as the waters slowly rise. Aja never lets the tension drop. Every second Hayley and Dave are closer to being eaten or drowning. Crawl becomes a nail-biting experience. 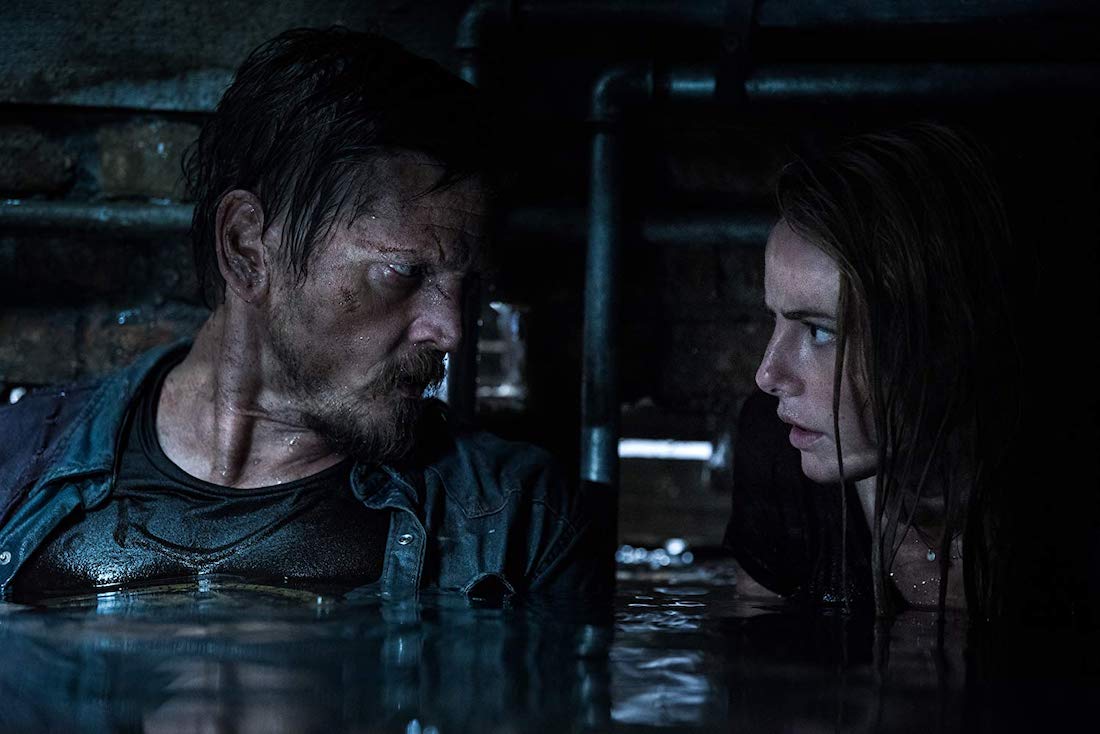 The clever use of cinematography from Aja’s frequent collaborator, Maxime Alexandre, helps boost the tension immeasurably. Crawl spends half of its runtime in a basement with tight camera angles and minimal lighting, creating an incredibly claustrophobic atmosphere. Each shot demonstrates just how little room the characters have to move around, and how they can see just far enough to know where the predators are lurking. Every frame is captured with such precision that the director has audiences in the palm of his hand. Something as simple as a log floating past the camera creates such a weighty presence, as it’s easily mistaken for the creatures stalking their prey.

The director’s eye for composition and creativity can also be seen in Crawl, with moments like an overhead shot of alligators tearing an unsuspected victim apart, a bloody attack captured in the reflection of a warped store mirror, and the light reflecting onto the character’s faces from the water. These striking visuals all contain the director’s thumbprint. However, there are several moments in the basement when it’s difficult to differentiate what’s happening. Amidst all of the chaos, as the toothy creatures swim into the basement, it’s difficult to pinpoint where the danger is and, most importantly, where safety lies. One could argue that it’s a creative choice to help build suspense, but I found it frustrating at times.

The Rasmussen brothers have written a plot that sets things up, builds steadily, and accelerates at all the correct moments. Unfortunately, it does take a reasonable portion of the short 90-minute runtime for Crawl to find its footing. Nonetheless, once the action begins and momentum is achieved, there are barely any lulls. The narrative is formulaic and predictable, with no twists, but that’s not necessarily a bad thing. Unlike Deep Blue Sea (1999) or Lake Placid (1999), these animals aren’t genetically-enhanced either. Crawl is all about fighting for survival against Mother Nature. 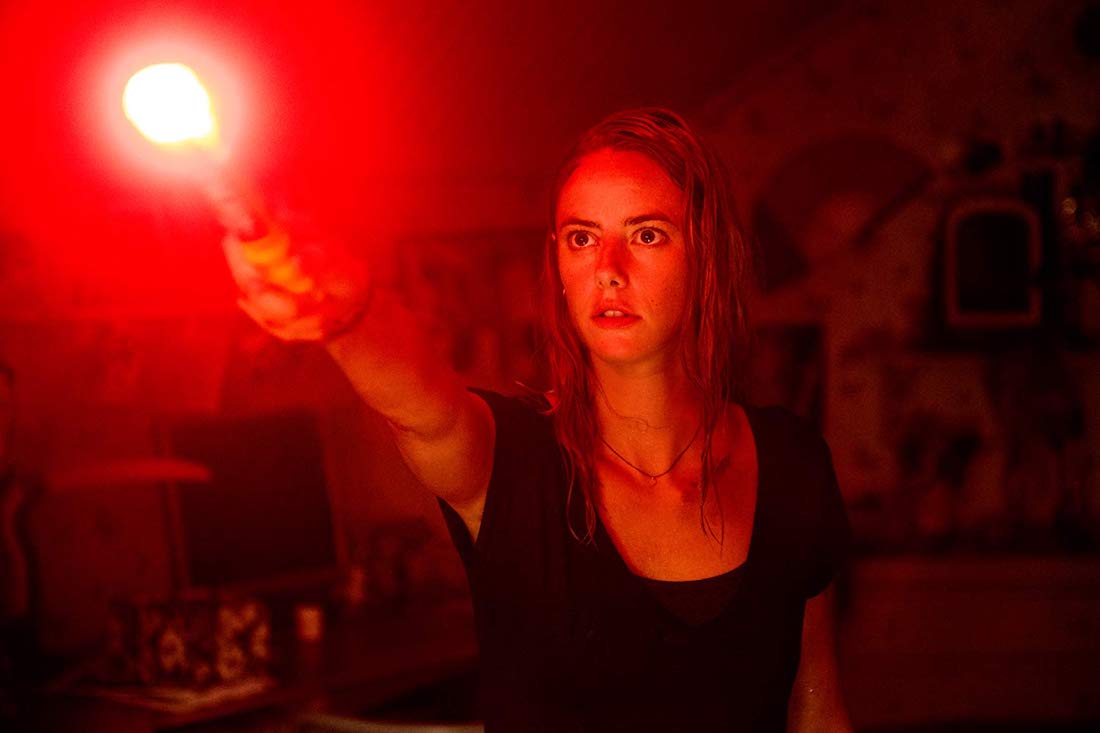 As realistic as the alligators look and behave, to fully engage with Crawl one has to suspend disbelief for the survivalist action. There’s plenty of questionable character decisions that help the plot move on, combined with Hayley and her father becoming all too familiar with resetting broken bones and walking off some vicious attacks.

Exposition is fed to the audience without becoming patronising. An opening flashback explains how Hayley became such a versatile swimmer, for instance, and key information about the ‘gators and their impaired vision is dropped into the script naturally. However, a subplot about father and daughter reconstructing their relationship feels shoehorned in and, throughout, characters try and reconcile at the most inappropriate times. It ultimately weighs the story down. As Hayley and Dave have several heart-to-hearts, it’s baffling how much they disregarding the danger surrounding them.

At its core, Crawl is everything one wants from a modern creature feature. Its kills are brutal and there are plenty of nasty surprises to get the heart pounding. Some of the set-pieces are ludicrous and physically impossible, but they’re all incredibly good fun to watch. Alexandre Aja creates develops truly palpable terror to go with the cheesy monster mayhem. Crawl mixes elements from The Shallows with Don’t Breathe (2016) against a natural disaster backdrop, so if you’re hungry for gripping thrills and claustrophobia, this is a B Movie deserving of your time. 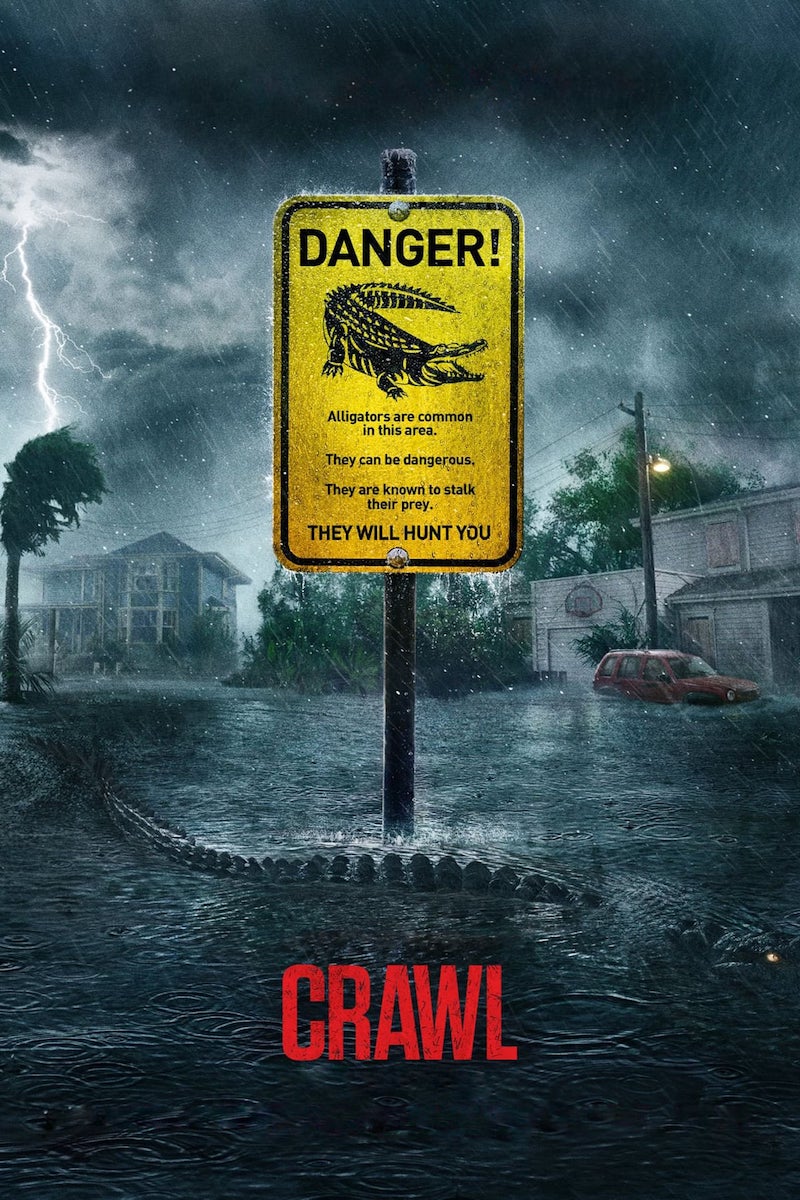