As Russia move missiles into Cuba, the United States teeters on the brink of nuclear war. Escalating tensions are driving people to fear and panic, but one film director sees only opportunity. Joe Dante’s Matinee (1993) follows said man; someone willing to use every trick in the book to scare his audience. It’s a love letter to 1950’s monster horrors and a tribute to the entrepreneurialism and showmanship of their filmmakers. While it was critically successful on release, Matinee was widely overlooked at the time, but with Arrow Films’ DVD and Blu-ray re-release, it’s time to bring it out of the bunker for another look.

Written by Charles S. Haas (who worked with Dante on Gremlins 2: The New Batch), Matinee is set in Florida, October 1962, at the height of the Cuban Missile Crisis. Teenager Gene (Simon Fenton) and his brother Dennis (Jesse Lee) live on a naval base, whilst their father’s at sea helping protect the country. Their small town is gripped by nuclear paranoia, but Gene’s only intent on seeing the latest monster movie from director Lawrence Woolsey (John Goodman): a low-budget horror movie called MANT!

Goodman’s depiction of director Woolsey is a mix of homages, but it’s hard to ignore parallels to horror supremo William Castle. A director equally as famous for his marketing gimmicks as the films he made, Castle was known for in-theatre stunts like winching skeletons across the cinema on pulleys and offering life insurance to patrons. Matinee’s Woolsey is cut from the exact same cloth. Poor and down on his luck, he needs MANT! to be a success, but will his ‘Atmo-vision’ (a man in a monster suit stalking the theatre aisles) and ‘Rumble-rama’ (electric shockers under the seats) win over the audience and distributors? 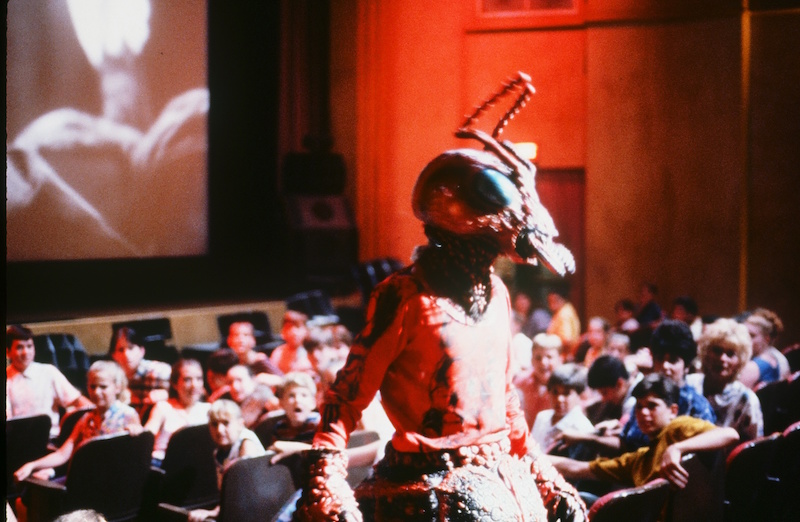 Matinee is the embodiment of Dante’s passion and sensibilities, which makes it a feel like a very personal picture. His love of 1950s science fiction, and reverence for its pioneers, is personified by lead character Gene. This makes comparisons to Dante’s upbringing inevitable. Importantly, this translates on-screen into an inherent wonder for the spectacle and the experience of cinema itself. The latter half of the film concentrates on the theatrical showing of MANT! and the interlinked plots surrounding it, and in so-doing puts the simple act of going to the cinema right at the heart of the film.

Dante manages to get good performances from all of the actors, but especially the younger stars. Cathy Moriarty also stars as Woolsey’s long-suffering girlfriend Ruth; dragged into his gimmicks at one point, persuaded to dress as a nurse and make patrons sign a medical waiver before the movie begins. The supporting cast also sees some of Dante’s regular players return, including Omri Katz (who starred in his TV show Eerie, Indiana) and Dick Miller (the character actor most famously from Gremlins, who’s appeared in every one of his feature films).

It won’t surprise some that Dante got his first break in the industry working with notorious low-budget director Roger Corman. One of the strengths of Matinee is the films featured within, where Dante puts this real-life experience to good use. There’s no better example of this than the snippets of Woolsey’s atomic parable MANT!: a tale of a mutated half man, half ant character, which strikes a balance between comedy and reverence as it nails all the clichés of ’50s B Movies.

In another fantastic, segment Dante cuttingly critiques some of the inane releases for children at the time, as Gene and Dennis go to see The Shook Up Shopping Cart (a family movie riffing on early live-action Disney films such as The Love Bug). The parody follows the story of a sentient shopping trolley, with an early appearance from star-in-waiting Naomi Watts, no less. It’s a brief scene, but one that perfectly demonstrates the wackiness and humour that Joe Dante brings to so many of his movies. 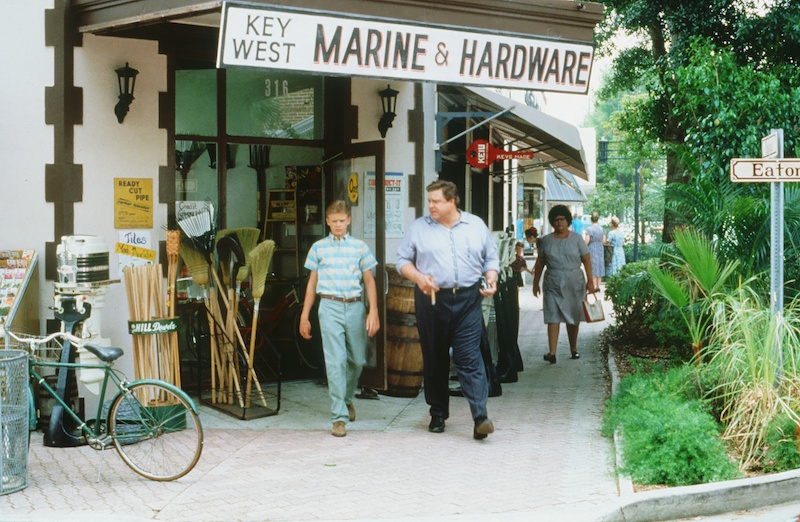 Beneath the superficial fun, Matinee is an exploration of the power of cinema and how films can manifest our own fears. It’s no coincidence that Woolsey’s schlocky tale of unintended atomic consequences plays out over Cold War intensification. It demonstrates how films can feed on natural paranoia, but also demonstrates the value of seeing these anxieties presented back to us. Dante also comments on filmmakers themselves; how showmanship can influence audiences and the inherent hyperbole of storytellers. Woolsey’s own philosophy sums this up well. When recalling the meeting between a caveman and the first mammoth he says “… he does a drawing of the mammoth, and he thinks, ‘People are coming to see this. Let’s make it good. Let’s make the teeth real long, and the eyes real mean…’ Boom! The first monster movie.”

Whilst this depth is clear, the film is never allowed to get bogged down with seriousness. It retains an upbeat, comedic tone throughout. Never straying into pure pastiche, it’s more like a loving homage to a bygone age of cinema. The most enjoyable scenes are the ones involving John Goodman. However, by not making Lawrence Woolsey the focus (and concentrating of Gene instead) the film does lose impetus at certain points. That’s not to say any of the other actors are inferior, more a case of being forced to look away from what should have been the star attraction. The film is an enjoyable, imperfect ride. However, it’s funny, and will definitely delight any B Movie buffs watching without excluding those who aren’t.

Arrow Films is the perfect home for Matinee, as both a high-quality re-issuer, but also a champion of B movies. The disc is stocked with an arsenal of extras. These include some of Dante’s personal behind-the-scenes video, allowing us to see him on directorial duty. There are also some deleted scenes and extended sequences which flesh out some of the action. The enclosed interviews are revealing and show that Matinee was only made due to pure luck when the production lost funding Universal Studios took a vote whether to step in and pay for the film themselves. Despite all this, the real highlight extra is the full, assembled version of MANT! 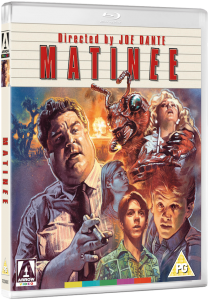