Attempting a sequel to a beloved classic is dangerous, especially when it’s Mary Poppins (1964). This Disney film starred Julie Andrews (Sound of Music) as a magical nanny from the original novels by author P.L Travers, and it took Walt Disney nearly 20 years until Travers finally agreed to give him the rights after coming close to the brink of bankruptcy. The success of Mary Poppins was both a blessing and a curse: Travers’ despised the movie and never forgave Disney for this interpretation of her characters, claiming it robbed them of their subversive edge. A tale recounted in rose-tinted fashion in the later Disney movie Saving Mr Banks (2013).

Emily Blunt (A Quiet Place) follows in Andrews’s footsteps as Mary for this followup, reuniting her with Disney’s Into the Woods (2015) director Rob Marshall. Set several decades after the first story, during the Great Depression of the 1930s, where the Banks children are now grown up and in crisis. Jane (Emily Mortimer) rallies her spirits by whipping up support from the downtrodden working class, but her widowed brother Michael (Ben Whishaw) is a struggling artist. After losing his wife he can barely dodge foreclosure of the house on Cherry Tree Lane, where he lives with his three motherless children: Annabel (Pixie Davies), John (Nathanael Saleh), and little George (Joel Dawson). But after a whirlwind day in the park, the children’s kite pulls their erstwhile nanny Mary Poppins (Emily Blunt) from the sky. 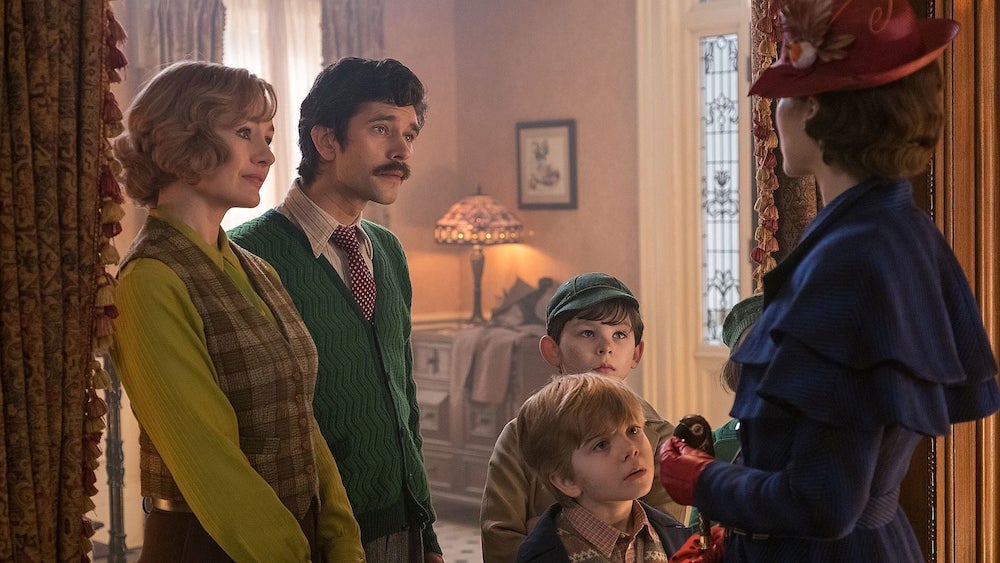 Filling Andrews’s perfectly fitted shoes as Mary Poppins is a daunting task, but Blunt proves she has the versatility to do so, and she’s a wonder. She plays Mary as someone sly, mysterious, and generous in only an offhanded way. One minute she’s businesslike, the next slightly flirtatious with a know-all smile. Blunt captures the essence of Mary Poppins beautifully, with a rich and dry wit that makes the character her own instead of an impersonation of what came before. With her brisk tone and pompous vowels, she sometimes resembles a Tim Curry’s Frank-N-Furter from The Rocky Horror Picture Show (1975). It’s a distinct interpretation you’re attracted to, albeit slightly scared of her due to her abruptness. Blunt’s much closer to Traver’s literary version of the character, which would have pleased the infamously pernickety author.

Lin-Manuel Miranda of Hamilton fame is adorable playing cockney lamplighter Jack, in an amiable and goofy performance that makes sense as a tribute to Dick Van Dyke’s sidekick Bert. In his first role for a major studio, Miranda’s light on his feet and a wonderful screen performer, although he fails to leave a lasting impression and, presumably in homage to Van Dyke, makes sure his cockney accent isn’t too realistic. Although his vocals and accent don’t fully stick during his performance of “(Underneath the) Lovely London Sky”, Miranda has enough energy to power through the numbers and salvage them. Wisely, Marshall doesn’t try to turn him into Mary’s love interest, so the pair seize plenty of opportunities to sing and dance together like old friends. Every shuffle and twirl is a gesture of pure admiration. 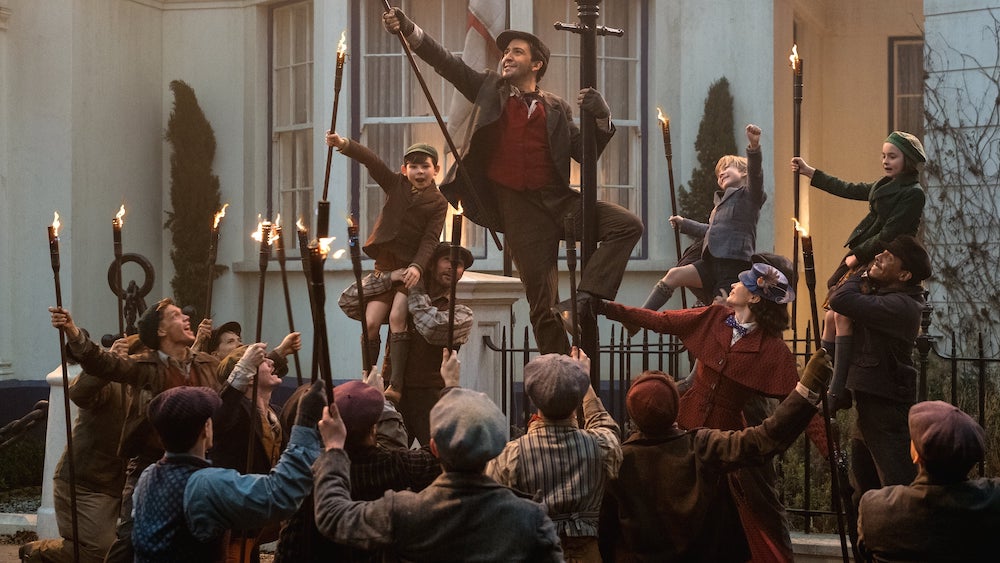 The rest of the cast is strong and thrive in their roles. Ben Whishaw (Paddington 2) plays the grown Michael Banks with so much dramatic intensity that every scene he appears is draped in melancholy. His character’s grief is so palpable early on that it doesn’t have to be mentioned again for it to hang over the story. However, Emily Mortimer (Hugo) dispels the gloomy atmosphere and then some. As Jane the labour organiser, she has a meltingly soft face and, much like her Suffragette mother, a strong backbone. The prospect of the Banks children losing their home doesn’t seem so terrible. Brightening things up, audiences of all ages will marvel at the return of two Disney movie icons: Dick Van Dyke himself (Chitty Chitty Bang Bang) and Angela Lansbury (Bedknobs and Broomsticks). Even the ripe age of 92, Van Dyke reminds you how much fun a gangly-legged musical number can be, and Lansbury tugs heartstrings while handing out balloons during the film’s colourful ending.

Having previously directed Chicago (2002), Rob Marshall clearly loves making big-budget Hollywood musicals. In Mary Poppins Returns, he ambitiously creates a delightful world that families with children of all ages will be eager to dive into. The amazing production design and use of vivid colour are excellent, with deep blues and bright reds standing out against the grey tones of London buildings and overcast skies. Marshall tries to honour the original during the films dazzling centrepiece “The Cover is Not a Book” musical number, too: a blend of live-action and 2D animation that’s almost hallucinatory, taking the bright bold colours missing from the London setting. The actors are dropped into a cartoon world, wearing dresses, coats, and trousers that appear to have been brushed on with watercolours. Details such as buttons and bows are even drawn on with black ink. It’s an enchanting illusion and magnificent homage to the original’s “Jolly Holiday”. 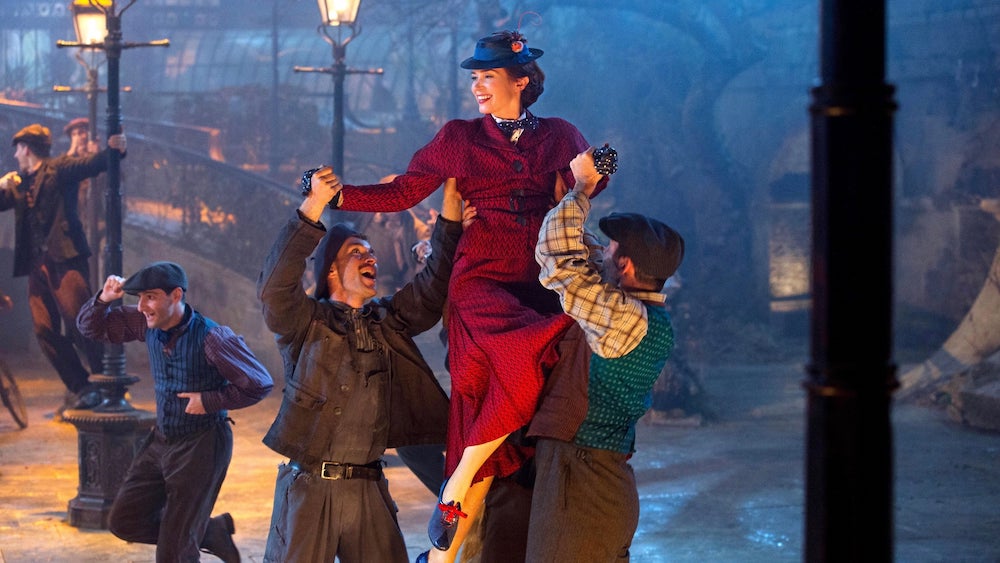 Everything Marshall captures contains a certain Disney glow: from an underwater party to a musical theatre knees-up, the energy and level of imagination is raised through the roof. Screenwriter David Magee (Life of Pi) exhibits a clear admiration for the 1964 movie, too, although there’s an unfortunate weakness with the narrative. The actual plot of Mary Poppins Returns is rather thin and predictable, although it works as a useful lesson for today’s generation of children. Mary pushes the characters into the right direction to let them figure out their own problems whilst bringing a little joy back to their lives.

Several of the musical numbers are especially fun, and it’s a pleasure to see Blunt and Miranda look so comfortable during a song-and-dance together. The number “Nowhere to Go But Up” will make audiences recall the joy of “Let’s Go Fly a Kite”, and the moment I realised Marc Shaiman and Scott Wittman’s music still had Disney magic was during Blunt’s haunting rendition of “The Place Where Lost Things Go”—a heartbreaking lullaby that’ll certainly elicit a tear or two. However, without the original Sherman bothers penning the music, many of the songs don’t leave a lasting impression on par with classics like “Supercalifragilisticexpialidocious” or “Chim Chim Cheree”. Also, the song “Turning Turtle” led by Mary’s Cousin Topsy (Meryl Streep) will leave a sour taste in your mouth, which you’ll be needing a spoonful of sugar to help remove.

Although not “practically perfect in every way”, Marshall certainly pulls out all the stops to make this work. Mary Poppins Returns plays lovingly with nostalgia for grown-up kids, but there’s always a feeling something is missing. While it compliments the original and certainly has its own merits, nothing feels very new. The musical numbers will work better for newcomers, while older audiences may find themselves craving a rewatch of the timeliness original.