Ray Harryhausen is revered as a pioneer in the world of visual effects. If his name’s at all familiar, chances are he needs no introduction. George Lucas, Nick Park, and Peter Jackson are just some of the many filmmakers that cite his work as a major inspiration that drove them to make the kind of movies they do.

When he saw King Kong (1933), 13-year-old Ray Harryhausen was captivated by Willis O’Brien’s ground-breaking VFX. The sense of wonder they evoked spurred him on to learn how that kind of movie magic was wrought. 16 years later, he was an animation assistant to Willis O’Brien, learning from the master and helping his childhood hero bring another giant gorilla to life in the form of Mighty Joe Young (1949). Around this time, he was also making his own series of stop-motion adaptations of some Mother Goose and Brothers Grimm fairy tales for television. After these half-dozen shorts, he would never again be credited as a director during a long career lasting more than six decades. 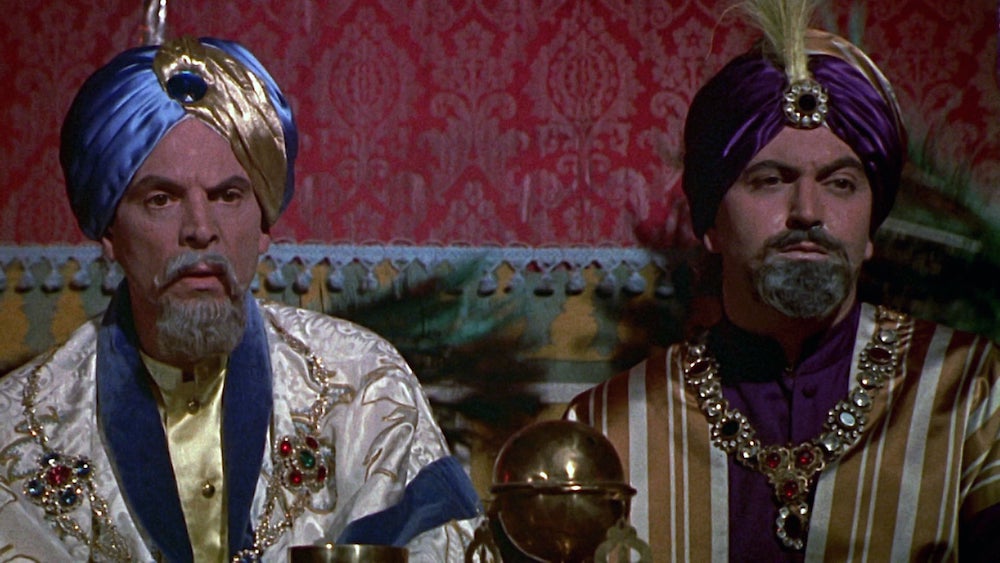 Having said that, Harryhausen retained complete creative control of his projects—from initial concept through nearly all aspects of production, in much the same way as directors now considered an auteur. The only reason he was never again credited as a director is down to the strict rules of the Directors Guild of America. But the feature films he made have become their own genre and are usually referred to as ‘Harryhausen Films’, affording him the kind of kudos usually reserved for famous directors.

Appropriately enough, The 7th Voyage of Sinbad was also the seventh time Harryhausen had been put in charge of the special effects and, by then, a name had been given to the inventive ways he combined stop-motion animation, rear-screen projection, live action, and matte paintings on glass. It was producer Charles H. Schneer who suggested calling the technique ‘Dynamation’. He’d already produced three ‘creature-features’ with Harryhausen—It Came from Beneath the Sea (1955), Earth vs. the Flying Saucers (1956), and 20 Million Miles to Earth (1957)—so he’d seen the development of the process and the transition of his visual effects from monochrome to colour. He would go on to collaborate on all of Harryhausen’s subsequent films. 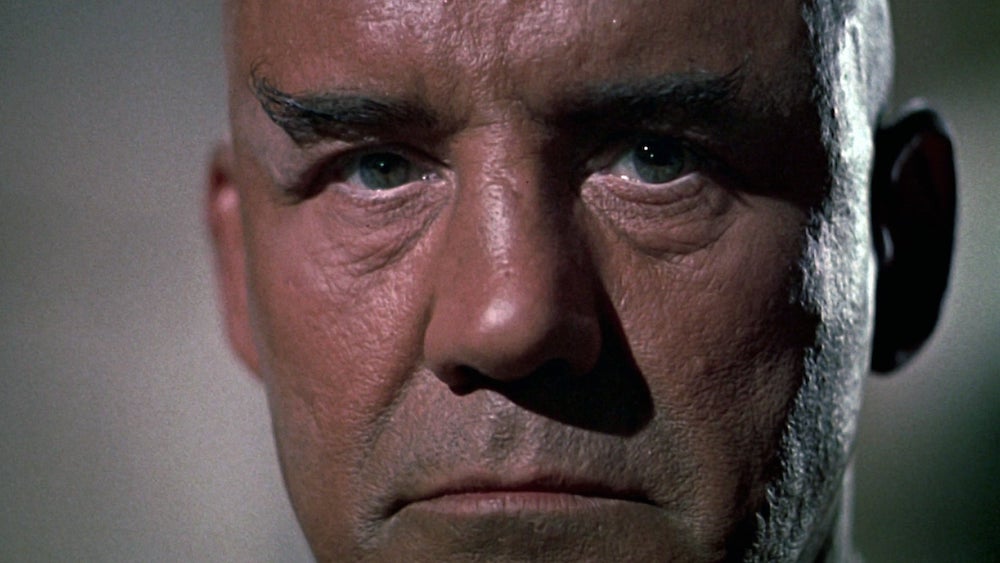 Sketches and script fragments show Harryhausen had been planning a Sinbad the Sailor film since 1953, and first showed his ideas to RKO studios, after he’d been disappointed by their film Son of Sinbad (1955) because the creatures were only alluded to and never seen! He thought he’d be onto a winner, but the studio’s opinion was that costume dramas were no longer in fashion. That’s until Charles Schneer saw some of the concept drawings and storyboards and convinced Paramount to budget it.

Sinbad the Sailor was already a popular fictional figure who encountered monsters, magicians, and princesses during his seven voyages of discovery to strange lands. The adventures of Sinbad were first told in the medieval middle east and retold down the generations before they were eventually included in the collection of stories known as One Thousand and One Nights and translated into several European languages early in the 18th-century. 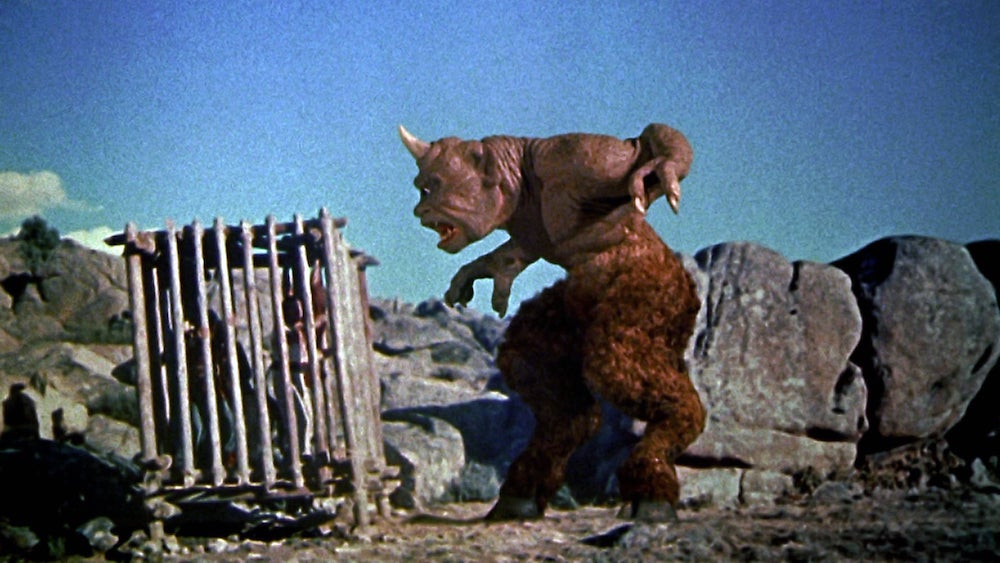 Kenneth Kolb had this rich heritage to draw upon when he was assigned to write the script. Apparently, the sole stipulation from Harryhausen was that the story must include Sinbad sword-fighting with a skeleton. It was something that he’d been longing to animate for years!

The story deals with the machinations of the malevolent magician Sokurah (Torin Thatcher) who is desperate to get back to the island of Colossa, where he was forced to abandon a magical lamp that imprisons a powerful genie. He uses his magic to shrink the Princess Parisa (Kathryn Grant), and her fiancé Sinbad (Kerwin Mathews) is gullible enough to believe the evil magician when he blames the curse on random ‘dark forces’ and explains that the potion he needs to counteract it requires the shell from the egg of the Roc, a giant bird found only on Colossa… 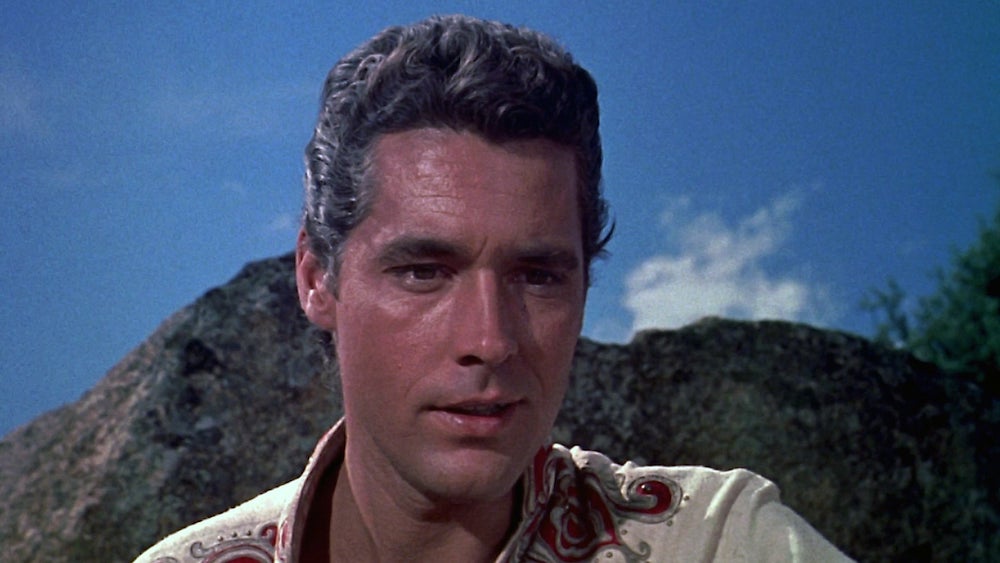 If I was writing this as a review of a current release, I’d have to discuss issues such as gender representations, cultural appropriation, and the casting of white actors to play ethnic foreigners. But when one considers this film was made 60 years ago, I think its shortcomings in these areas can be overlooked, at least to some extent! I mean, you’d be hard pushed to find such a positive representation of Islam in a mainstream movie coming out of Hollywood these days. I’m sure it is not based on rigorous historical research—but it does portray the medieval middle east as having a rich culture and showcases some of its enduring folktales. It’s a fantasy inspired by Persian mythology with a generous dash of the Greek myths thrown in for good measure.

Although Princess Parisa wears rather nice and, for the time, rather risqué costumes, she isn’t there solely as eye-candy. She’s the main driving force behind the narrative and although she’s manipulated by the magician and is to be married to the hero, she’s also shown to be clever, brave, and pro-active—coming to Sinbad’s rescue more than once. And although the casting is what would be termed a ‘whitewash’ today—Kerwin Mathews and Torin Thatcher are clearly not Arabic—the Hollywood-sourced extras, combined with a little make-up and make-believe, do represent a rich, multi-racial culture. 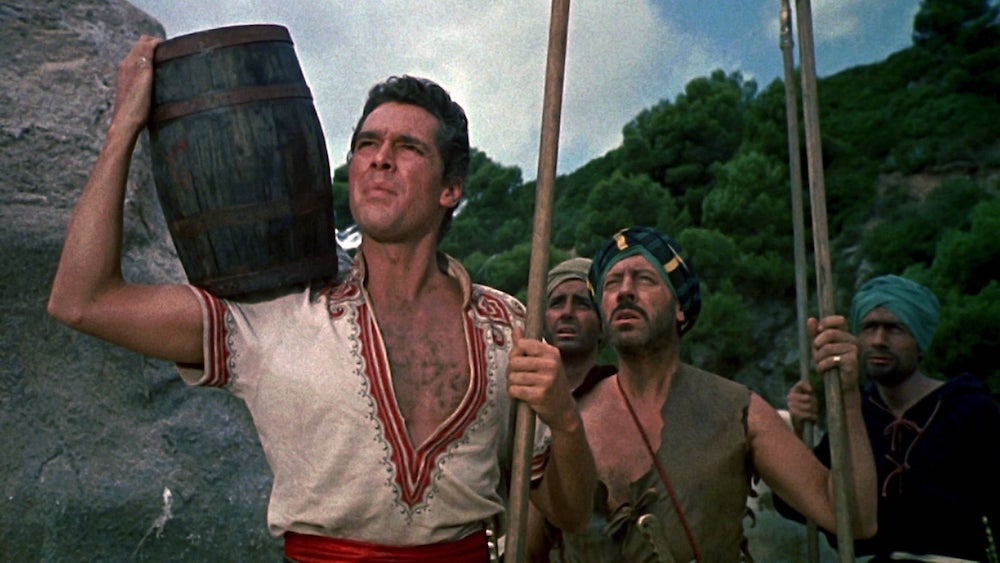 The cast are fairly solid for what would be perceived as Saturday matinee fare. Torin Thatcher was fresh from a role in Billy Wilder’s classic courtroom drama Witness for the Prosecution (1957) and he relishes the part of the bald-headed, black-robed villain. Although often cast in bit-parts when a script called for a ‘pretty girl’, Kathryn Grant had also proved versatile in comedy, dance and drama. She was a female lead in the gangster saga The Brothers Rico (1957) and had already starred alongside Kerwin Mathews in the noir crime thriller Five Against the House (1955). Mathews is fine as Sinbad and plays it like a typical 1950s swashbuckler—he would return to work with Harryhausen for The Three Worlds of Gulliver (1960).

Of course, what we’re really watching for are the creatures and it doesn’t disappoint in this department. We get to see Sinbad versus a giant cyclops, starving sailors versus a two-headed roc chick (which they then roast), a Cyclops versus some sailors (one of whom he then roasts), a dragon versus giant cyclops and—yep, you guessed it!—Sinbad versus a reanimated skeleton! Of course, Harryhausen would return to this in what is arguably his best movie, Jason and the Argonauts (1963), when men battle multiple skeletons in an iconic scene that has been visually quoted many times since… most recently in Game of Thrones season 4. 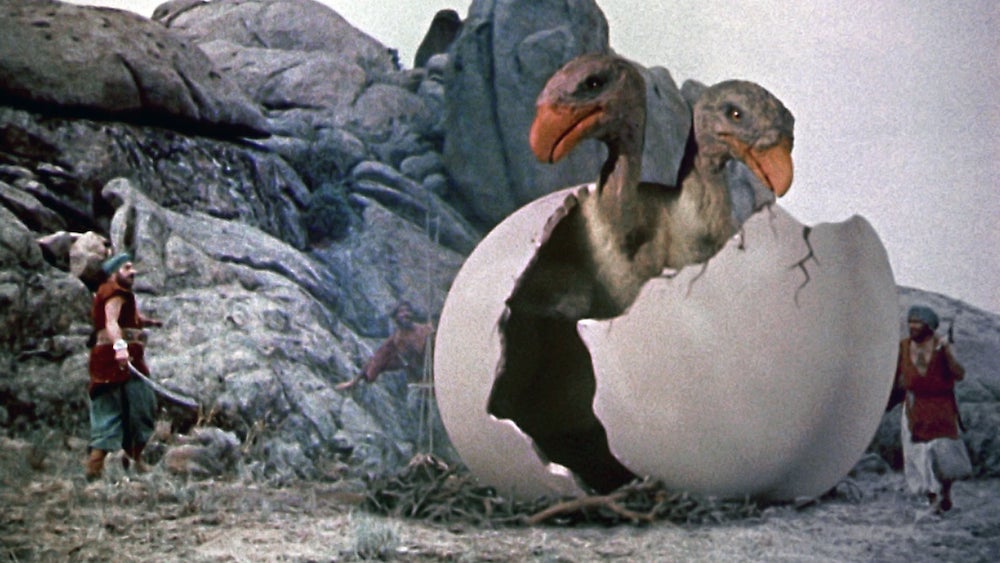 Harryhausen shot most of the animations in the Los Angeles garage he’d been using since he started out and worked with a very small team. His father made the jointed metal armatures for the clay figures to be built around. His mother made any tiny costumes that were required. George Lofgren, a taxidermist by trade, occasionally collaborated on the model-making and animation. So, obviously, the special effects are not digital but they have a magic and charm all their own. Today’s younger audiences will either love the distinctive hands-on approach and appreciate how innovative this was back then… or have a good chuckle. Those who saw these films during childhood will enjoy a flush of nostalgia. Whichever, it remains entertaining even after six decades.

Cinematographer Wilkie Cooper, who’d been a mainstay at Ealing Studios, makes the most of the new colour processes here and creates a look that helped define fantasy films of the era. His use of rich reds, deep greens, and dry ice evokes the look of many Hammer Films, Roger Corman classics, and original Star Trek. He returned to work with Harryhausen on The Three Worlds of Gulliver, Mysterious Island (1961), Jason and the Argonauts, First Men in the Moon (1964) and One Million Years B.C (1966).

The 7th Voyage of Sinbad opened at the New York Roxy in December 1958 and was an immediate success. It set a new benchmark for movie matinee family entertainment, reinvented the creature feature as an action-adventure, and influenced a new generation of fantasy filmmakers. Almost immediately, plans for a sequel were put into action. Harryhausen suggested several exciting scenarios—including Sinbad voyaging to a lost world of dinosaurs, somehow ending up on Mars, and a globe-spanning adventure of epic proportions to be titled Sinbad and the Seven Wonders of the World. Although he drew concept art and even some extensive storyboarded sequences for most of these, it wasn’t until The Golden Voyage of Sinbad (1973) that a sequel finally materialised with Sinbad and the Eye of the Tiger (1977) a few years after, to complete his Sinbad trilogy. Perhaps the delay was by choice because, as would be expected, they are stronger efforts all round, and his creature effects more magical than ever…