With episode 6 we enter the post-Frank Spotnitz version of The Man in the High Castle, where the showrunner baton has been handed temporarily to, among others, executive producers David Zucker and Isa Dick Hackett. What’s noticeable in this episode is how the series has taken on aspects of melodrama and, for want of a better definition, ‘soap opera’ structures.

The Man in the High Castle’s subplots are functioning as a novelistic ‘soap opera’ organised around interruptions in narrative, where the switching between each subplot and set of characters provides a continuous sense of expectation. This is a plural seriality, where each interrupting subplot draws us towards one or more cliffhangers. Simultaneously, we’re also getting more of a focus on gender, family, and romance as generic ‘soap’ attributes. 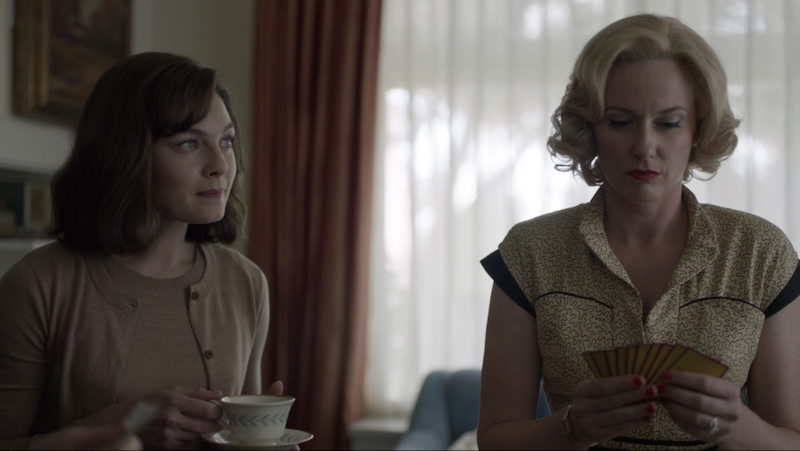 Let’s take a look at how this impacts on our characters. In the alternate 1960s reality, Nobusuke Tagomi (Cary-Hiroyuki Tagawa) not only discovers that this world’s Juliana (Alexa Davalos) is married to his son Nori (Eddie Shin), and he has a grandson, but it is also a reality on the brink of nuclear disaster. As the Cuban Missile Crisis ramps up, Nori, Juliana, and their friends, join in solidarity (well, listening to Bob Dylan gets the ball rolling) as they prepare for a ‘Ban the Bomb’ march.

After trying to adjust to this confusing situation, Tagomi hovers at the edge of his new family dynamic. He’s warned by Nori not to go near his grandson and urged to sign the papers for the divorce wife Michiko (Yukari Komatsu) so clearly wants. We have yet to get to the bottom of why his son and wife want to distance themselves from him. The imperative at the end of “Kintsugi”, as they all gather to listen to JFK’s speech to Nikita Khrushchev imploring him “to move the world back from the abyss of destruction”, is surely for Tagomi to learn the lessons of history and return to his own universe and save it from annihilation. 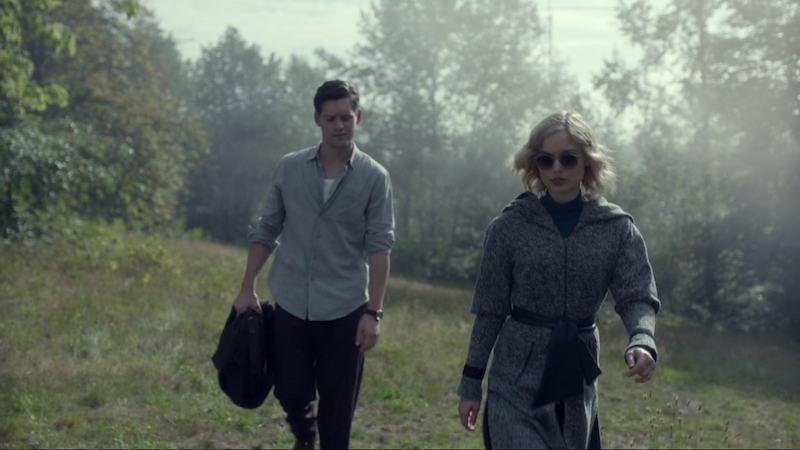 The family is also central to the developing crisis in the John Smith household. There are histrionics aplenty as Thomas (Quinn Lord) announces he’s been chosen to go on a trip to promote the Reich’s ideology with the Hitler Youth in South America. A lot of hand wringing from Mr. and Mrs. Smith ensues as they initially sink Thomas’s hopes of going on the trip.

However, our sympathetic Nazi John Smith (Rufus Sewell) has an ace up his sleeve. It’s all a clever set up to ‘kidnap’ his own son in the Andes, blame it on the Jews, and then keep Thomas and his genetic defect safe from the Reich’s prying eyes. Again, these scenes operate on the use of heightened emotions, favouring kinship, family, and blood, over the economic and political themes that the series has been exploring so far. Philip K. Dick’s themes about ‘alternative facts’ and the search for authentic ideology are repurposed into an exploration of the hypocrisy at the heart of family and social values in this alternative universe. 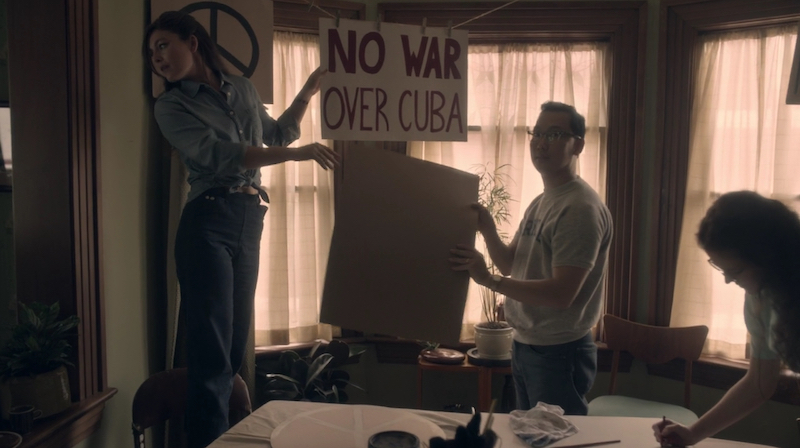 The Juliana in Reich-occupied New York is also on something of a social mission. In order to comply with George Dixon’s (Tate Donovan) request to inculcate herself into the Nazi party and report back to him from the inside, she must attempt to become ‘one of the ladies who lunch’ and battle her way through a vicious game of bridge with the hangers on at Mrs. Smith’s (Chelah Horsdal) house.

Card games they may be, but this little get-together is full of racist bile about the Jews and Japanese. Here, conventions of female subjectivity in ‘soap’ narratives are bolted onto the series as Juliana gradually befriends the childless Lucy (Emily Holmes). Lucy takes Juliana shopping and we learn that Lucy’s marriage is in crisis and she is struggling to bear children in order to be the ‘perfect mother’ for the Reich. 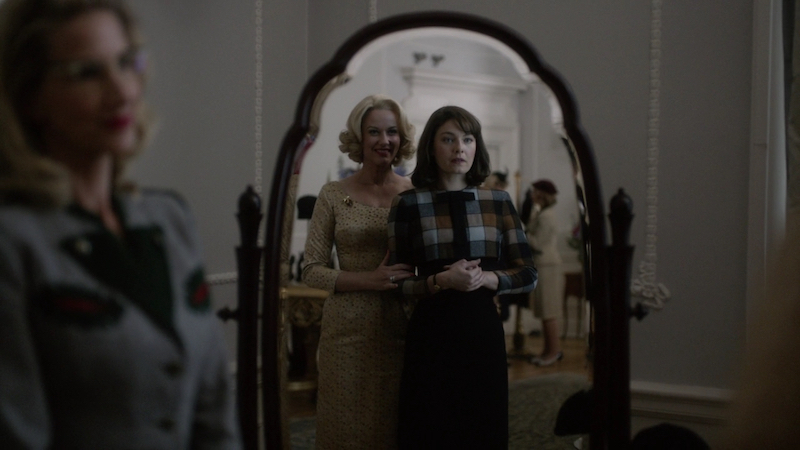 While the ideology of the Reich is reinforced (women determined as nothing more beyond being perfect housewives and mothers), Juliana attempts to spin her a feminist view via the Japanese art of putting broken pottery back together—Kintsugi—and reassure Lucy that “imperfection can be beautiful.” These scenes reminded me of the 1978 mini-series Holocaust, and its own use of soap opera narrative conventions to unpack what happened to German identity in Europe before and after WWII. Whether this humanisation of Nazi perpetrators works for The Man in the High Castle is debatable, but at least George Dixon reminds us who these people are with his retort to Juliana’s sympathetic view: “you can almost forget they are Nazis”.

Finally, Joe Blake (Luke Kleintank) hooks up with Nicole (Bella Heathcote), the alluring blonde hired by his father to persuade him to stay in Berlin. He discovers she, too, was ‘Lebensborn’ and created in the same breeding programme he was. It offers us the flip side of Tagomi’s alternate reality, with its 1960s teenagers preparing to go on ‘Ban the Bomb’ marches, when Joe goes on a search, yet again, for his true self. This involves Joe dropping acid and having sex at a decadent party full of rebellious Nazi youths who see his father’s plans as a folly that could destroy the world.

The episode regrettably insists on resurrecting that old bugbear of the pointless relationship between Joe and Juliana by having her appear in his acid trip. It’s a thoroughly silly and pointless scene that fails to dig deep into Joe’s Nazi heritage and suggests, by the end of the episode, that he has simply found his vocation by putting on an SS uniform and getting moist-eyed over a Nazi swastika armband. 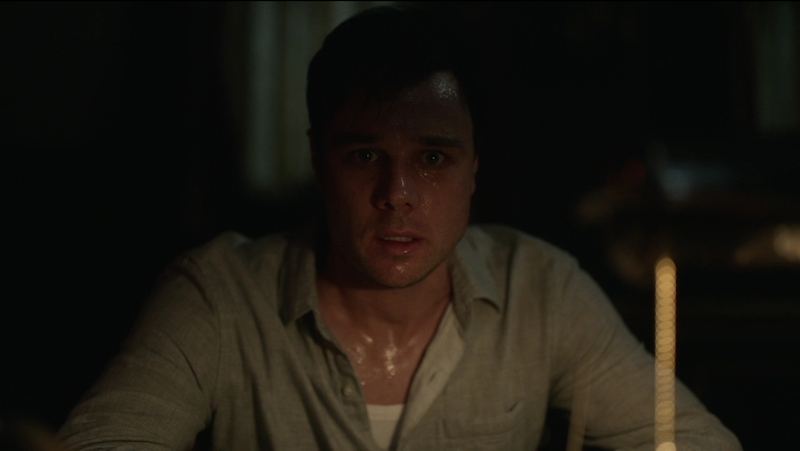 Episode 7 returns us to Frank Frink (Rupert Evans), who was entirely AWOL from the previous hour, and to that endearing double-act Childan (Brennan Brown) and Ed (D.J Qualls). While Frank’s subconscious guilt about the gas chamber deaths of his sister and her children continues to haunt him, he’s absorbed further into the Resistance’s plans. Gary (Callum Keith Rennie) and Hagan (Michael Hogan) plan to use the bomb material he recovered to blow up high-ranking Japanese officials, including General Onoda (Tzi Ma), during one of his routine inspections of a grain warehouse.

Meanwhile, Childan and Ed attempt to make their first sale to generate cash for the Yakuza. They offer a pair of cuff links, supposedly worn by Lincoln on the night of his assassination, to a reluctant buyer. What’s great about this scene is that we get to see how good Ed is at spinning a tale to complete a sale. Childan is suitably impressed but annoys Ed when he suggests that perhaps Ed needs to step out of the shadow of his mentor Frank. The playing between Brennan Brown and D J Qualls continues to delight and it’s always a pleasure to see them in scenes together. 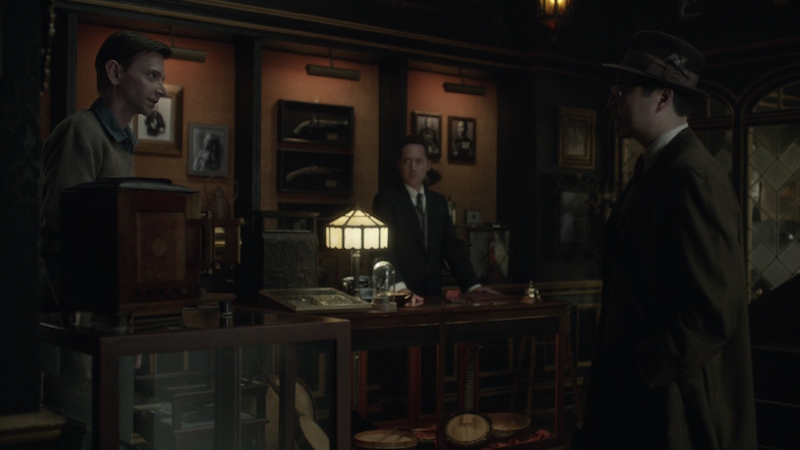 A growing respect develops between them when, as they go to pay the Yakuza, the Kempetai arrive to deal with Yazuka traitors who’ve been working for the Nazis. Inspector Kido (Joel de la Fuente), having shot Okamura and his men while Childan and Ed are locked in a cell, effectively wipes out their debt to the Yakuza. They get high on their good fortune with a pack of Land O’ Smiles legal pot reefers much to the chagrin of a grumpy Frank.

We get an interesting perspective on Kido, too, underlining the notions of faith and family the series is now constantly addressing. We learn that he has placed his wife and son in protective custody to keep them out of harm’s way and this again adds a humanising dimension to a character we should have zero sympathy for. 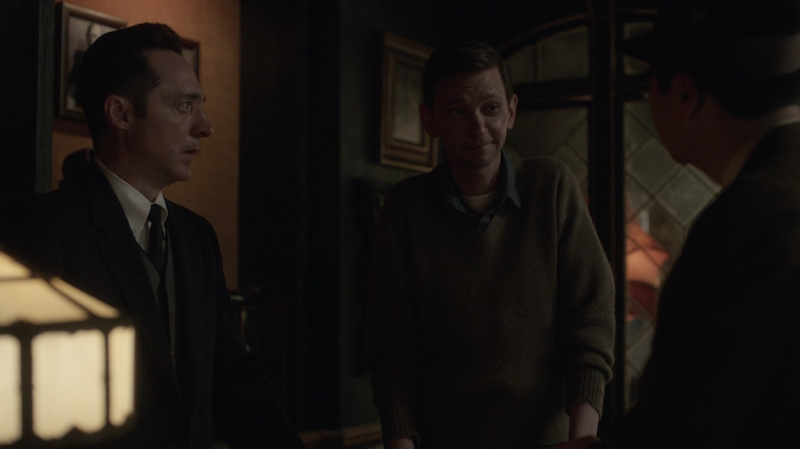 This notion of faith is carried through a number of scenes. We have Frank recalling his Jewish faith and origins in the opening dream sequence, and later in his terse conversation about birthright with Sarah (Cara Mitsuko) when they case out the grain warehouse. Here, Frank also discovers that the grain warehouse is a front for the preparation of the nuclear bomb that Onoda is planning to transport on a public bus and, later, this revelation throws an entirely different complexion on the Resistance’s plans.

The themes of faith and sacrifice are present in John Smith’s funeral address for Dr. Adler when he ponders the notion of mortality and how, above everything else, we sacrifice all for our families. This is deeply ironic given that he murdered Adler to protect his son Thomas, but his son’s seizure at the funeral threatens to expose Smith’s own sacrifice and subterfuge. Juliana suspects something is very wrong in the Smith household when Mrs. Adler announces she intends to order an autopsy to uncover the real cause of her husband’s death, and Mrs. Smith spirits her away to the kitchen. Mrs. Smith manages to persuade Juliana to toe the party line but she already knows there’s a rotten core to the Smith family. 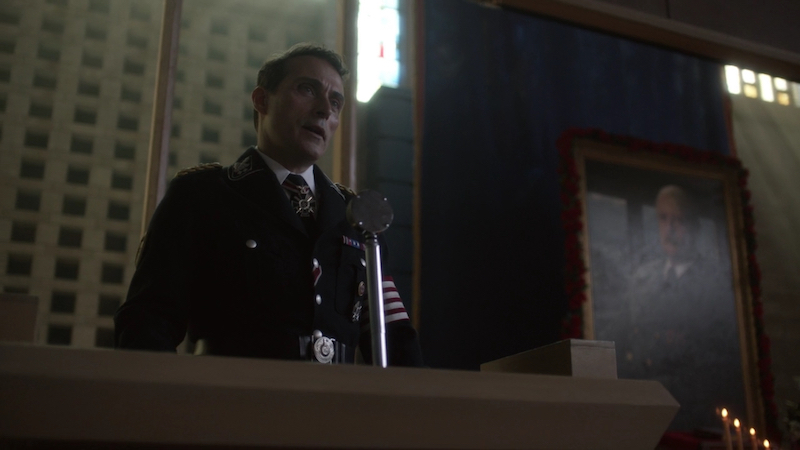 Lastly, the episode also underlines the sudden loss of a figurehead capable of inspiring and inciting faith in the Nazi regime. When Smith receives the dreaded phone call from Himmler in Berlin that the Fuhrer is on his deathbed, it suggests the Reich’s self-belief is about to be thrown into chaos.

This is a more confident episode, helped by Karyn Kusama’s clear direction, a focus on only two parallel narratives, and supported by some excellent playing from Sewell and Horsdal. Tagomi isn’t featured but the non-appearance of Joe in “Land O’ Smiles” really suggests his storyline is surplus to requirement. That is unless the writers have a major role for him in the final three episodes and Joe becomes instrumental in filling the power vacuum in Berlin following Hitler’s predicted demise.