The real Dolley Madison was the wife of James Madison, fourth President of the United States. Her father, John Payne Jr. was one of the earliest plantation owners to emancipate his slaves. She lived through a tumultuous period of US history and saw the first federal laws passed to abolish slavery. She was the very first ‘First Lady’ to set foot in the White House as the seat of government was still transitioning from Philadelphia to Washington, D.C.

The title of ‘First Lady’ had not even come into use back then, but she performed the duties in an honorary capacity, first for Thomas Jefferson and then for her husband. She was in residence when the British laid siege to Washington and torched the White House in 1814, and was credited for rescuing the Declaration of Independence and the famous portrait of George Washington from the blaze. Magnificent Doll opens with this scene as Dolley (Ginger Rogers) climbs up an ingenious step-table contraption, being steadied by two black footmen, to cut the painting from its frame with scissors. 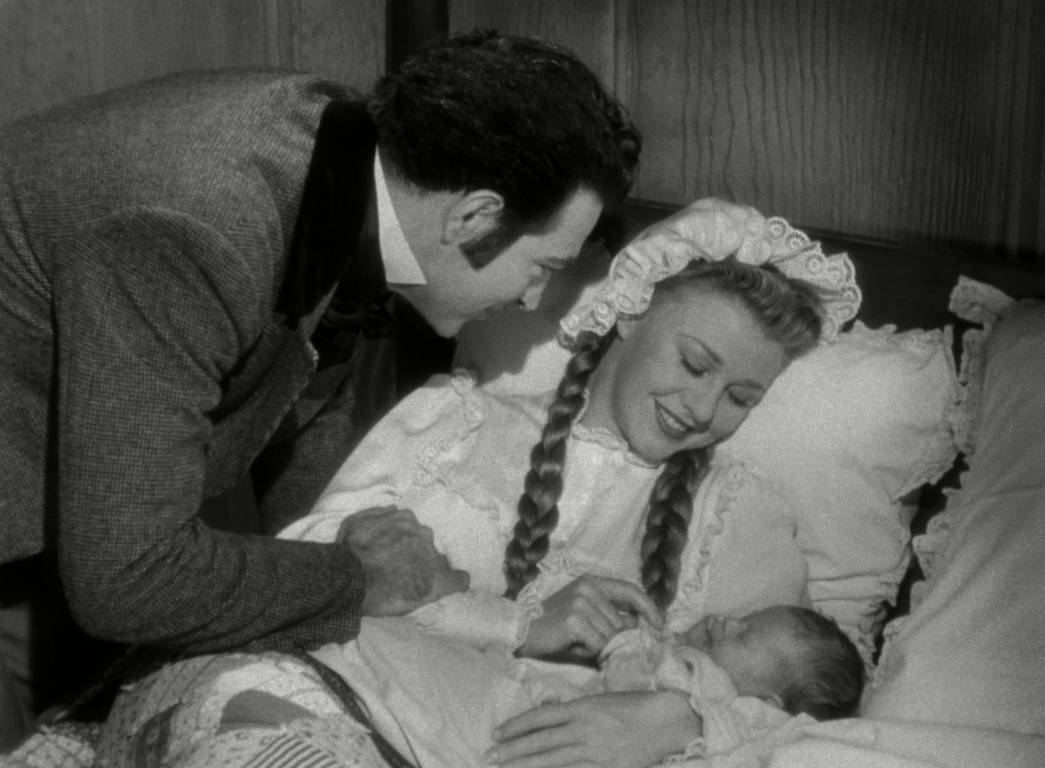 The story is then told in flashback as we join her as a young woman during a party to celebrate the return of her father, John Payne (Robert Barrat), from the war. The frivolity is cut short when, in the same breath as espousing the abolition of slavery, he tells her that he’s arranged her marriage. Specifically, he’s sworn a pact with a man who died saving his life on the battlefield and agreed that she would marry that man’s son. So as the slaves are freed, Dolley is traded like property into a contract of marriage. And lo, the film’s primary themes of liberty, equality and human rights are clearly outlined.

The first act follows Dolley’s marriage to John Todd (Stephen Horace McNally). She adapts to her role in his Quaker community but makes it clear she’s bound, not by love, but by duty alone. Repeatedly she asserts that he will never hear the words “I love you” from her lips. This doesn’t change, even when they have a son together. Don’t you just know that she will eventually tell him… but only when it’s too late? Sure enough a yellow fever epidemic sweeps the nation and its terrible death toll includes John and their baby… Have hankies at the ready! My grandmother used to judge a film by how good a cry she had—she would have loved this one! 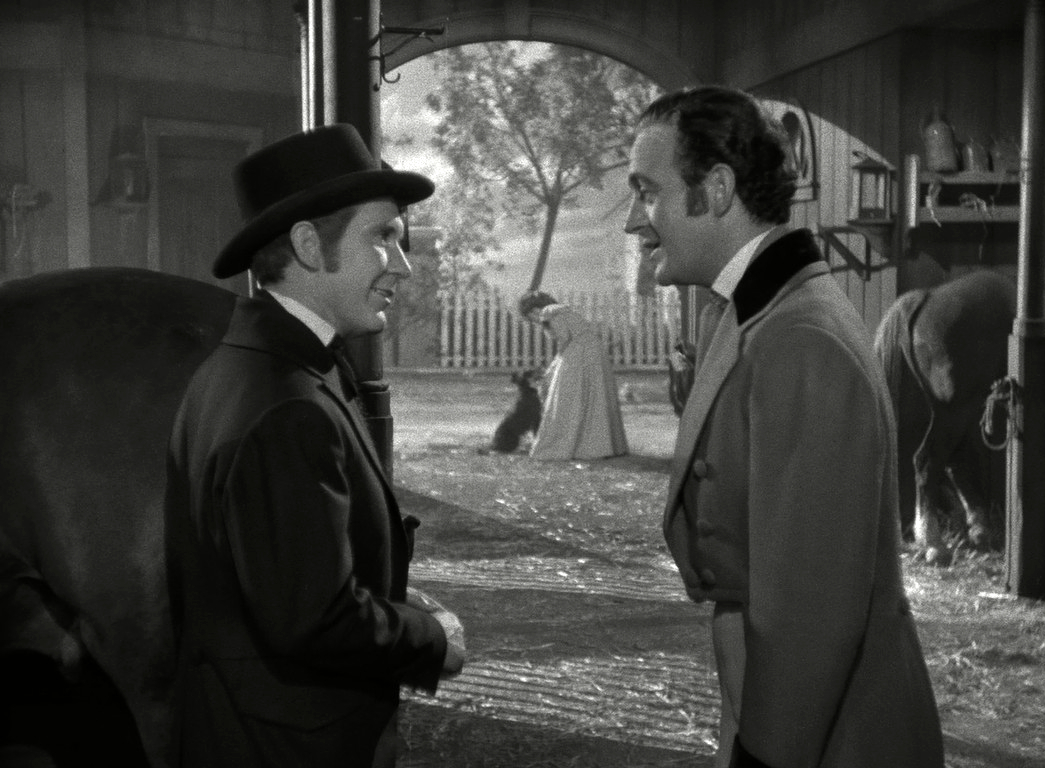 It seems like Magnificent Doll has already delivered a fine biopic, but we’re only 20-minutes in. The rest of the film tracks Dolley’s story as she and her mother set up a lodging house in Washington, D.C and find themselves with tenants—including two politicians who see themselves as potential future presidents: dashing war hero Aaron Burr (David Niven) and mild-mannered congressman James Madison (Burgess Meredith). Of course, she falls head over heels for Burr, at least initially, but as her interest and involvement in politics deepens, she starts to find the idealistic Madison more her cup of tea.

You’d be hard-pressed to find a film with a better Hollywood pedigree. Ginger Rogers already had around 60 roles to her name, and between them the three male leads, David Niven, Burgess Meredith and Stephen (Horace) McNally had about the same! This was a career highlight for prolific and talented character actor Burgess Meredith. For once he gets to play a romantic lead. 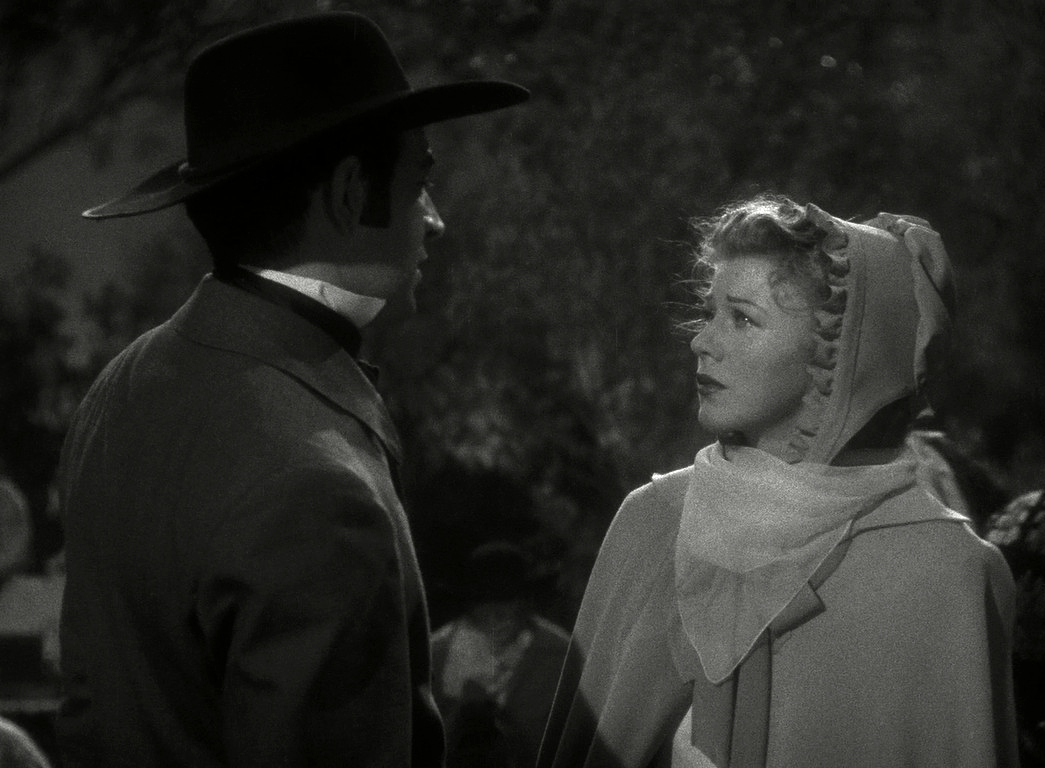 It was Frank Borzage’s 100th film as director. He won his first Oscar for Seventh Heaven (1927), a second for Bad Girl (1931), and was to be awarded the 1962 D.W. Griffith Award for Outstanding Contributions in the Feld of Film Direction. His most famous aphorism was to “make the audience sentimental instead of the player, make the audience act,” and Ginger Rogers bears this out. She’s superb and brings her usual, highly attractive vivaciousness to the part, but balances it with a great deal of emotional intelligence. She puts her all into the role, but never stoops to melodrama or overacting. All the while looking stunning in some gorgeous gowns by Vera West, veteran costume designer for Universal since 1927.

Rogers’ performance may be a revelation to viewers who only remember her for her frothy musical costume dramas where she showcased her talents for comedy, song, and dance with Fred Astaire. Arrow Academy’s new Blu-ray release includes a specially commissioned tribute by Farran Nehme that puts the record straight on this. In this excellent 20-minute rundown of the many serious dramatic roles played by Rogers, we’re reminded that she’d won the 1940 Best Actress Oscar for Kitty Foyle (1940), a year when other nominees included Bette Davis, Martha Scott, Joan Fontaine, and Katherine Hepburn! 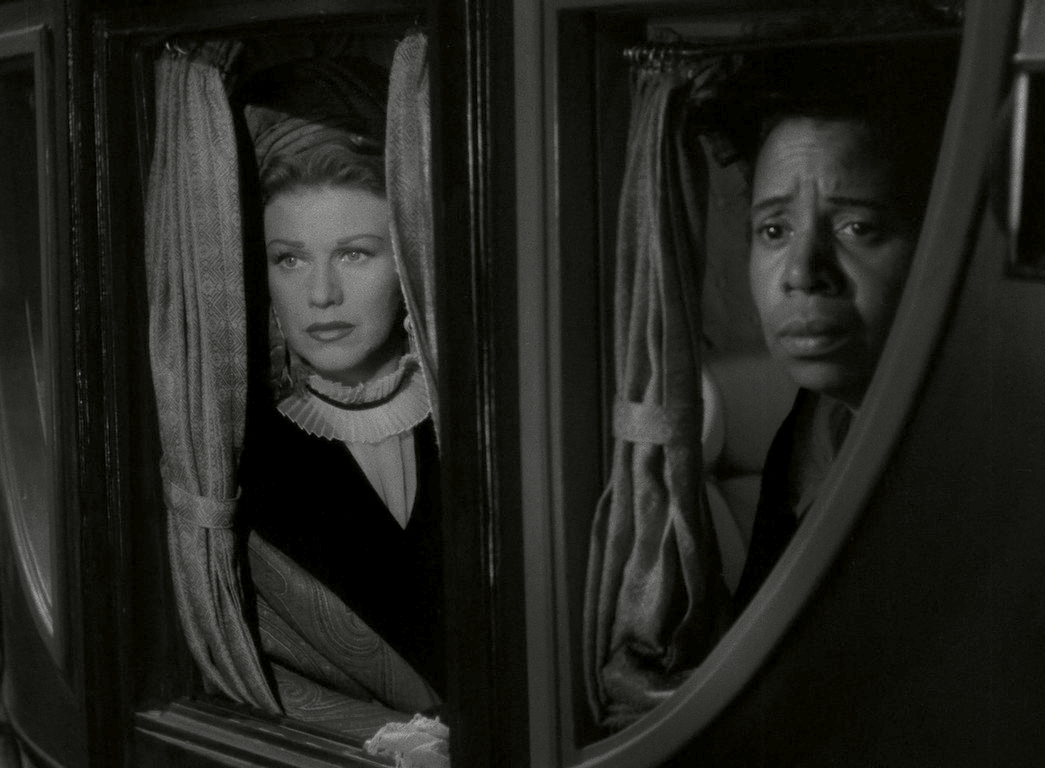 This was Irving Stone’s second screenplay, who’d go on to write Lust for Life (1956) and The Agony and the Ecstasy (1965), while Jack H. Skirball had already produced two films for Alfred Hitchcock: Saboteur (1942) and Shadow of a Doubt (1943). Alexander Golitzen was a resident art director at Universal Studios and this was just one of more than 300 films he oversaw. His work here evokes an authentic atmosphere, from the sparse Quaker interiors to the sumptuous ballrooms.

The opening credits confused me a little, as they appear over a portrait of Dolley Madison, only it’s clearly a photograph of Ginger Rogers in the frame. Then I realised the obvious anachronism must be intended to set-up audience expectations. This is going to be a lavish Hollywood costume drama, telling its story against the historic backdrop, not simply a retelling of history. Sure enough, it’s a very glossy production that takes several liberties with historic fact—and all the better for it! For instance, there’s nothing to suggest that the real Mrs Madison had any romantic connection with Aaron Burr. In reality, their ideals were so polarised, it would have been very unlikely, but this thread holds the narrative together and also allows casual dialogue between them to reveal their ideologies without getting preachy. 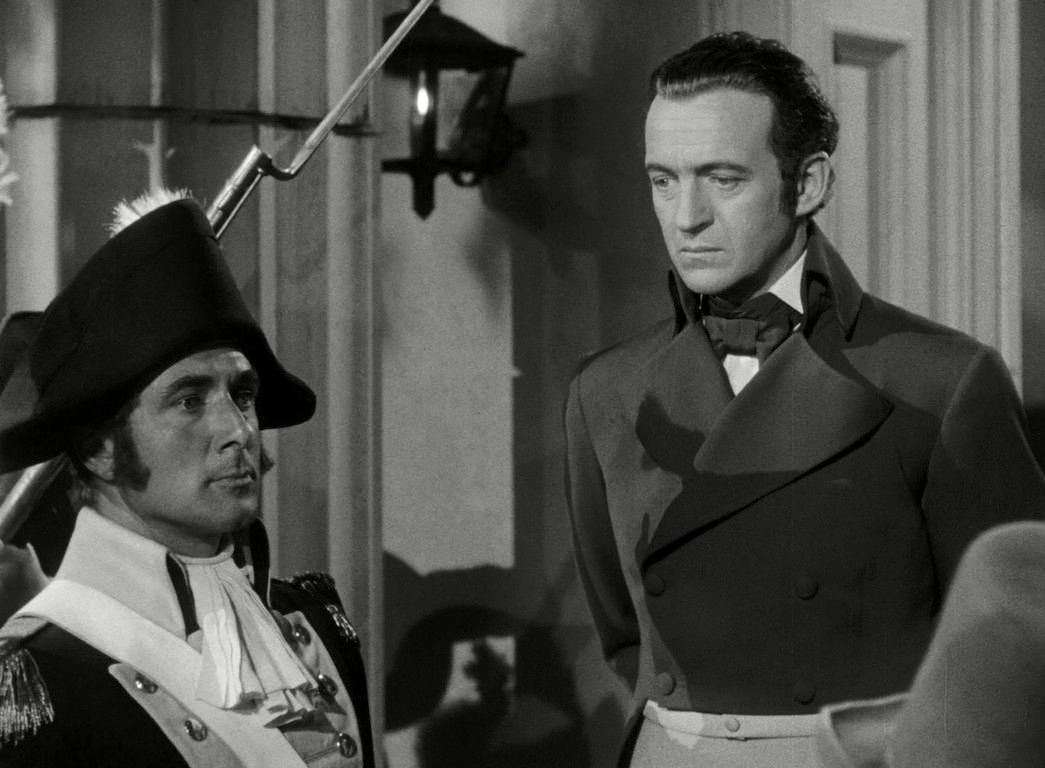 David Niven made A Matter of Life and Death (1946) that same year, and his characters couldn’t be further apart. Watch these two performances back to back and you’ll see how subtle and accomplished an actor he was. In A Matter of Life and Death, he portrays one of the most lovable screen heroes ever. In Magnificent Doll, he may start out charming, but soon his cheeky confidence turns to obnoxious arrogance and by the end of the film he’s despicable. That said, he doesn’t play Burr as evil, more like an idealist who has lost faith in his fellow humanity. Early in the film, he spouts Trumpisms such as “There’s too much talk about democracy nowadays, and too little purpose in rule.” By the end of the film he has become more extreme, with lines like “I want to sow hate and reap power.”

He also foreshadows Trump when he targets Mexico as a potential enemy and raises a militia to push back their borders, knowing full well that the government of the United States will attempt to stop his illegal insurrection. He hopes his rebel army will be forced to fight and overthrow the federal troops, allowing him to march on Washington D.C and proclaim himself ruler under martial law. This was a volatile period of history, only about twenty years after the revolutionary War of Independence with individual states still posturing for dominance over each other which, in another 50 years or so, would erupt into the Civil War.

Given the current political climate, this new Blu-ray from Arrow Academy is a most welcome release and, regardless of its many inaccuracies, should be compulsory viewing for history lessons in the USA! The new HD presentation is good and clear, showcasing the accomplished cinematography of Joseph A. Valentine, with the age of the print only ever apparent in a few slightly faded shots. There is also a new audio commentary by film historians David Del Valle and Sloan De Forest, and a limited-edition booklet with new writing on the movie by Nathalie Morris. Neither were accessible at time of review. All in all, a package that gives this fine film the respect it richly deserves. 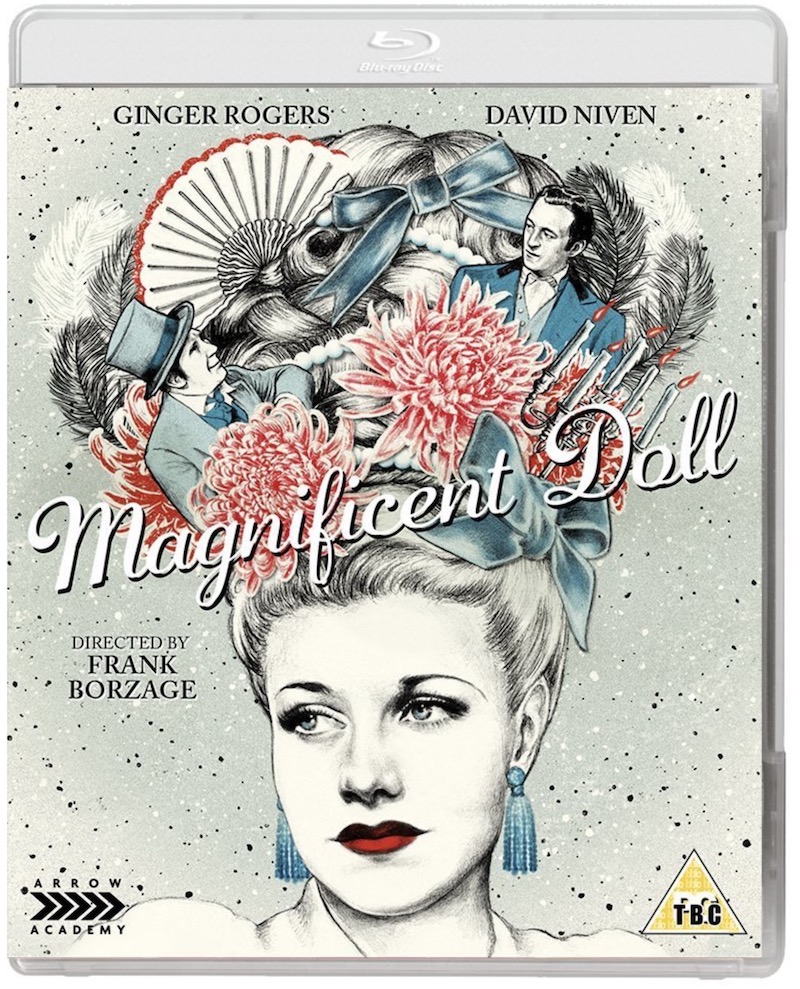