It’s been 25 years since Four Weddings and a Funeral was released and, looking back, it seems obvious it would become a huge box office success. The pedigree of talent, from screenwriter Richard Curtis (Blackadder) to director Mike Newell (Enchanted April), coupled with a cast including Hugh Grant, Andie MacDowell, Kristin Scott Thomas, and Rowan Atkinson… all working together on a romantic comedy? It sounds like a guaranteed gold mine.

Instead, it’s a wonder Four Weddings and a Funeral (hereafter Four Weddings) even got made. As the funding collapsed halfway through pre-production, causing a year’s delay (during which time they auditioned over 70 Englishmen for the lead, including Alex Jennings and Alan Rickman), and the film was eventually shot in just 36 days for a modest £2.7M. It wouldn’t have been surprising for this foul-mouthed rom-com to have bombed on release, only to become to a cult classic many years later.

The fact that Four Weddings managed to top the worldwide box office and become the highest-grossing British film of all time was a miracle, especially when you look at the year it was made. 1994 was a bumper time for the film industry; Four Weddings was nominated at the 67th Academy Awards for ‘Best Picture’ and ‘Best Original Screenplay’, only to lose to Forrest Gump and Pulp Fiction, respectively. Other films in contention for Best Picture were Quiz Show and The Shawshank Redemption. As for box office competition, top-grossing films released in ’94 included Disney’s The Lion King, and breakout star Jim Carrey’s double-whammy of Dumb and Dumber and The Mask. It was amazing that this UK rom-com made £245M and received so much critical acclaim. 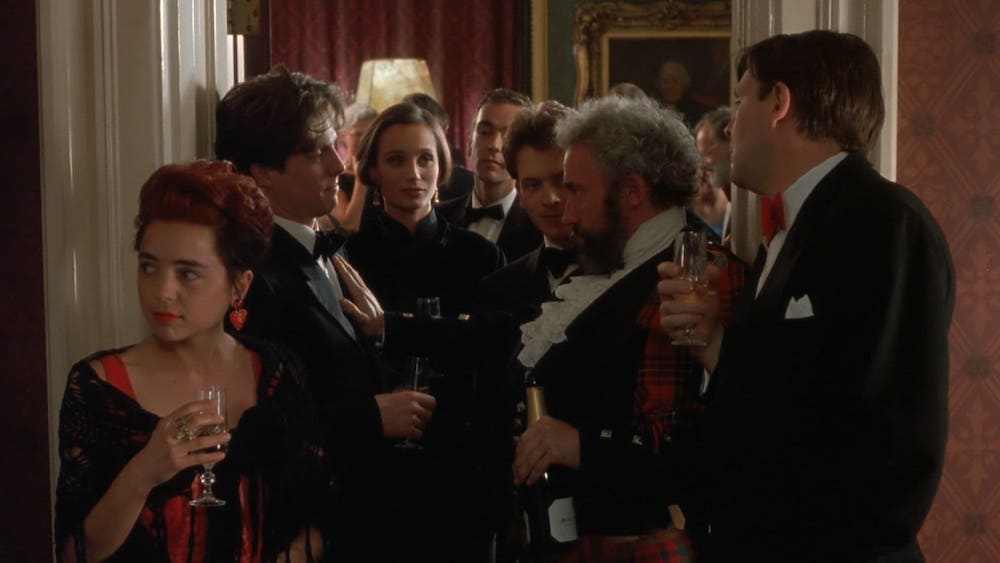 Four Weddings did receive a little help, however. One could say Four Weddings‘ success owes a debt to “that dress” Elizabeth Hurley (Hugh Grant’s then-girlfriend) wore to the premiere, or the incredible popularity of Wet Wet Wet’s cover of “Love Is All Around” (which is still the tenth Best Selling Single of All Time in the UK), but that would be doing a disservice to the film itself.

For a film cleared demarcated into five different sections, with each setting requiring a certain amount of exposition, Four Weddings and a Funeral is a 117-minute masterclass in visual storytelling. When we’re introduced to Charles (Grant) and Scarlett (Charlotte Coleman), they’re rushing to Angus (Timothy Walker) and Laura’s (Sara Crowe) wedding, where Charles is the best man. His frazzled look, tousled hair, and the crucial loss of the wedding ring (and the ingenious ‘solution’), craft a picture of someone who depends heavily on his friends. It’s barely 15-minutes in and the nonverbal communication on display is typical of a group of longtime friends who convey such a lot without speaking.

The dynamics within the group are quickly established, and keep the film grounded as the backdrops change. Grant, as we now know, was inspired casting because his own personality hewed close enough to Charles that it helped the film perform better at the box office thanks to his publicity trail. Kristin Scott Thomas and Andie MacDowell became big global stars, and the film shows their talents off spectacularly, but it’s a pity we didn’t get to see how far Coleman might have come as an actress. She died of an asthma attack in 2001, but here she lights up the screen every time she’s around. Coleman might have achieved Helena Bonham Carter-level status by now. 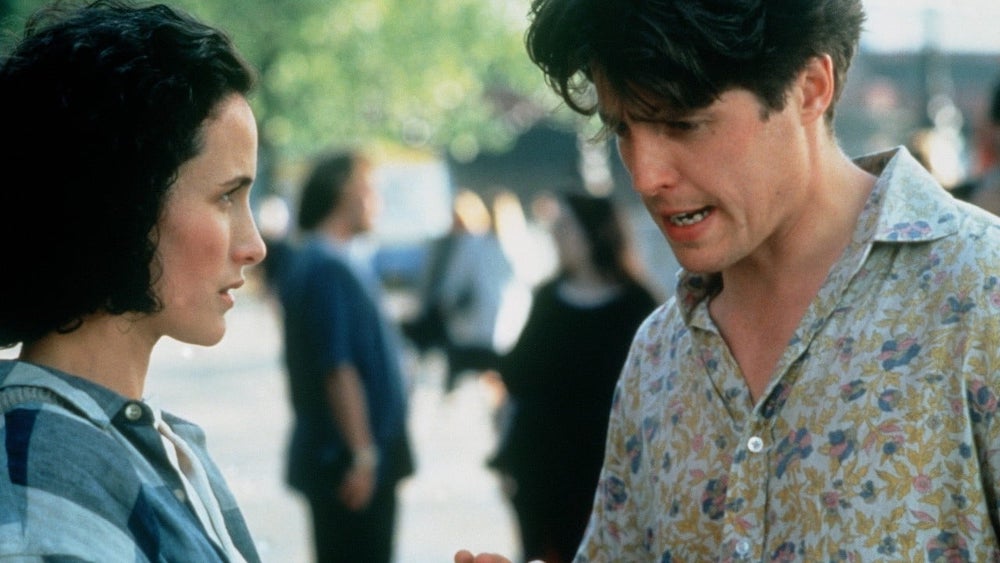 In terms of its premise, one would think that experiencing so many weddings would be boring and repetitive, but they’re such fabulously heightened social moments. The entire film takes place over one year, but you can see how each character expresses their changing emotional and physical states through their choice of clothing. The details of each wedding show a lot about the development of relationships; as we particularly enjoy seeing how each wedding brings together the same group of supporting cast members, with Angus and Laura managing their babies at the final nuptials. When you look back at the film, a quarter-century later, it becomes even clearer how weddings can be a wonderful snapshot of the time, and also how much bigger the wedding industry has come since the mid-1990s!

That level of visual detail is also present in the script, which helped dictate the comedic sensibilities of its era. The jokes are so obviously rooted in character that it makes the film flow smoothly, even during the funeral scene. You can feel everyone’s pain but, by that point, you also understand their need to make jokes to survive in awkward situations. The banter between the cast had become familiar and their conversations still feel genuine. The situations Charles and his friends find themselves in are timeless. We can all sympathise with having to sit with ex-lovers or be looking for someone to go home with at the end of a wedding party. 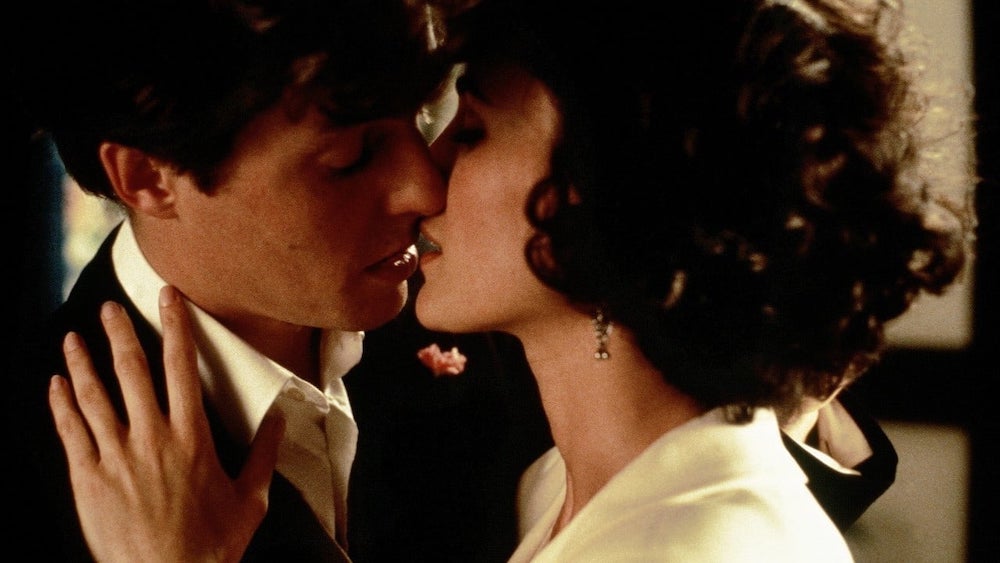 Will a new Hulu TV series on the horizon, executive-produced by Mindy Kaling and Curtis himself, live up to this movie’s legacy? It’s hard to tell. It’s fun to talk about the impact of the original today, however, when nostalgia is at an all-time high. The original cast is reuniting for Red Nose Day and a Wedding for Comic Relief 2019, and it’ll be interesting to see how Richard Curtis’s short TV sequel explains the futures of these memorable characters.

The original film is a beautiful snapshot of classic wedding ceremonies and their impact on our lives. It’s aged well, with the exception of its soppier moments, like the famous ‘kissing in the rain’ scene at the end. The story could also have provided its women with more substantial material, but Four Weddings and a Funeral remains an irresistible rom-com you’re cordially invited to watch.