Only Angela Zamparo (Toni Collete) believes her FBI colleagues should be looking for a white supremacist rather than a jihadist when caesium-137 makes its way into the US from Africa. With an attack using chemical weapons potentially weeks away, Zamparo sees shaving the head of nerdy agent Nate Foster (Daniel Radcliffe) and sending him undercover to infiltrate white supremacist groups as the only way forward.

Superficially, at least, Imperium appears prescient. White supremacy is on the rise in America, and the film makes the point that white supremacist and neo-Nazi killings are underreported in a way that never happens when atrocities are committed in the name of Islam. So, what makes them different? The film leans towards calling out this clear imbalance. But beyond the opening scenes, in which an immigrant walks into a terror trap concocted by the FBI before they discover he didn’t do much wrong, Imperium’s disinterested in probing below the surface. 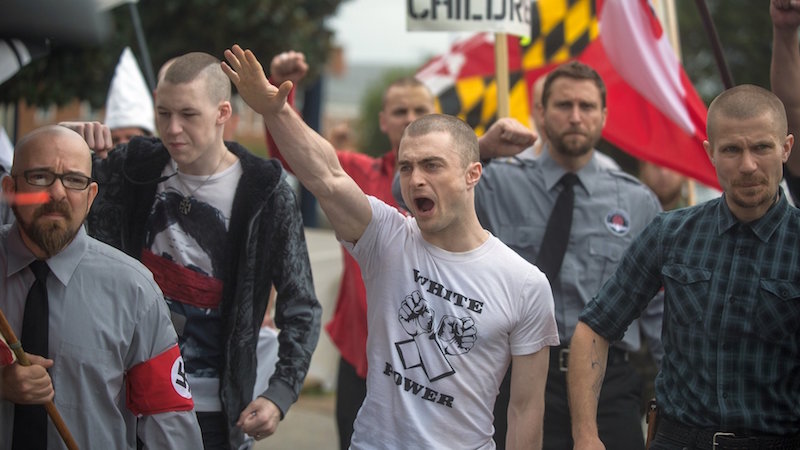 Another line of inquiry that comes off as horribly misjudged is how or why people become neo-Nazis in the first place. Its ultimate conclusion—that anyone can be sucked into white supremacy if they have a grievance or were bullied at school—is not only laughably reductive but also a platitude too many. It’s hard not to feel that when a reformed neo-Nazi youth gives a ‘don’t-make-the-same-mistakes-as-me’ lecture to a class of kids, the film and its filmmakers really think they’ve struck at the heart of the matter. Of course, they haven’t. There is next to nothing in Imperium that’ll leave viewers feeling like they’ve learnt anything about the problem of white supremacy in America.

The neo-Nazi stuff is only occasionally more than window dressing. However, there’s certainly a shock factor attached to watching Harry Potter casually firing off racial epithets like it was the most natural thing in the world. Although the film never succeeds in creating a lived-in reality out of the neo-Nazi subculture on-screen, Nate’s situation is developed well via increasingly escalating extremes. Mercifully, this is not the kind of film in which Nate starts to develop an affinity with the extremists he’s tasked with infiltrating. Free from such undercover thriller conventions, Imperium throws itself fully into Nate’s need to uncover the suspected terrorist plot while remaining a convincing white supremacist. 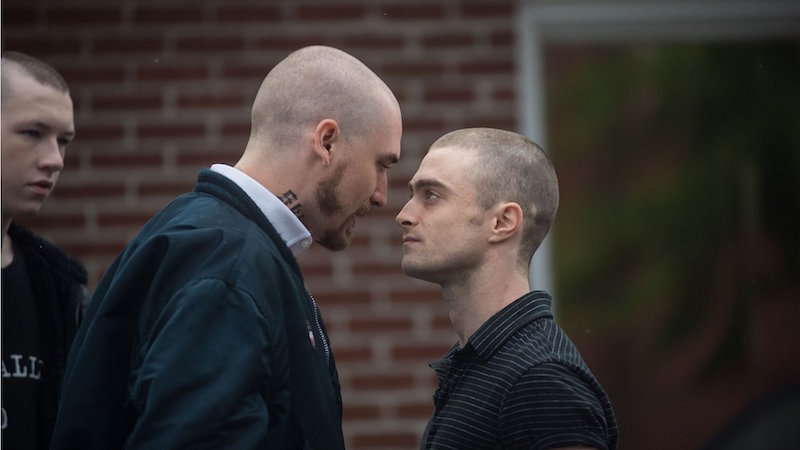 In one of the best scenes, Nate has to stop Roy (Seth Numrich)—a loose cannon and self-styled Aryan warrior—from killing a black man and the white woman he’s with. Shouting at them to walk away has to be both a warning and an extreme act of aggression. In Imperium‘s world, white supremacists are either skinhead thugs or middle-class family men who listen to Bach on their days off. Praise is deserved for moving beyond the clichéd neo-Nazi character we’ve seen so many times before. But Gerry Conway (Sam Trammell), the cultured, well-read racist, is hardly any more contoured or interesting than the cut-out thugs.

Nate seems to tour his way around every racist figure of prominence in the community, never having any trouble in doing so. He comes close to being discovered a few times, but nothing comes of these moments. At its best, Imperium throws up some interesting conversations and scenarios that can be appreciated in isolation. As a whole, the film’s lack of momentum and ceaseless ability to grab for the nearest cliché limits its impact. If ever there was a time for a thriller about this subject, it’s surely now. That the film only ever succeeds in scenes that could slot into any film about undercover police work speaks to its failure to make the most of its neo-Nazi premise.

Rent and watch IMPERIUM now at We Are Colony.