Julian Fellowes was asked to create an Edwardian-era TV drama in the vein of his Academy Award-winning film Gosford Park (2001), so it’s fitting his Emmy-winning series Downton Abbey has come full circle with its own movie. Already a high-quality production from Carnival Films, the transition to the big screen is seamless and possibly unwarranted, as Downton Abbey: The Movie could easily have been a two-hour Christmas special. Fellowes even crams in subplots that would’ve been better served over a season of television, as a few incidents are raised and resolved in less than a half-hour. Although that happened in many of the TV episodes, too.

The focus of Downton Abbey (which I’ll now refer to the film as) is on the arrival of King George V (Simon Jones) and Queen Mary (Geraldine James) with their daughter Princess Mary (Kate Phillips) as part of their royal tour of Yorkshire. That’s certainly a big idea that seems worthy of a movie to tackle but, honesty, it results in much the same sort of drama that arose from TV episodes involving important dinner guests and important event planning. The household staff are giddy with excitement over their blue blood visitors, particularly Mr Molesley (Kevin Doyle), who slips on his old livery to become a footman again for the occasion, and much of the narrative concerns the planning and setbacks that arise from having the King and Queen come for tea.

As a “sequel” to the TV series (that ended in 2015), there are a few narrative adjustments that have to be made to get Downton Abbey back on a familiar footing. The biggest involves getting retired butler Mr Carson (Jim Carter) back in charge of the servants, now younger Mr Barrow (Robert James-Collier) has assumed the estate’s top job. This is dealt with rather well, all things considered, as it makes sense Carson’s vast experience would result in Lady Mary (Michelle Dockery) having more faith in his abilities to organise a VIP visit. And when the royals do appear, the clash between Downton’s servants and the royal household staff—led by snooty Mr Wilson (David Haig), Royal Page of the Backstairs—-is enjoyable to watch unfold. One senses the disappointment when the character’s delight turns to disappointment once Downton’s big day is taken over by snobby interlopers like Monsieur Courbet (Philipe Spall).

Not everyone gets a decent storyline to work with, sadly, even with 122-minutes to work with. Lord and Lady Grantham (Hugh Bonneville, Elizabeth McGovern) don’t factor into any meaningful plot of their own, and one would be forgiven for forgetting Mr Bates (Brendan Coyle) is even there! It seems odd when even undercook Daisy (Sophie McShera) has more material to work with, even if that only involves taking a shine to a sexy plumber and making her boyfriend jealous. Branson (Allen Leech) dominates the bulk of the narrative; first as part of a mystery involving attempted regicide, then with a new love story involving Lucy Smith (Tuppence Middleton), the beautiful maid of Lady Bagshaw (Imelda Staunton), the Queen’s lady-in-waiting, who’s the cousin of the Dowager Countess (Maggie Smith) and intends to give her inheritance to Lucy instead of a relative like Lord Grantham. And while Barrow gets ejected from the main story once Carson replaces him as the butler, there’s an interesting if short-lived storyline where he goes to York and is taken to an illicit gay nightclub that gets raided by the police.

If you’re not already a fan of Downton Abbey, it’s possible to enjoy this film on a basic level because we’re all familiar with period shows with similar characters and archetypes, like its antecedent Upstairs, Downstairs (1971–75). But it clearly works better for those who’ve followed these character’s lives over six series, covering 1912–1925, so are heavily invested and knowledgeable about the wealth of backstories. It’s hard to imagine someone who hasn’t seen Downton Abbey wanting to watch this movie, and you’re certainly doing yourself a disservice if it’s the kind of thing you would enjoy… as there are 52 episodes to sink your teeth into beforehand! Go watch them first and thank me later.

The jump from the small screen to the big one isn’t stark (although I’m seeing this on a TV), although one notices more opulent backdrops and fancier aerial shots. But after an opening sequence showing the journey of a royal invite from a desk in Buckingham Palace to Downton Abbey, via train and automobile, passing through various hands, there isn’t too much here that strikes you as cinematic in scope. But that’s more a testament to how well the TV series utilised a budget far lower than the $13–20M this cost. The film is essentially a two-hour continuation of events, forced to condense stuff down that would have breathed better over more hours of screentime. But it doesn’t feel rushed and (almost) every character has a moment to shine.

Downton Abbey grossed $192M at the worldwide box office and a sequel was recently announced. There will come a time when historical fact will get in the way of continuing a story involving the aristocracy and their servants, but the script wisely set up a few areas for a second movie to explore. One wonders why they didn’t just keep the TV series going for longer, really, but one assumes it was becoming an annual grind Fellowes wanted to avoid and the actors wanted to move onto other things by cashing in on its success. (How’s that working out?) At least as a series of occasional movies, fans can continue to visit this idealised vision of classic British culture and nobility; it’s a fantasy built for Sunday evening TV, and now the movie makes for a comforting Sunday afternoon with a cuppa. 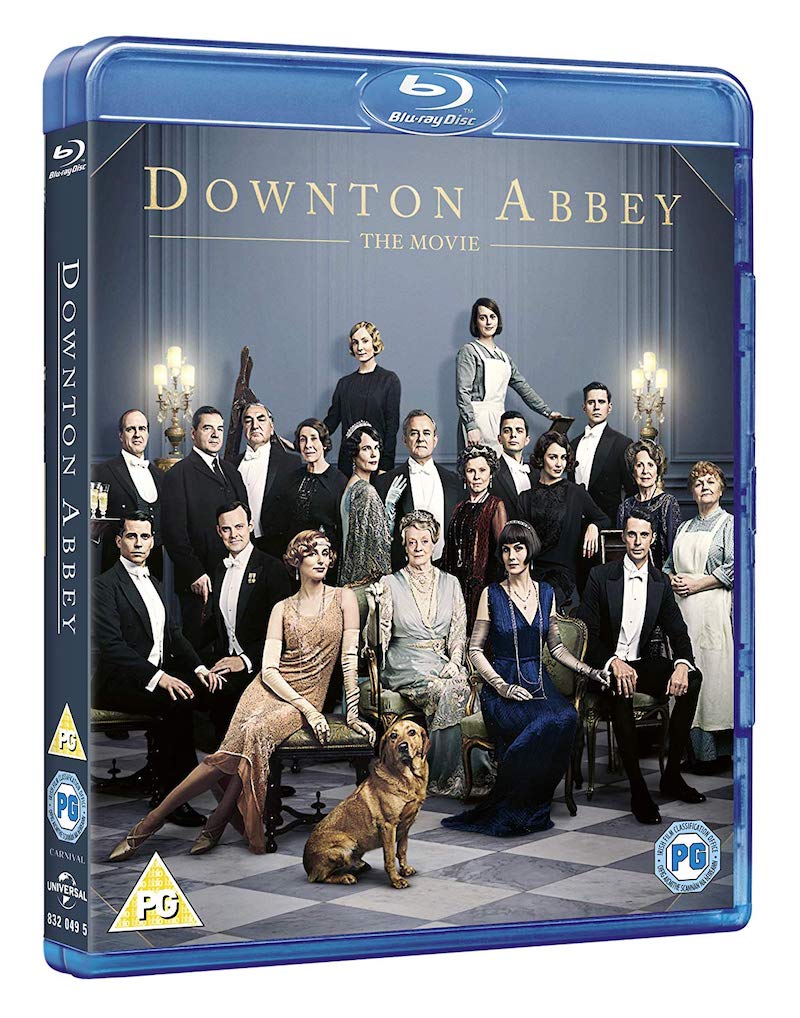 Michael Engler shot Downton Abbey digitally with the Sony CineAlta VENICE in a lush 2.40:1 aspect ratio, and it’s a great transfer onto 1080p Blu-ray. The television series already looked slick and prestigious (shot on the Arri Alexa, in 1.781:1 ratio), but the bigger budget and a more cinematic scope help give the look of familiar sets and locations a modest visual boost. The colours and details are excellent, particularly in scenes outside, with deep blacks and natural skin tones.

The soundtrack is presented in DTS-HD Master Audio 7.1, and it’s a good mix with enough happening around the speakers to keep one immersed in the hustle and bustle of Downton Abbey itself. The atmospherics aren’t going to rouse you from your seat, and there aren’t any demo-worthy moments to show your friends (obviously!), but the DTS track does a commendable job of easing you into this 1920s world.

The extra features are serviceable PR fluff, which could easily have been combined into a slightly more worthwhile half-hour documentary. 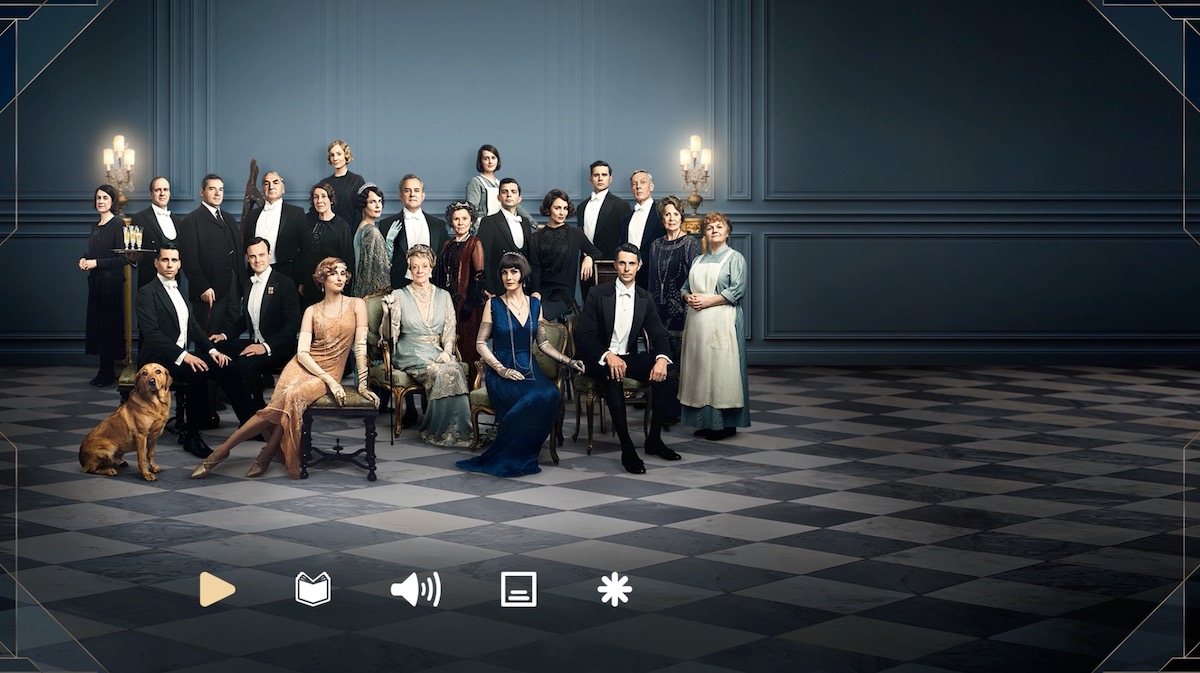