Broadway Danny Rose is another beloved film that both public and critics praised. Despite the similarities, it’s not to be confused with Bullets Over Broadway, starring John Cusack (which was released 10 years later, in 1994), but both are about the American showbiz industry and involve protagonists who have unfortunate yet hilarious encounters with the Italian mafia. In Bullets, John Cusack was a struggling playwright, while Danny Rose (played by Allen) is a helpless talent manager, constantly juggling embarrassing and talentless clients — like a blind xylophone player, a one-legged tap dancer, and an old couple of balloon folders. 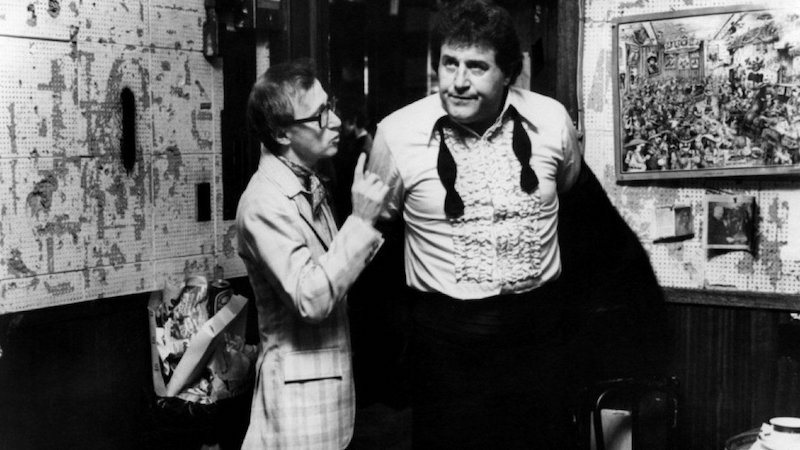 Danny himself is not the exemplification of a successful life, as even his fiancée ran away with a piano player (so he “broke off with her”), but he’s a good man completely dedicated to his job and doing the best he can to support his clients. And this job includes picking up Tina (Mia Farrow), mistress of Lou (Nick Apollo Forte), one of his biggest clients, a washed-out singer planning a comeback to the stage. Danny is taking Tina to what promises to be Lou’s biggest gig in years, but here’s the first catch: Lou’s wife will also be there, so Danny has to pretend that Tina is his girlfriend and avoid arousing suspicions about Lou’s affair. The second catch is that Tina’s former boyfriend is an extremely jealous Mafioso, part of an Italian family of New Jersey mobsters. A typical Allen-esque charade ensues: the mobsters believe Danny to be Tina’s real boyfriend, and plot to get him whacked, while Lou has a hysterical breakdown that jeopardises his performance. 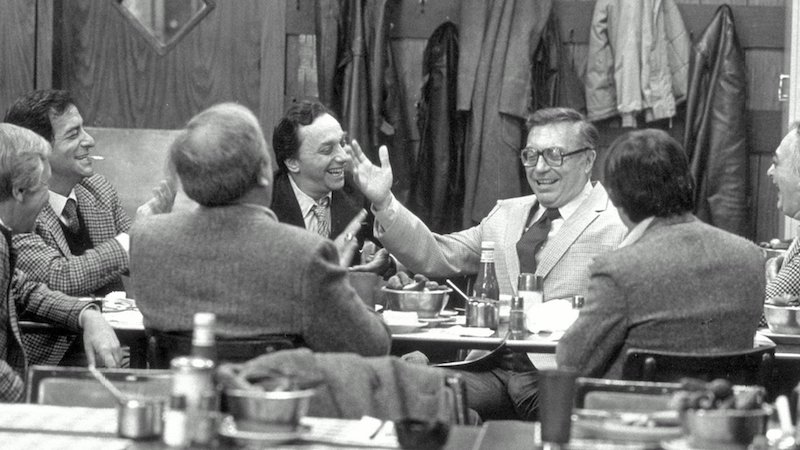 Broadway Danny Rose is a story-within-a-story, recalled by a bunch of showbiz old-timers having lunch at Carnegie Deli. They talk about Danny Rose like you would talk about that old guy from your hometown who’s “such a character”; it’s a mix of mockery and sympathy, a good ol’ anecdote that you’ll remember with affection, and that will never cease to make everyone laugh. Among all of Allen’s protagonists, Danny Rose is probably the sweetest. He’s less of the typical schmuck—like Larry David’s character in Whatever Works (2009)—and more of a schlimazel, the Yiddish comic figure of the loser (canonically, the one who gets soup dropped upon him, as opposed to the schlemiel, the clumsy one who drops the soup). His misadventures flow flawlessly, happening almost spontaneously. It even feels like some of the gags are improvised; even so, they’re consistent and work brilliantly—with perhaps one or two exceptions, like the escape from the diner in New Jersey.

Moreover, as opposed to many of Allen’s comedies (even the most lauded ones), all the jokes and quips are well embodied in the script, so enrich the dialogue and the characters rather than just get rattled out for an offhand laugh. The interpretations, too, are very memorable, from the irresistible Forte, to the inimitable, ever-growing synergy between Allen and Farrow, here undertaking their third project together. On the other hand, writing a completely convincing finale has never been the American director’s speciality, and Broadway Danny Rose is no exception. Nonetheless, it’s rightfully remembered as one of Woody’s all-time classics.

THE UNBEARABLE WEIGHT OF MASSIVE TALENT (2022)