Andy Serkis’s directorial debut, Breathe, perhaps isn’t the film many would expect from the motion-capture pioneer. Serkis is, of course, best known for his work as the actor behind such incredible digital characters as The Lord of the Rings’ Gollum, and Caeser in the re-imagined Planet of the Apes trilogy. Breathe features no such technical marvels, but his debut is rather a provincial weepy; an emotional biopic about Robert Cavendish, who at the age of 28 was struck down with polio and paralysed for life.

Based on a true story (this film’s produced by Robert’s son), Breathe opens with the whirlwind romance of Robert Cavendish (Andrew Garfield) and Diana (Claire Foy). Their perfect life together is shattered after Robert’s struck down with polio while holidaying in Africa, finding himself paralysed from the neck down and unable to breathe without the help of a ventilator. Given only three months to live, Robert ultimately survived until the age of 64, and through his spirit and innovation, revolutionised the way disabled people are treated the world over.

Serkis’s debut at times boasts the same cheeky glint in its eye that Garfield uses to great effect throughout. The opening sequence of genteel life in 1940s England, as we witness Robert and Diana falling in love, is absurdly perfect. It’s the sort of picture postcard Britain where people play cricket on the village green, and everybody speaks the Queen’s English. It’s an archetypal image of quaint Englishness, and it would almost be laughable if you didn’t have a sense that Serkis knows full well what he’s doing.

The devastation that hits when Robert falls ill is intensely moving, and the colour palette of the film changes accordingly; sun-kissed ambers fade to dreary greys, and the bliss of that earlier perfection is soon forgotten. From this point, Garfield has only his face to act with, and he does a remarkable job rising to that challenge. His expressive eyes and goofy grin are used to great effect, and you’ll have to be made of stern stuff not to be affected by his performance. Claire Foy, as his devoted wife, is also great. Her refusal to let the man she loves give in to his darkest thoughts makes her the backbone of the film, with Garfield providing the pathos. Her determination rubs off on Robert and, with the help of a few friends, they liberate him from his prison-like hospital and take him home. Something unthinkable to the doctors of the time. 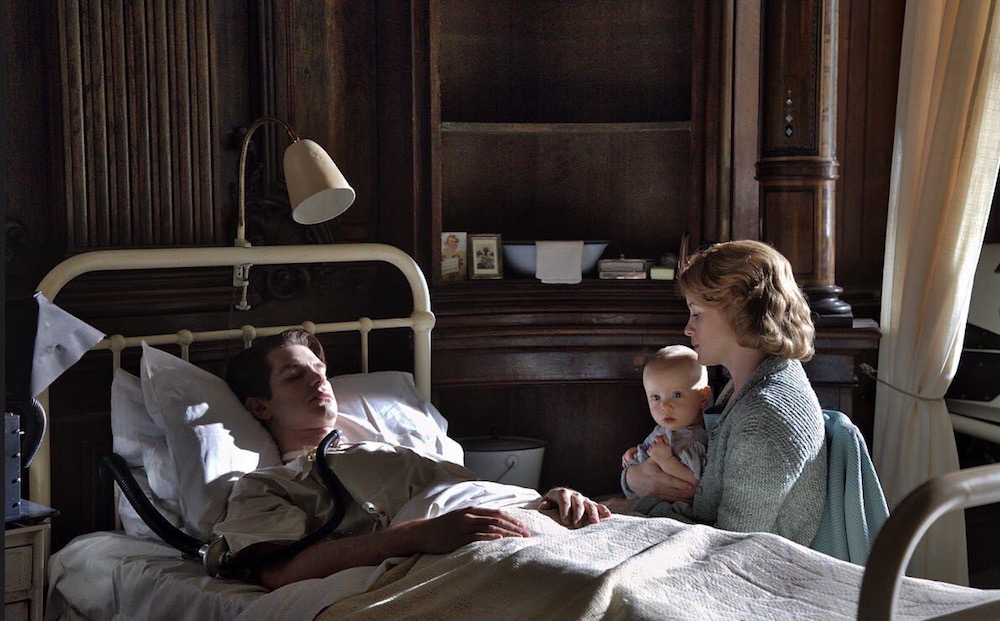 With each new facet of his life that Robert achieves or regains (leaving the hospital and seeing blue skies again, becoming mobile in his newly invented wheelchair, even going abroad to Spain), Garfield’s infectious elation hits you over and over again. It’s as joyous as it is heart-breaking.

However, while the two leads are terrific, Serkis takes a colossal misstep with Tom Hollander’s characters. Yes, plural. Holland takes the role of twins, two close personal friends of Robert and Diana. Their bumbling is presumably supposed to act as comic relief, but their every appearance is excruciating. Perhaps Serkis got the idea from Thomson and Thompson while working on The Adventures of Tintin (2011), but caricatures like this should have stayed in cartoons. It’s not Hollander’s fault — the problem lies in the conception. The twins are awful, and if they don’t quite derail the film, it’s a close-run thing at times.

And while Breathe is peppered with moments of peril for Robert, the story on the whole feels rather sanitised. The occasional instances of jeopardy (like his ventilator becoming accidentally unplugged), are appropriately and suffocatingly intense, but the film neglects to depict the daily grind of life for the Cavendishes. With all their money and resources, and a convenient circle of friends to help them with everything from travel plans to wheelchair innovation, their life actually seems rather comfortable. Skipping the daily realities of Robert’s life maybe makes for a gentler, lighter film, but it’s difficult to believe that this was the reality of their lives.

Take the family trip to Spain, during which Robert’s chair malfunctions in the wilderness and the family take turns manually pumping the bellows that work his lungs while they wait for help. Before long, a mini-festival has sprung up around them, as the locals flock to witness the strange English contingent, bringing food, music, and general good times. It’s a nice sequence, but it’s a fantasy; a deliberately painted ideal of a world where everyone’s nice and even the worst situations become celebrations. It’s like the earlier vision of idealised Englishness — pleasant, but difficult to take seriously. 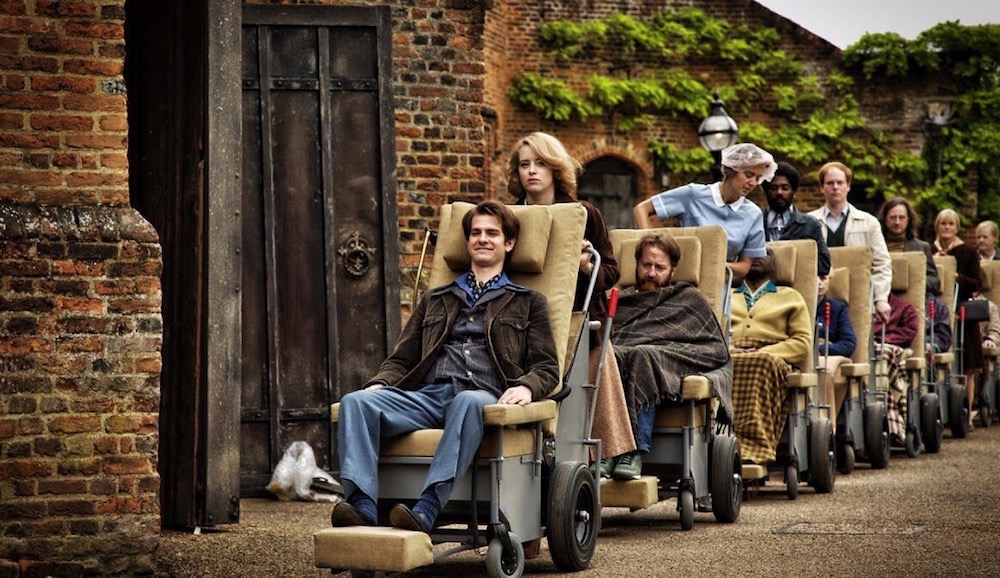 Still, one shouldn’t fault Serkis for focusing on the lighter side of this inspirational story. What Cavendish achieved for disabled people is remarkable. Seeing how simple innovations like a wheelchair with a ventilator attached change someone’s life so dramatically is hugely uplifting — even as it boggles the mind as to how nobody thought of it sooner.

And if the hospital Robert eventually escapes from is bleak, it’s nothing compared to the “revolutionary” German facility for disabled patients that Robert visits in the film’s most striking moment. Supposedly a state-of-the-art care facility, it presents the genuinely startling image of paralysed people existing like battery chickens. It’s a chilling image that lingers long in the memory, and emphasises just how much disabled people during this time needed a pioneer like Robert.

By the time Robert gives his centrepiece speech to an assembled conference of medical professionals, you’re entirely behind him, and any frustrations with the film’s safe nature have dissipated. Garfield’s rousing oratory is the sort of speech that’s all the more impactful for being relatively simple.

Robert’s desire not just to survive, but to truly live, is an easy-win story, and Breathe will doubtless charm audiences as much as it’ll have them weeping in the aisles. With polio very close to becoming the second disease to be completely eradicated by humans, this film’s a reminder of how far medicine and the treatment of disabled people has come in a relatively short space of time.

Breathe isn’t likely to be the most memorable aspect of Serkis’s career, and there are certainly mistakes made he can learn from, but it’s a very solid debut. If he develops a taste for getting behind the camera, you sense there could be some interesting movies to come from the master of mo-cap.