It’s easy to scoff at the suggestion one of the best shows on Netflix is an animated comedy about an anthropomorphic horse. You shouldn’t, though, because BoJack Horseman is a series of unexpected depth you’d be unwise to ignore. It may seem unlikely that such a niche premise—about a washed-up 1990s sitcom actor/horse (voiced by Will Arnett) dealing with depression—can live up to the critical praise. But few other shows are as inventive as BoJack Horseman, or better at balancing inventive and hilarious humour with sharp character deconstructions, tragic storytelling, and beautiful animation.

Despite being set in a world filled with animals, BoJack Horseman tells some of the most strikingly human stories on television, and that remains true in its tremendous third season. This year takes the character of BoJack to some of the darkest places he’s ever been and does a great job of twisting the knife just when you think he can’t possibly self-sabotage anymore. Without spoiling any of the surprises, this season also takes steps to make it clear that BoJack can’t go on like this for much longer. Considering the consequences of his actions across these twelve episodes, it’s difficult to imagine the already commissioned fourth season allowing him to spiral much further without attempting to pull himself together. 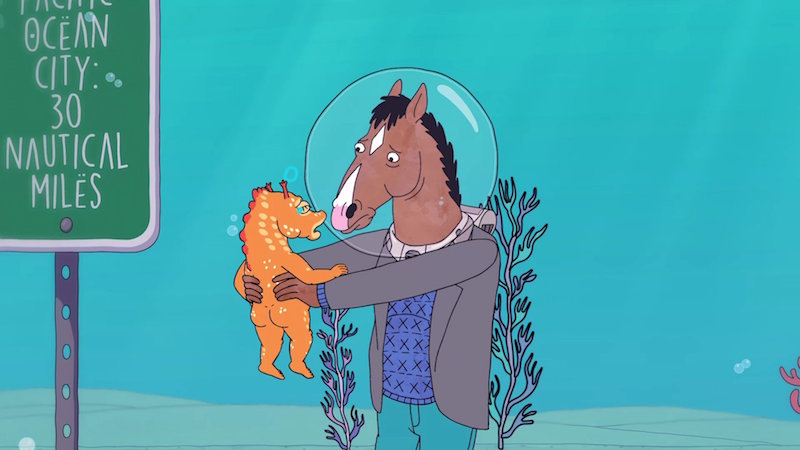 The backbone of this year’s narrative is BoJack trying to win an Oscar after his acclaimed performance in Secretariat, which was revealed at the end of last season to have been achieved through digital effects. It’s unsurprising, given what we know about him, that BoJack would look at the potential of winning the award as something that finally could enable him to feel happy—but both the audience and the other characters know well that it won’t solve his problems. In any case, the Oscar race is a narrative that enables the show to continue its gags about the quirks of Hollywood while putting the main character in a position where he’s pushing his friends away and dismantling his own support system.

Ana Spanakopita (voiced by Angela Bassett) plays a key role as BoJack’s ruthless publicist, and we see from the season premiere how he’s ruining a press junket and how she’s cleaning up the mess. The show moves other characters into BoJack’s orbit from the start, with him being Princess Carolyn’s (Amy Sedaris) most important client at her new firm, and with Diane (Alison Brie) running his social media campaign. Bringing characters closer to him is just one way the show makes it all the more heart-breaking when BoJack inevitably wrecks his relationships; it’s particularly wrenching in the brutal “Best Thing That Ever Happened”, which puts a spotlight on BoJack and Princess Carolyn’s professional dynamic, and how they relate to each other as exes. 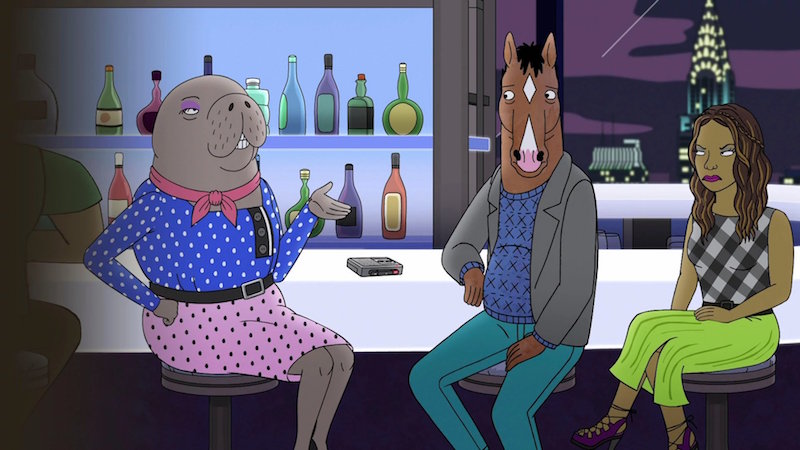 Thematically, this season spends much of its time concerned with the idea of the legacy you leave behind and the importance of what people think of you and your achievements. BoJack frequently defends his ’90s sitcom Horsin’ Around, the reason he’s famous in the first place, while others urge him to move on from the past and focus on being a more serious film actor. All this talk of the past speaks to how obsessed BoJack is with the work he’s done and whether it is good enough or respected enough. It’s all interspersed with hilariously self-aware flashbacks to 2007, where we see BoJack creating a comeback show, The BoJack Horseman Show, that’s as risky as it is terrible. Another insight into how desperate he is to have people recognise that he’s more than just a sitcom star.

The most impressive episode, as you may already know from widespread praise online, takes place entirely underwater and is almost completely silent. In “Fish Out of Water”, BoJack heads to a film festival under the sea and finds himself unable to speak to anyone through his protective helmet. The lack of dialogue challenges the animators to come up with innovative ways to fill the episode with laughs and emotion, and it excels in both respects. It’s an incredible episode, written and animated so wonderfully, and its exploration of BoJack as a potential father figure may hint at the show’s future direction. 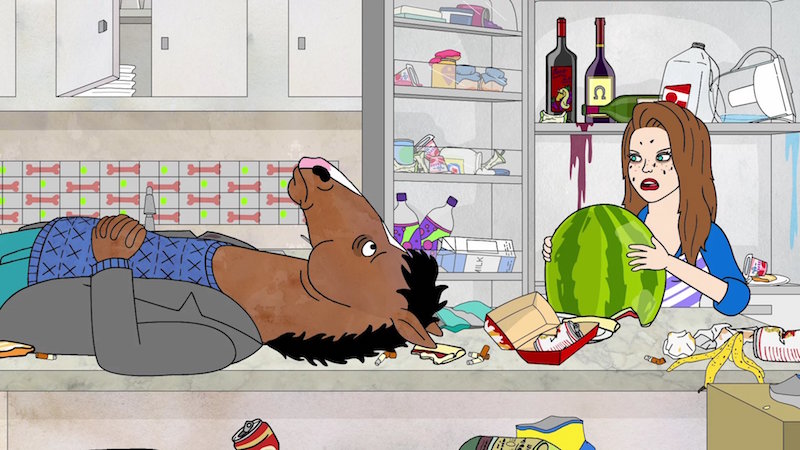 The sharp and often very niche humour of the show is reminiscent of 30 Rock, but as a character study BoJack Horseman ‘s likely to remind you of Mad Men. Its title character shares many of Don Draper’s characteristics, including a propensity to push people away and run from problems. This show is also similarly skilled in how it builds to an emotional blindside, something as true for BoJack as it is for the other great characters in this ensemble. It’s in the penultimate episode of the season that BoJack truly gives in to his destructive tendencies more than ever has before, though, and it makes for difficult watching seeing him be his most self-centred as the character is thoroughly deconstructed.

While this might be one of Will Arnett’s most impressive roles ever, the talent of this entire voice cast is nearly unparalleled; with Sedaris and Brie bringing depth to their characters, while Aaron Paul delivers a terrific performance as BoJack’s roommate Todd. Mr Peanutbutter (Paul F Tompkins) is reliably brilliant as a prevalent source of comic relief, too. When it comes to guest stars, Fred Savage, Candice Bergen, “Weird Al” Yankovic, Margo Martindale, and Abbi Jacobson are just some of the impressive names to lend their voices to this season.

In the end, the third season of BoJack Horseman is all about how hard it is to break out of the cycle of depression, and the consequences not only for BoJack but for everyone around him. The show could easily feel like it’s going in circles with this type of story, but by handling mental heath in a nuanced way and committing to such complex personalities, it’s able to achieve something even better than its magnificent second season. It does all this while managing to be one of the funniest and most sharply satirical shows around. It’s that unlikely balance of humour and character-based storytelling, that makes BoJack Horseman such a unique and rewarding series.