What do two sisters with opposing views on music, the world’s biggest pop star, and an A.I doll have to do with each other? As it turns out, Black Mirror doesn’t have an answer for that in its half-baked series 5 finale.

“Rachel, Jack and Ashley Too” introduces us to Rachel (Angourie Rice), a lonely teenager who cuts herself off from her classmates because she’s constantly listening to pop idol Ashley O (Miley Cyrus). Then Ashley announces the release of an A.I. doll programmed with her personality, aptly named ‘Ashley Too’, so Rachel gets one as a 15th birthday gift from her father, much to the annoyance of her older sister Jack (Madison Davenport). Ashley Too encourages Rachel to dance to one of Ashley O’s hits for a school talent show, but the performance doesn’t go well and only leads to public humiliation. 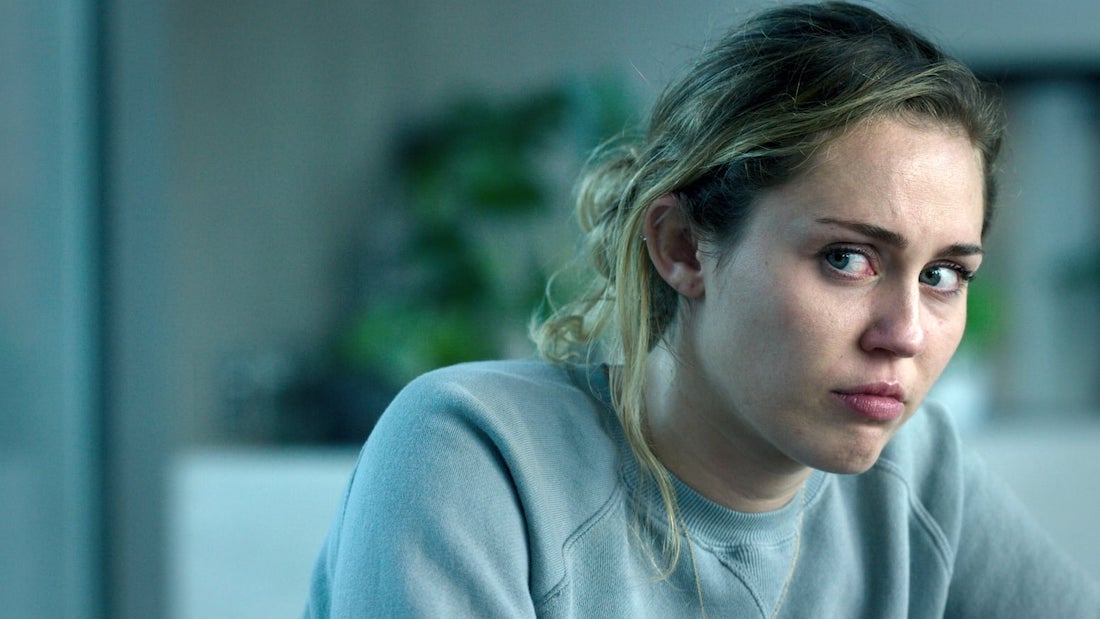 While all this is happening, Ashley O’s struggling with her own problems. Her manager and aunt, Catherine (Susan Pourfar), treats her like a product instead of a young woman with undoubted talent. When Ashley confronts Catherine about her mistreatment, the ice-cold businesswoman puts her niece in an induced coma, in order to keep the money rolling in by mining her brain for new songs.

How do these two storylines collide? Well, it’s complicated. Months after the talent show debacle and news of Ashley O’s coma, Rachel’s Ashley Too doll malfunctions and requires a reboot… after which Ashley O’s entire personality is unlocked and the comatose singer’s essentially replicated in tiny robot form. This sequence is ripe with comedy, but it comes with its own set of problems. When Ashley Too loses her public persona filter, the humour of the situation increases and the emotional weight of the story quickly dissipates. The teen sisters undertake a heist, of sorts, to help the real Ashley escape her coma, but the entire sequence falls flat. An ensuing car chase is full of high energy and comedy but feels wholly unnecessary. And then the episode ends abruptly and much too easily, almost as if it ran out of time, leaving half the plot threads unresolved. 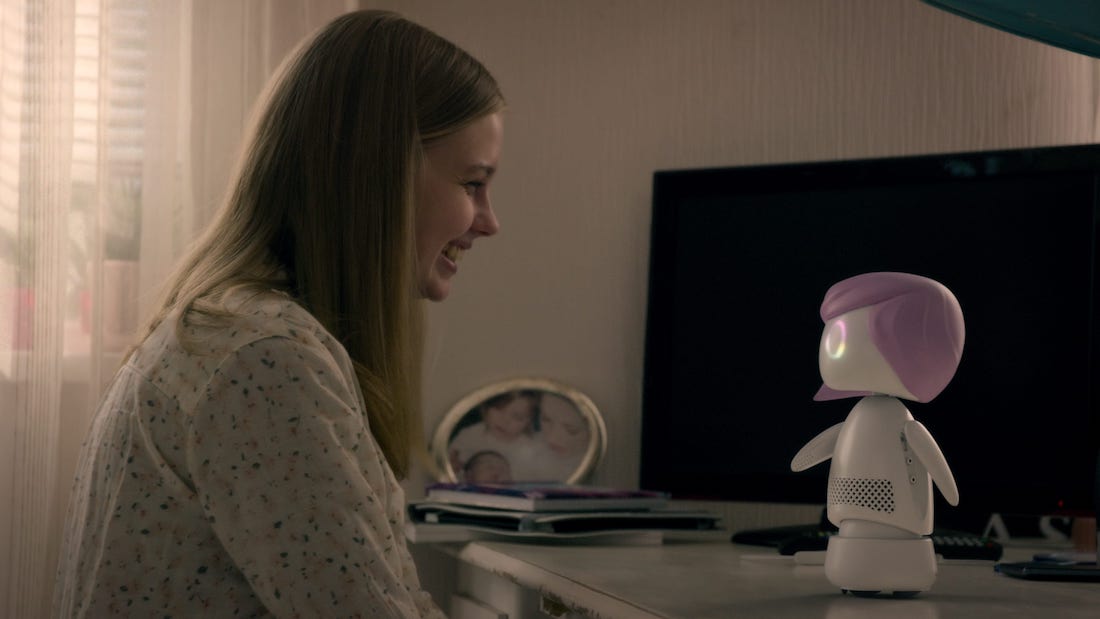 Black Mirror creator Charlie Brooker, who again wrote this episode, has a lot on his mind here. The episode is, at different points, a critique on positivity culture, the music industry, and the exploitation of celebrities in life and death. His scope is admirable, but all these critiques never delve beneath the surface. Brooker has so much to say he ends up saying very little.

That said, “Rachel, Jack and Ashley Too” isn’t irredeemable. Miley Cyrus delivers a performance that proves she’s as good an actress as she is a songwriter. She brings a lot of her personal experience to the role of Ashley, selling the false public persona and the miserable woman behind the facade so well one wonders how much of the real Cyrus is up on the screen. Every time she’s around (in person, or while voicing Ashley Too), the episode comes alive. 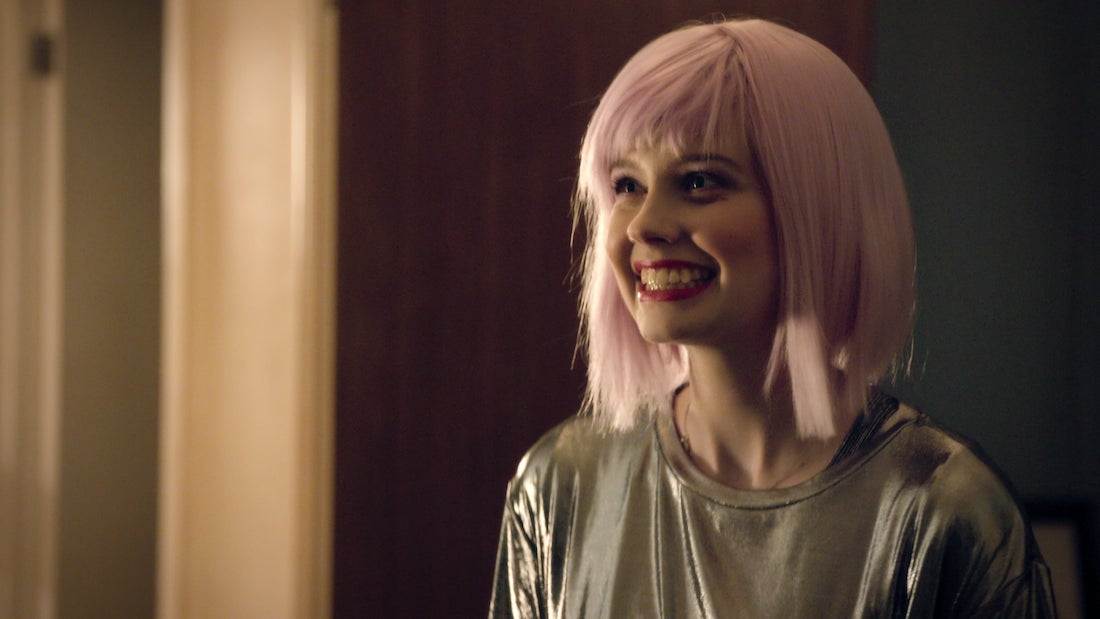 The other two young actresses, Rice and Davenport, are believable and empathetic as mismatched sisters living with a widowed father, but they don’t get much to do. They argue for the first half of the episode before suddenly becoming best friends in the second half. An unresolved plot thread involving their neglectful father is present for no clear reason.

The set design is also great, the best of which can be seen in the sister’s shared bedroom. The lighting, decor, and colour scheme tells us everything we need to know about these two girls before they even say a word. Ashley’s luxury home is also a highlight; a sleek and beautiful structure that reeks of showbiz success. It all looks fantastic but, much like Ashley O’s public image, they ring hollow.

“Rachel, Jack and Ashley Too” isn’t one of the best Black Mirror episodes, but it’s not without merit. The concept would’ve worked better as a whole season of TV, with time to develop the themes and characters more, but as a 70-minute story, it leaves a lot to be desired. But it’s worth a watch—if only for Miley Cyrus’s performances and the excellent Nine Inch Nails covers.