As we ease into the second half of Better Call Saul’s sophomore year, it’s becoming clear that Jimmy McGill’s (Bob Odenkirk) storyline isn’t a strong as his occasional partner-in-crime Mike’s (Jonathan Banks). I’ve had concerns about this being the case before on the show, but I think season 2’s highlighting the split more because the writers are giving Mike far more exciting stuff to do—and in a hour like “Bali Ha’i”, it was noticeable just how secondary Jimmy felt to everything of real importance. Indeed, now that Kim’s (Rhea Seehorn) getting more attention as a character, there were times when Jimmy felt very marginalised.

Of course, there will always be occasions Better Call Saul’s poster boy isn’t the primary focus of everything happening—but I think I’m worried because there’s no obvious way to move the narrative on with Jimmy right now, as we’re just waiting for him to accept he’s incompatible with a company like Davis & Main and leave to go solo again (presumably with loftier ambitions than a cupboard office at a nail salon, which he’ll pay for by doing dodgy legal work). To a large degree, both Mike and Jimmy are characters whose arcs are predetermined because this show is a prequel, but the writers really need to find ways to keep me surprised by what Jimmy’s up to, as they’re managing to with how Mike’s world broadens and deepens much of the Breaking Bad universe. 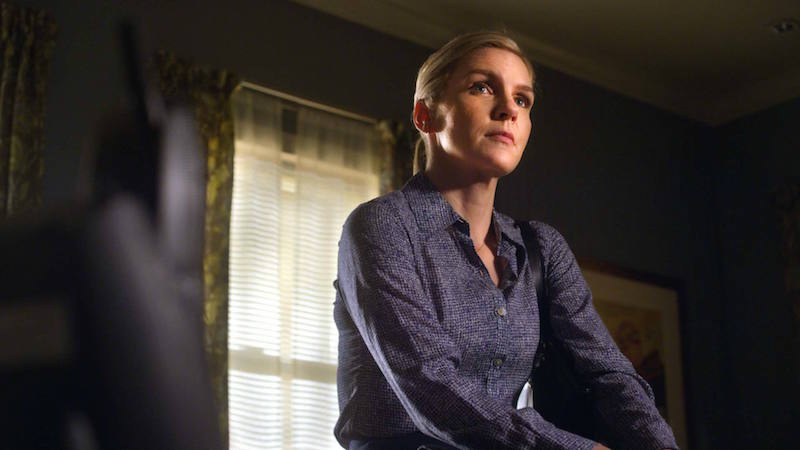 In “Bali Ha’i” (named after a South Pacific show tune Jimmy serenades Kim with on her answer-machine, in a silly but sweet attempt to get back in her good books), we’re once again presented with scenarios that seem to be pushing both Jimmy and Kim into ditching their well-paid jobs for something different. And while Jimmy’s fate is established, it was very interesting to see that Kim’s may be something more honest—as she was offered a job by Rich Schweikart (Denis Boutsikaris) of Schweikart & Cokely, who was impressed by her dogged nature at a court hearing HHM were never going to win in the on-going Sandpiper case. It’ll be interesting to see if Kim jumps ship to S&C, given how poorly she’s being treated at HHM right now, although the sequence where Kim ran another con with Jimmy on a guy she meets at a bar suggests she’s starting to see the appeal of Jimmy’s way of life. Or perhaps she just needed some fun and a release which Jimmy can readily provide, and will be sensible enough to avoid the path he’s fated to walk down. Mind you, if it was revealed that Jimmy started life as ‘Saul Goodman’ in partnership with Kim, that would be just the kind of surprise we need more of in this show. 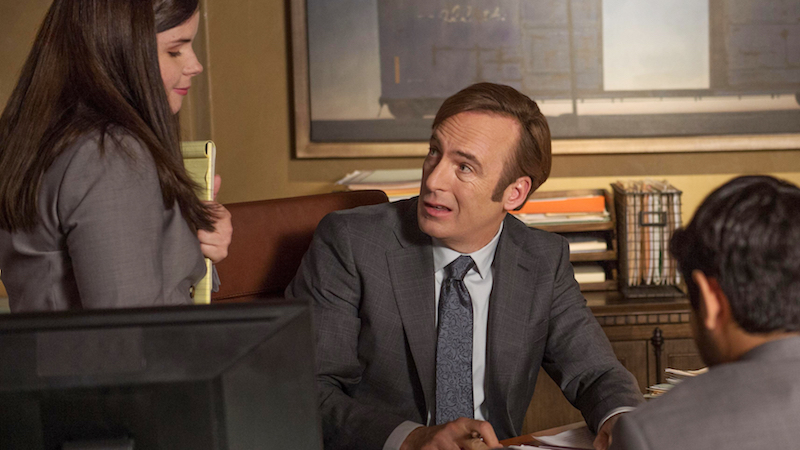 As I mentioned, and not for the first time this season, much of “Bali Ha’i” was focused on Mike and his dealing with local drug lord Hector Salamanca (Mark Margolis). Having refused an offer to change his story with the cops over his public fracas with Tuco, to release Hector’s crazy nephew from jail early, Mike found himself being intimidated by two of Hector’s goons. I loved the sequence where Mike got the jump on two guys hiding out in his house after dark, having been alerted to their presence thanks to a cool trick using carbon paper underneath a doormat.

Of course, one of the biggest delights of this hour was witnessing the return of two legendary Breaking Bad villains—Leonel and Marco Salamanca (Daniel and Luis Moncada)—the deadly, silent twin assassins. The shot of them perched on a rooftop, like gargoyles, peering down at Mike as he played with his granddaughter in a motel pool was brilliantly done—despite being somewhat laughable when you stop to really think about it. I mean, there’s a good chance Mike wouldn’t have ever noticed them high up there. 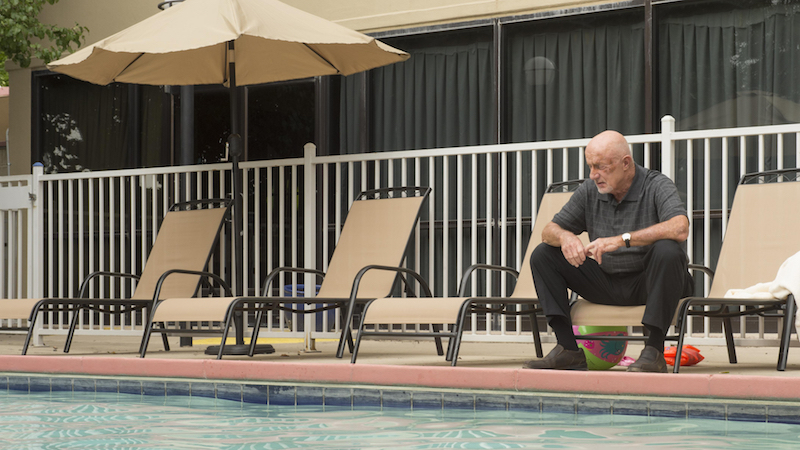 Unsurprisingly, Mike had little choice but to meet with Hector and agree to his plan, meaning Tuco will be back on the streets in a few years. Having managed to push Hector for $50,000 instead of $5,000, I also enjoyed the moment when Mike handed Nacho (Michael Mando) half his payout because he didn’t keep up his end of their agreement. It showed that Mike’s very fair-minded and professional about his work, and I think a street gangster like Nacho appreciated that—as it was clear he didn’t ever expect to get his $25k back. I have a feeling Nacho respects Mike, and they’ll perhaps work together again on a plan to keep Tuco in prison for his full sentence—perhaps involving why Hector’s crippled and the Twins are living in Mexico by the time Breaking Bad’s story begins in 7 years time.

Once again, we end an episode with our interest piqued by what’s happening with Mike, and a slight feeling of treading water when it comes to what Jimmy’s up. The symbolism of him breaking his company car’s cup-holder, so it can fit the cup he was gifted, suggests he’s still trying to make the best of a bad setup. I’m hopeful this won’t last, perhaps thanks to Mike needing Jimmy’s legal representation over what’s happened with Tuco.

Written By
Dan Owen
More from Dan Owen
As there are only three episodes left this season, “Trace Decay” came...
Read More