How could we ever forget the pensive kid with eyes so big they’d read your soul, from Spike Jonze’s underrated adaptation of Where the Wild Things Are (2009)? God bless Jonze for discovering the talented Max Records, and kudos to the young boy’s family for letting him grow up away from Hollywood’s glare, because now he’s back with a vengeance.

The now 19-year-old actor from Portland, Oregon, has grown into a handsome young man, sporting long grunge rock hair, yet those soulful eyes are the same. Records couldn’t have been a better fit to capture the complexity behind John Wayne Cleaver, the disturbed protagonist of supernatural horror, coming-of-age family drama I Am Not a Serial Killer.

It took Irish filmmaker Billy O’Brien a long time to get his creepy chiller made, ever since he acquired the rights to Dan Wells’s 2009 novel. Adapted by O’Brien himself and Chris Hyde, the film not only marks the return to the spotlight for Records but also features an outstanding supporting turn by one of Hollywood’s most underrated and underused actors of our time, Christopher Lloyd.

It’s Lloyd’s iconic role in Back to the Future that seems to have now affected his career path, thanks to showbiz’s infuriating tendency to pigeonhole talent, but here his subtle performance reinforces our admiration for the legendary actor and his range. It’s not hard to figure out the reasons behind his casting, as Records skilfully matches and even surpasses Lloyd with a nuanced turn as a young sociopath in the making.

John is an apathetic teenager who lives in Clayton, North Dakota–a small town where nothing ever happens. However, when a spate of gruesome murders shake the community’s mundane existence, things get “exciting” at long last. And while most people wouldn’t consider slashed corpses with a missing organ or body part something to get excited by, unconventional teenage hero John feels differently… 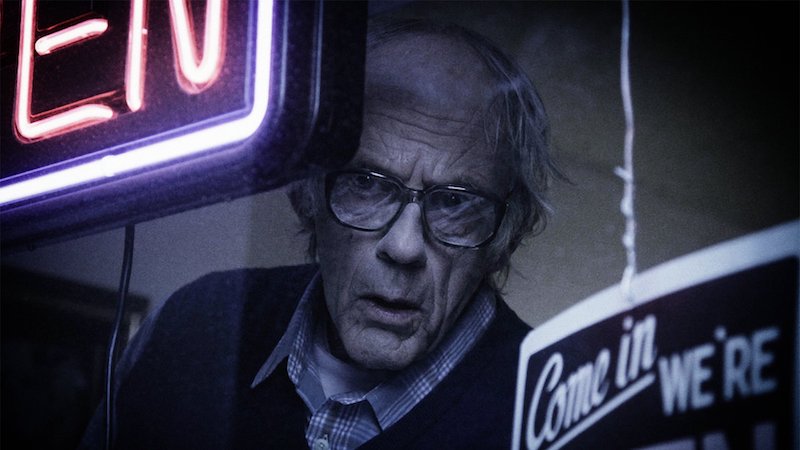 The son of the local mortician (Breaking Bad’s Laura Fraser), whom he usually helps with the family business, now that business is booming John has an opportunity to embalm bodies that need some serious work. However, his mum grows concerned with John’s well-being, since the boy, who’s already antisocial and fascinated by death, keeps writing school papers about famous serial killers and spends more time in the mortuary than with his only friend, Max (Raymond Brandstrom), whom he allegedly maintains a relationship with just to keep up appearances of normalcy.

According to his laid-back therapist, Dr. Neblin (Karl Geary), John has sociopathic tendencies but he keeps reassuring his adolescent patient that he’s a good person who’s in control and can prevent his darker instincts from taking over. But as John gets drawn deeper into an amateur investigation of the mysterious local murders, he seriously begins to question whether or not he’s on the path to awakening his own violent nature.

He tries his best to act normal, attempting to befriend Brooke (Lucy Lawton), a girl who’s interested in him, and helps out his elderly neighbour Mr. Crowley (Lloyd) and his wife with house chores, and even gets protective towards Crowley when he’s at risk of becoming the killer’s next victim. The closer John gets to the truth, though, the more disconcerting the reality of things turns out to be, as John realises supernatural forces may be at work.

Dark humour, teenage apathy, a pervasive sense of the macabre, and a few unsettling moments, make I Am Not a Serial Killer a very enjoyable experience. It’s a teen movie Dexter with the supernatural twist of Stranger Things, with a squeeze of Six Feet Under. Records does wonders with his portrayal of a disturbed teenager seeking acceptance, identity, and his place in the world and amongst his ordinary family. A less skilled actor would’ve jeopardised the character’s believability, but Records mesmerises with a convincing portrayal of a boy with no empathy. Lloyd is also wonderful, as Mr. Crowley’s emotional arc takes a meaningful turn and the veteran actor crafts a heartfelt character who’s very touching.

Despite a final act wrapping things up a bit too quickly, O’Brien has made a movie that remains faithful to the source material with a few welcome tweaks. I Am Not a Serial Killer has the potential to become a new cult favourite, and upon learning there are further entries in the adventures of John Cleaver, one can only hope that O’Brien and Records will manage to bring this darkly entertaining character back soon.