When Olympus Has Fallen (2013) was released, it was dismissed by many as a “Die Hard in The White House” and considered a mindless action film that covered no new ground. It didn’t help that a flashier movie with almost the exact same premise, Roland Emmerich’s White House Down (2013), premiered three months later and proved more profitable because of its star-power.

While Olympus earned lukewarm reviews, it hung around in the public consciousness more than White House Down, but its trashier and more xenophobic sequel London Has Fallen (2016) was almost universally bashed by critics and audiences alike. However, both movies were modestly successful at the box office (grossing $170M and $250M respectively), so it comes at no real surprise that a third instalment has arrived. What is surprising is that Angel Has Fallen might actually be the best of this trilogy…

Typically, high-concept action thrillers erode in quality over time as the concept gets stretched too far by too many sequels (see: the Taken movies). And with London Has Fallen feeling like a major step backwards for the series, expectations weren’t high for Angel Has Fallen. However, Angel delivers more action and has better twists, while also showing enough heart that even a few tough guys might get misty-eyed. 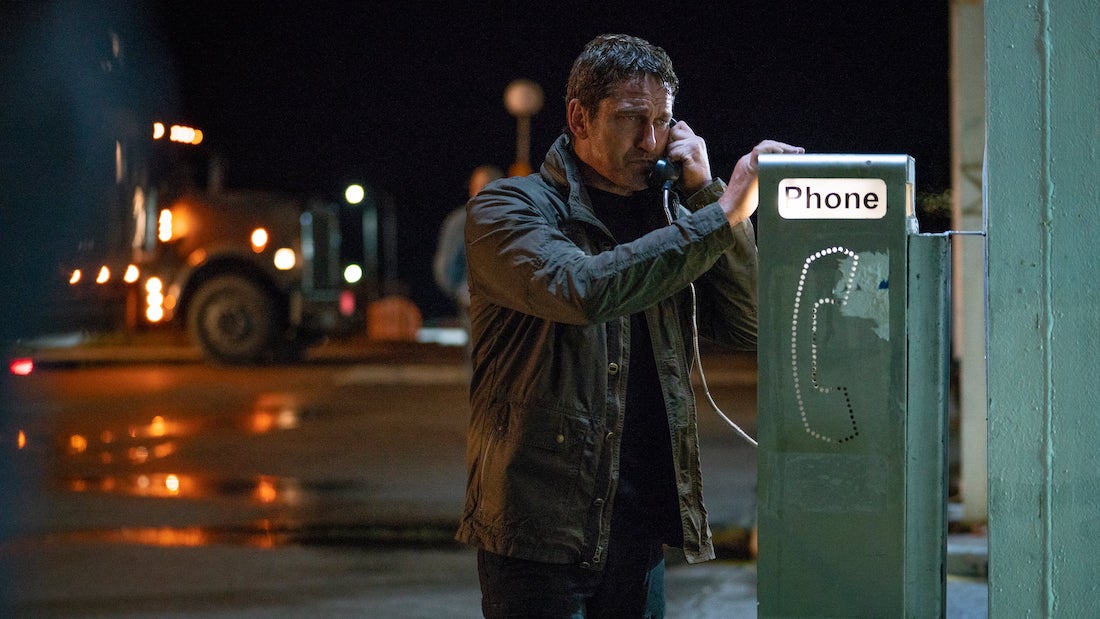 At the centre of the story once again is Secret Service Agent Mike Banning (Gerard Butler). Interestingly, the film doesn’t make any reference to Banning’s previous exploits, so anyone can walk in cold to the franchise and not feel lost. The beginning of the film finds Banning at a crossroads where the grind of his former military service and his years on protective detail for the Secret Service has begun to take a physical and mental toll.

In addition, the Director of the Secret Service (Lance Reddick) is planning his retirement and Banning is up for his job. In some ways, he would seem to be a natural fit and already has a tight bond with President Trumbull (Morgan Freeman), plus a motivation to take care of himself, wife Leah (Piper Perabo), and their young daughter. So, what’s the drawback? Banning can’t let go of the warrior inside, even after a lifetime of battles. As his friend and defence contractor Travis Cole (Frederick Schmidt) puts it, they’re “lions” born for war. It also doesn’t help that Banning has developed a pill problem he hasn’t gotten around to telling his boss about yet… 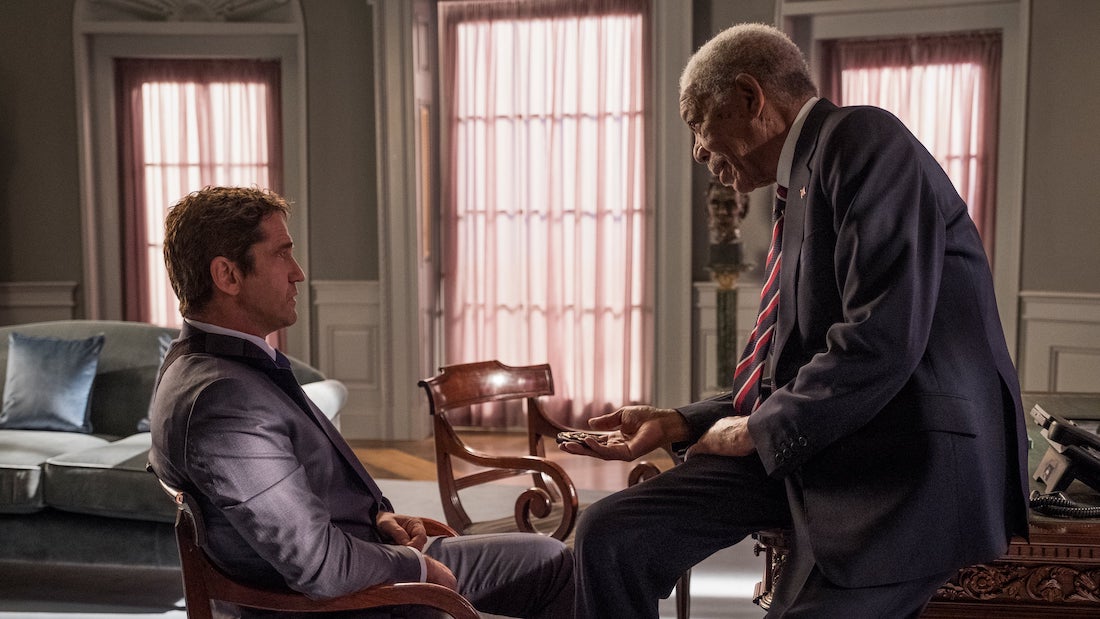 This is where, surprisingly, Angel Has Fallen has more to say than your typical shoot-’em-up blockbuster. Real-life themes such as painkiller addiction and PTSD are addressed and become critical factors in character development. Stuntman-turned-director Ric Roman Waugh (Snitch) takes a chance by giving these themes more than just a courtesy pass. Through Banning’s complicated relationships with Cole and his estranged father (Nick Nolte), Angel Has Fallen tries to dramatise the real consequences of a lifetime of service, even if the action sequences remain OTT to the point of cartoonishness.

Waugh should get credit for not seeking the easy way out and simply following tired story beats and cookie-cutter plotlines. While the result does lend the film a bit more depth, Angel Has Fallen does feel uneven at times—vacillating between the emotional weight Nolte brings to his role, versus the B Movie villainy of Schmidt. Overall, the merits outweigh its flaws. 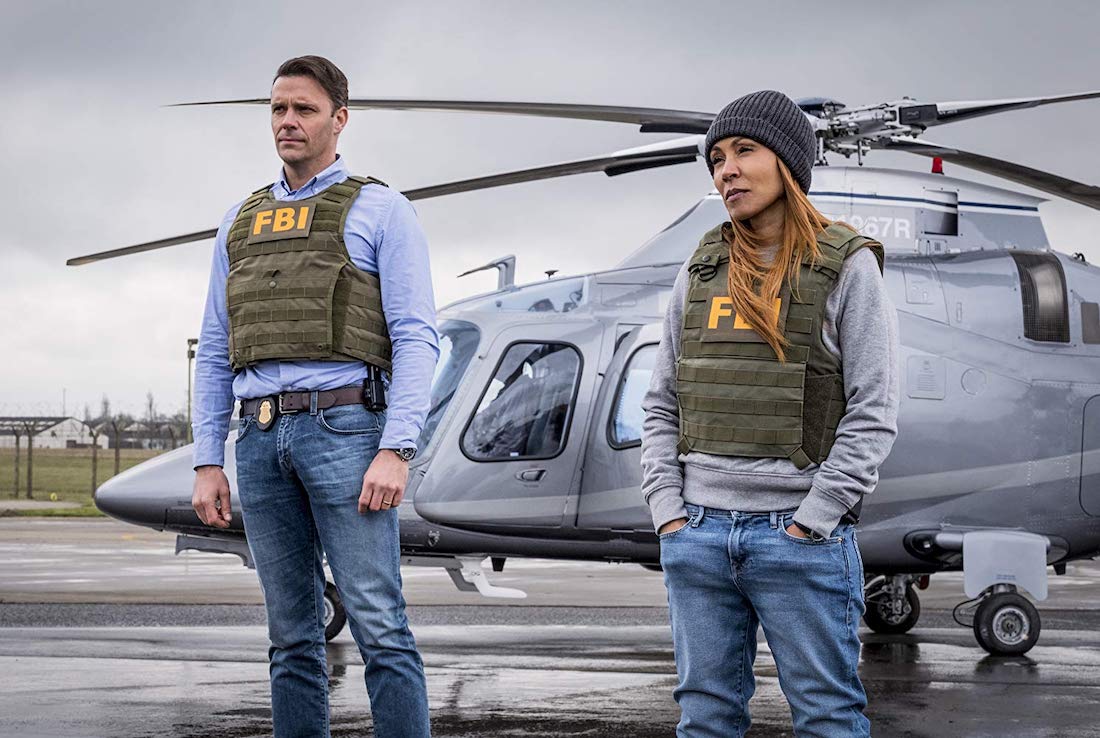 The dynamic between Butler and Nolte is critical and provides both laughs and a nice kick in the gut. To his credit, the veteran actor and three-time Academy Award nominee Nolte delivers every line like this could finally land him an Oscar! He doesn’t cheat the filmmaker or the audience for one second and his performance helps launch the story into a grand finale.

Banning is set up as the fall guy for a shadowy group trying to kill the Commander-in-Chief. Those pesky villains take not one, but two big swipes at it with a finale full of VFX explosions and bullet-ridden bodies. It’s what the audience should be expecting when they buy a ticket for this, but what they get in-between is better than one might expect.

Angel Has Fallen is an enjoyable time with a lead character given some welcome depth. Unfortunately, the villains lack the same level of development and feel like a clumsy collection of clichés most of the time. But the movie isn’t about them, it’s about Banning… and Butler seems to relish another opportunity to not play this character and explore new ground with him. Although the core premise of this franchise requires an assassination attempt on POTUS, this time that plot is less of a focus and merely the background problem for the final showdown. 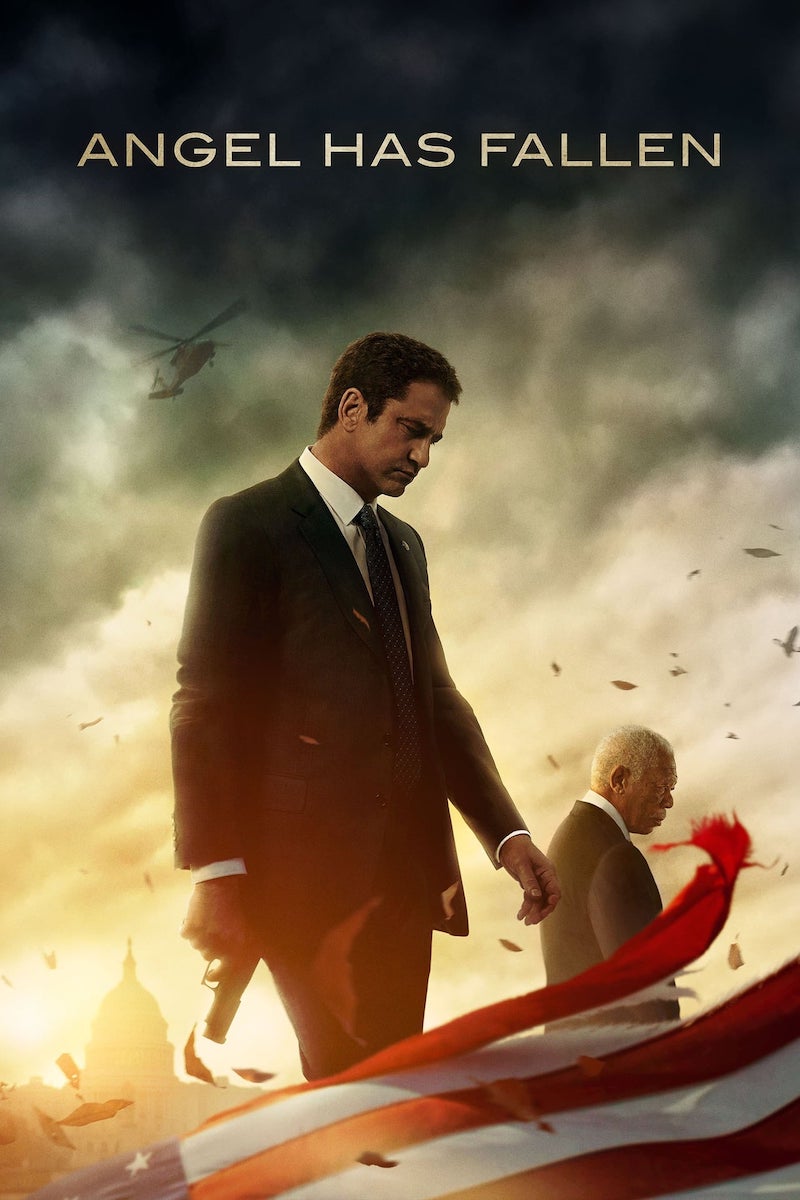